I’m back with a bathroom update! I didn’t forget about it, I’ve been sloooooowly working on it this whole time. Last time I updated y’all on the bathroom it was APRIL (holy cow) and I showed you the finished dresser turned vanity. Well, here is what it looks like today! 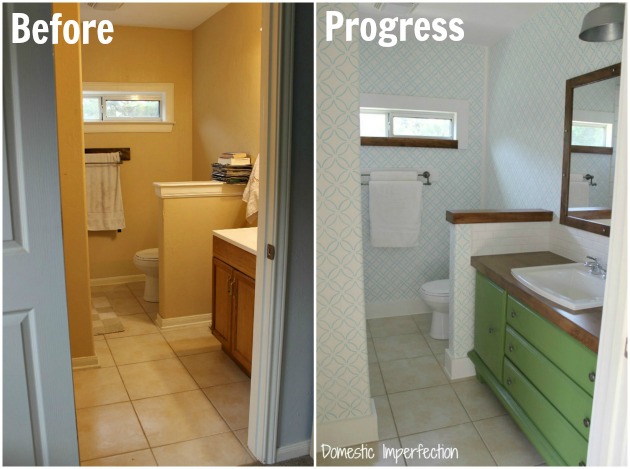 Yup, I stenciled it. We obviously did other stuff too, but this post is about the stenciling.  It took    f-o-r-e-v-e-r-, but it looks awesome.

So lets dive right into the details…

First I painted the bathroom white from tan. 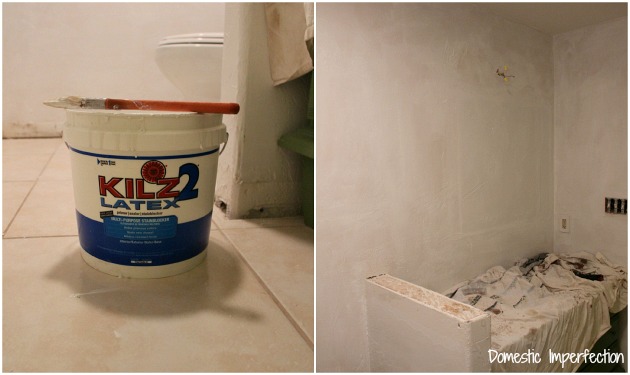 I used Kilz to put a few layers of primer on it first, mainly because it’s a great primer AND it’s so much cheaper than regular paint. Then I finished it off with two coats of bistro white from Valspar. Painting things white always seems to take a ton of coats.

(On a side note, have ya’ll ever been in a bathroom without a mirror? It’s weird…way weirder than you would expect. You don’t realize how many times you look in the mirror without thinking until you look catch yourself constantly glancing at a patchy white wall expecting to see yourself.)

I chose the Fuji allover stencil from Cutting Edge Stencils as my design, it matches the design on my the quilt that I bought for my (attached) bedroom, and it’s subtle. I didn’t want an intense stencil mostly because I wanted to use turquoise paint, and I was planning to do every wall in the bathroom. The likelihood of the bathroom looking crazy was already high, better to stay on the safe side. 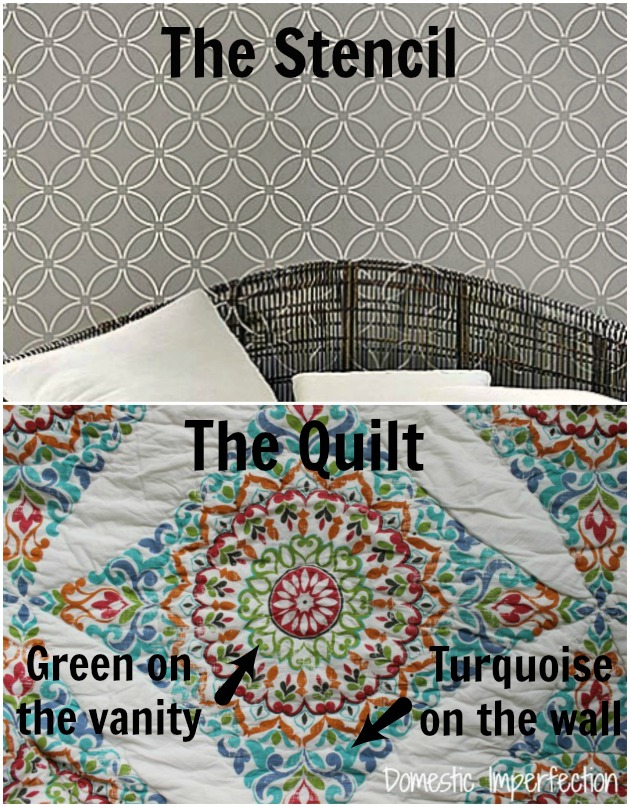 I decided to try something different stenciling-wise… instead of using paint I would use a sharpie. I wanted to try this because when I stencil I have to stop and start constantly. I’ll start stenciling and my kids will need something, so I’ll have to stop, clean my roller or brush, get the kids whatever they need (or play with them, cook something, clean up a mess, break up a fight…) then I start over only to have to clean out my roller again five minutes later. So I thought it might be nice to just cap a sharpie as cleanup. Also, sharpie stenciling would look PERFECT. I quickly discovered sharpies didn’t work…they just aren’t wet enough. Fail #1.

Plan two – paint pen. I was sure I was a genius. I bought a couple from Hobby Lobby for 2.99 a pop and started stenciling. It was great…it went fairly quickly, was clean, and looked like perfection. Then, when I was about halfway through ONE STENCIL my paint pen dried up. Not good. I did some quick math in my head and figured that it would cost me nearly $100 to stencil the entire bathroom with a paint pen. Dang it. 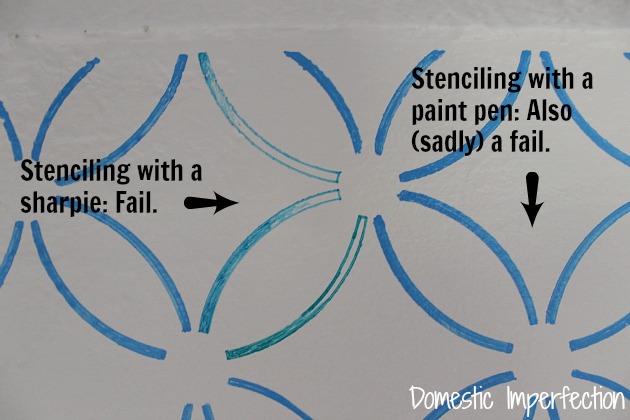 Plan three – Mix up some of my own paint from leftovers and roll it like normal. I mixed my paint (free!), taped my stencil to the wall, and rolled it. It went so quickly! Then I removed the stencil and it looked horrid. I forget to take a picture, but we have very dramatic texture on our walls which makes stenciling really difficult. This was fine when I did the birch forest stencil in my hallway, but the fuji stencil isn’t as forgiving. So I painted over it again.

Plan four – Use the stencil brush. 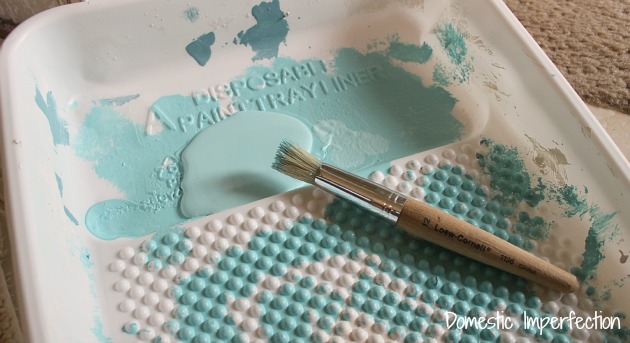 This takes WAY longer than rolling but is much more precise. You dip your brush in the paint, dab it off so there isn’t too much, and tap it onto your stencil. I also decided that I hated the previous turquoise paint I mixed and went and bought “pure turquoise” from Behr (Home Depot) mixed at 50% strength. 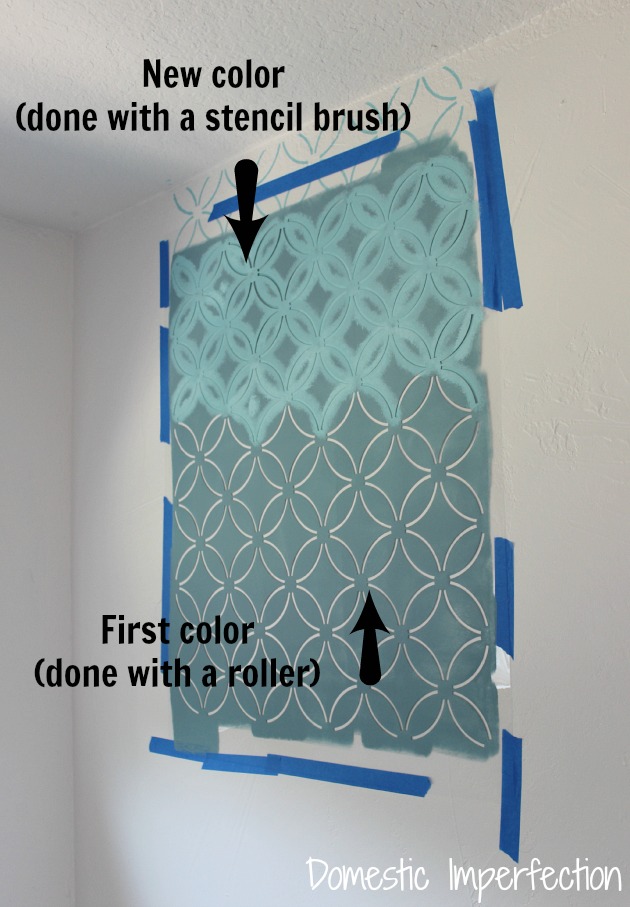 And then, I stenciled. For hours…for days…for forever.   And I was almost done with the first wall. 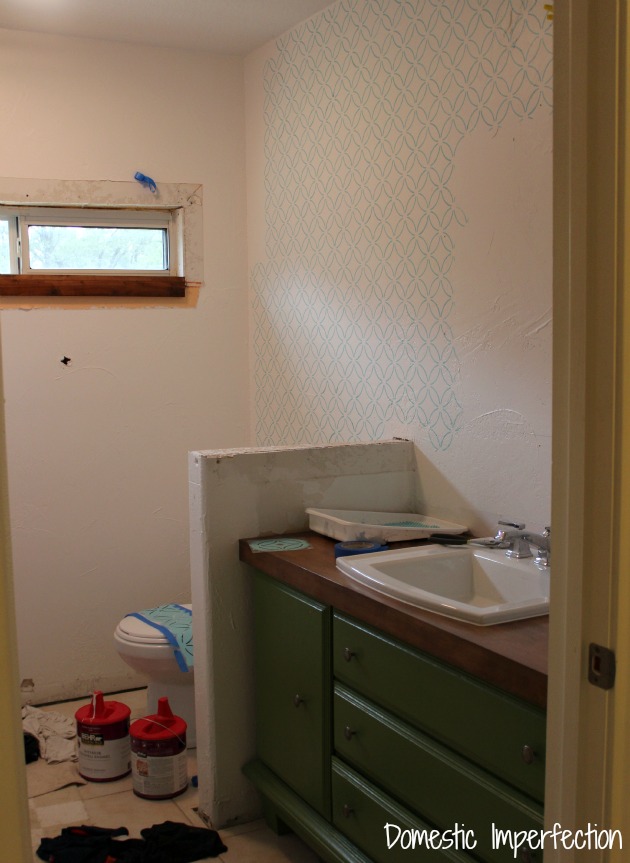 I sent that above picture to a few friends to see if I could get away with just stenciling the main wall, or if they thought I had to stencil the whole thing. Everyone said the whole thing, and one of them (Kelly) compared stenciling to childbirth. She is totally right, both are painful and terrible while you are doing it, but as soon as it’s over you love the result so much that you forget about all the horribleness and want to do it again.

(Well sorta, I still shudder when I think about my 33 hour almost drug free labor with Elijah.)

And so, I stenciled on. 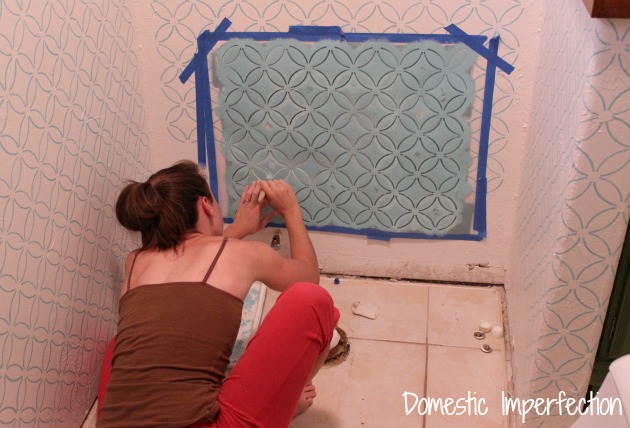 Stenciling flat walls isn’t so bad, really, but corners are the worst. I tried to bend the stencil into the corner, then when that didn’t work I took a little brush and tried to hand paint them in, but those looked all distorted and ridiculous. I cursed my corners and wished I didn’t have so many in my bathroom. Then I thought “Screw it, I’m just going to skip the corners.”  The second I decided just to leave them blank I felt better. I took a deep breath. I swear the air smelled sweeter than it did a second before. Suddenly my arguing kids sounded fairly cute rather than painfully annoying. A butterfly landed on my shoulder. Life was good. 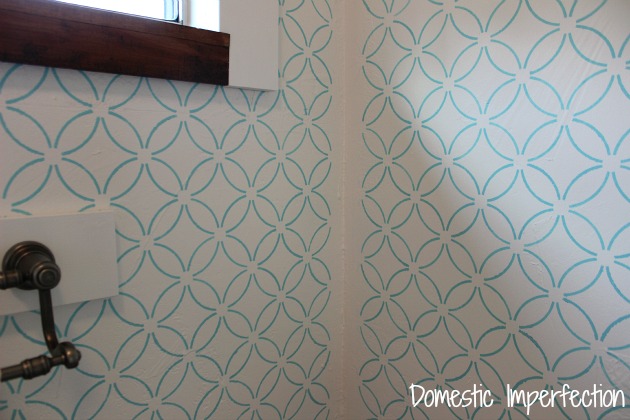 After I finished stenciling (hooray!) Adam put in new trim & doorframes, then he made a small countertop for the half wall and a sill for the window (same way he made the maple flooring countertop). And since I had already made all the mistakes possible the first time around staining and sealing them was flawless this time. Then we painted the doors, trim, ceiling…then I caulked everything and basically did a ton of stuff that no one wants to read about but is really important. 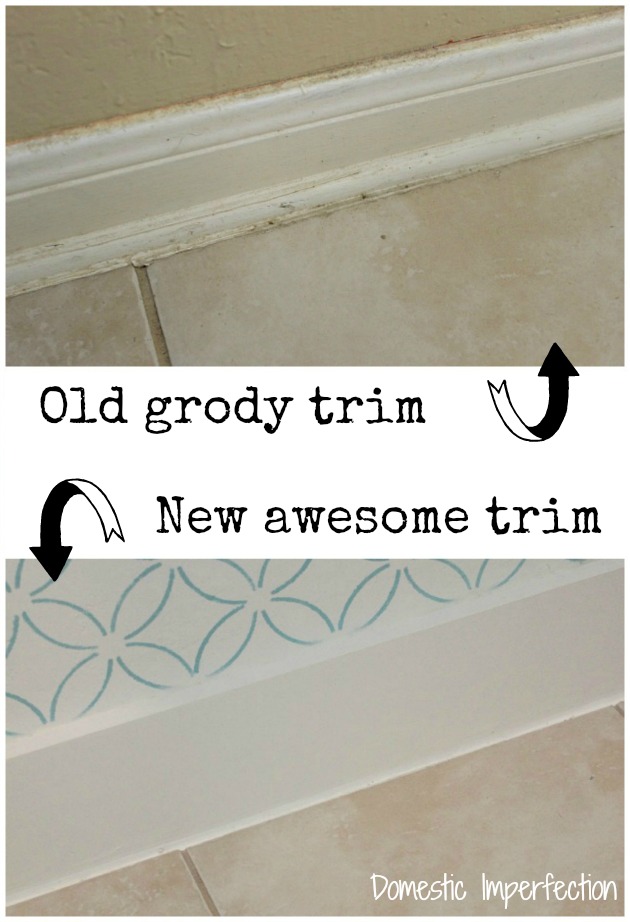 The new awesome trim, in case you’re wondering, is a 1X6. That’s it, just a board. Cheap, simple…perfect.

Here comes the part where I bombard you with “after’ (ahem, progress) pictures… 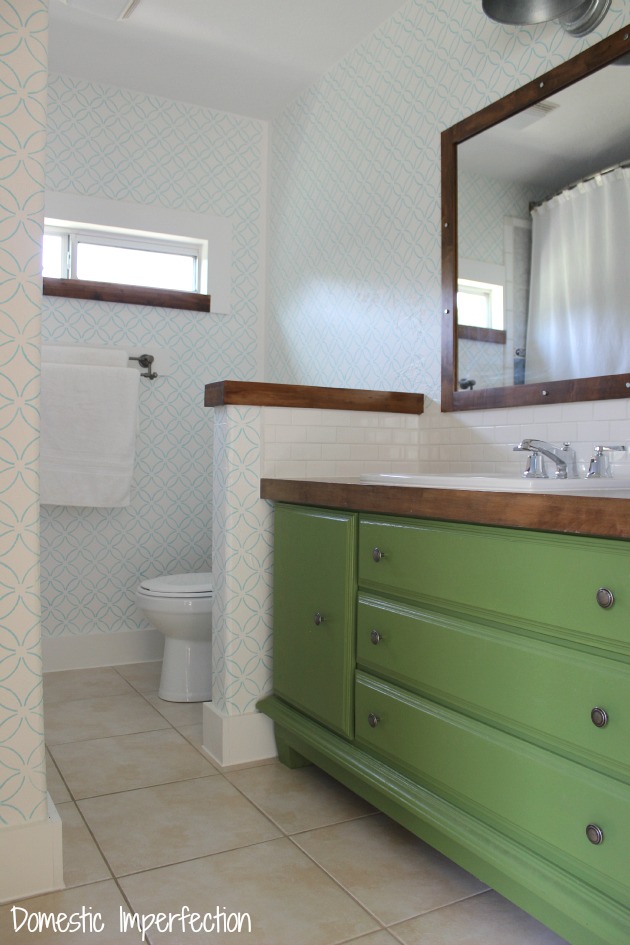 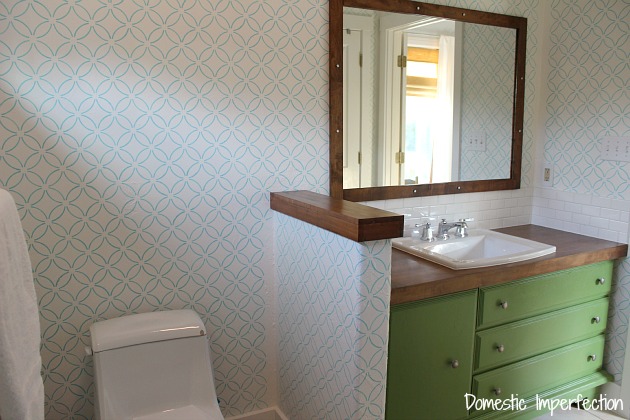 (I have some cool DIY shelves planned for the blank spot above the toilet.) 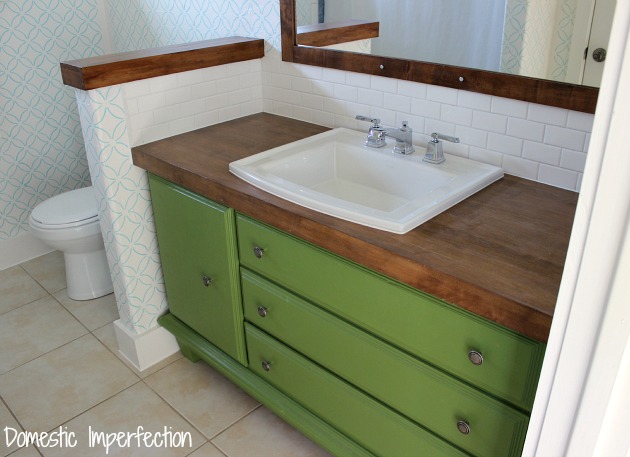 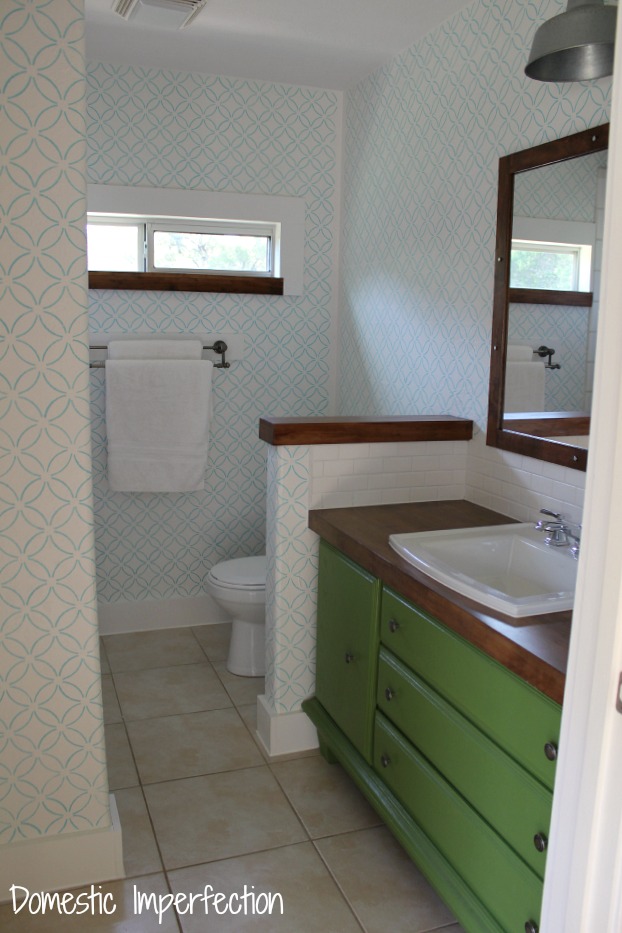 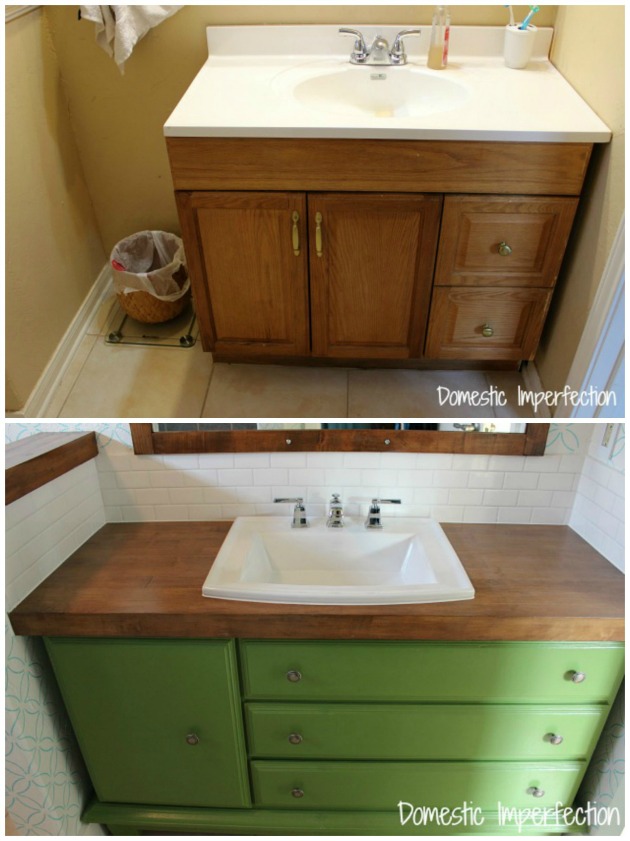 In the next couple posts I’ll be sharing tutorials on the mirror, light, and backsplash. 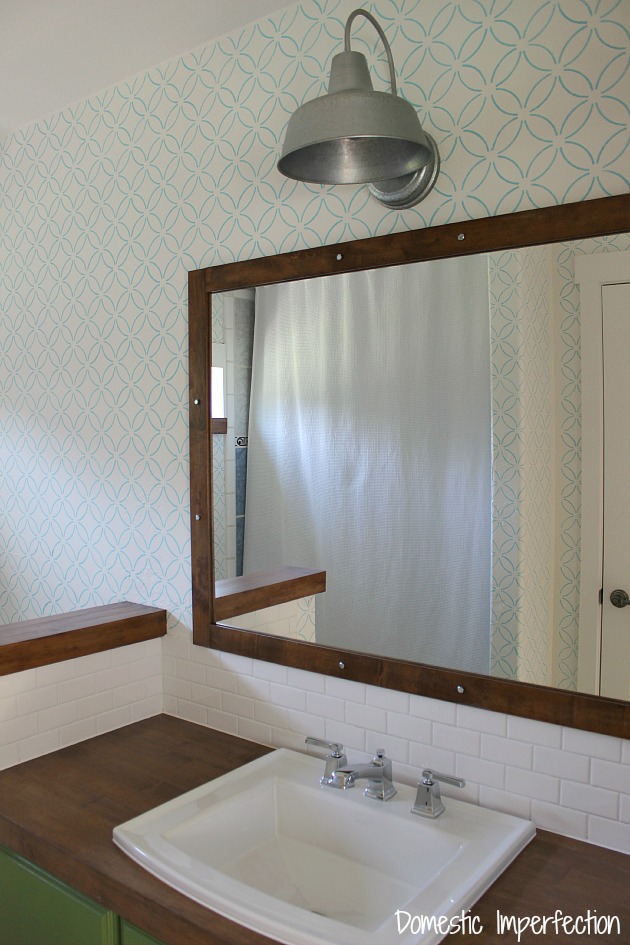 After looking at all those beautiful, clean, perfect bathroom pictures you might be under the false impression that I have my crap together. Allow me to remedy that and take a picture of what lies just beyond the bathroom… 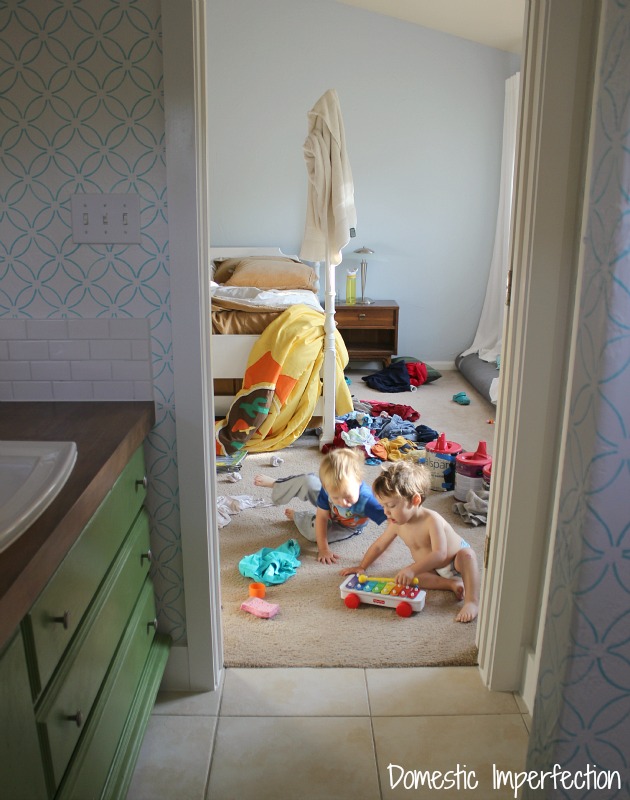 * I received my stencil free from Cutting Edge, but all opinions about the product are (as always) 100% mine. Obviously…it’s not like they asked me to compare using their product to childbirth, haha.