There is an awkward little hallway that leads to my master bedroom. Actually, calling it a hallway is quite generous…it’s really just a wall that blocks people from being able to see our bed from the street. That probably doesn’t make much sense, so allow me draw you a (horribly inaccurate) picture. 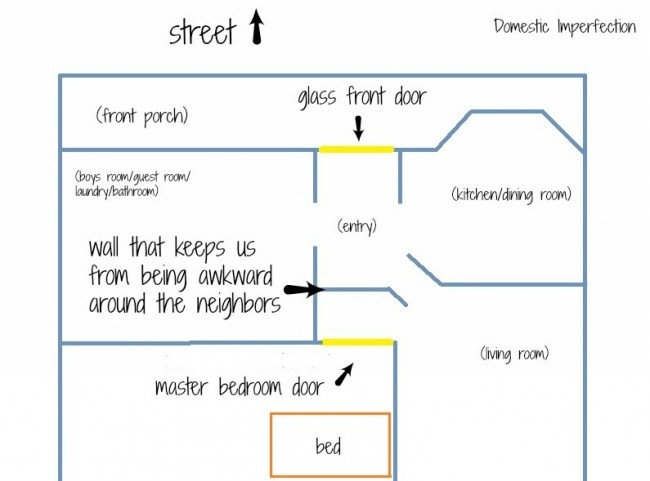 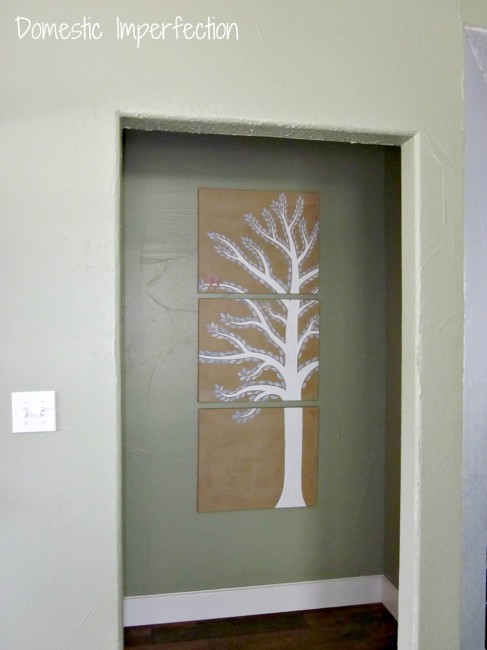 It’s a small space which means I’m free to go as crazy as I want with it. Did y’all not know that rule? The smaller the space the bolder you can be. Okay I made that rule up, but I think it’s a good one. So I wanted the hallway to ‘pop’ a little, while keeping in mind that you can see it clearly from all the main parts of our house. It may be small, but it still has to mesh. Usher in the Birch Forest stencil from Cutting Edge. I’ve liked this stencil since I saw it in Jen’s  playroom over at I Heart Organizing. 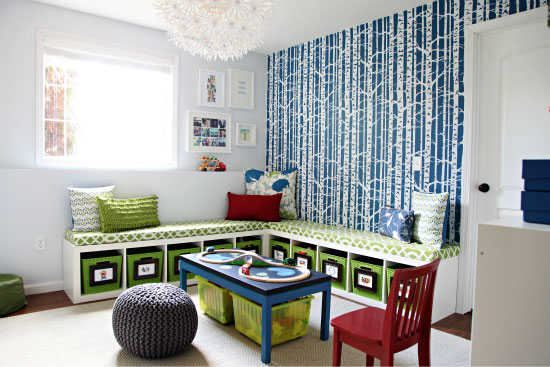 Forget the stencil, that whole room is awesome. Seriously, go check it out if you haven’t seen it.

I ordered my stencil and when it came in I excitedly got right to stenciling  This was my first time to stencil a wall, up until now I had just stenciled furniture (in case your curious, stenciling furniture is waaaaay easier.) So I did a couple of rounds and stepped back to admire my work, and when I did I thought it looked…off. 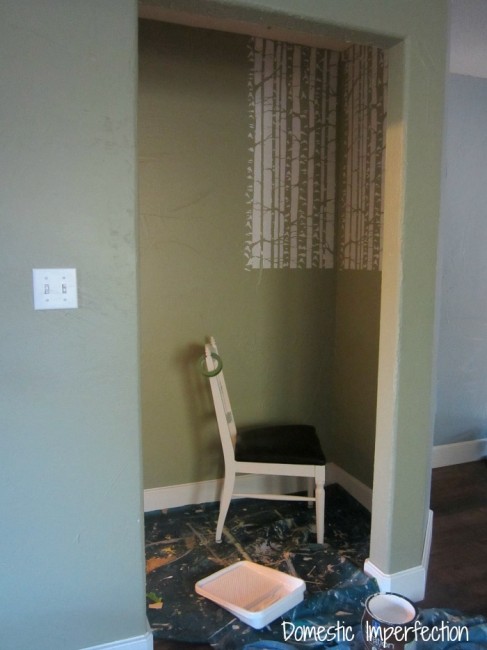 The trees were green and the background was white. That’s not what I wanted, I wanted white trees on a green background. I tried to tell myself it was okay and would look just fine when it was all finished, but I couldn’t bring myself to keep stenciling. So it stayed like that – dropcloth and all – for about a week. Adam really wanted me to hurry up and finish it, so he told me stories that went something like this – “Imagine a forest at dusk, the snow is softly falling and the remaining rays of sunlight reflect off the snow and make the forest seem bright and the trees appear shadowy and dark…” They were beautiful stories really, but we both knew they were total BS. I KNEW he agreed with me but I was never going to get him to admit it. He just wanted me to hurry up and finish.

Being an intuitive and obedient wife I did what he wanted me to do –  I waited till one day when he was at work and the kids took naps at the same time (!!!) and I painted the whole dang thing white. 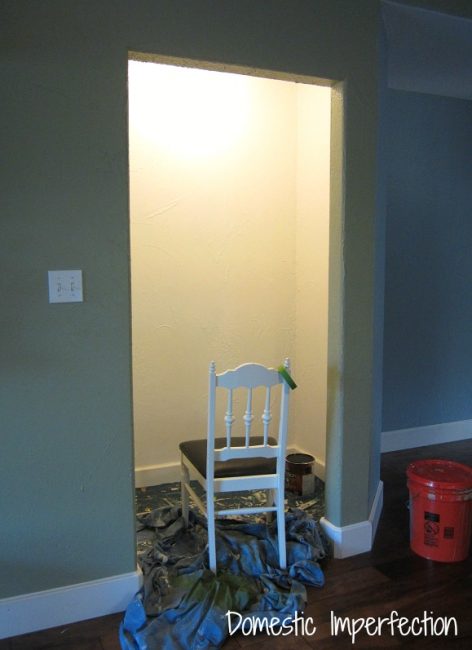 The easiest wall to stencil is a big flat one without any windows or doorways – I chose to stencil a tiny pentagon with multiple doorways. It’s my own stubborn fault for it taking forever. I’m really glad this is such a forgiving stencil though, because I ended up painting all my corners by hand. 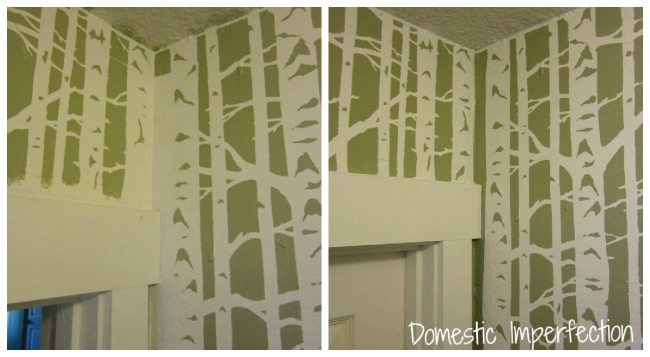 The finished hallway was totally worth it though, I think it’s really fun without being overwhelming. 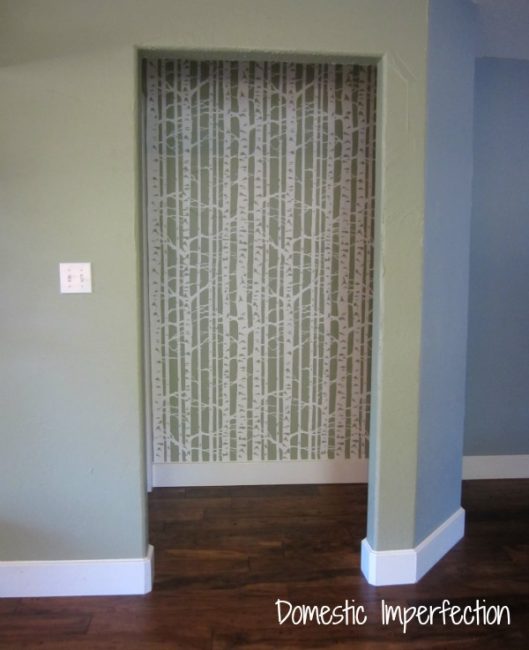 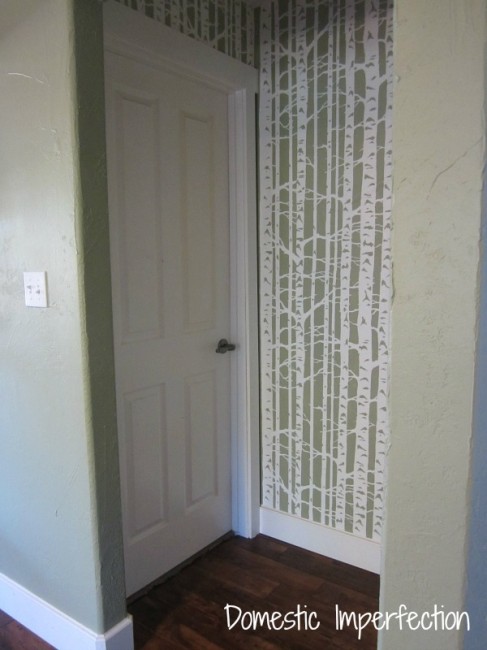 That cheap boob light is getting the ax next, once I find all the pieces I need for the DIY light fixture that I’ve already made in my head. 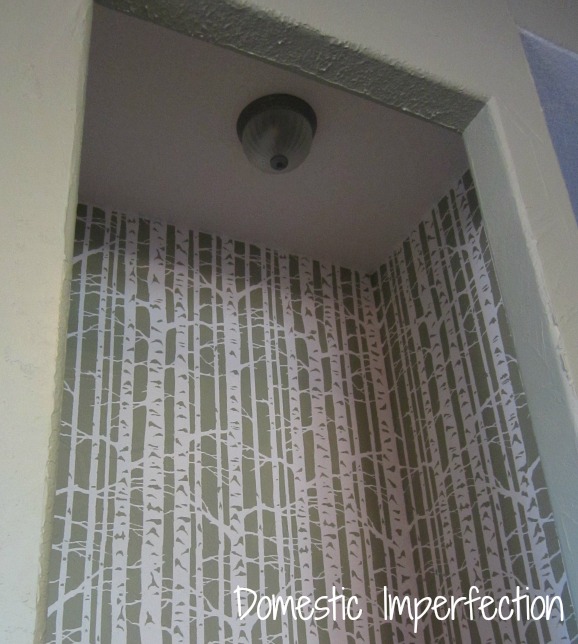 I obviously need some decor or something in here, but that part I don’t really have any ideas for. Suggestions are welcome! I would love to make it useful, but we don’t need shelves and it’s not big enough for much else. 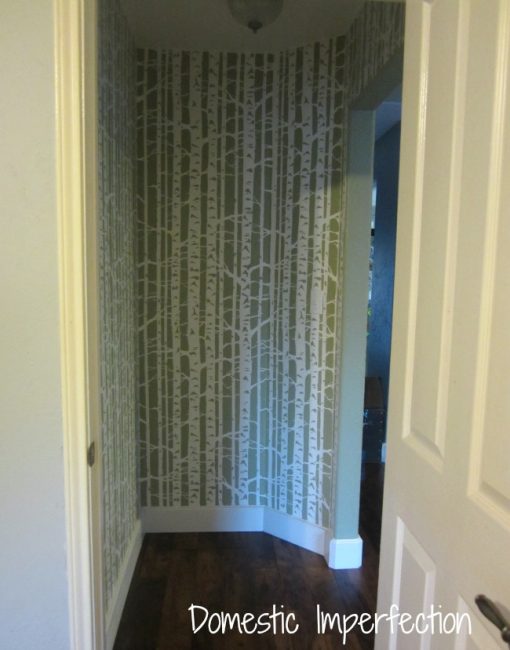 Okay, so I actually did have one idea. Since it’s a birch forest I thought we might build a tree house, for the boys to climb on and hang out under. Allow me to draw you another picture… 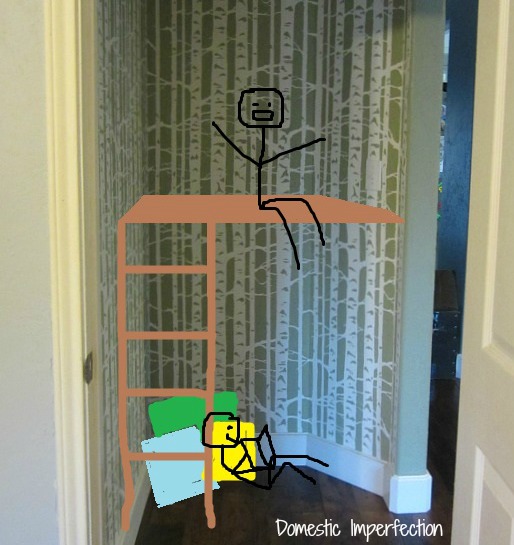 Brilliant, right? Except that it would be about a foot deep so it wouldn’t work. Also, my boys would probably just take turns pushing each other off and I am kidding myself to think they would sit quietly underneath and read books. It would have been fun though, and Jen’s playroom would have had some serious competition for the best birch forested playroom in blogland. Ha!