Is there anything more satisfying than crossing a big item off your to-do list? Well, yes, there is…but crossing things off my to-do list is pretty high on my list of things I love.

Building bunk beds has been on our to-do list for a really long time. That’s not the bad part though, the bad part is that I made the mistake of telling the boys about our bunk bed plans before anything was actually in the works. Newbie parent move, I know. Never again.

As an example of their excitement, here is a little story. Seven months ago we made these lights… (more info here and here)

The boys and I went to Home Depot to buy supplies, which mostly consisted on small square dowels. The woman who checked us out was talking to the boys, asking them what project we were doing, and Elijah excitedly shouted “Mommy is building bunk beds!”.  She paused and looked  at me with a quizzical, somewhat judgmental look, and I assured her that my son was wrong and I was not planning to construct bunk beds out of a cart full of tiny square dowels. So yeah…I have some excited (and very patient) boys.

Adam had his heart set on building the beds…he said it would be a big (but simple) weekend project. I was totally on board and have been collecting bunk bed pictures as inspiration. We had this whole plan to build them with only two tools and write-up a “you can do this!” tutorial. It was going to be awesome, helpful, and budget friendly…the best kind of post. 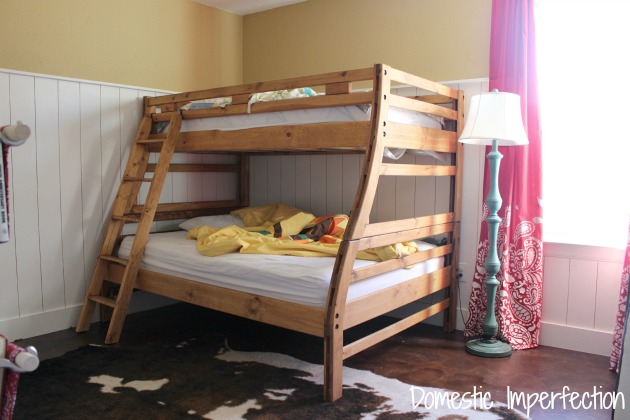 So one day last week I was thinking about finally setting aside a weekend to build beds and honestly, I was kinda dreading it.  I jut wanted it done and didn’t want to do any of the work. I didn’t want to build them, I didn’t want to write a tutorial post, I just wanted them to magically appear and be able to stop thinking about them. So I jumped on Facebook, searched through all my local garage sale groups (so much better than Craigslist!) and found the perfect set. A few hours later I had $300 less to my name, a finished bunk bed project, happy kids, and a husband with crushed dreams of handmade furniture.

I am going to hold up my end of the deal and write a tutorial though, so here we go…

Step one – Agree to buy bunk beds off of Facebook having only seen a tiny stock photo. 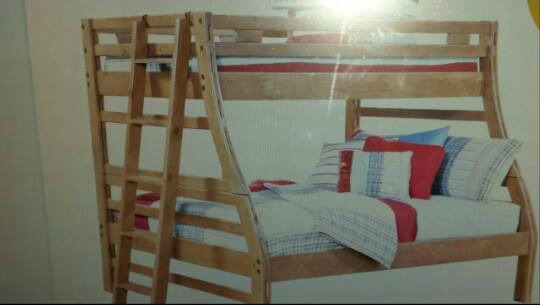 Step Two – Pick up, pay for, and haul bunk beds home. Enjoy the excited disbelief of your children as they realize that this bunk bed thing is actually happening. 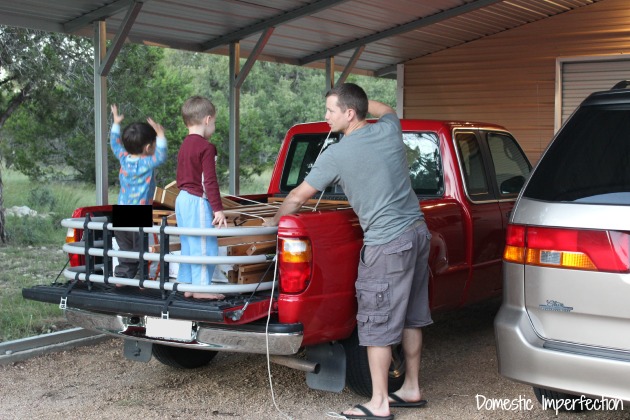 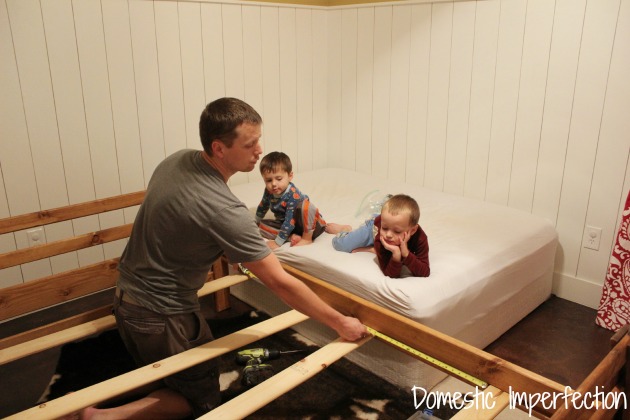 4. Put the kids to bed and sit on the couch watching Parenthood, eating coconut ice cream and congratulating each other on a job well done. 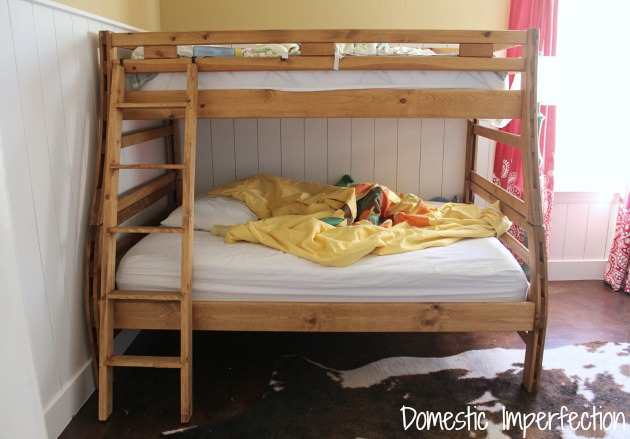 There it is, a true “you can do this!” tutorial.

Anyway, I love the beds. I like the wood and the color, and the curve and the side (which isn’t something we could have done) and the removable ladder. They feel really huge after just having a mattress in here for so long, but I really wanted a twin over full so that they can both sleep on the bottom if they want, and Adam or I can sleep in there when they’re scared or sick. And since there isn’t any other seating in the room, it’s nice the we can sit on the edge of the bed without ducking or banging on heads on the top bunk. Sometimes those Danny Tanner heart-to-hearts are just better when you’re able to sit up straight.

Now that we have that big item crossed off the to-do list, the next task is to get bedding. Poor Elijah doesn’t even have sheets yet, just a blanket and a waterproof mattress protector (which is really the most important part!)