I’m back from my mini beach vacation and wanted to show you our finished fence! It was actually finished a while ago, but I’m not organized enough to get posts out in a timely manner. I’m also not organized enough to line up guest bloggers or schedule posts for when I’m gone, evidently. However, with a name like Domestic Imperfection I think I should be granted a little leniency :)

So it turns out, projects get done really quickly when you hire someone to do them for you.  Our entire fence was done by two men (a father/son team) and was finished in four days. FOUR!  That’s saying something, because we live on solid rock and it’s impossible dig a hole without a giant air compressor/jack hammer chattering your teeth out. I don’t even want to think about how long it would  have taken us to do this ourselves.  We would have worked our butts off and it would  have turned out crappy. Reals crappy.

Another bonus to hiring it out was that Elijah loved watching them work. They wore cowboy hats, so every morning when they would pull up Elijah would yell “COWBOYS! Mama cowboys! Horse?” Then I’d have to tell him that they didn’t bring their horse today, luckily he was too excited about the cowboys to be disappointed about the lack of horses.

So when I got a quote for our fence I told the cowboys, “ranch style fence, T posts are fine, cheap as you can do it.”  They gave me a quote that I thought it was pretty good, so I hired them. About two weeks later they started building our fence…except it was looking nothing like what I asked for.

It was WAY nicer. WAY.

I bet that’s not what you were expecting me to say :)  I was surprised myself…I mean, when you don’t get what you asked for it’s usually because your disappointed. These guys cemented in poles, welded gates from scratch, sanded and painted the posts (three coats!) and the wire is strung so tight you can’t even wiggle it.  My homes resale value is very happy.

One of the main reasons for getting a fence was to keep the deer out.  The deer here aren’t like normal deer. Normal deer are somewhat rare to see, kinda scared of people, and when you see one you get excited and want to take a picture. The deer here are small, scraggly, and WAY overpopulated.  DROVES of deer go through my yard each day, eating everything in sight.  The is no such thing as a deer proof plant around here…they eat my “deer proof” Lantana, they eat my herbs, they even eat my aloe vera.  Now that I have a six foot fence, I can plant anything I want. I don’t even know where to start, I’ve never had that sort of freedom…a garden is in store for sure!  Also, the deer here are not scared of humans in any way, and they get fairly aggressive when their fawns come (and pretty dumb during the rut). For example, last year we had one doe in particular that lived in a cedar grove near our house, and she would go on the offensive whenever Pretzel (our dog) went outside. On multiple occasions she attacked Pretzel and a  few times I thought she was  might attack me. Anyway, one day Pretzel is outside and I hear her yelp and then go running by the bay windows in our dining room, closely followed by the deer. They sprint around on my front porch for a while and then Pretzel smooshes herself up against the front door, screaming in fear, with the deer attacking her. So I grab my broom and fight off the deer (which is not in the least bit scared of me) then go to comfort Pretzel and see that in her little doogy terror she has literally pood herself, all over my welcome mat. She was fine, BTW, though it took a lot of coaxing to get her to go outside for a while.  Point being, having a deer proof fence will keep the same thing to happening to one of my boys.

So here are some pics of our completed fence, which also make for some pretty gnarly backyard before pictures. We really have our work cut out for us…fortunately we have 100+ degree weather to comfort us as we work. 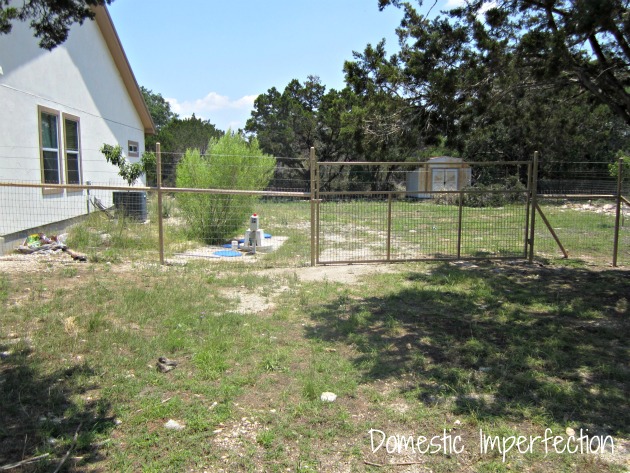 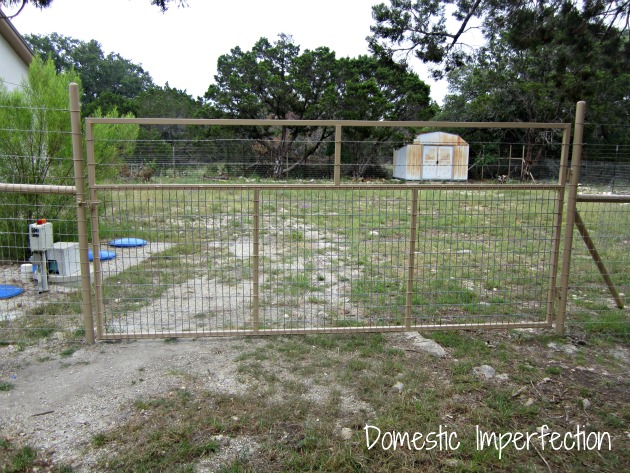 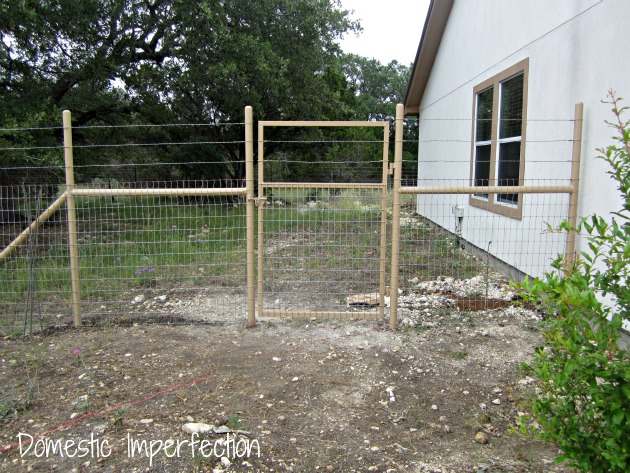 This corner here, on the front right hand side of the house, is where I plan to put a garden. 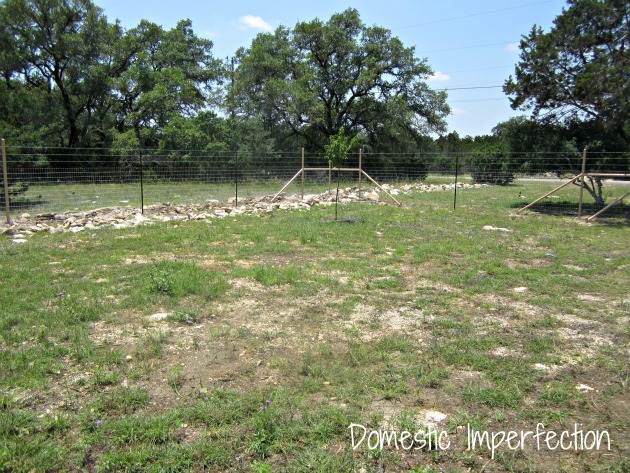 The garden will have to consist of raised beds, because we seem to have a bit of a rock problem going on over here… 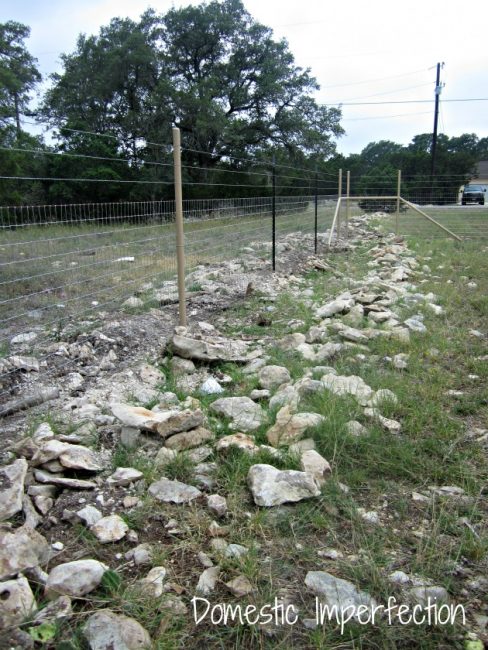 A garden in that corner serves double duty, one as a garden (obviously) and one as a distraction from the abandoned crack house next door… 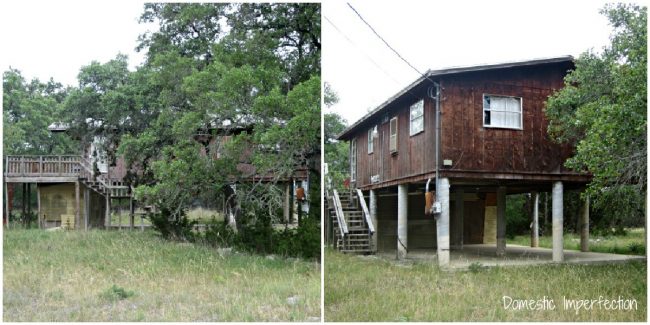 Under this gianormo oak tree (left side of the house) we are going to do some sort of patio and seating area. 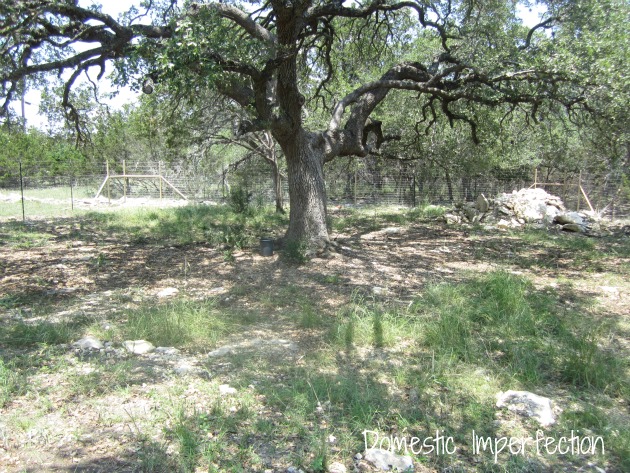 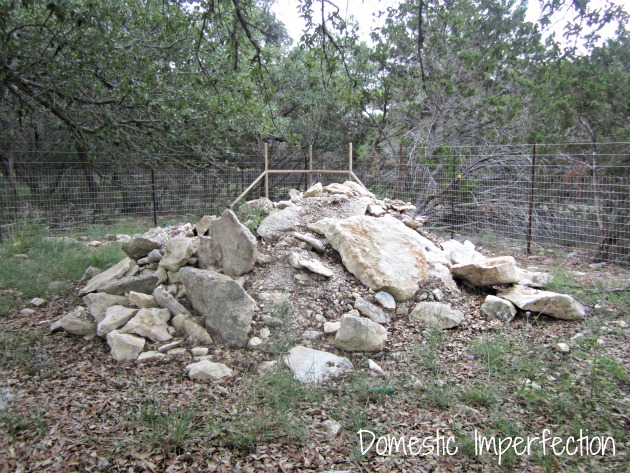 Elijah is going to be disappointed, he loves to sneak off and climb it. I would normally be all for him exerting energy in any and every way possible, except that I’m pretty sure this particular pile is full of snakes. Adam seems to think it’s all in my head, but for my sanity, it has to go. How? I have no idea.

Also, this weed bed outside the master bedroom may be in need of some attention… 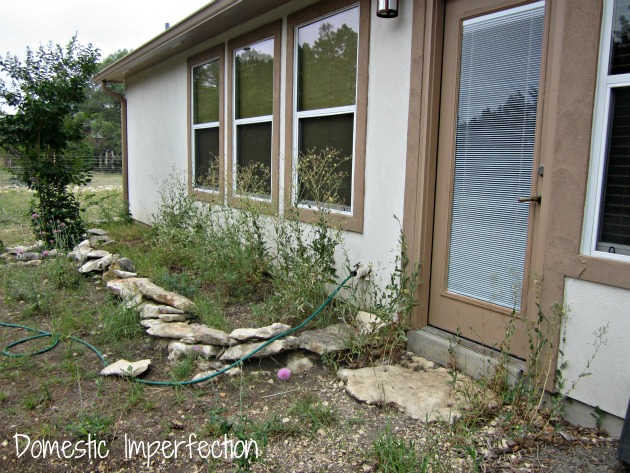 And our partial patio is in a very sad state. 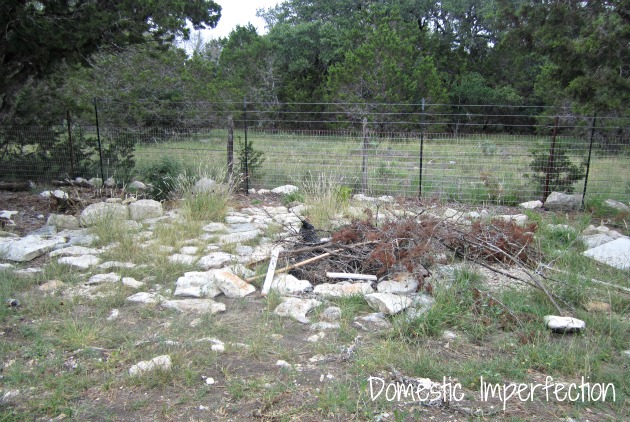 I fully expect the backyard to come along very slowly, simply because it is just to dang hot outside to work unless it’s really early morning, really late evening, or not summer. I’ll keep you updated though, I think I’ll start with that weed bed because it’s the easiest and probably doesn’t involve snakes.

We’re also about halfway done with a really big, really needed outdoor project that I can’t wait to tell y’all about! Any guesses as to what it is?