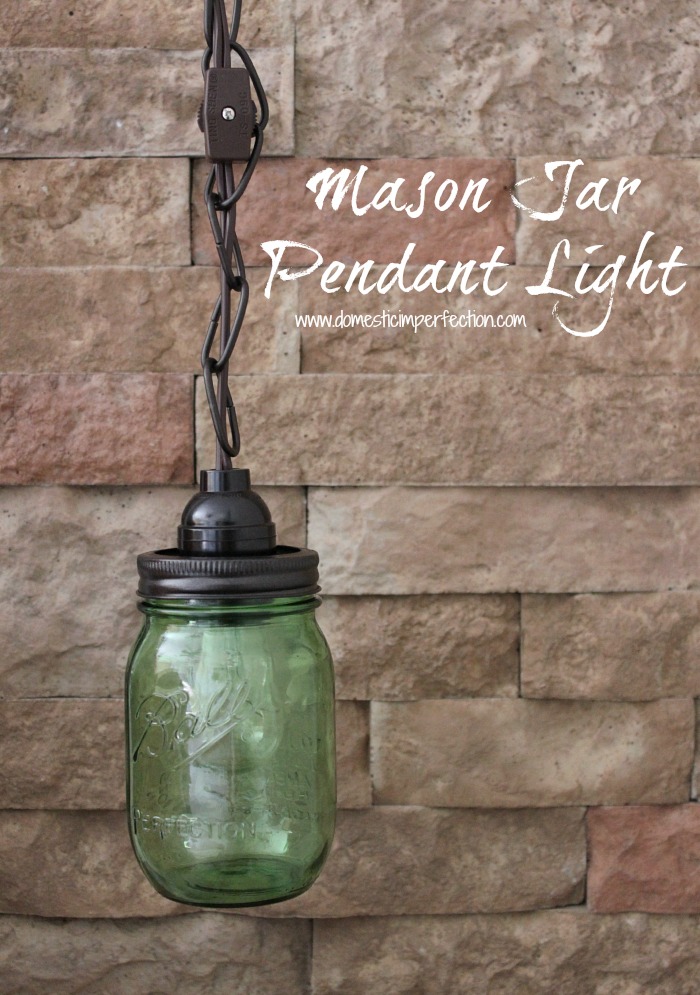 You know those projects that should be really easy…the ones that should take you less than an hour but end up being a complete time suck and turn out NOTHING like you had planned?

Yeah, me neither. Never happens.

I’ve been planning to hang pendants in the guest room instead of doing traditional bedside lamps. The room is pretty small and anywhere I can save space I will. Plus I’m certain my tomato cage side tables wouldn’t support anything like that for long.

My first choice was these pendants from Restoration Hardware, but they are $119 each. 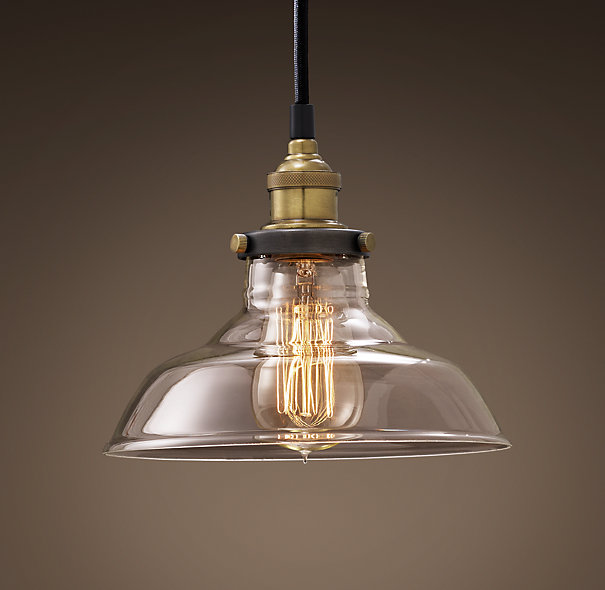 I found nearly identical ones on Amazon for only $54 a pop, and in hindsight that is an amazing deal and I should have just bought those (still might for my kitchen). 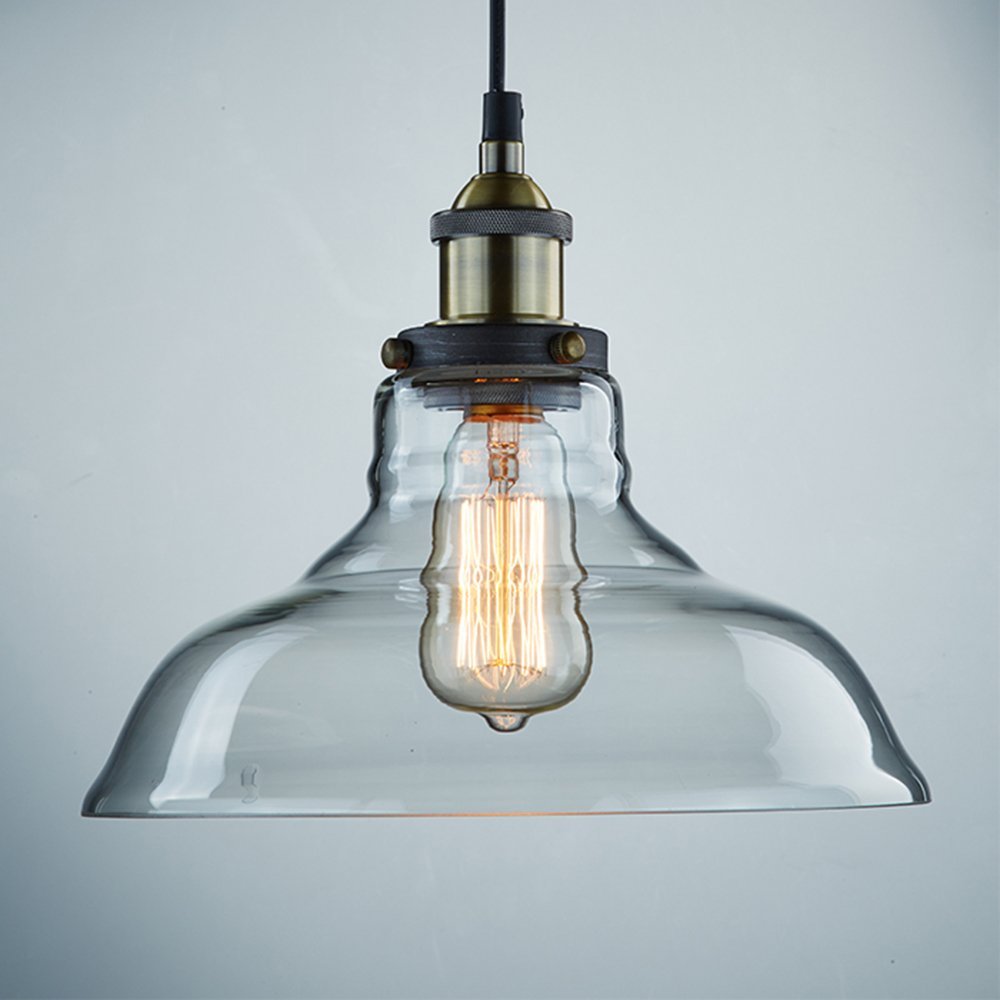 I thought that I could make my own for crazy cheap with a pendant kit and a glass bowl or something. Turns out I can’t…but I can turn my failure into a mason jar light and share with the process with y’all. So lets just do that instead. From what I can tell, there are basically three ways to go about making a mason jar light.

Option one (the easiest option)

Amazon.com sells these pendant lights especially made for mason jars. 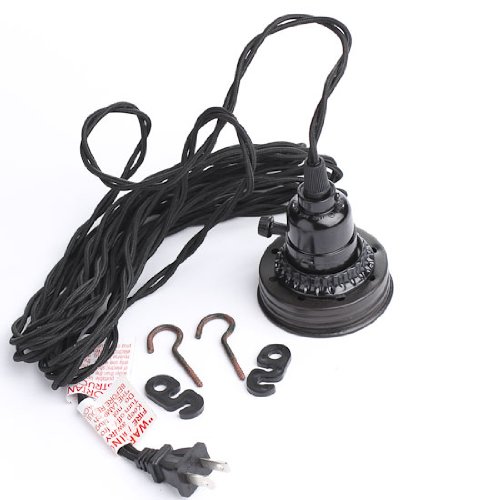 You literally just plug them in (no electrical knowledge needed), hang them from your ceiling, and screw on your jar. It doesn’t get any easier than that. They are $31 each right now, but they change price all the time and were like $25 when I was wishing I had bought them.

Ikea sells a pendant light that would work for this project for $5 (the Hemma). 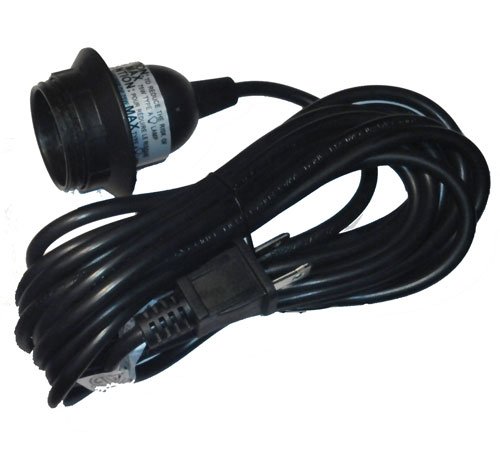 If you don’t have an Ikea near you (I don’t), then you can order it through Amazon for about $10. This one has a plug and would be easy to install as well, but you would have to do a little work to your mason jar to get it onto the socket (more on that in a minute).

This was my option of choice, obviously. I started off buying this pendant kit for $18 from Home Depot. 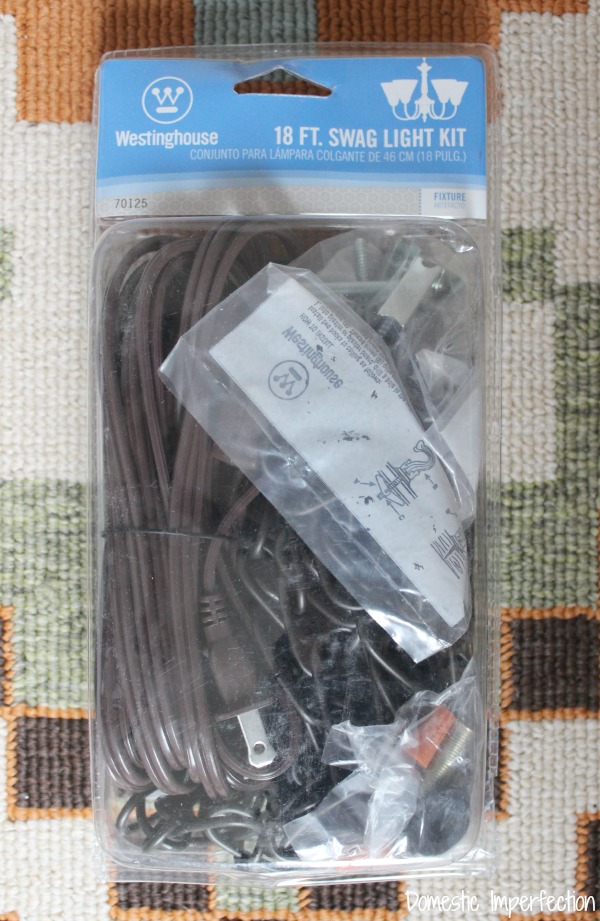 It had a plug, a chain, an on/off switch on the cord….but no socket. Just a cord with nothing on the end. And I of course didn’t notice this until after my husband had cut the plugs off and it was too late to return them. I had planned on just plugging them in and making the whole thing easy, but Adam immediately vetoed that idea. He couldn’t see why I would want cords running up the rock wall I just spend forever installing. So he cut off the plugs, drilled some holes in the ceiling, and somehow wired them into the fan. Don’t ask me how…he’s pretty much a magician.

ANYWAY, to make a long story short I tried a few different pendant ideas (all failures) and ended up going with mason jars, since I could easily figure out how to attach them.

And now for the instructions…

Most pendants will already have a socket on the end, and if it looks like this you are good to go… 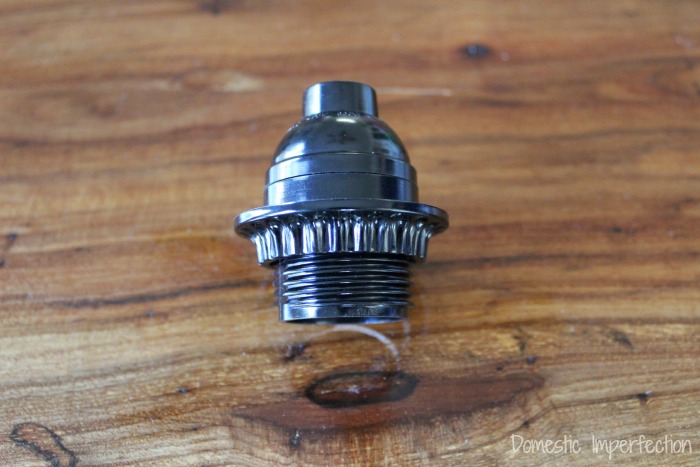 If not you can buy them separately. You have to buy a phlegmatic keyless socket, the kind that’s threaded with a ring on it.

First you will need to prepare your mason jar lid. Place your socket in the middle of the lid and trace around it. Then using a hammer and a small nail add holes and cut out the center. 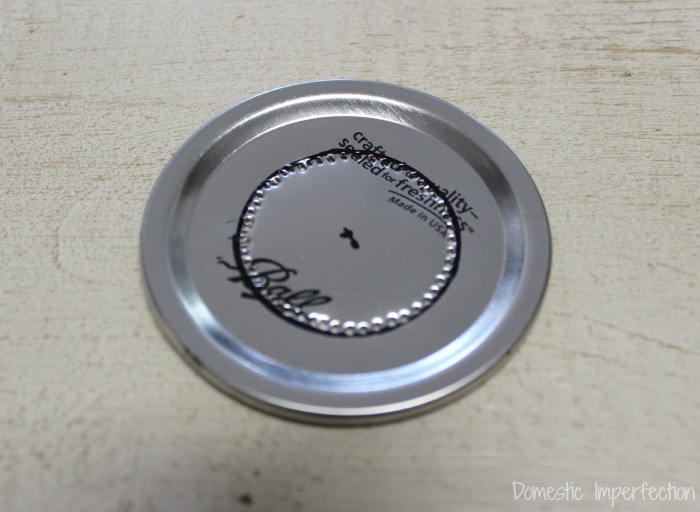 Next I spray painted mine to match the pendant cord and chain, but this is optional. 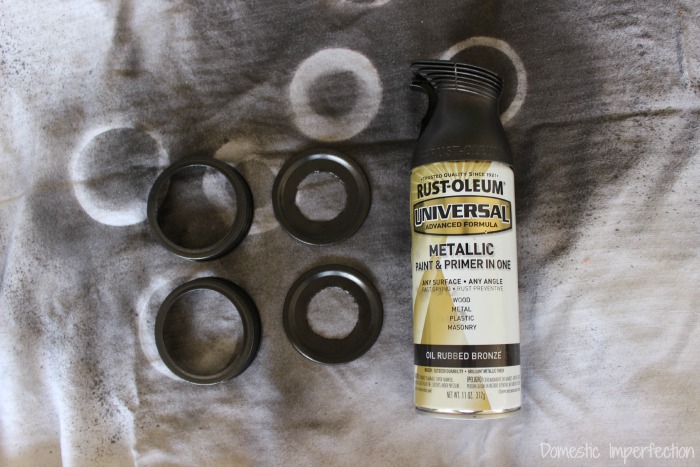 Don’t forget to use the hammer and nail to punch some vent holes in the top. 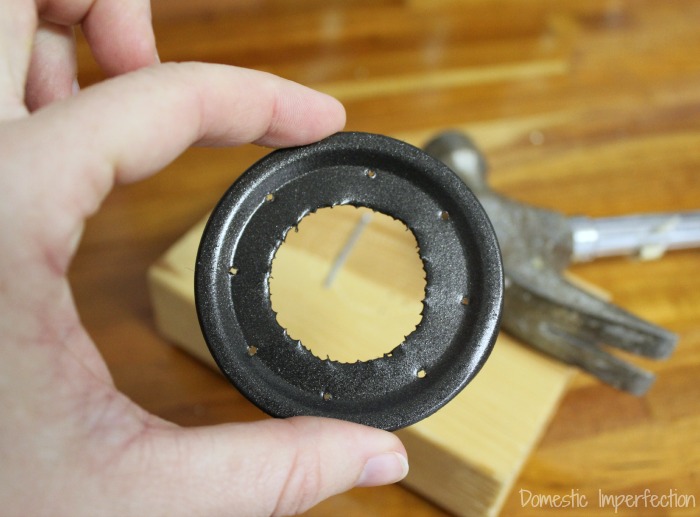 Now it’s time to assemble everything.

If it’s not already, wire the socket onto the cord (I don’t have a picture, but it’s just two screws). Then slide the band (the ring part of the lid) over the cord and push the socket through the lid, like so … 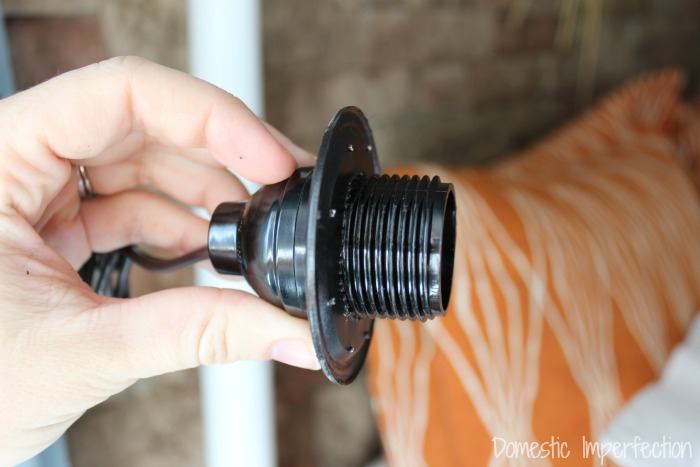 Then screw the ring on under the lid. This holds everything in place. 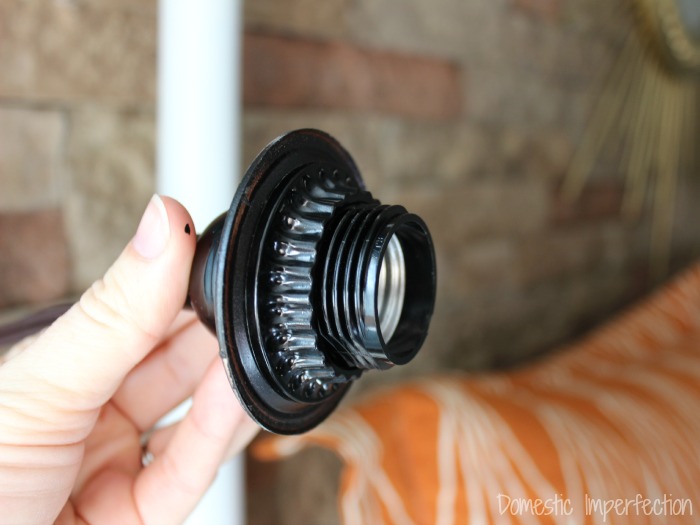 Next add your bulb. I used a really small dim one (11 watts) so that it wouldn’t get too hot. 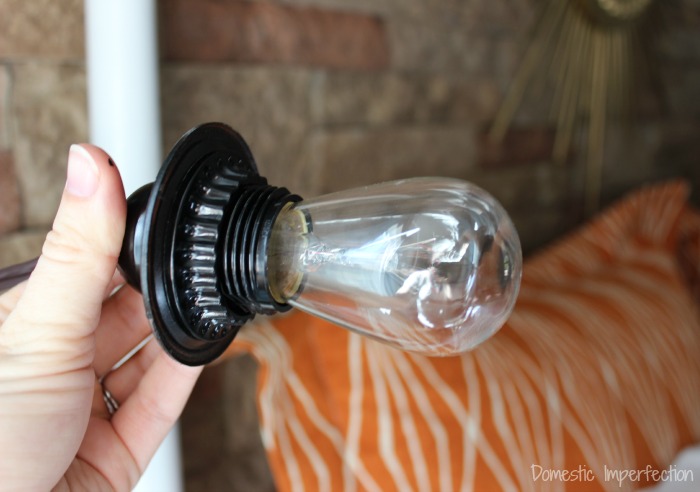 Then screw the jar into the band and your done! 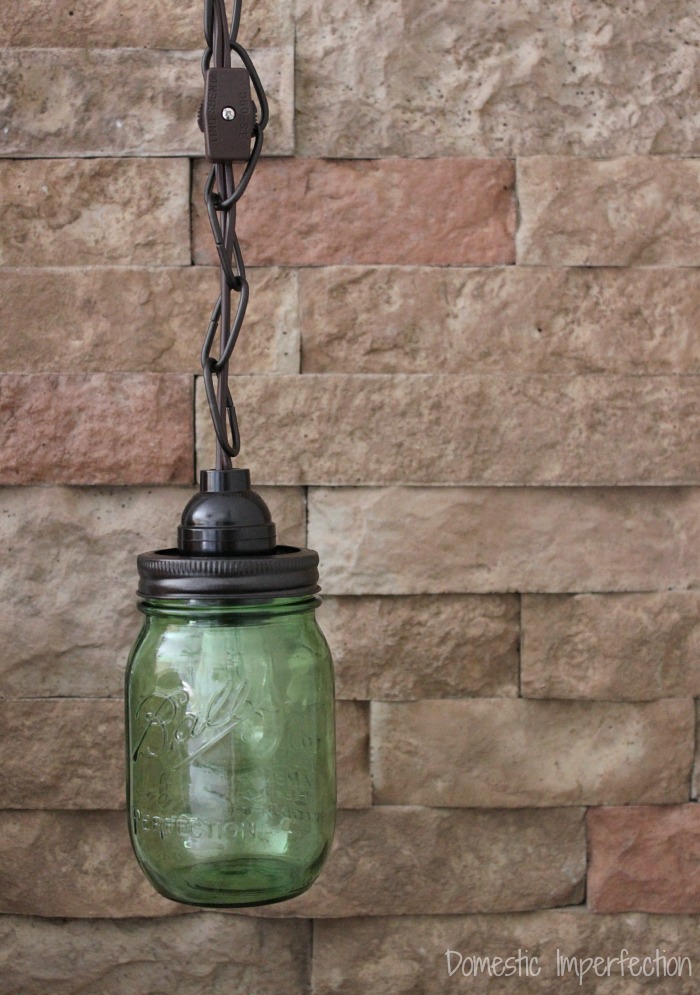 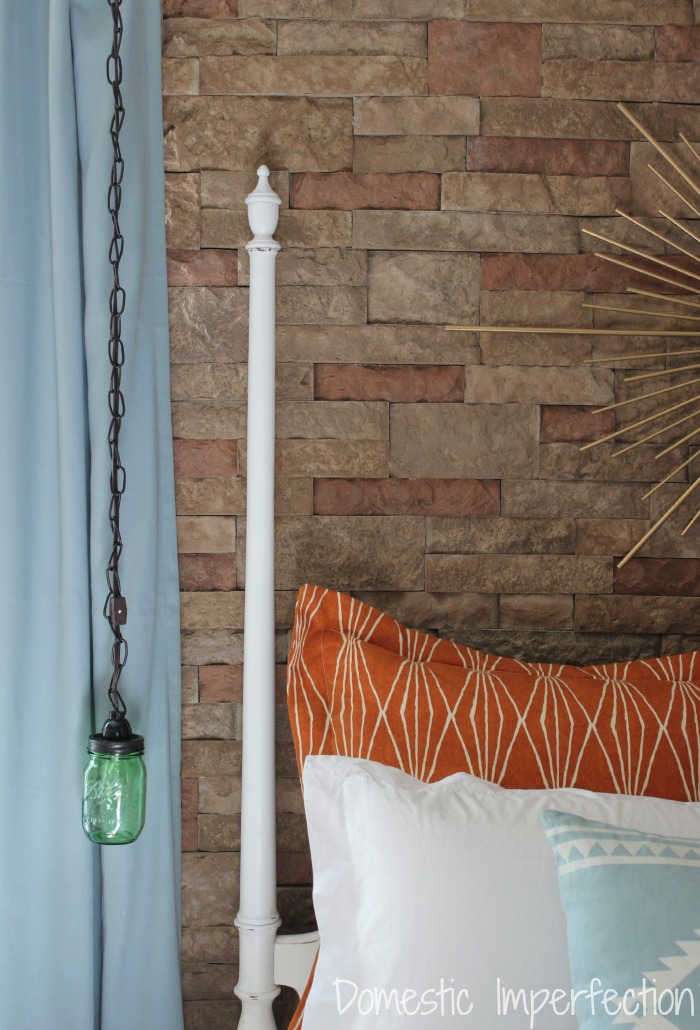 I found the green jars at WalMart and I love them, they tie into the green in the rug and on the wall. Finding them was actually what convinced me to go ahead and do the mason jar lights. 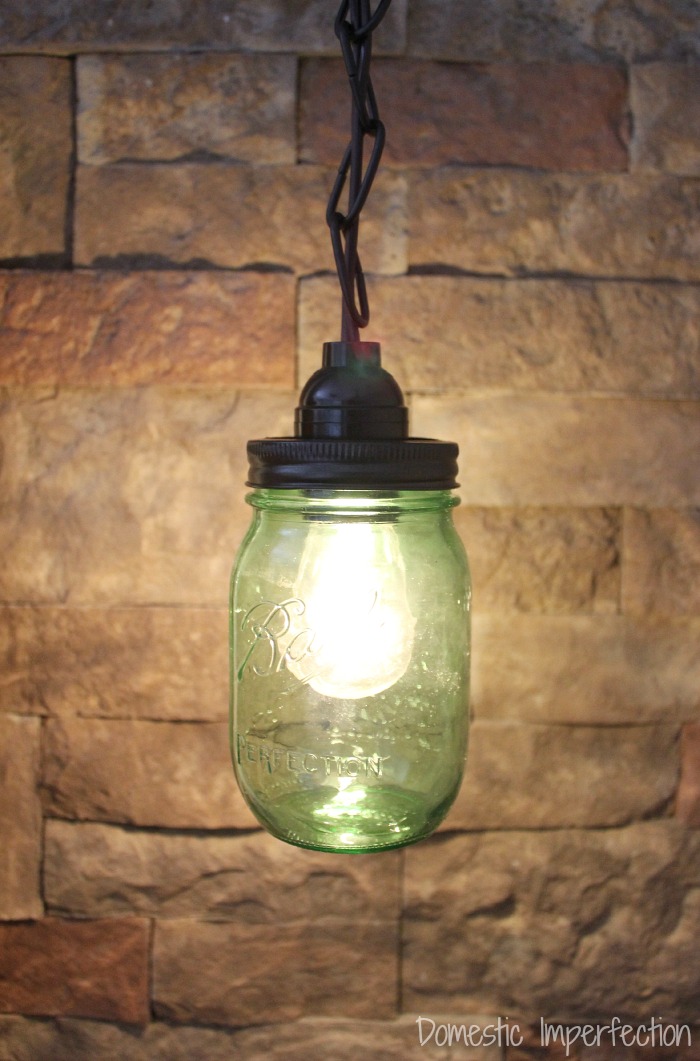 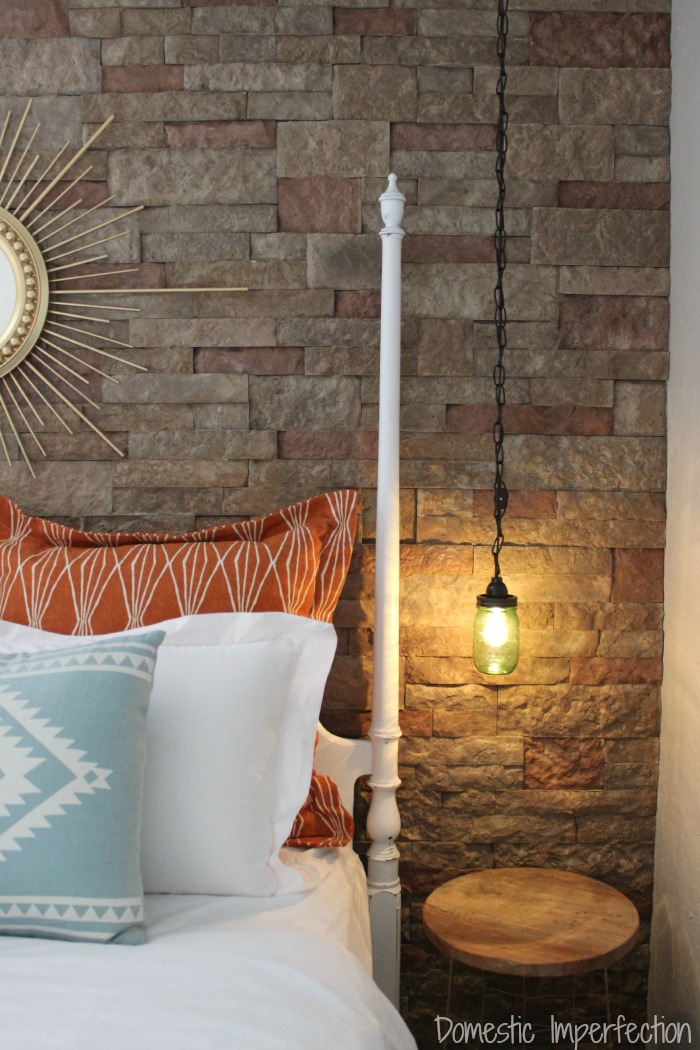 So even though these turned out nothing like I planned, they actually look great in the room. Everything is coming together really well … I can’t wait to show y’all the whole thing in the reveal! 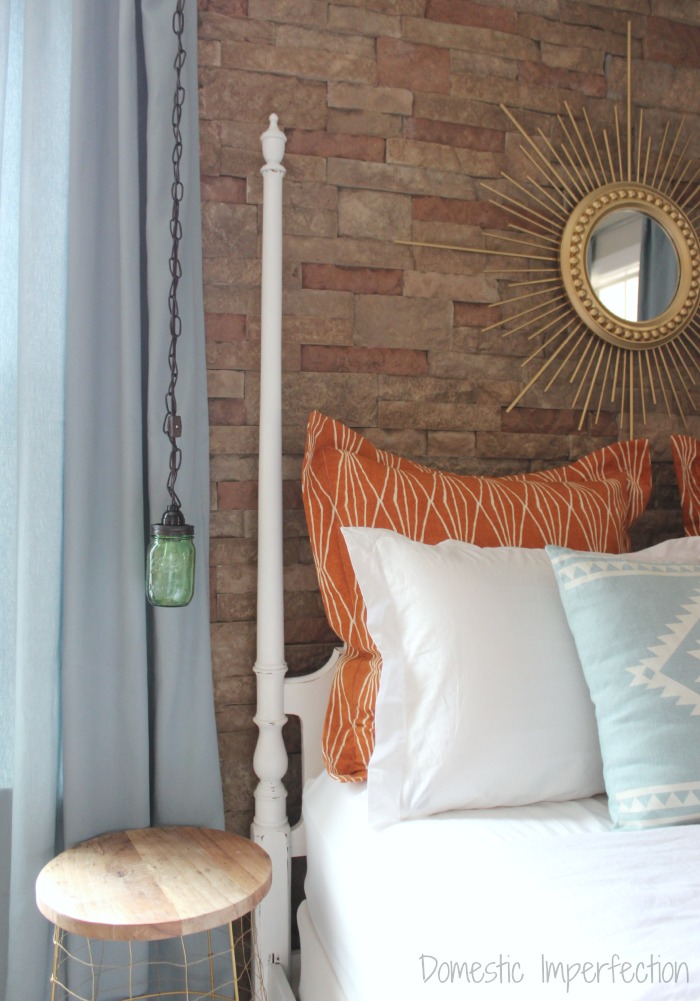