745shares
This post brought to you by Elmer’s ProBond Advanced. All opinions are 100% mine.
.

Happy second day of Spring! That might not mean a lot to me here in South Texas (where it’s basically sunny all the time), but for all you northerners…this is big stuff. I lived in Northern New York for nearly six years, and that day that you can dash from your house to your car without wanting to DIE of frostbite…well, that’s a good dang day.

This spring I have plans for a few outdoor projects, the first one is building a front porch light. Adam and I have a lot of DIY projects under our belt, but somehow DIYing light fixtures wasn’t one of them. Our first attempt didn’t turn out half bad though… 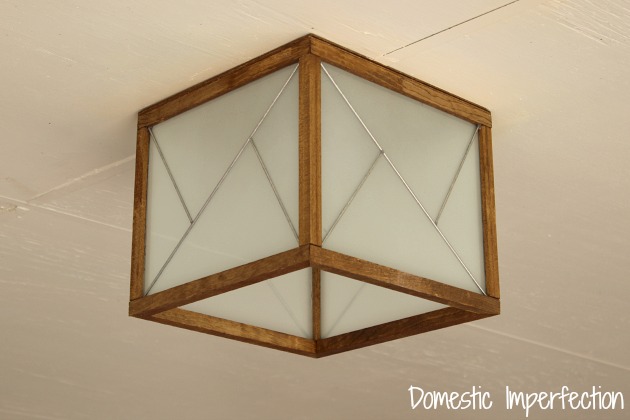 I wanted something made of a few different materials, and I dreamed up a boxy wood, glass, and metal one. I was pretty sure it would work, so the boys and I headed to Home Depot for supplies. When Adam got home that day I explained to him my idea, hoping he would say it was doable. Sometimes when I present my ideas to him he scrunches up his face and says some variation of “that would never work in real life”…but not this time. I must be getting better at this. Or may HE’S getting better at it.

Here is what you will need… 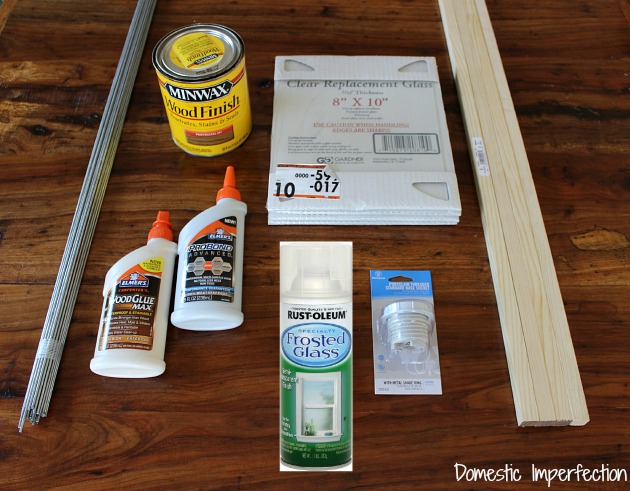 So step one, you will need to cut a shallow groove (1/8 inch deep) in the square dowels so that there is a secure place for the glass to rest. I’d try to explain to you how Adam did this, but a simple picture would probably be much less confusing… 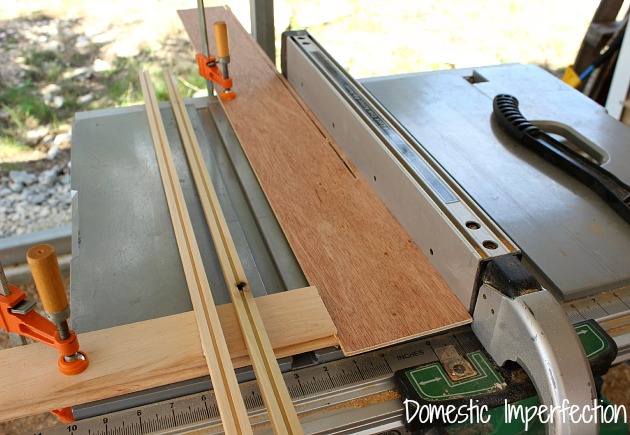 Next cut the dowel pieces down to size. You will need four pieces that are 7 3/4 inches long inches (cut square) and eight 9 3/4  inches pieces (cut at a 45 and measured from the short side). 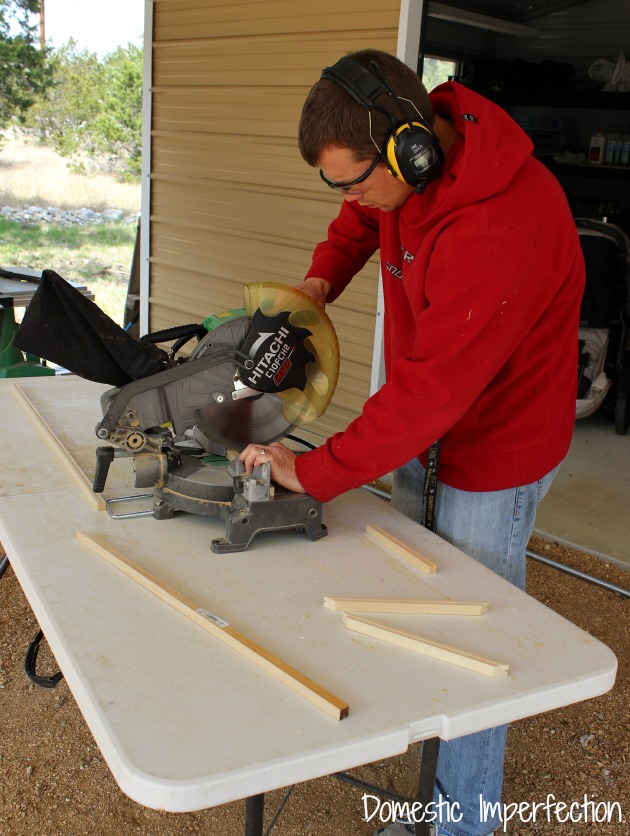 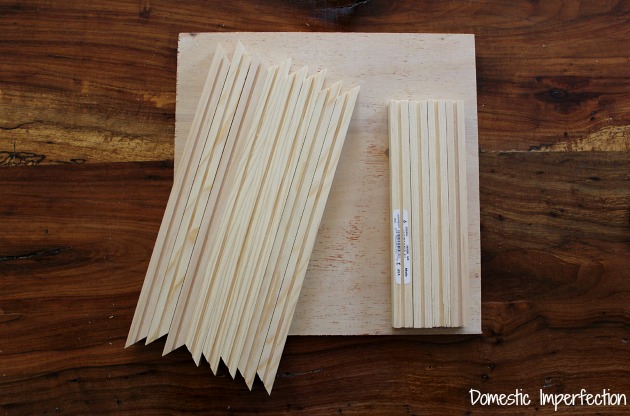 Here is a closer look at the groves, the corner pieces have two. 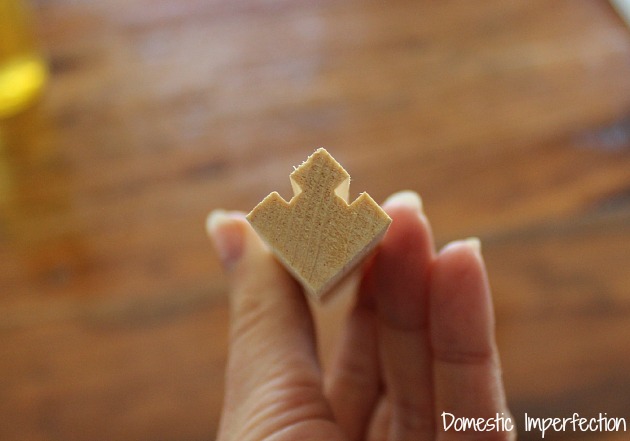 The next step (after staining) is to start assembly. I had to make dinner so Adam did this part too…it’s not all fun DIY projects all the time. After cooking dinner I did the dishes, cleaned the kitchen, and then folded a mountain of laundry. You know, just living the dream, basically. Assembly took Adam about a quarter the amount of time it would have taken me, which gave me plenty of time to finish putting away that laundry, toddlers in tow. I think he may have had an ulterior motive with all the extreme light helpfulness.

So, assembly. First you will want to glue the first four dowel pieces to the wooden square using wood glue. 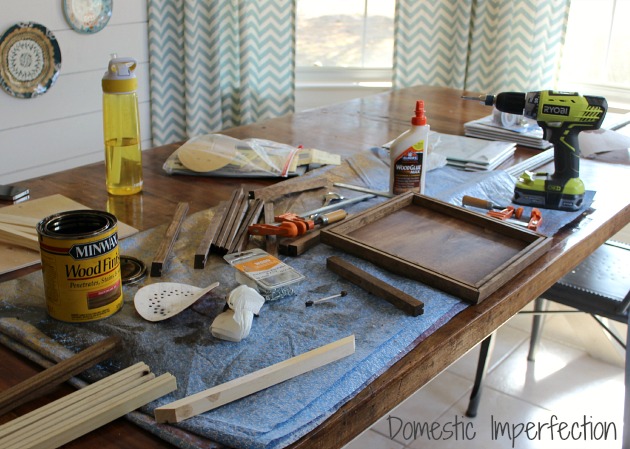 Then glue the corner pieces on, making sure to keep everything square. 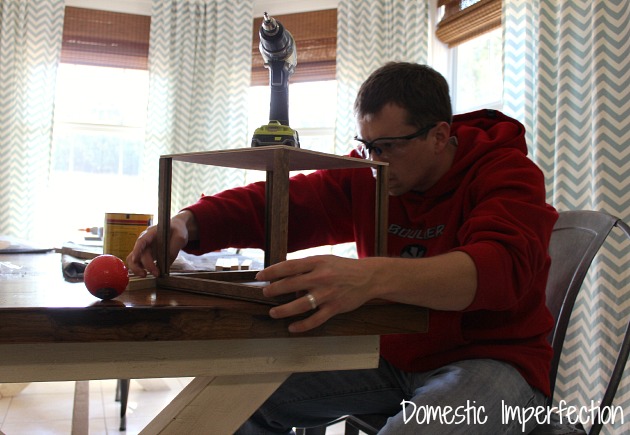 This next picture is out of order, but he also added screws to make it more secure. The silver ones go into the base frame and the black ones go into the corner pieces (this is where those bigger dowels would come in handy). 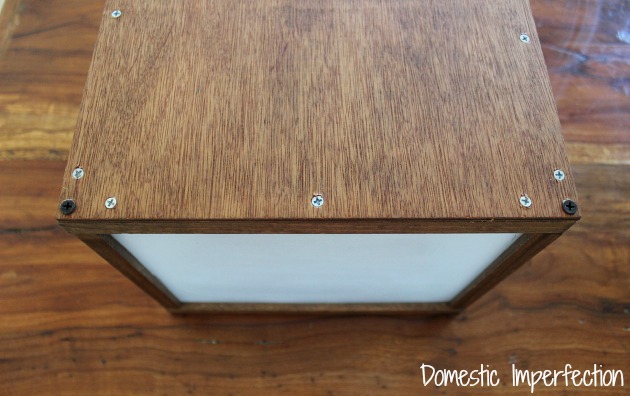 Okay, my turn. First I sprayed one side of my picture frame glass with a few thin coats of frosted glass spray paint, then I added a little Elmers ProBond Advanced to the grooves, slid my glass into place (make sure the painted part is inside), and then glued the rest of the grooved dowels in place. 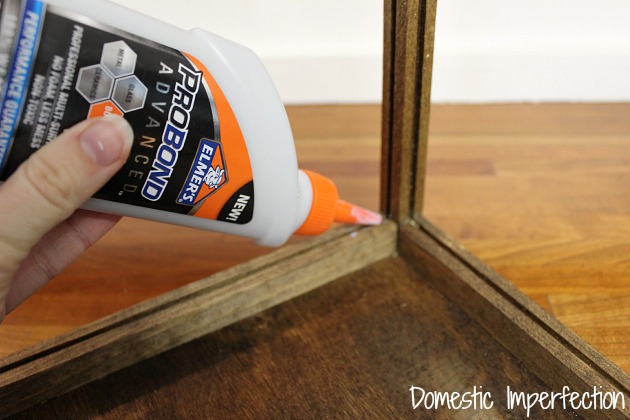 The ProBond glue works really well and is exactly what I needed for this project. I’ve had glue problems in the past (like here and here), but this one it goes on without becoming a foamy mess, dries completely clear, is paintable, works on Mixed Materials, and is 100% weatherproof. Perfect for my light fixture.

The wooden box is actually really square, but (much to my surprise) the picture frame glass is NOT. It needed to be clamped and allowed to dry, but for some reason we only own two clamps, and I needed more than that. Solution? 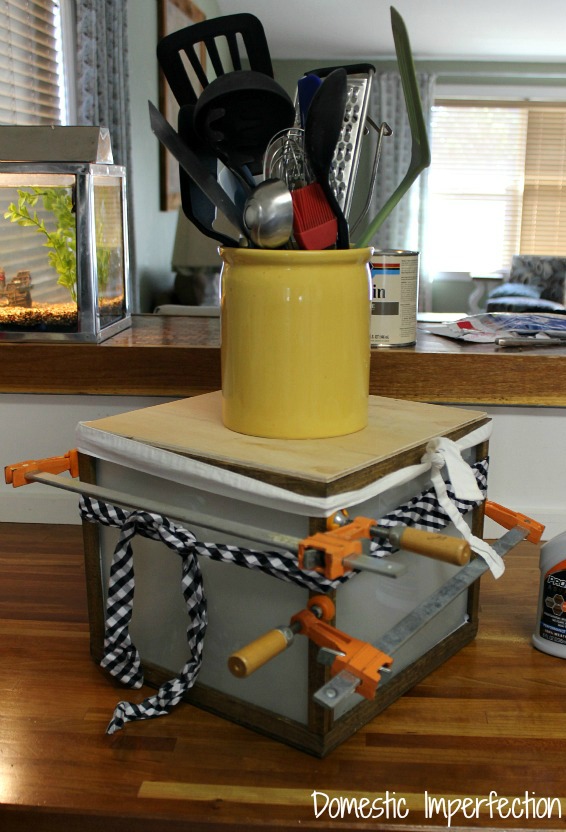 I’m officially putting in my early Mothers Day gift request…Mama needs a band clamp. And let’s throw in a massage for good measure.

Next I added the metal embellishments. I had originally planned to put a simple X on each side…but then I decided to rub some funk on it instead.

I glued them right to the glass using the Elmers ProBond, since it dries clear and all. 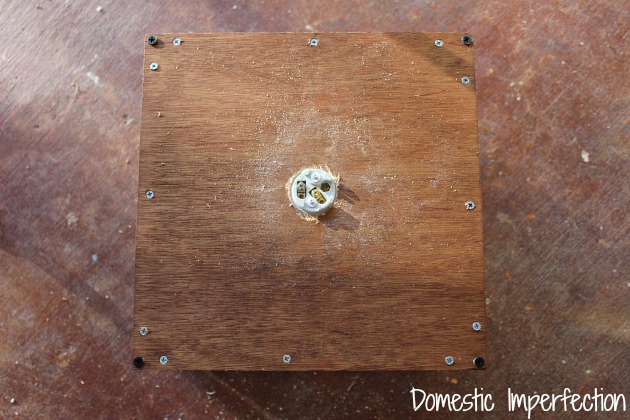 Then we installed the light socket, wired it up, and screwed it directly into the ceiling.

….aaaand then I decided that it looks awesome. It even passed the nighttime test. 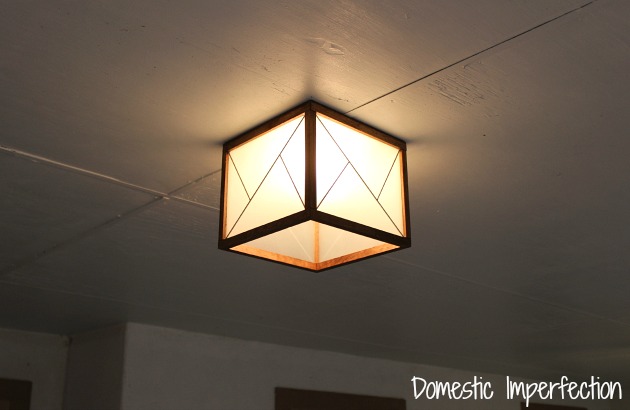 To me it kinda looks like a weird modern twist on a craftsman style light. Sorta? You know what, lets not label it. It’s that cool light in school that fits in everywhere…or nowhere. It walks to the beat of its own drum and it’s okay with that. 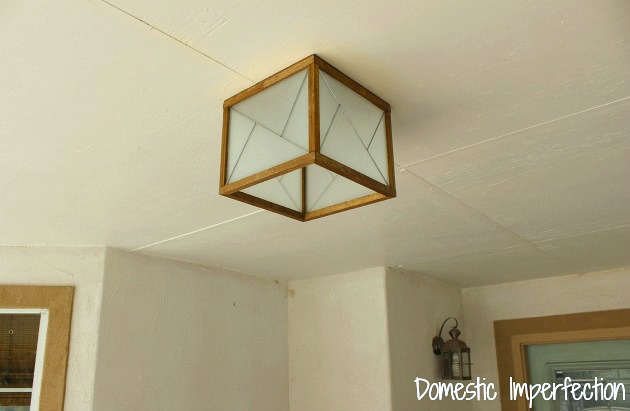 Whatever it is, it’s better than the cheap old boob light that was there before (which was bright gold before I spray painted it years ago). Oh, and I almost forget…the new light cost less than $20 to make! 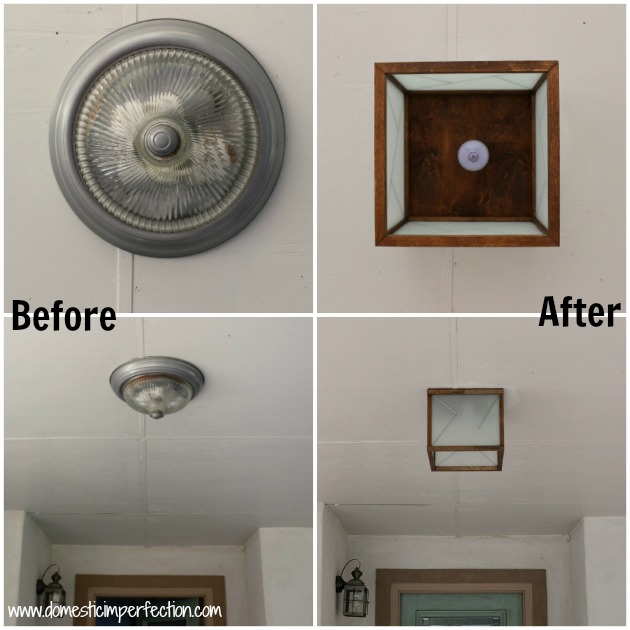 I actually made two one these, but the second one is taking longer to make so I’ll have to post about it next week. It’s for the foyer though, and it a fancy chandelier version of this. Not to label it or anything.