My newly built farmhouse table has been begging me for some new slipcovers. The greenish ones were never my favorite and they don’t fit well at all – the backs are too tight and the bottoms are too loose. Most of the time they look like this…. 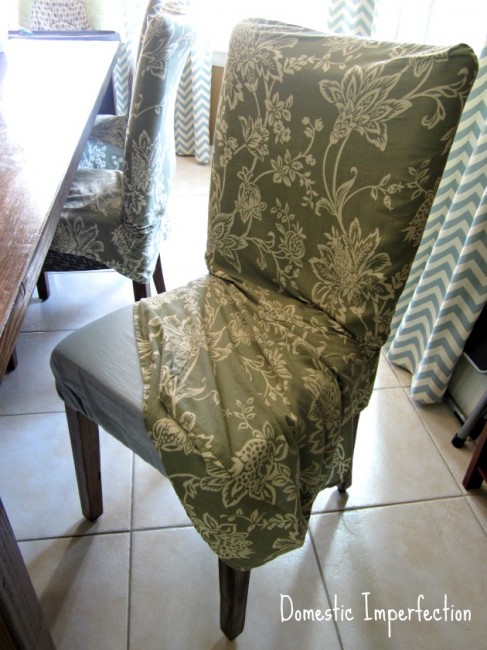 I bought the chairs on Craigslist, I want to say it was $80 for five of them. One turned out to be broken beyond repair, which was okay because I only needed four. The other four I ripped apart, pulled off the broken springs, added plywood, foam and reupholstered. They don’t look at all pretty underneath the slipcovers, but they’re dang sturdy. The only “process” picture I can find is this one… 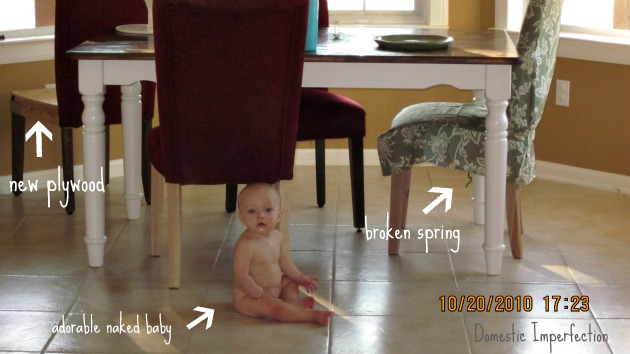 (I just noticed that this picture was taken on Levi’s birthday, one year prior.)

Anyway here is what they look like under the slipcovers. I had no idea when I bought them that the rounded and flared backs would make finding slipcovers nearly impossible. 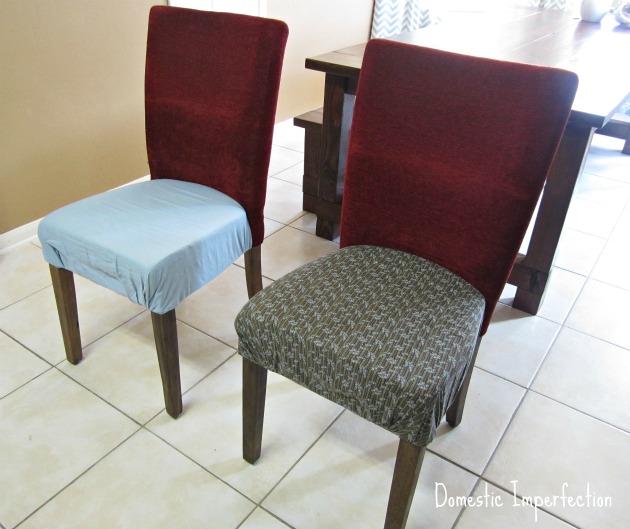 I decided to try and make some new slipcovers. I’ve only ever sewn square things before (pillows, curtains, tablecloths) but I’m always up for teaching myself something new.

Anyway, my slipcovers were a total fail. I worked on one for a week, but I couldn’t get things to fit quite right and my attempt to make them feminine just looked dumb. So I decided to give up…and I NEVER decide to give up. If I only had to finish the one then I would have done it, but I had to make THREE more. No thank you.

So here it is, my failure… 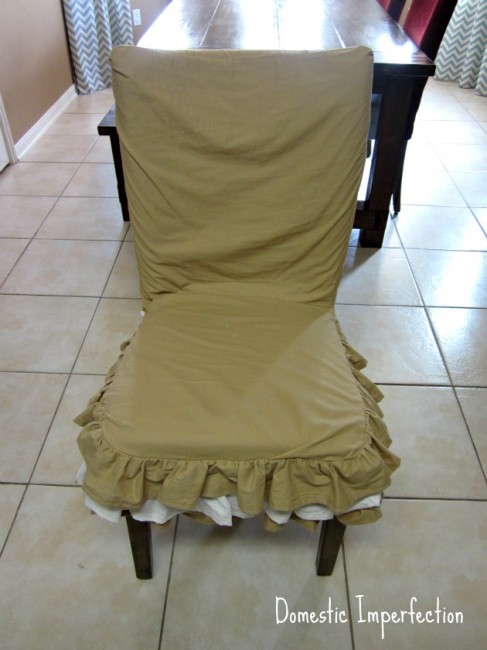 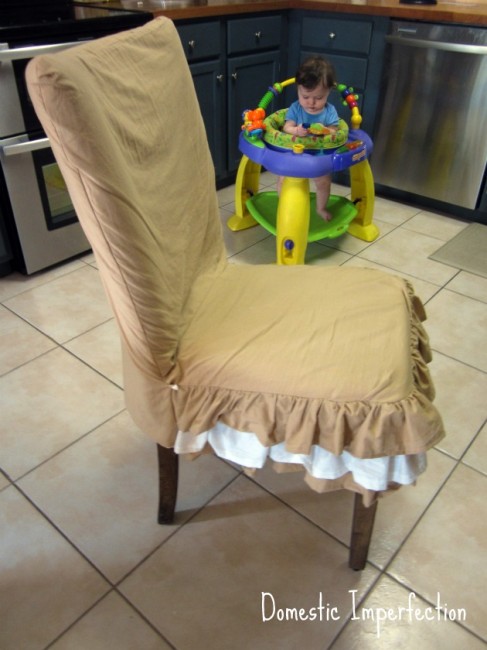 I’m not going to lie, this was the most frustrating project I have ever done. I may have cried a little. Sewing just isn’t my thing.

It actually doesn’t look tooo terrible in those pictures…let’s get closer. 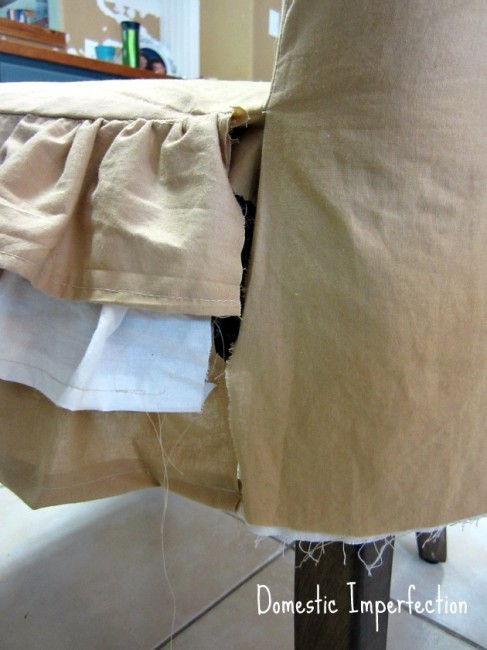 So of course I’ve been eyeing new chairs ever since I decided making slipcovers wasn’t going to happen. 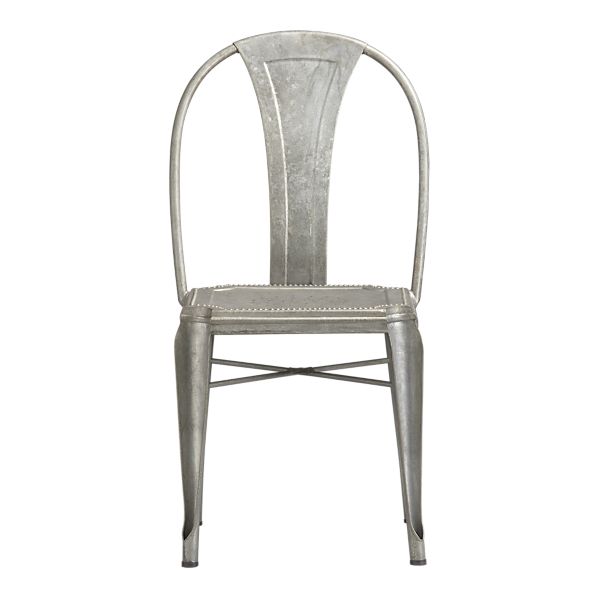 …but at $199 a pop I (coughthehusbandcough) won’t even consider them. (UPDATE!)

World Market has these for $99… 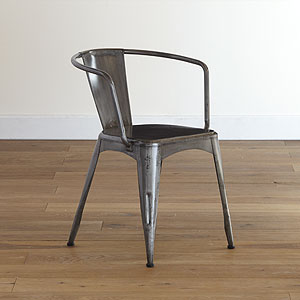 I also like these chairs from World Market. True, they’re not that different from what I have now…except that they’re made for slipcovers, no funky curved and flared backs and rounded seats. Plus new slipcovers come out every season…fun! 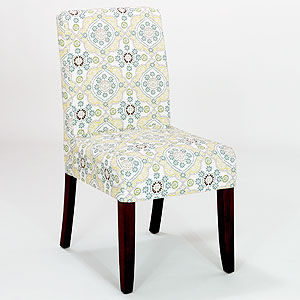 I can’t seem to find the price of just the chairs on the World Market website right now (weird), but I think I could get three with slipcovers for about $300.

We could spend about $10 and make another bench. 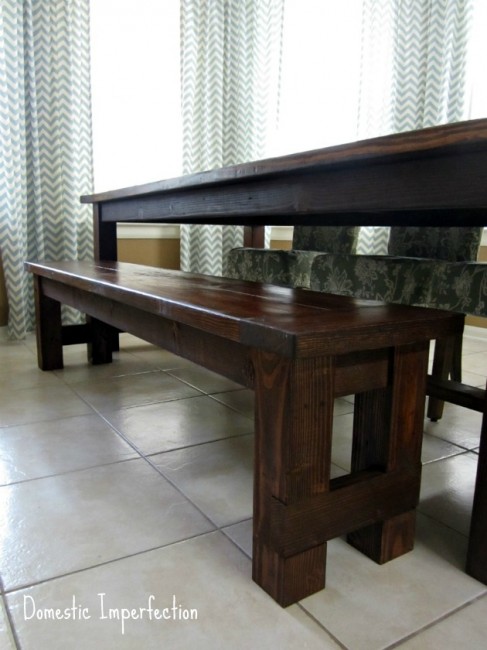 I’m just afraid that two benches would look like a picnic table. Plus sometimes you just want to kick back in a chair, you know?

So what do you think…galvanized chairs, slipcover chairs, bench, or make do with what we have?