I’ve been wanting something fun for the big blank wall in my dining room. Something colorful, something cheap. I wanted a plate wall. I excitedly told Adam my idea…and he seemed confused.

Adam : “A plate wall? Like dinner plates, on the wall?

Adam : “You mean like grandmas have in their house?”

Adam: “Okayyyyy, but if I come home tomorrow and you’re wearing a muumuu I’m gonna nix this whole idea.”

I promised him I wouldn’t be wearing a muumuu, but then I got to thinking about it… a muumuu actually sounds really comfortable. But a promise is a promise, right? For now anyway…

It’s easy to find plates in thrift stores, not so easy to find plate hangers. I looked for a month and never found a single one. I went online to buy some (okay, 24) and was shocked to find that they are almost $4 a pop. Eeek, that’s almost $100 in plate hangers! That’s an insane amount of money, especially considering the plates only cost me about $15. Then I ran across these newfangled plate hanger thingy’s…you glue them to the back and they don’t show. Great…except that they are only slightly cheaper than the wire ones. So I turned to Google, and it lead me to this tutorial from In My Own Style on making your own plate hangers with glue and paper clips. DUH! So easy…and so cheap. 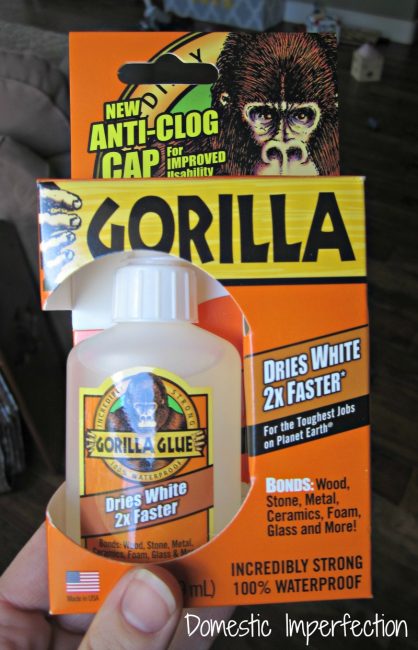 I put some glue on my plate, slapped the paper clip on (after bending it a little), and let them dry. I came back about half an hour later to find this… 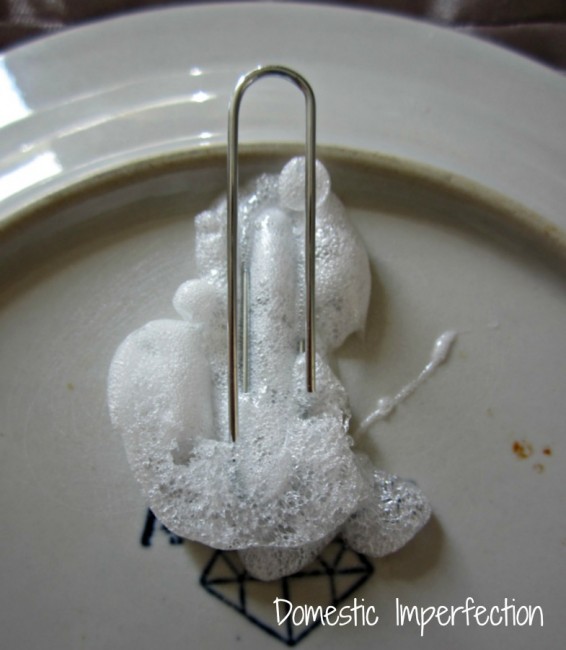 The glue went crazy and bubbled up so much the paper clip wasn’t even close to touching the plate. After a few good slings over the bed I decided that they were secure, though they didn’t sit flush on the wall because the glue was so thick.

I ended up using a butter knife to remove the glue and clips from all 24 plates.

So I started over. I applied the glue SUPER THIN, didn’t bend the paper clips at all…and it turned out perfect and sat completely flush on the wall. The best part is that I made 24 plate hangers for about a dollars worth of glue and paper clips! 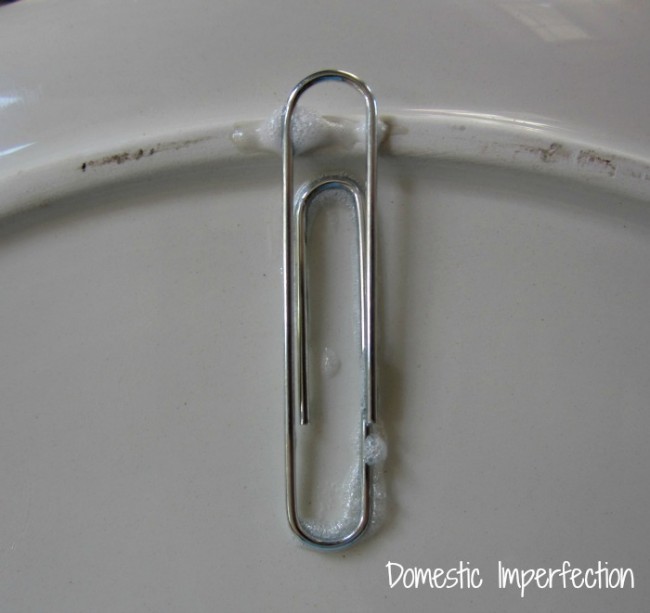 UPDATE – I just gave you terrible advice! The Gorilla Glue ended up not working at all… CLICK HERE to read my follow-up post and learn what you should use to make plate hangers.

Next it was time to put them on my wall. We just finished installing and painting our plank walls, so I was feeling protective and wanted to avoid peppering them with holes. So I thought ahead and tried to decide on my plate design before putting them up. 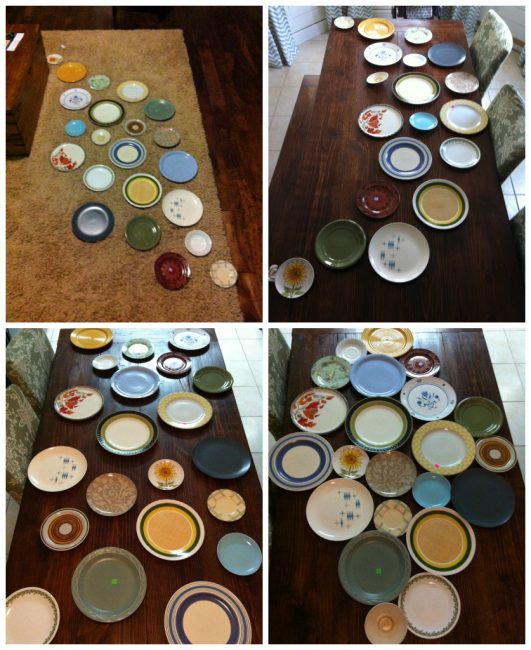 While trying to find some inspiration I came across this wall and loved the swoopiness of it. 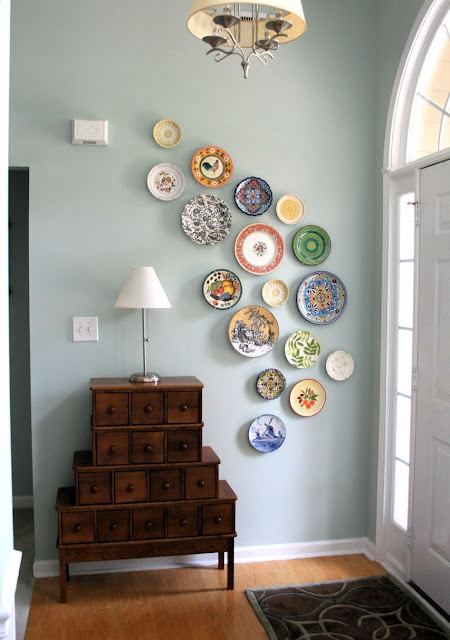 So I tried some swoopiness of my own…. 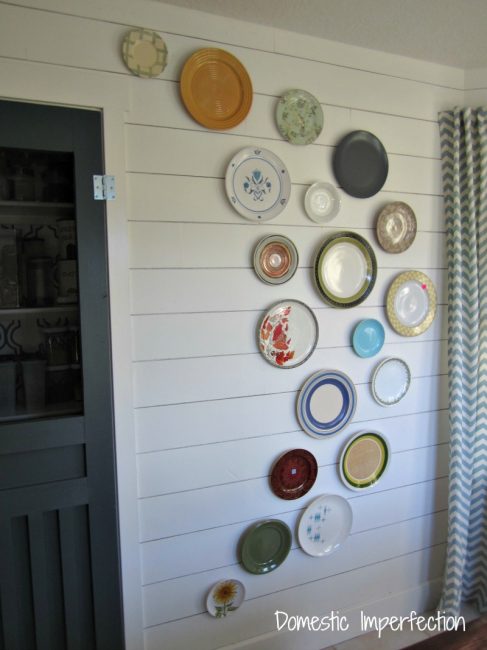 And I hated it. It didn’t look swoopy and awesome, it looked like a giant backwards moon. (I know the moon goes both ways…it just looked backwards to me.) So I took it all down and puttied and painted all the holes I had made. Blah.

After much more plate arranging I decided a few things..

So I hung my biggest plate right in the center of the wall and worked out, being totally thoughtless and random. I stopped when I liked it and only ending up using about 2/3 of my plates. Perfection. 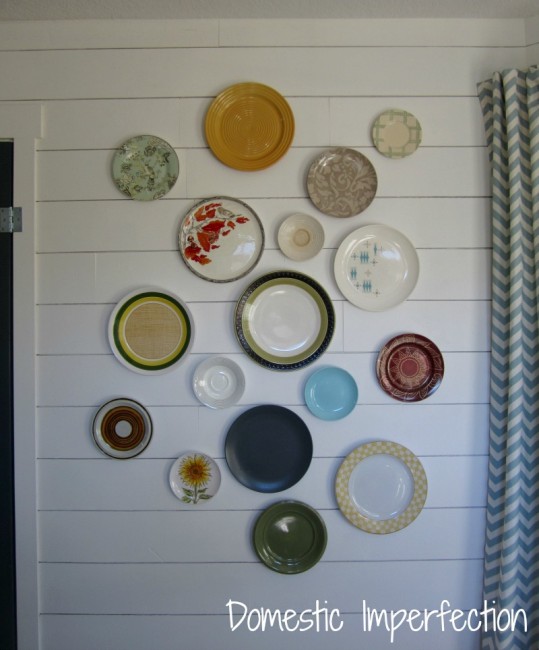 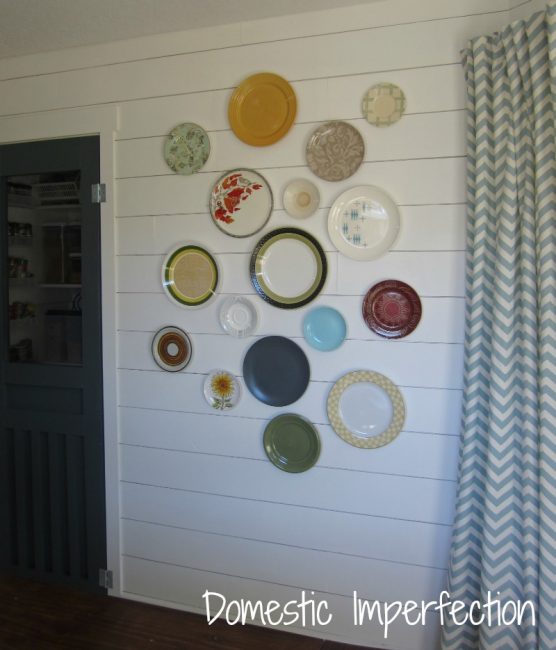 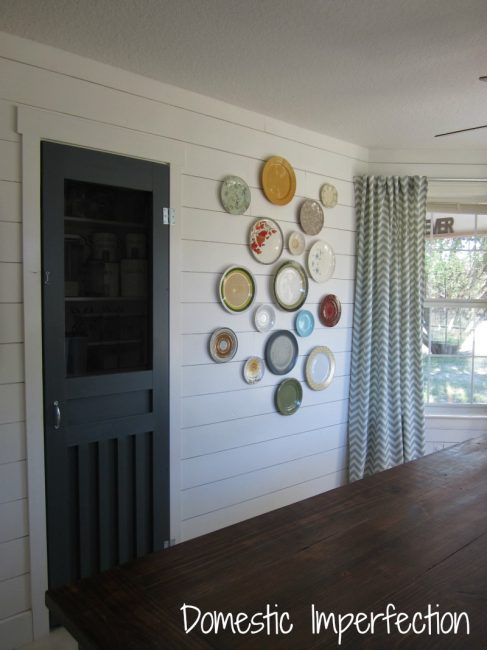 I love when I finally get to the decorating stage of a remodel. This room has needed some color for a while and I think the plate wall is a fun way of doing that. Plus it only cost about $15. This whole dining room has actually been pretty cheap so far. Just in this picture we have an $18 custom screen door, $100 plank wall, $100 bay window rod and curtains and a $150 DIY farmhouse table and bench. That’s what I call a thrifty remodel!