*This is a Sponsored post written by me on behalf of Miracle-Gro. All opinions are 100% mine.

Last year we built our garage (which we love BTW) and added a sidewalk to connect it to the house. We also had a fence installed around the backyard, and all of that created a little triangle of secluded yard space. 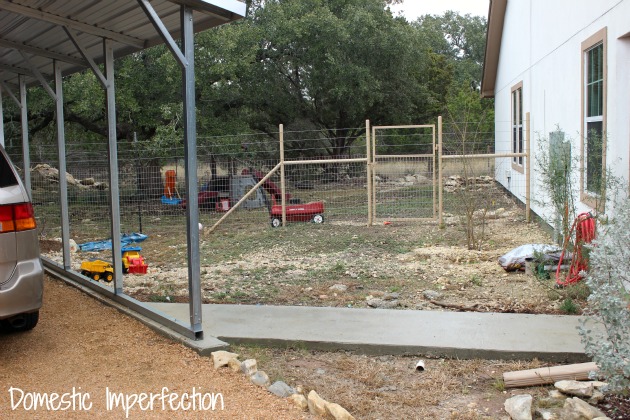 I’m using the term ‘yard’ loosely, obviously. It looked terrible and needed some serious attention. When Miracle-Gro asked to team up this spring to complete a few outdoor projects, I knew this area was going on the list. It’s been neglected for an entire year, and that is long enough.

I wanted to turn it into a sort of “secret garden”. I saw a lot of mulch, plants, a stone path to the gate, and a bench. I also needed (yes needed) the whole area to be very low maintenance. This area is just outside the fence though, so it is susceptible to be ravished by hungry, desperate, annoying deer. And it’s not getting any drip irrigation like my garden, so it needs to drought tolerant. What’s left? I don’t know…cactus? But I have toddlers, so cactus is a no-go. Hmm…

So I packed up the gang and headed off to Home Depot in search of a few plants to fit my needs. I came home with these… 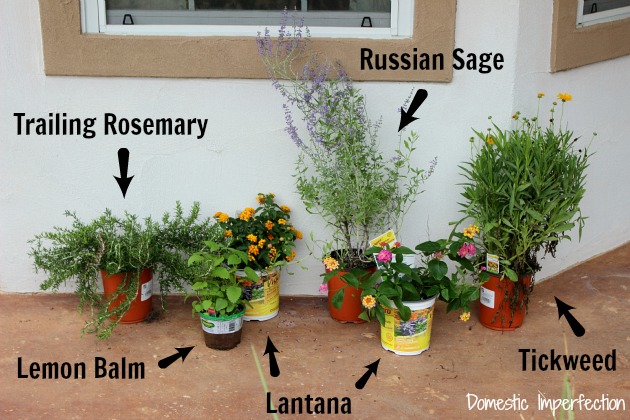 I also already plated a few plants in there that are doing great – a pomegranate tree, vitex, red yucca, and oregano.

In order to actually get these babies in the ground I invited some people over for a fun little work party.  And by “fun” I mean sweaty and by “some people” I mean my parents. They like hard work, plants, grandbabies, and food. It’s a win-win. 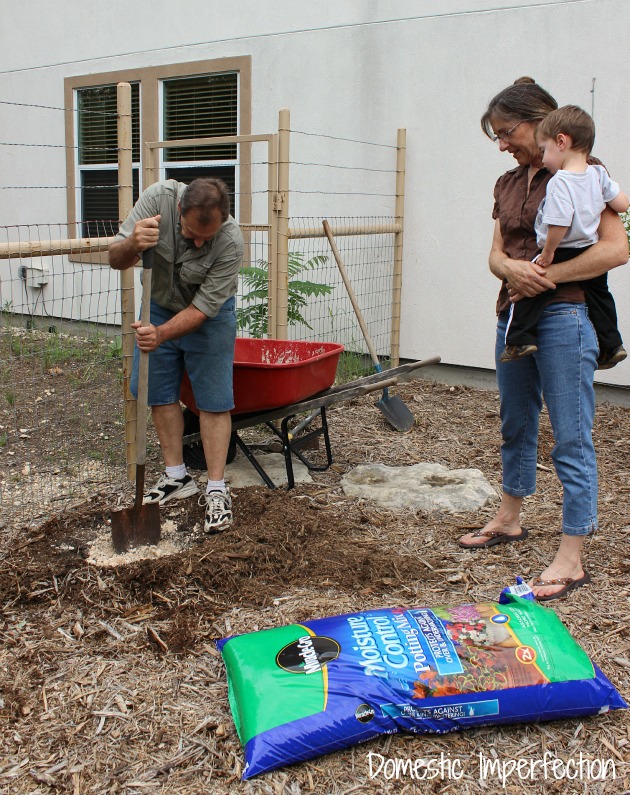 I had already spread a  bunch of mulch here when we were filling the vegetable garden with mulch, so we were able to get right to digging.

Some of you live in areas where you can put a shovel into the ground, dig out some actual dirt, and plant a plant. I hope you appreciate it, because when I chip away at the ground for a while, this is what I end up with… 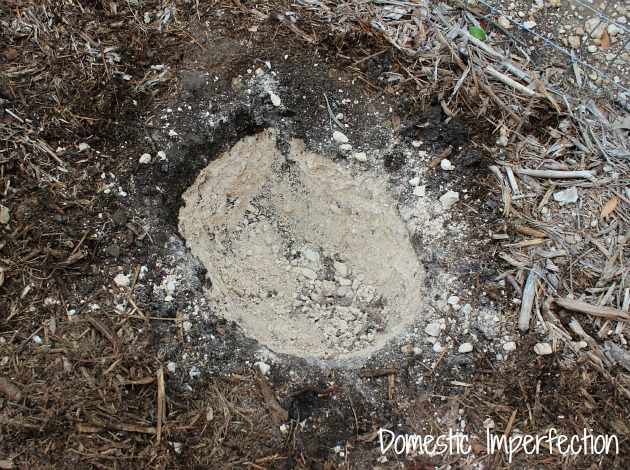 Hence the reason for the Miracle Gro  Moisture Control Potting Mix…Texas doesn’t just give dirt away for free. 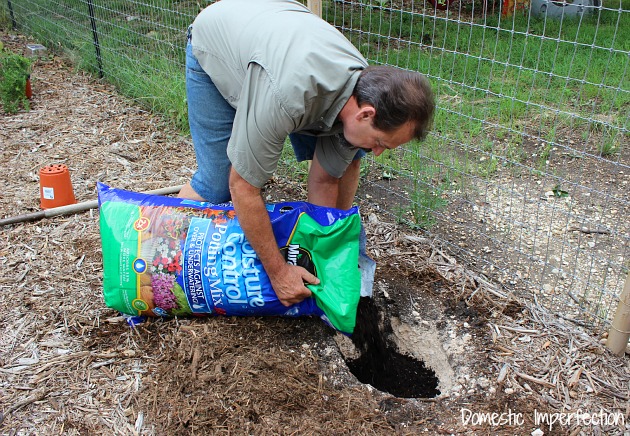 And so we dug, and we planted, and it was basically a hose drinkin’, pick axe swingin’ good time.

(note: pick axe swingin’ in flip flops is not recommended.)

After everything was planted we added some fertilizer (Shake n’ Feed All Purpose Plant Food), watered, and went out into the yard and found a bunch of flat rocks for the path. Adam and I have spent countless hours picking up rocks in our yard, but they just keep appearing. I swear they are using my yard as a breeding ground or something, it’s ridiculous.

I had zero luck finding a bench, but I did find these two red chairs on clearance at HEB (our grocery store). They were $35 marked down to $21, which still felt kinda pricey but was way cheaper than any bench I found. 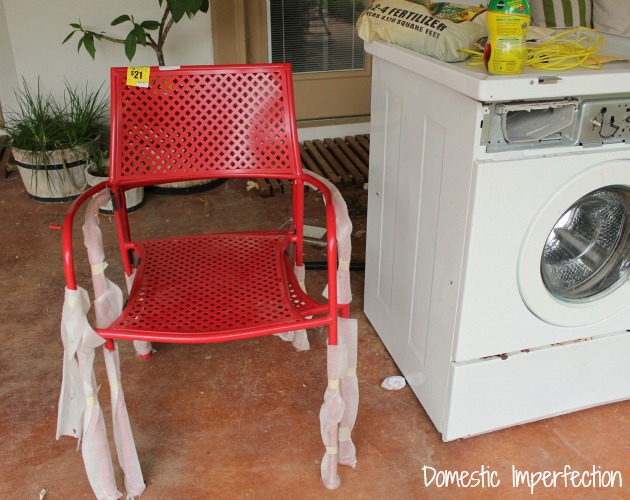 And yes, that broken washing machine that you saw in my wood flooring countertop tutorial is still hanging around. I know I just showed you pictures of the front of my house and the washing machine wasn’t there….or was it? 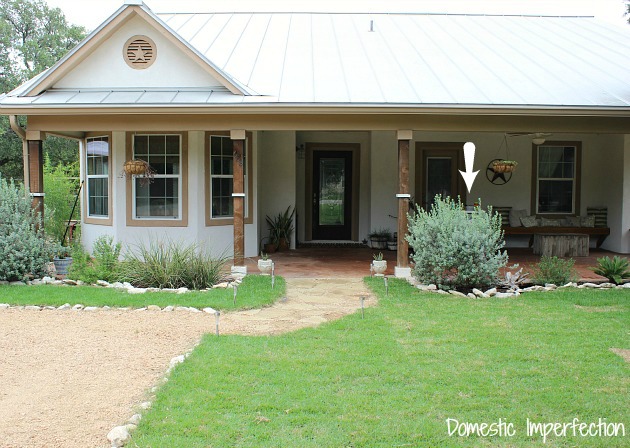 I know, so sneaky. Do you feel a little lied to…maybe a little betrayed? You should.

And now, to make up for my little white lie, I present to you a very honest after picture of my side yard… 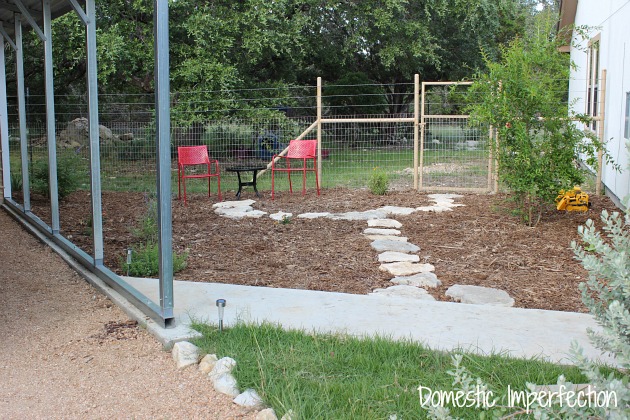 Okay, so it’s not very garden-y. It’s not super lush or have a ton of plants.  It looks good though, which is the opposite of what it looked like before.  I’m pretty stinkin pleased with it. 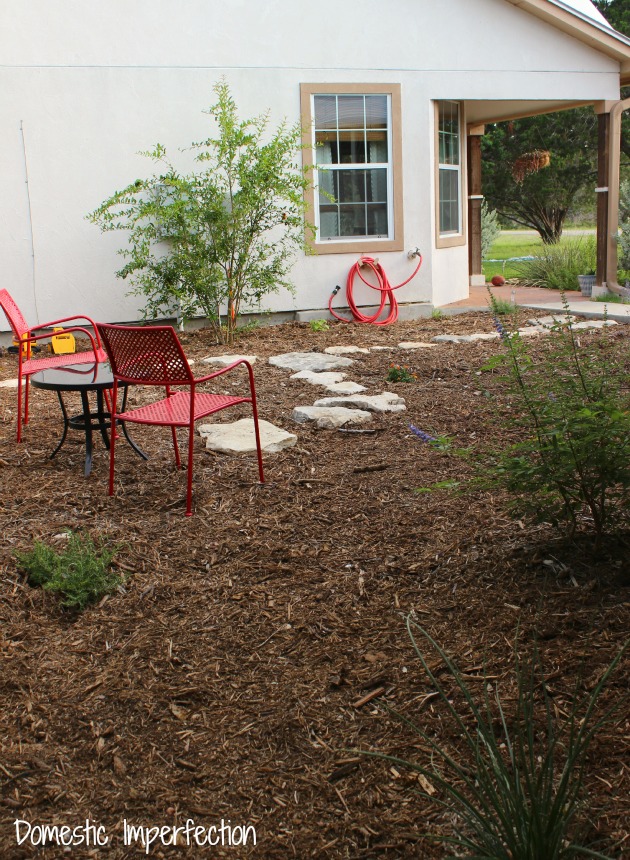 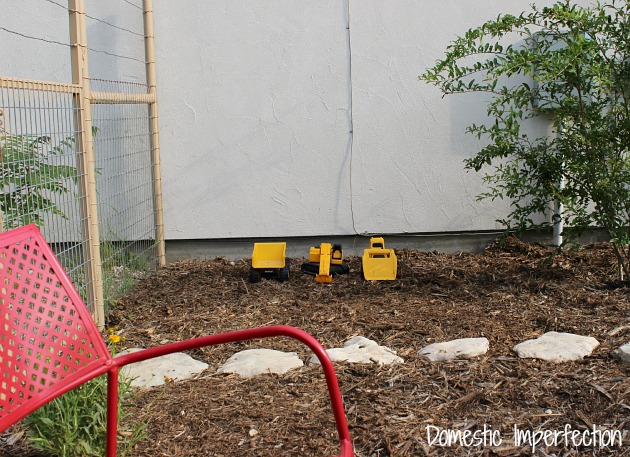 I don’t know if you noticed in the before picture, but the area was full of plastic kid tractors. A reader on my facebook page had suggested that I add a little parking lot for them in my side yard, and I loved that idea. I had planned on making a little rectangle out of decomposed granite (what our driveway is made of), but I quickly realized that it would last maybe an hour before being scattered about and therefore non-existent. So I designated the area between the fence and the pomegranate tree as the parking lot. I’m sure they will fill it up too, cause there a whole herd of tractors still in the backyard. 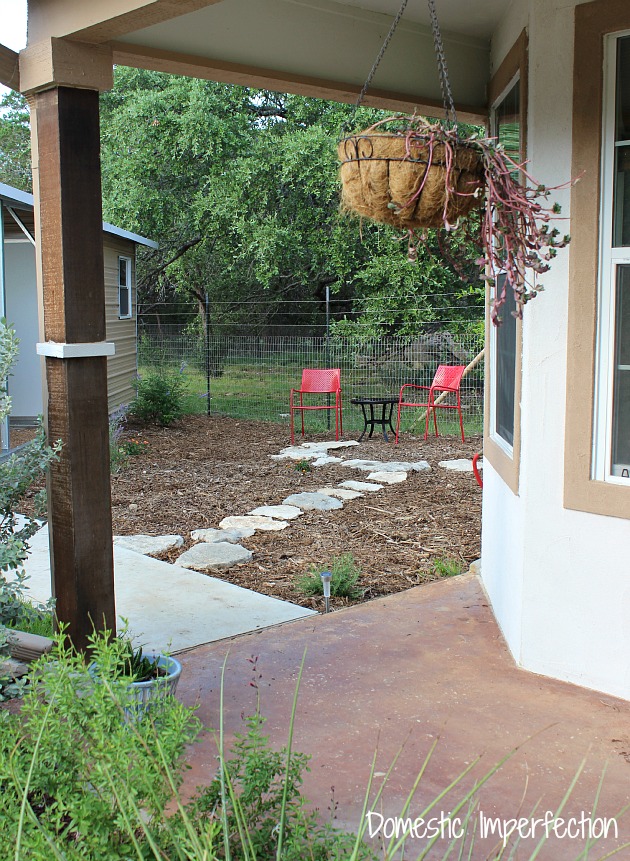 Here is a before and after… it look so much better. 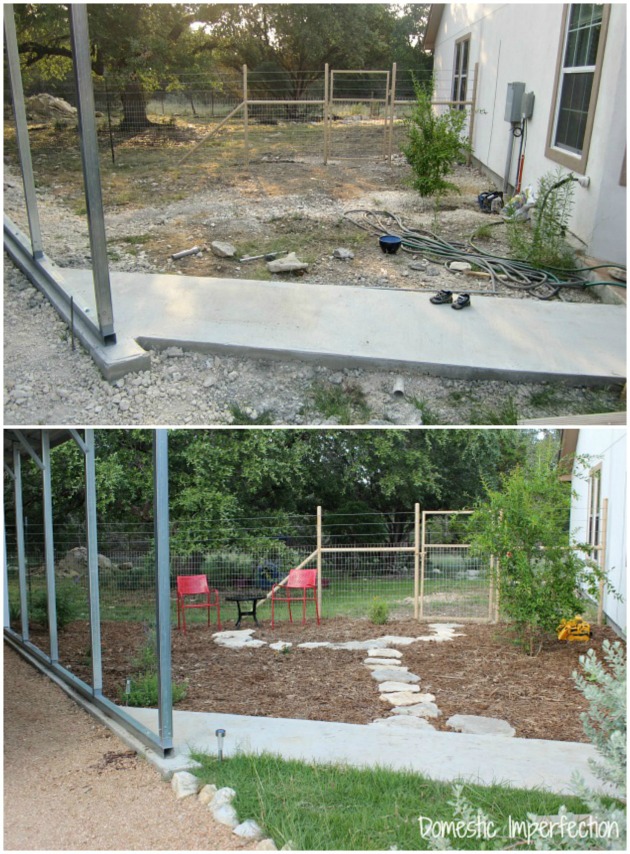 I’d like to add a birdbath and I tried to make one before I had to take after pictures…but despite my best efforts all I have right now is a big fat birdbath failure. 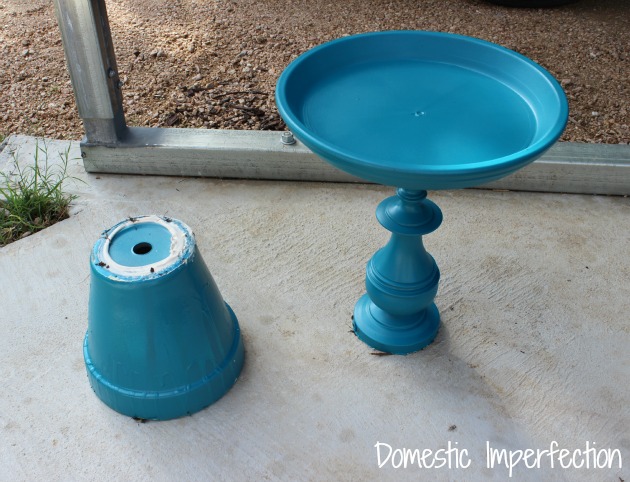 I’m going to turn it into a big fat birdbath success, and when I do I’ll post a tutorial.

« The Grass is Always Greener (Three Years of Yard Work)
The Official Domestic Imperfection House Tour! (And A Link Party) »