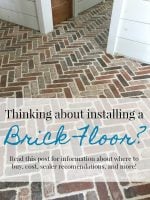 Y’all. The brick paver floor is finished and it turned out AMAZING. 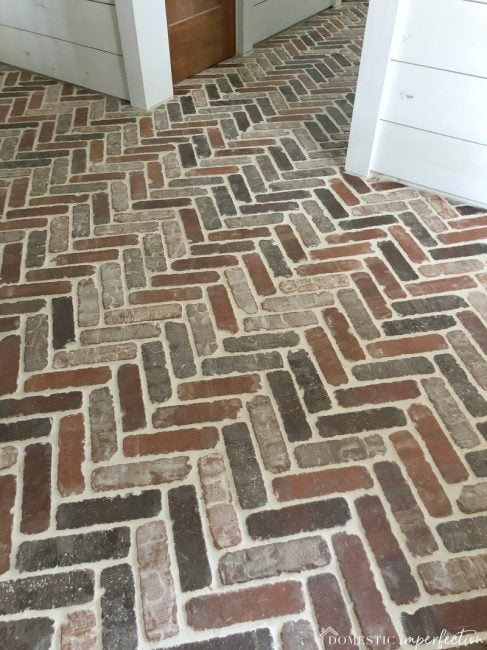 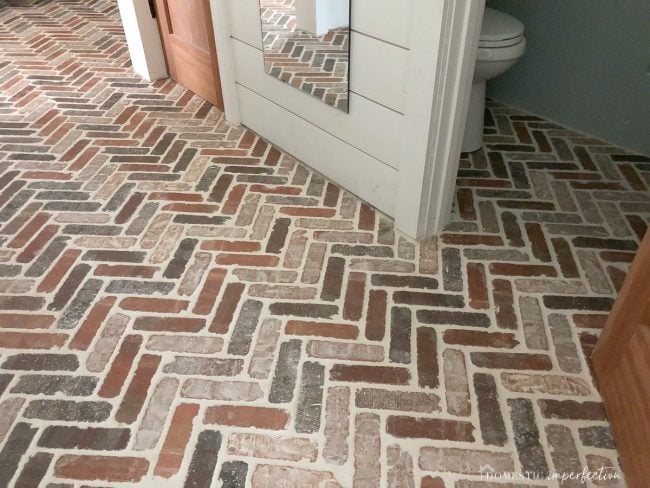 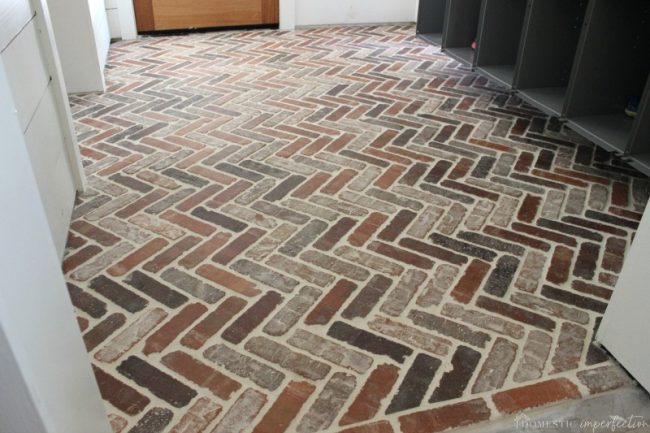 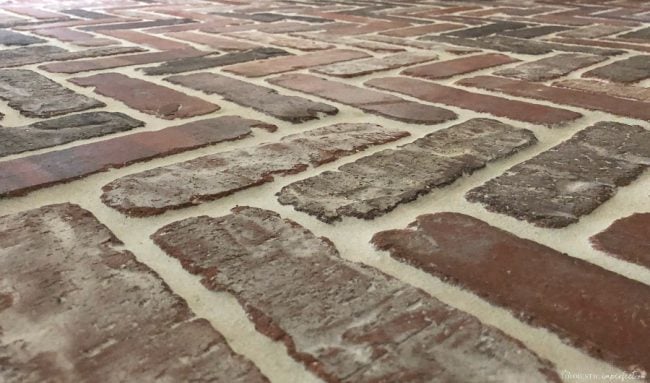 It is exactly what I wanted, which is impressive considering my list demands was pretty specific. I’ve seen plenty of brick floors that aren’t my favorite, so I was only interested in installing a brick paver floor if three things were involved….lots of earthy color variation, light colored grout, and a herringbone pattern. Oh, and not shiny. So four things. Knowing exactly what you want is a good thing, right?

My desire for a brick floor started a few years, back when I was spending all my free time on Houzz.com while designing our new home. I found a few pictures of brick paver flooring on there that I really, really liked.

I knew I had to put one somewhere in our house, and the laundry room and mudroom seemed like the perfect place.
The thing with interior brick flooring is that you almost never use real brick, it’s just too thick to work for most homes. We needed something that would be the same thickness (5/8 inch) as the engineered wood floor that will one day get installed in the house, so that the flooring transition will be even. So even though these look like real brick, they are actually a much thinner version. People call them all sorts of different things… brick tile, brick pavers, thin brick, brick veneer, etc. but it’s all basically the same thing. After looking for thin brick pavers for awhile I ended up finding lots of different options for a reasonable price at Home Depot, and I ordered four samples (they aren’t sold in stores). From left to right they are Little Cotton, Dixie Clay, Promontory, and Castle Gate. 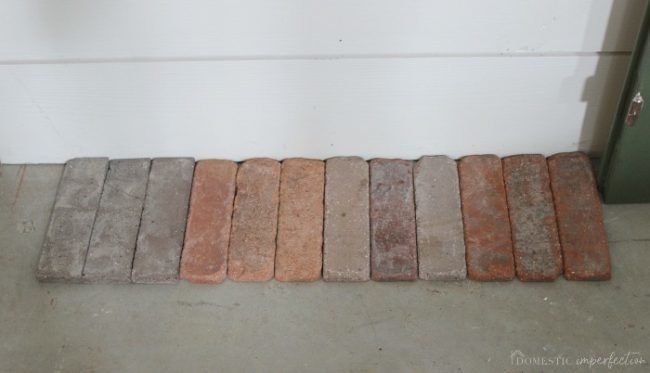 I ended up choosing the reddest one, Castle Gate. I really didn’t love the sample, but according to the pictures online it actually had a ton of color variation. So I ordered 27 boxes and hoped for the best.

Luckily it arrived with all the color variation I had hoped for. Whew! 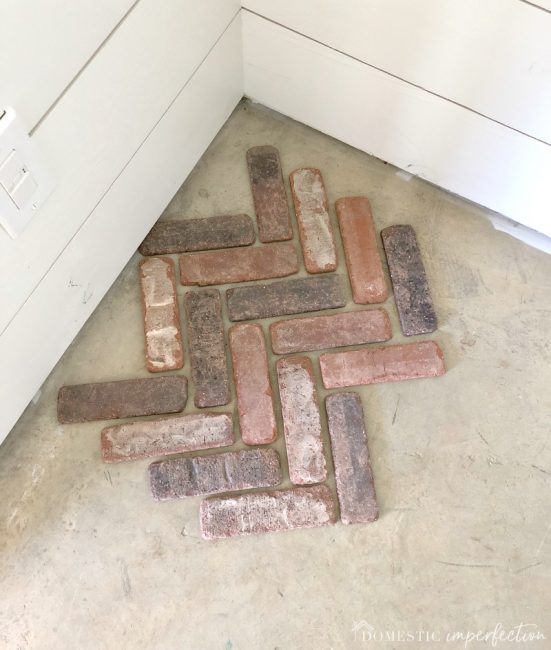 Then all that was left was to get started!

So Adam and I chose not to DIY this project. We seriously considered it and I know we could have done it, but in this case time was more valuable than money. Laying a brick paver floor would have taken us FOREVER, and the bid for labor only came back at $900. It was kind of a no-brainer, especially considering that we couldn’t use our washer and dryer for however long this project took. We’re a big family and I do laundry every single day, I need those babies functional and not sitting useless on the porch.

Alright, so the first step was an acid wash, which I have one terrible picture of… 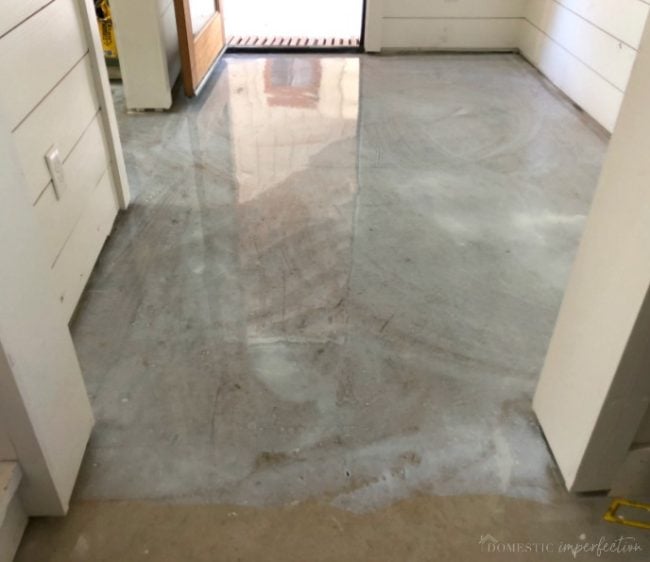 This is not a step most people should need to do. We had previously sealed the concrete floors though, and the sealer had to be removed so that everything would adhere properly. It sounds a little scary but isn’t actually a big deal, Adam and I did an acid wash in our garage when we epoxied the floor.

After the acid has finished its job, they added a thin layer of *something* to the floor. I honestly have no idea what it was and didn’t ask…I assume it was either for better adhesion or making sure the floor was 100% level. 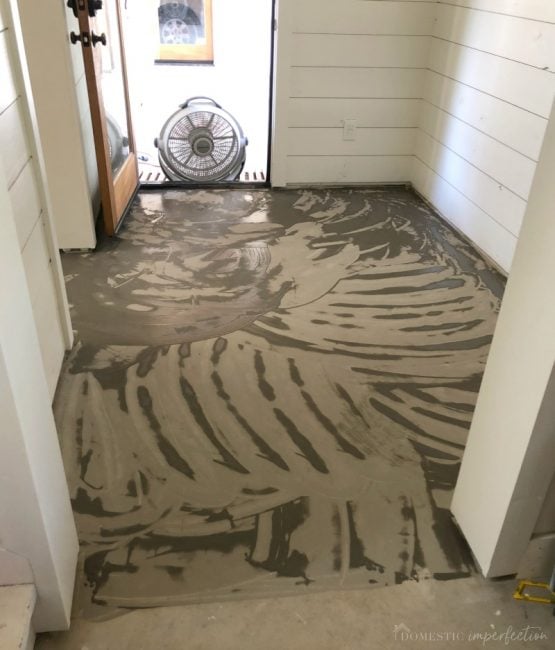 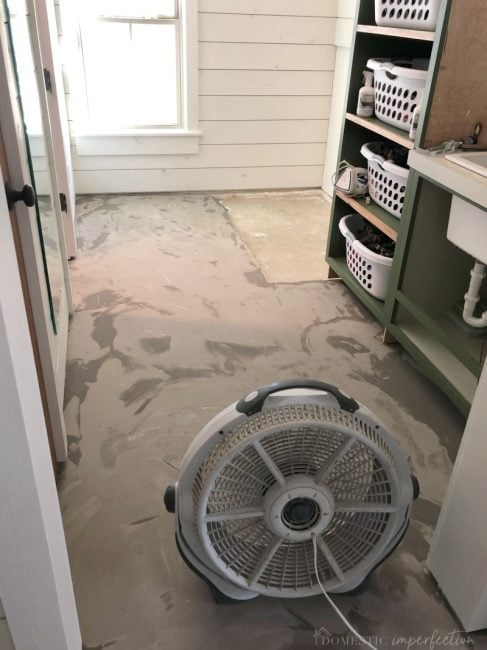 And then they started laying the bricks. 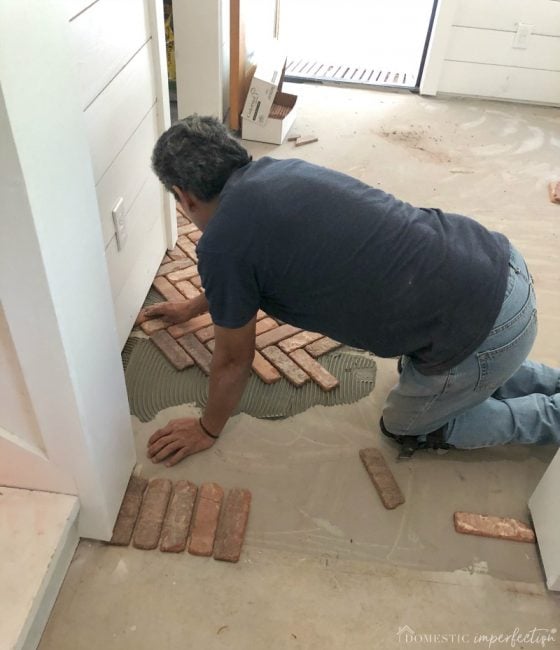 It took two guys two days, and I think I smiled the entire time. Not only because I could tell I was going to love it, but because I wasn’t the one having to do the work. As much I as I love DIY and hate paying for things, sometimes it SO NICE to just write a check and not have to slave over a project.

Anyway, here it is after all the thin brick pavers were in place. 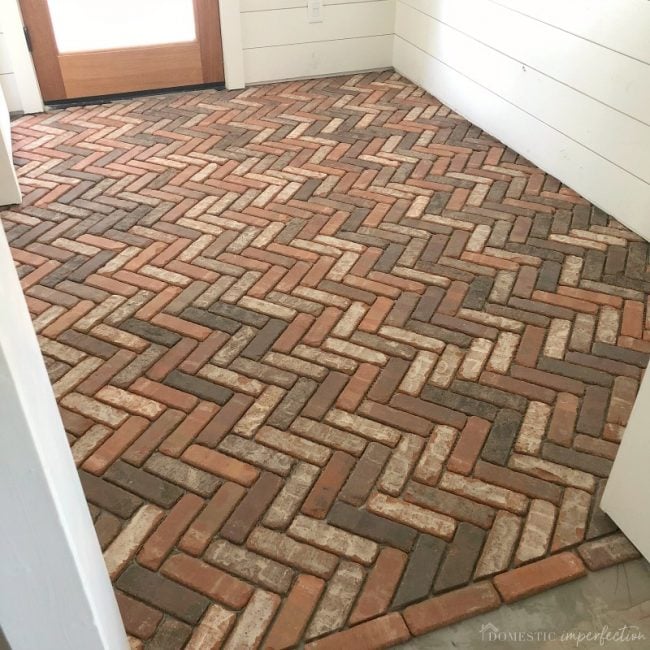 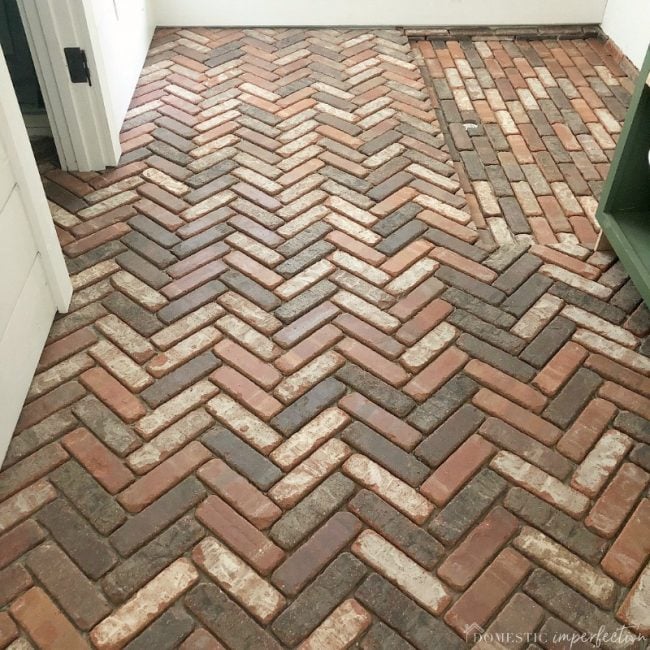 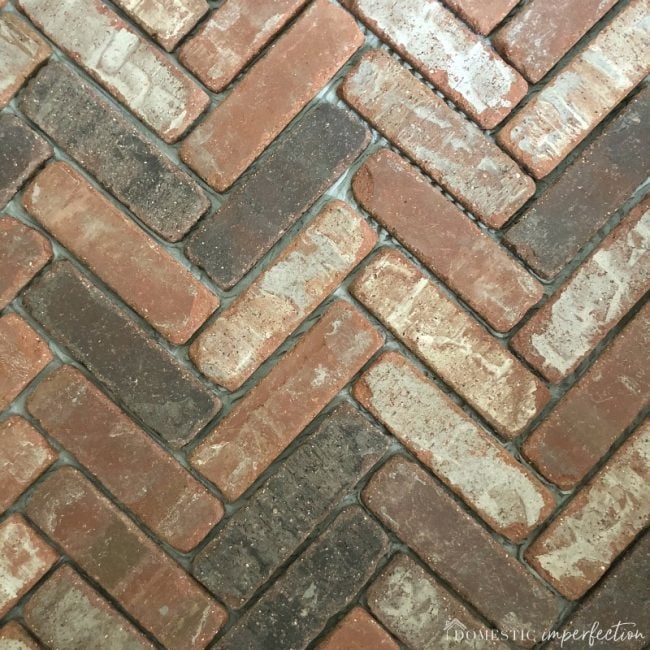 Next came the grout. I wanted something in the white family, something that would give the bricks some definition without being too bright or new looking. I ended up choosing color called antique white, and it was a perfect choice. 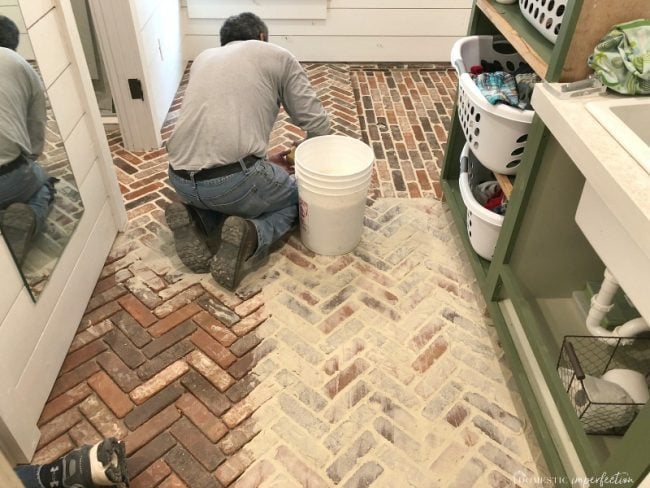 After the grout was dry it was time for the very last step, sealer.

Here is the thing about sealer…it usually makes things shiny. Even if you get a matte sealer, it often still looks like there is a plastic film over the top. I wanted my brick tiles to look completely naked, but still be resistant to all the stains that my family will inflict upon it. On my facebook page a few months ago a reader recommended Laticrete products, and after doing a little more research I bought their most hardcore and expensive sealer, Stonetech Bulletproof. 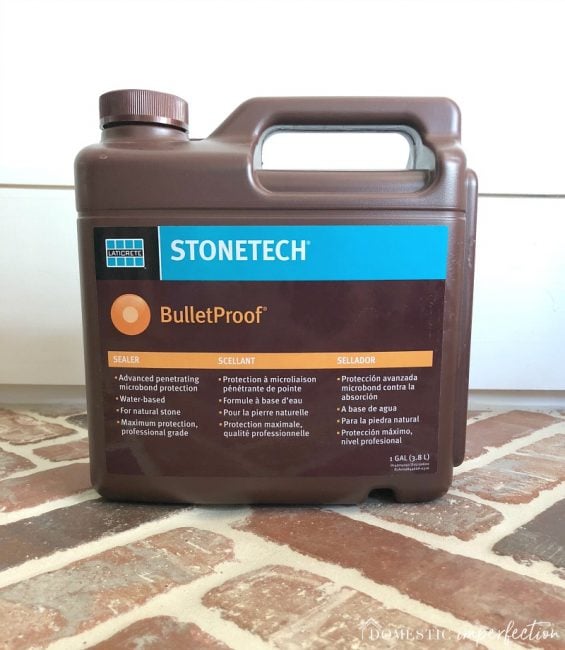 I’m happy to say that this stuff is amazing. It goes on like water and the bricks legitimately look naked…no shine, no film, no color change whatsoever. It works though, when Adam and I were reinstalling the bathroom toilet we tilted it too much and tons of that super blue toilet water (the kind you get from adding cleaning stuff to the tank) leaked all over the new floor. I freaked a little, convinced my white grout was going to be forever blue, but it just sat on top and waited for me to find a rag to soak it up. I think I’m going to reseal the other bathrooms with this stuff…four boys means I basically need rubber floor mats around the toilets in our house.

(I photographed it a few times to try and get an accurate representation of the color, it changes a ton based on lighting and time of day.) 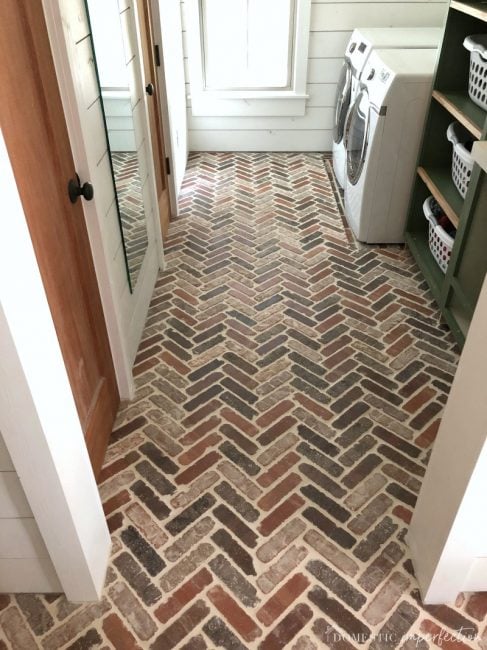 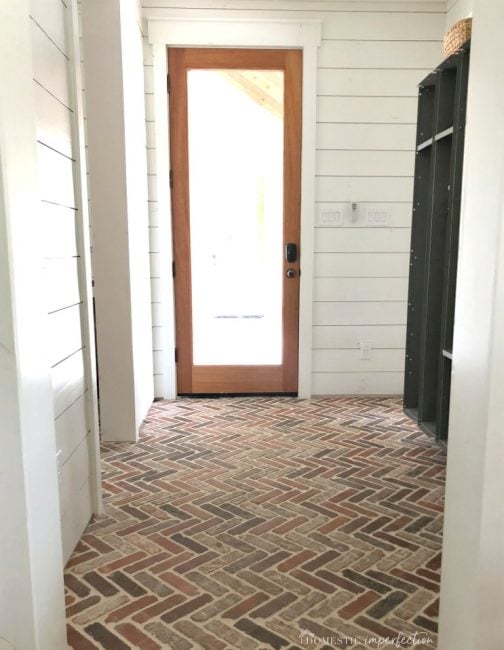 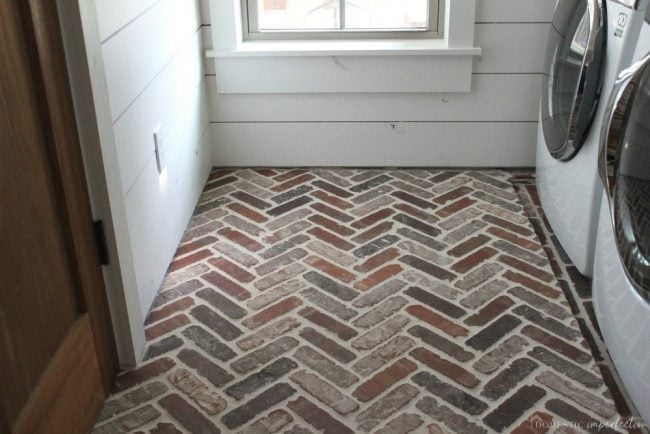 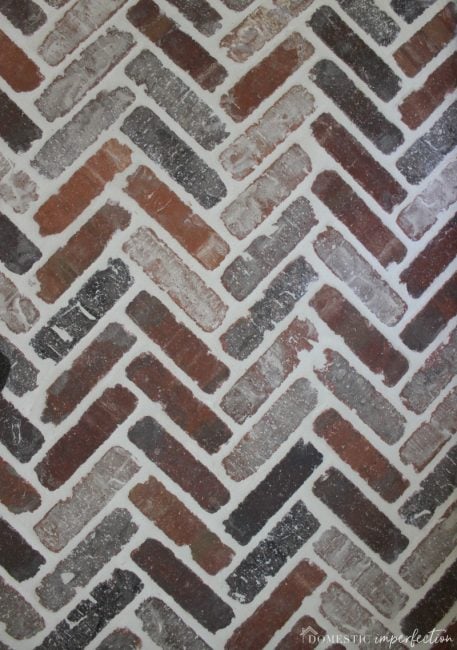 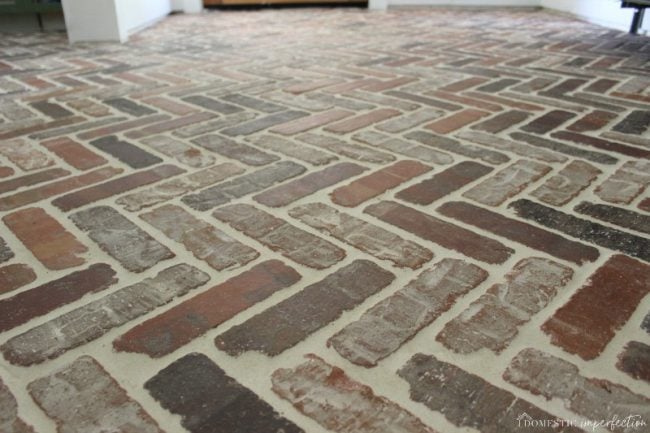 The men I hired did an amazing job, I wish all contractors were as detailed oriented and responsive as they were. The herringbone brick pattern makes this installation much more difficult than doing straight brick, and all the angled cuts they had to make looked like an annoying time suck. I mean, just look at the detail on this corner… (also, this photo is probably the most accurate color representation) 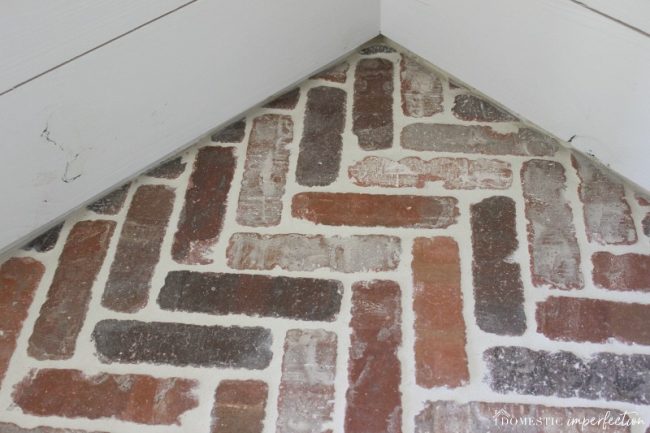 We still need to add trim around the base and told them that, but they still went under the shiplap and to the wall with perfection. Look at the detail around the washer and dryer inset… 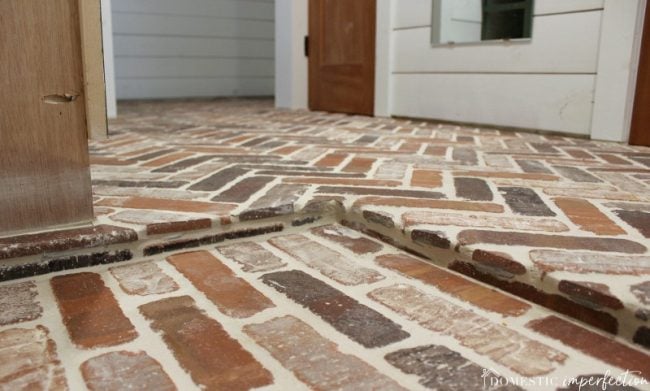 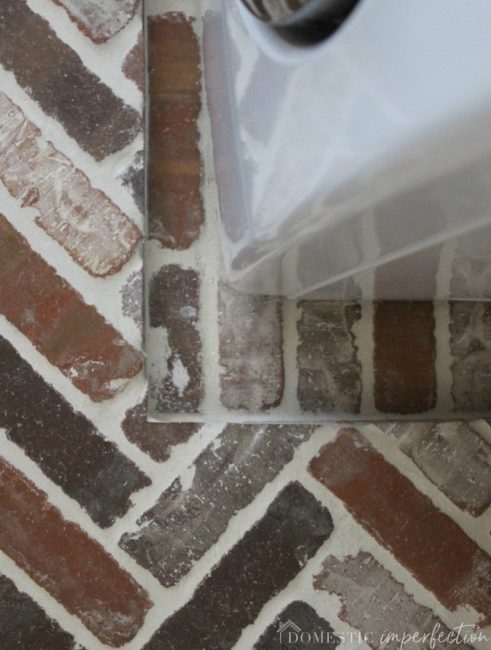 Anyway, if you can’t tell I’m pretty thrilled with the final result. The laundry room and mudroom are finally coming together!

Alright, so let’s talk cost. As you can imagine, brick pavers are not the cheapest flooring option. Here’s the breakdown-

I actually hadn’t done the cost per square foot math before now, and it hurts a little to see that number. Thank goodness I love it, right?

I posted floor progress on Instagram a few times and people had two main question, so here they are…

How does walking on it feel?

Expensive, haha. But seriously, not bad at all…no one in my family has any issues walking on them barefoot. The floor is bumpy but not uneven (if that makes sense), it’s not like I’m going to trip over a rogue brick or anything. They are brick though and not exactly forgiving, so standing barefoot on them for hours at a time wouldn’t be ideal, but this isn’t that kinda of room.

How do you clean them?

I’ve only had them a few weeks so I’m still figuring that part out. Finishing your brick floor with a good sealer (and reapplying as necessary) it probably the most important part of keeping them clean. Other than that sweeping or vacuuming needs to be done regularly, dirt does tend to get caught in the low part between the bricks. I haven’t mopped them yet, but I’m not scared of it either. The good news is that it’s a busy floor, so they pretty much will never look dirty, even if they are (or is that bad news??).

Anyway, I can’t think of any other pertinent information, but if you have a question please leave it in the comments below and I will be happy to answer!

How to stencil a concrete floor

How to make a penny countertop (and what NOT to do) 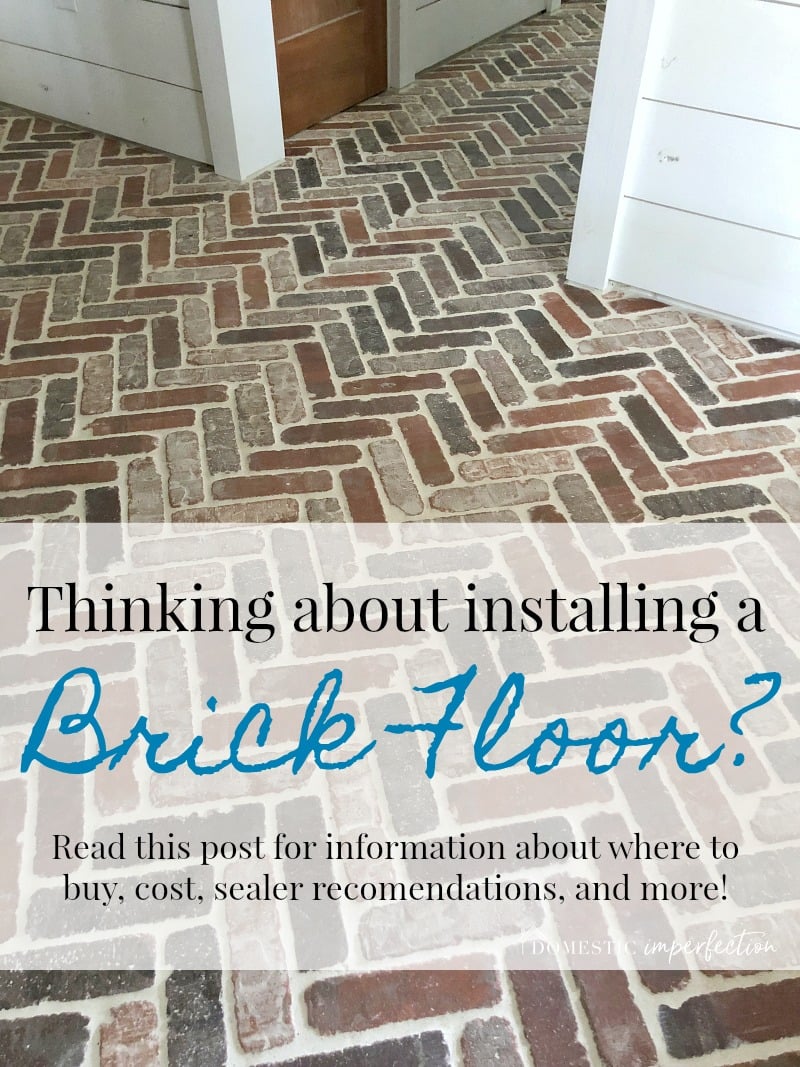