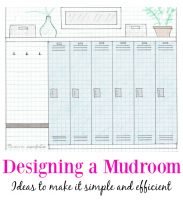 The first project of 2018 is going to be the mudroom, and I don’t think I could be more excited about it. I’m ready. I’m ready for some storage and organization, ready for something new and pretty, and mostly just ready to have another finished room in the house. As a reminder, here is what our mudroom looks like at this exact moment. 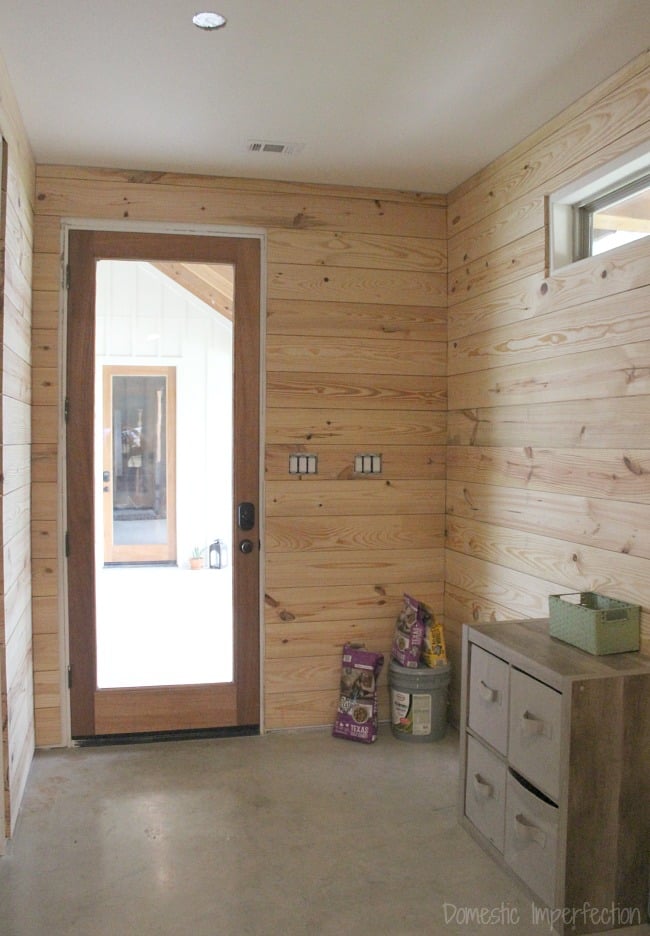 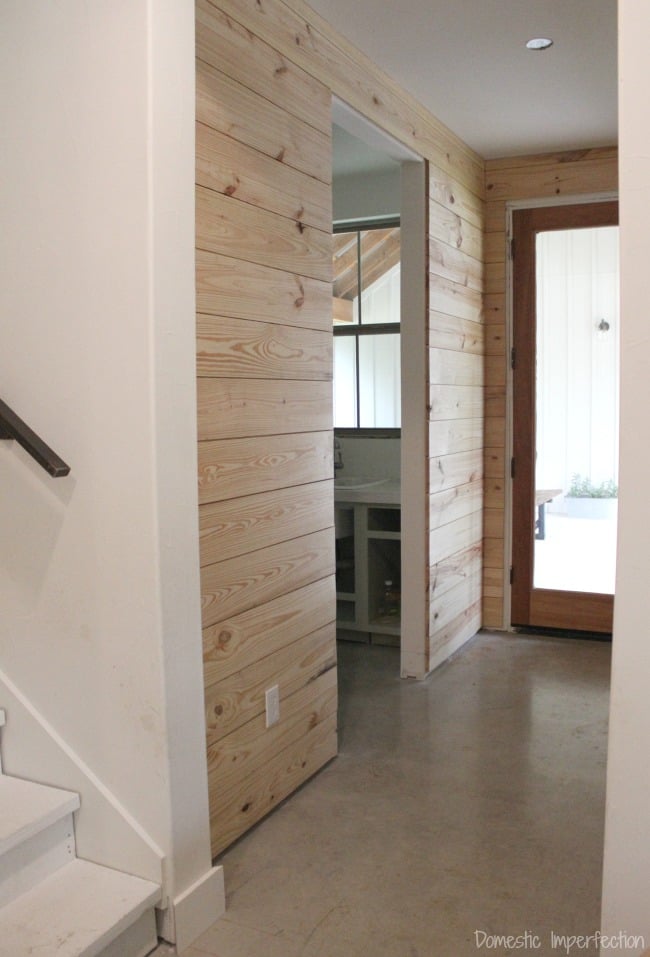 At first the plan was to custom build something like the below photos – six wooden lockers, built to take up the entire wall. They would have individual drawers for that all-important entryway shoe storage, a cubby with hooks above, and narrow bench to sit on.

I knew I wanted the cubbies to have doors (to hide the mess inside) but not something too solid…I was thinking expanded metal or something else kinda cool and different (like the next two photos). I wanted to try to make them wooden, but if that was too hard we would just make them paint grade.

So that has been the plan for a couple of years now. But now that the mudroom is next on the project list it is sounding like a really big task. Admittedly, this is mostly an Adam project, and I could tell he was really not looking forward to it. So one night I was determined to figure out a much simpler way to accomplish the goal AND make it a fun project. So around 1:30 AM one night was sitting on the floor in the mudroom, perusing Houzz for ideas and measuring things everytime I found an idea I liked.

Then it hit me…why not use REAL lockers? Like the metal ones you use in school? They would be prebuilt, and then we could just build them in to look pretty and custom. So I dove into locker research and found that they come in standard sizes, none of which would correctly span the distance in our mudroom. BOOO.

Sometimes you can be so stuck on the idea that you are totally blind to the easy, obvious answer that is right in front of you. I started having fireplace flashbacks and realized that the cubbies didn’t have to be symmetrical. Maybe they didn’t need shoe drawers with a little bench on top for sitting to put on shoes. Maybe we could make something that is easy and functional without even having to move the outlet and switches to make room for cubbies. And so in my 1 AM excitement I stayed up till 3 AM and drew this… 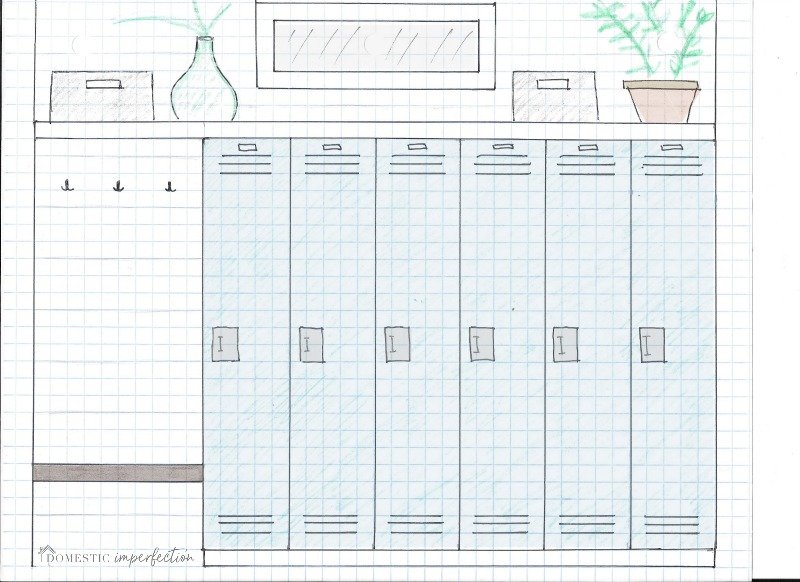 When I did finally get to tell Adam about my idea I was hoping he would jump up and down and squeal with me about how wonderful and simple it was. He didn’t, at all…but he did the Adam version, which is to immediately grab a tape measure and start measuring things and talking ideas and specifics with me. This is my favorite part of a project (besides the final product of course), when things are finally coming together and Adam and I are both excited.

So the new plan is to get six lockers that are 15 inches wide by 18 deep. They come in three-inch increments, the standard being 12 x 12. We need a little bigger than that, and if you go 18 inches deep you can put a rod in there for hanging coats and uniforms and whatnot. Hopefully I can find them in either a light blue or a tan color, and we will build them in to look custom. I’m having trouble finding an example online, but this gives you the idea… 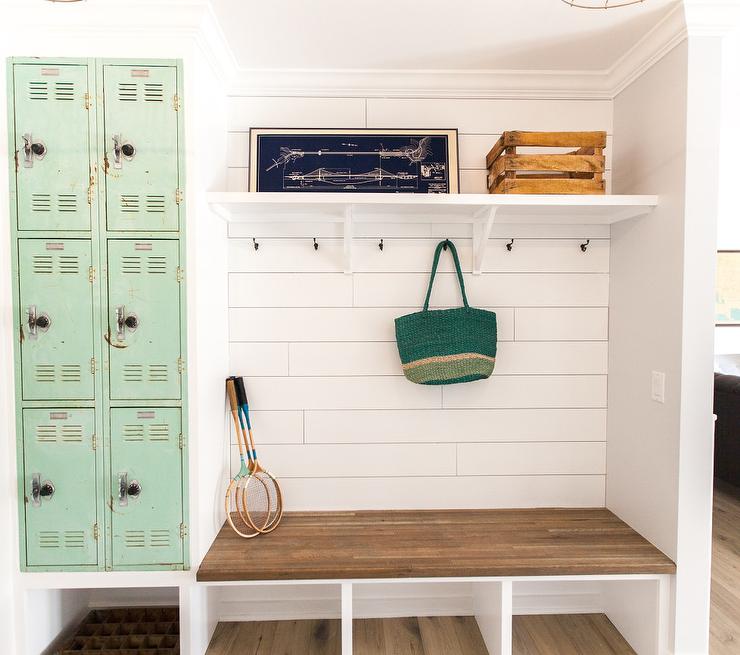 To the left of the lockers, near the mudroom door, will be a wooden bench with hooks behind it for guest coats and purses. The best part of this plan is that because of the open bench we won’t be having to move the switches and outlet on that wall. That would have been a big deal, and now it’s not an issue at all.

The floor is going to be brick herringbone, and I plan to use brick veneer from Home Depot. I ordered samples this morning, all I know is that I want something in an earthy color with a light grout, no red brick or anything like that.

The planked walls will be painted white, and the opening to the laundry room and bathroom will get a wooden barn door (which will probably stay open 99% of the time). To the left of that I want to do a command center for the boys, something with their chore charts, house rules, sports schedules, etc.

So that’s the official plan, I can’t wait to get started!

Want to see how it all went down? Click the links below!

Everything I learned about Painting Shiplap 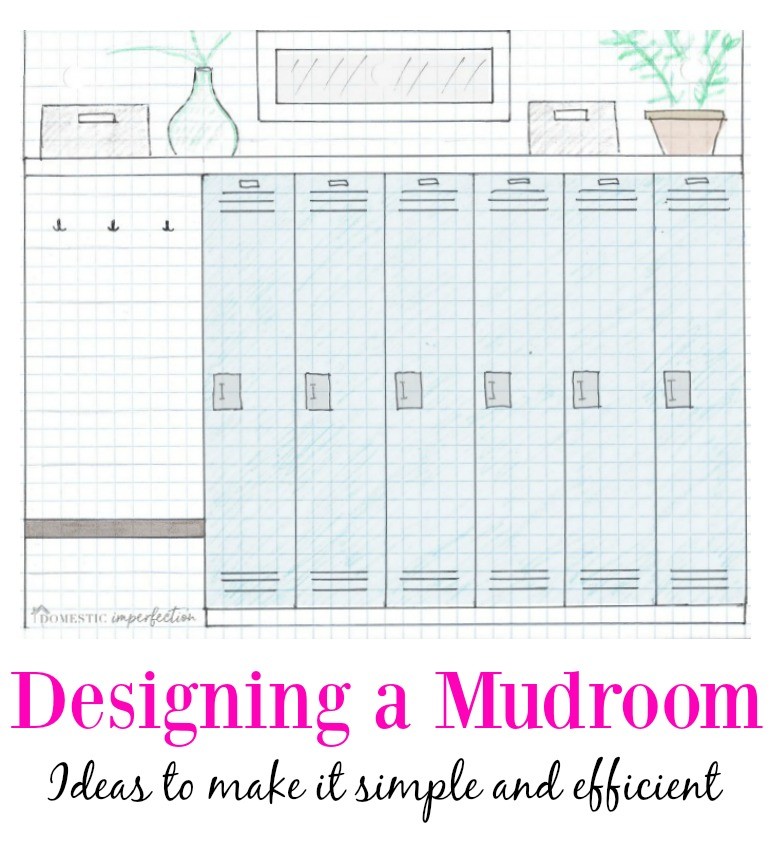