83shares
This is a Sponsored post written by me on behalf of Moen, Incorporated for SocialSpark. All opinions are 100% mine.

The bathroom remodel continues, this time we are replacing our old sink and faucet. I’m really excited about his part, you’ll see why…

So here is the previous vanity. It’s bottom of the line apartment chic, not to mention too small for the space. 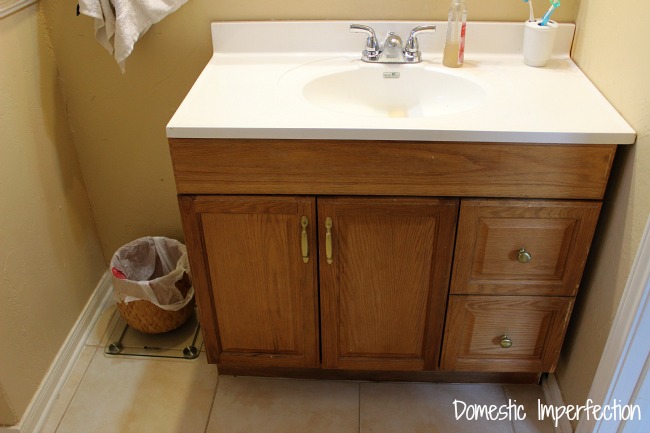 There was a few problems with our current faucet/sink. First, it was disgusting (I say was because it’s currently sitting on our front porch). The counter/sink (it’s one solid piece) had a sand-papery texture which makes it impossible to clean. I thought it was mineral build-up, but tons of vinegar and cleaners had no effect on it. Second, the faucet leaked so bad that Adam had to shut off the hot water valve to keep it from dripping constantly. He did that TWO YEARS ago. We’ve just never gotten around to messing with it again. Lastly, the faucet squeaked like you wouldn’t believe. It squeaked so bad that when you used it in the morning it would *sometimes* wake up the kids. Not all the time, but the thought of possibly waking your sleeping toddlers at 6am will strike fear into the hearts of even the bravest of parents. Lets zoom in on that lovely squeaky faucet. 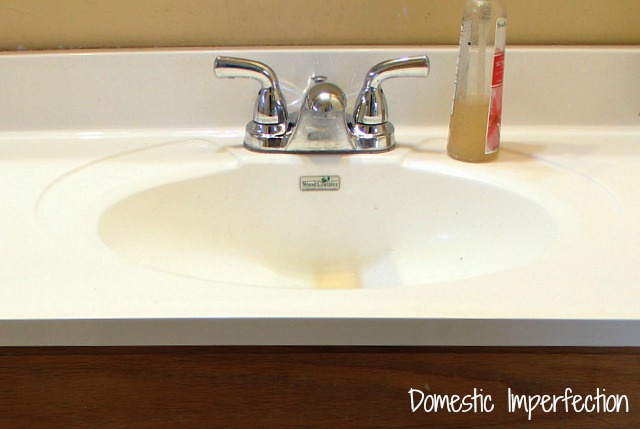 Okay, it really doesn’t look that bad in the picture, but I swear, it was. You know what the problem is? I’m just too dang good at taking pictures. My superb photography skills somehow hides flaws, which is great for most of my projects but really bad when I’m trying to explain just how badly my faucet sucks.

So anyway, last month Moen contacted me to see if they could send me a free faucet in exchange for a post. I casually responded with something like “I guess that would be okay, you know,  if I can find the time and all.”

I’m lying, that’s not even close to what happened. I was totally like “HECK YES…hot water baby!” 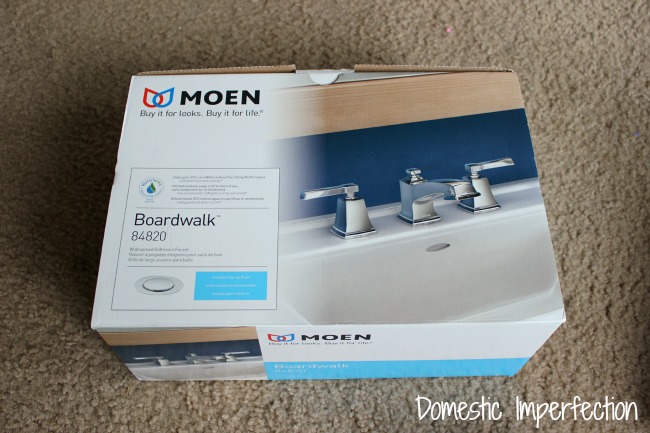 I know this is going to come as a huge surprise to you, but Adam usually does the plumbing stuff around here. Okay, so no one is surprised. But this time I decided to tackle this faucet myself, even though Adam was perfectly willing. It can’t hurt to add a little knowledge and experience to my DIY arsenal, right? I even decided to time myself so that y’all would get an idea of how long it takes a true beginner to install a new faucet. I didn’t even read the directions first. I mean, I obviously read the directions, but that was after I started my timer.

Instead of giving y’all a boring tutorial (that’s what directions are for, right?) or skipping over the whole process, I made a spiffy “installation collage”, if you will… 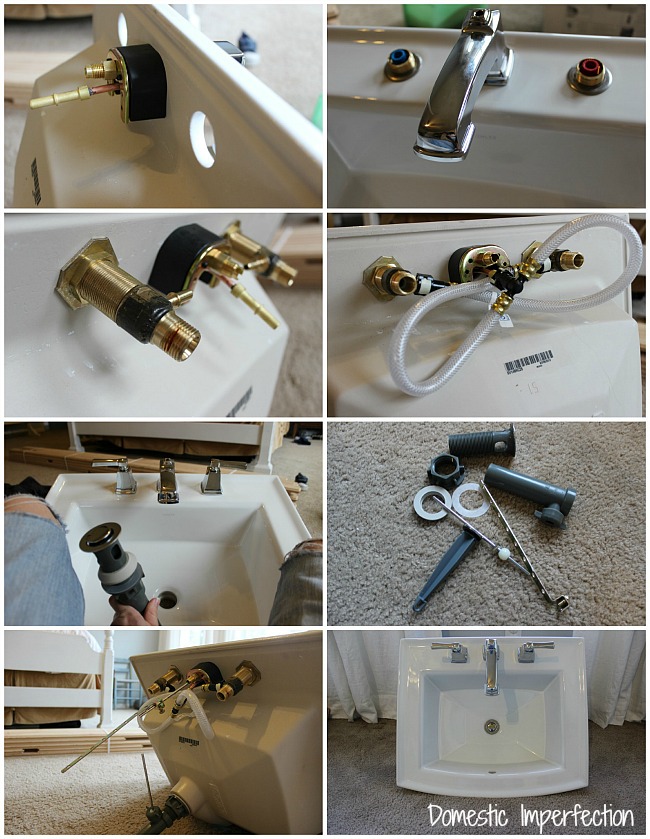 Granted, mine was a little easier because the sink is also new and hasn’t been installed yet, but I also had an over excited three year old “helping”, so that erases any advantage I may have had. 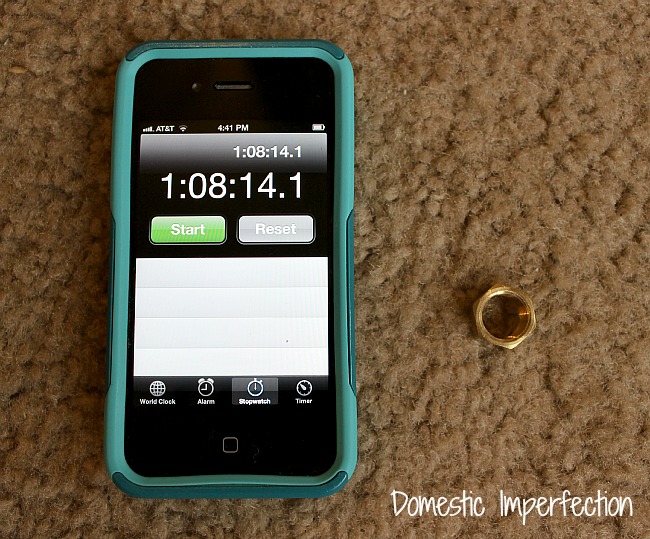 Also, I had one leftover nut. I triple checked the directions and cannot for the life of me see where it was supposed to go…I’ve come to the conclusion that Moen just likes to supply you with extra nuts, just in case. So thoughtful of them.

When Adam got home from work that day I told him I had installed the faucet and he said “great…how long did it take you?’

“A little over an hour”

“OVER an hour? Don’t post that on your blog, that’s embarrassing”.

Pshaw, embarrassed.  If Adam isn’t embarrassed to have pictures of him DIYing in socks and sandals posted all over the internet then I’m not embarrassed to say that it took me over an hour to install a faucet. 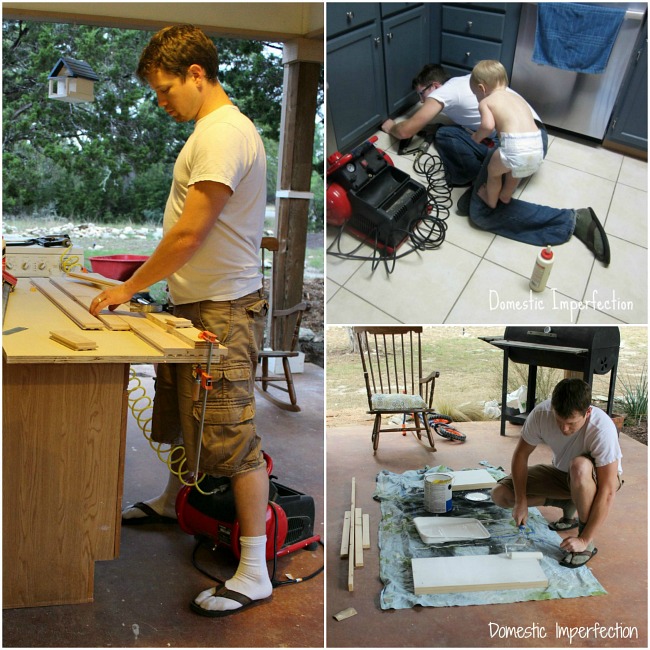 Such a hot nerd, that one.

So here is my new faucet and sink, shiny, smooth and quiet. Leak free, as well. 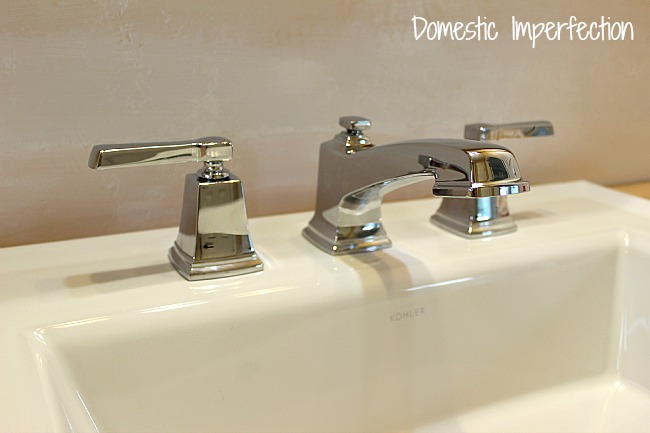 The sink is by Kohler and we bought it on Amazon, he faucet is obviously by Moen and is called the Boardwalk Spot Resist bath faucet, you can buy it at Lowes.) 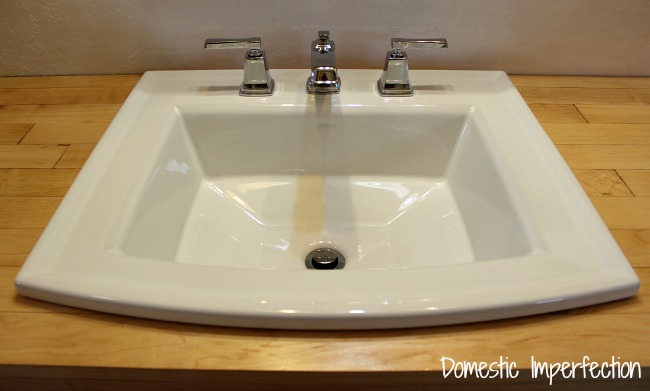 And that’s that!  Next we have to figure out how to fix the countertop and how to get the drawers back in the vanity. Then, I paint!

Also, I’d like to take a second to thank my husband for always being such a good sport.I tease him a lot on the blog and he just laughs along with me. He’s never asked me not to write something or change a picture, not even when I “hey girl”ed him in my party post and my paper bag floor post. He just laughed when he happened upon a collage of himself looking like a fashion nightmare while proofreading this post. He is a great bloggy husband and this blog wouldn’t be nearly as interesting if he didn’t let me exploit him a little. Thanks baby.

« Bathroom Remodel – Build A Counter Out Of Wood Flooring
In the BlogLight! »