Originally Adam and I had planned not to sell this house until after we move into the new one. Our current house is paid off, and we figured that one of the advantages of not having to carry two mortgages is that we can move at our leisure. We were planning to finish the new house as much as possible, move our stuff over (slowly, because I’m going to purge the crud out of it as we go), fix up all the lingering details on this house, then sell it while it’s nice, empty, and clean. Because really, the last thing I want to do is be showing this house while we live in it. Keeping it sparkly clean and show ready at all times with three little boys and ongoing projects sounds not only terrible, but pretty much impossible.

But, plans changed once we sat down and crunched numbers, as they tend to do. Even though our former plan sounded like a pretty sweet way to move,  financially, the crappy stressful way makes much more sense. Of course it does.

So now it’s time to seriously start tying up loose ends at our current house. And by loose ends I mean unfinished projects. A whoooole lot of them.

The first room I decided to go through with a fine tooth comb is the boys bathroom. We worked on it quite a bit a few years ago, but we never completely finished. Here is a before picture… 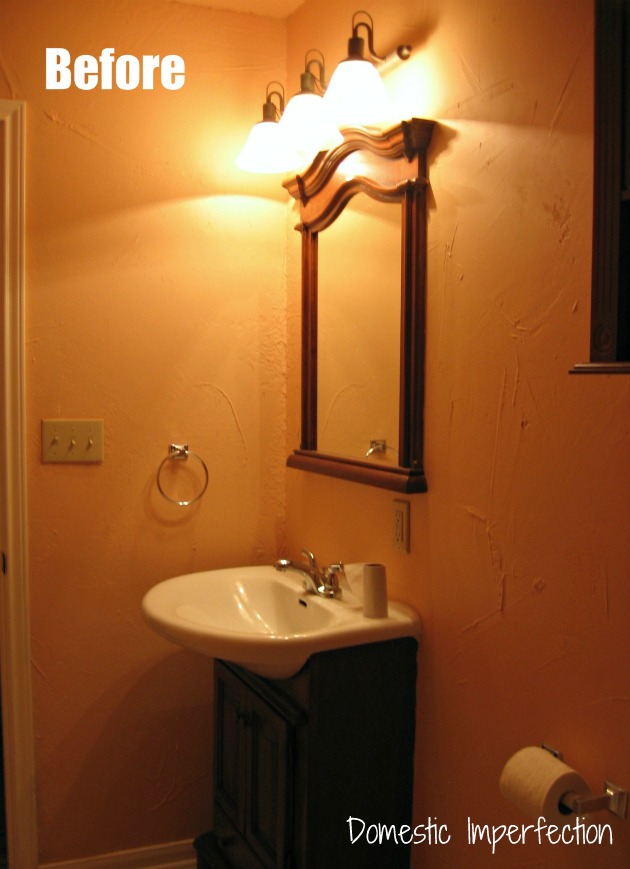 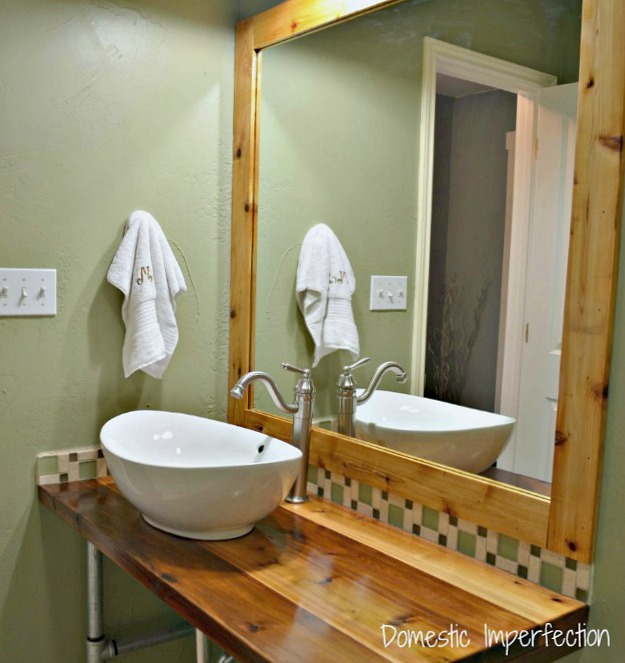 If we’re being honest, I never loved this makeover. I like where we were headed – and think it has some really cool features – but I have always hated that the cedar is bright (practically glowing) orange. Also, the backsplash is a polka dot failure, and I have come to realize that vessel sinks are basically the worst. Live and learn.

Anyway, that’s not the point…the point is I gotta make this beast look glorious so it will sell in a hot second.

I started by touching up all the paint… 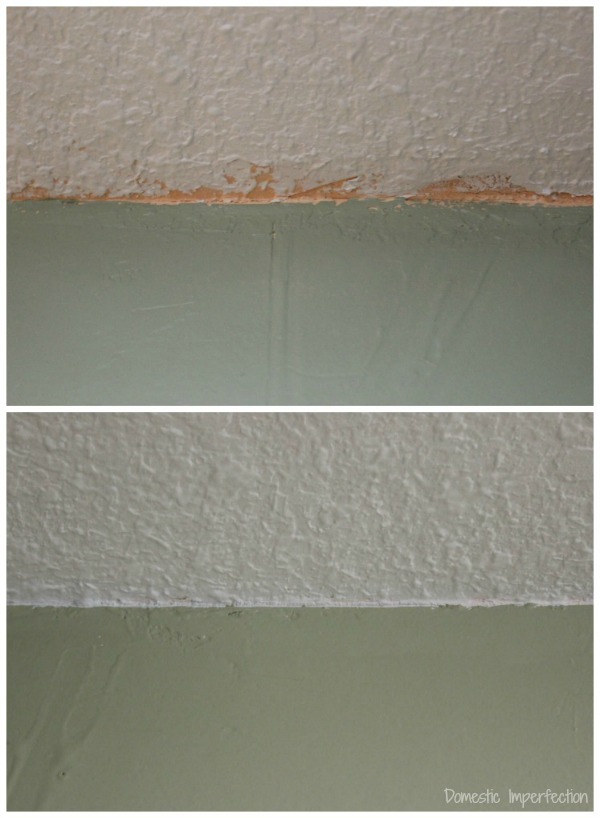 The plan from the beginning had always been to install crown moulding throughout the house, so when painting I was super sloppy where the walls meet the ceiling. It’s like that in nearly all our rooms.  (That pink is the original color of the house. You can see it here).

Then I caulked and painted the baseboards, which, after putting it off for about three years took me all of 30 minutes. 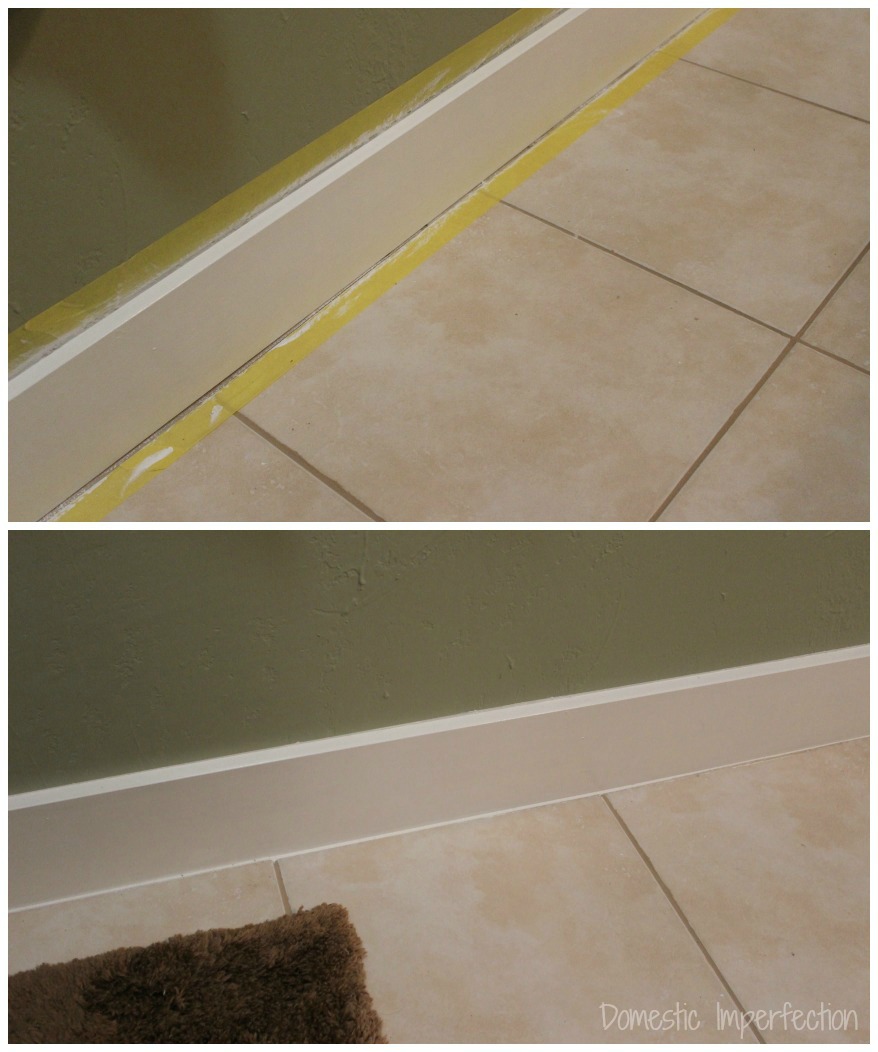 Then it was time to address the issue of storage. I had always planed to put some sort of storage under the vanity, but never actually did it because the drain pipe was in the way. 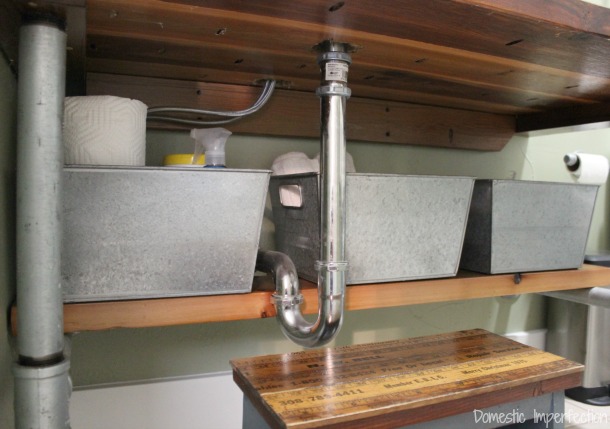 To make things easy (and avoid spending hours making a super custom shelf) we just used a cedar 2 x 6 and slid it behind the drainpipe to make a shallow shelf. I bought three galvanized bins that fit perfectly on top, and now there is plenty of storage. 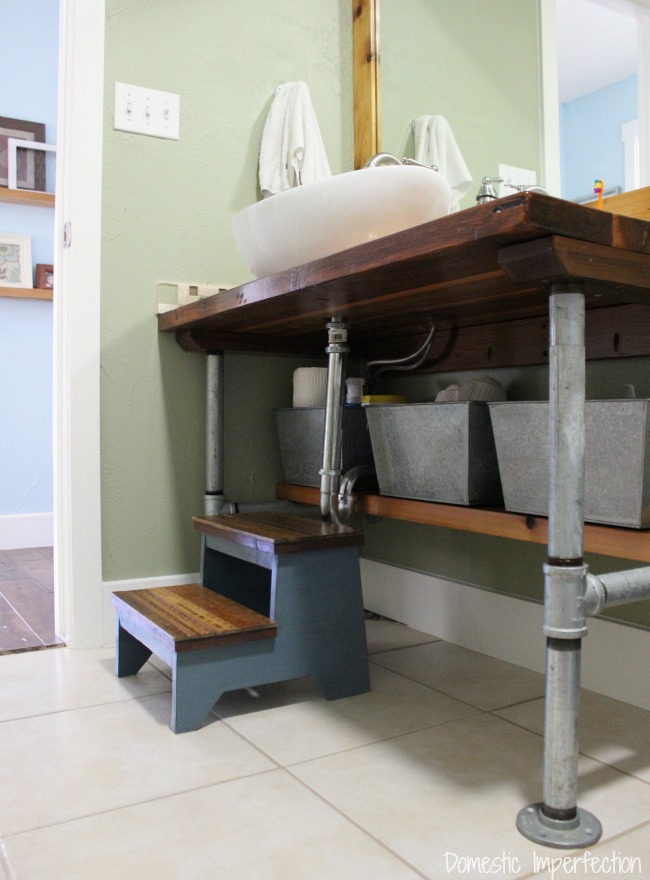 Other than that I added some simple finishing touches, like a cute soap dispenser and toothbrush holder… 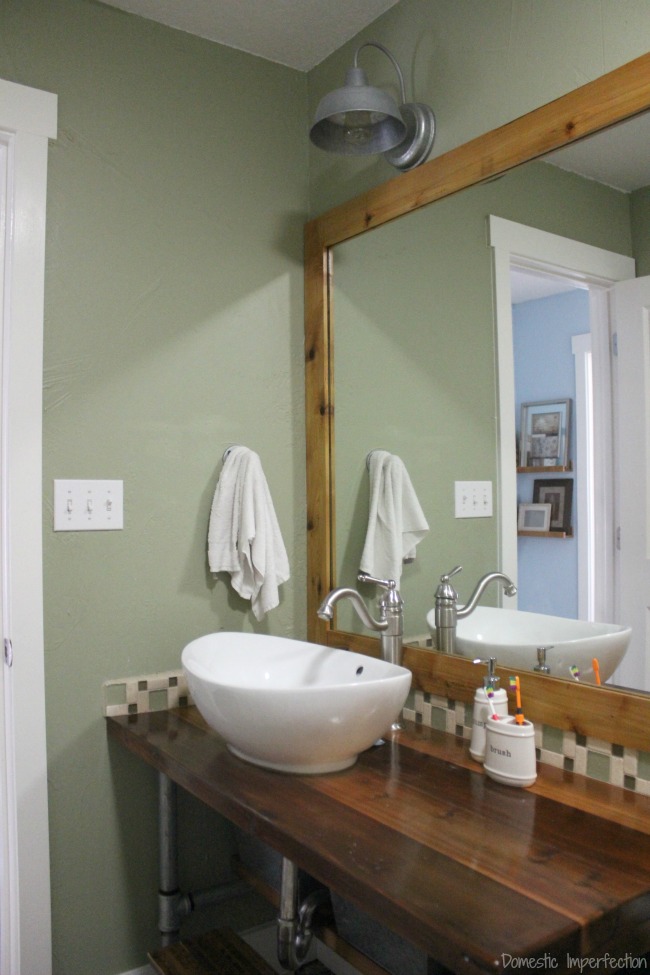 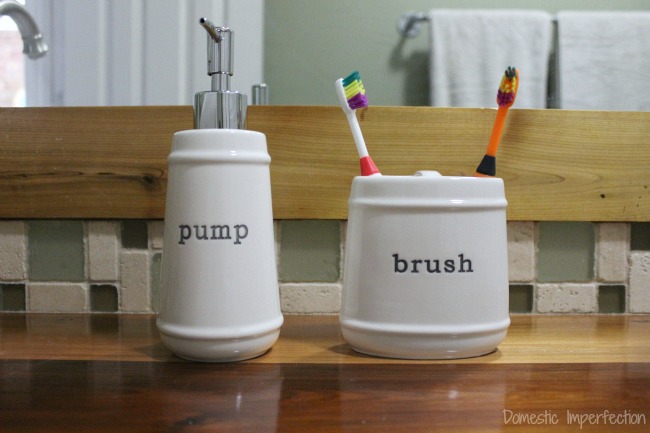 …and some update shelf decor, including some fake succulents, a rustic white frame, and a candle. 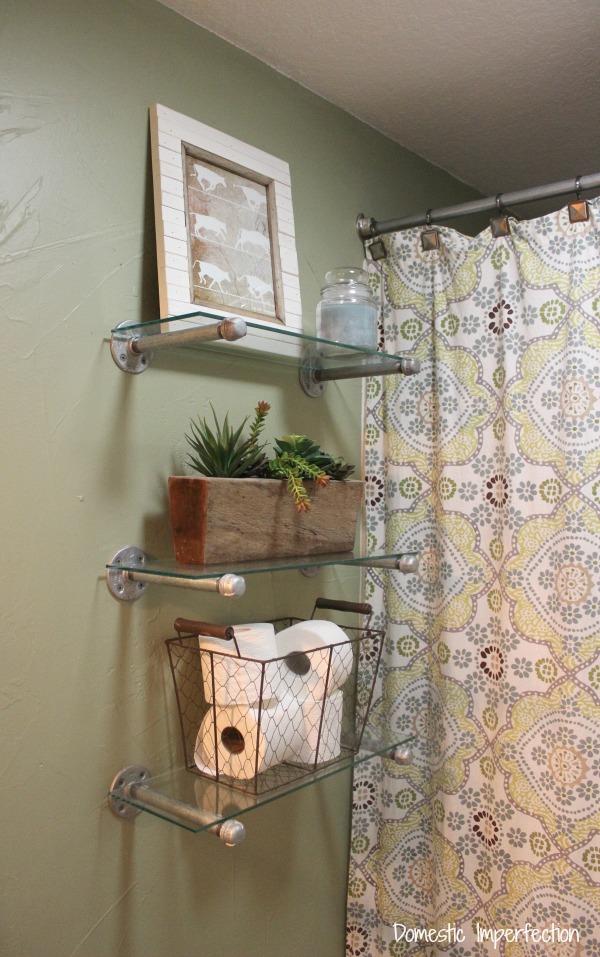 Ahhh… one room down, about seven to go! 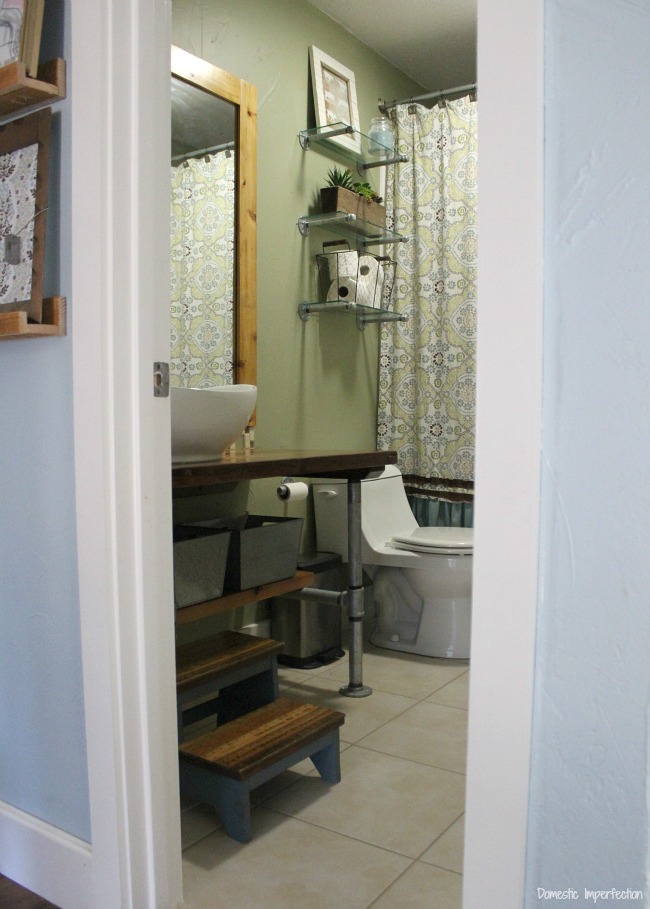 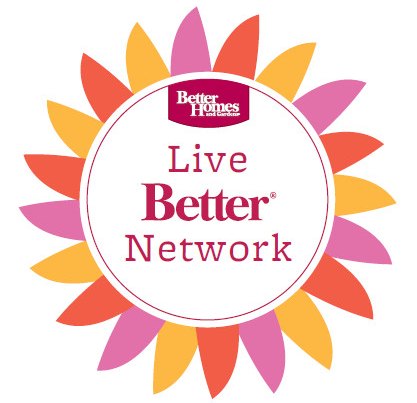 « Drywall Changes Everything
2015 Year in Review »