from World Market. I already had a perfectly good shower curtain  from Target, but it was kiddie themed..and as much as I try I just don’t like kid stuff. So I ditched it. This one is beautiful (although it – and the entire bathroom – photograph terribly) but it has the same problem that 99% of shower curtains have. It is too dang short. It’s like my bathtub is wearing high waters.

If I hang it to where it covers everything it looks too small, and if I raise it to where I want it to be then it doesn’t even cover the tub. Not okay. So I found fabric that (kinda sorta) matched and set out to make my beautiful short curtain into a beautiful long one. I made my fabric about three times as wide as the curtain so that I could make ruffles . To make big  ruffles all you do is loosely sew a tread the length of the fabric and then bunch the fabric up on that thread. I hope that makes sense, and if not the pictures should help…

Then I sewed it to the back of my curtain. 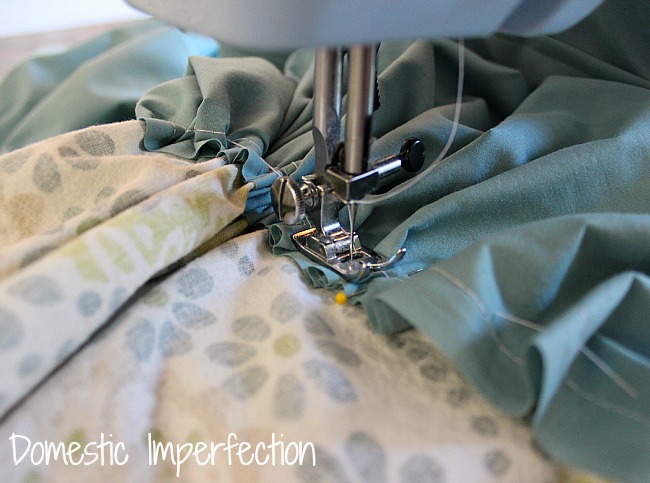 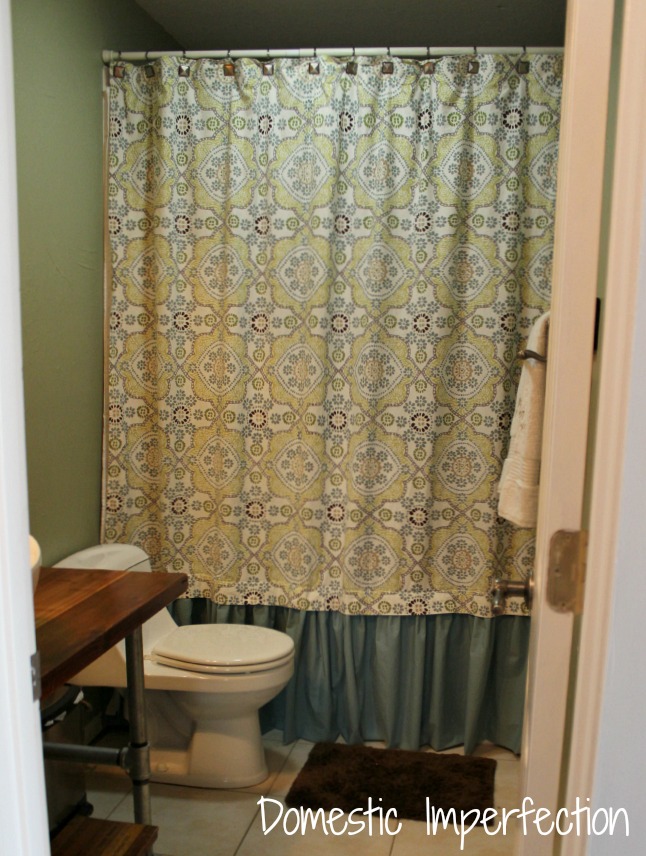 Except I didn’t like it all that much, so I added two lengths of brown ribbon along the seam and it looked much better. 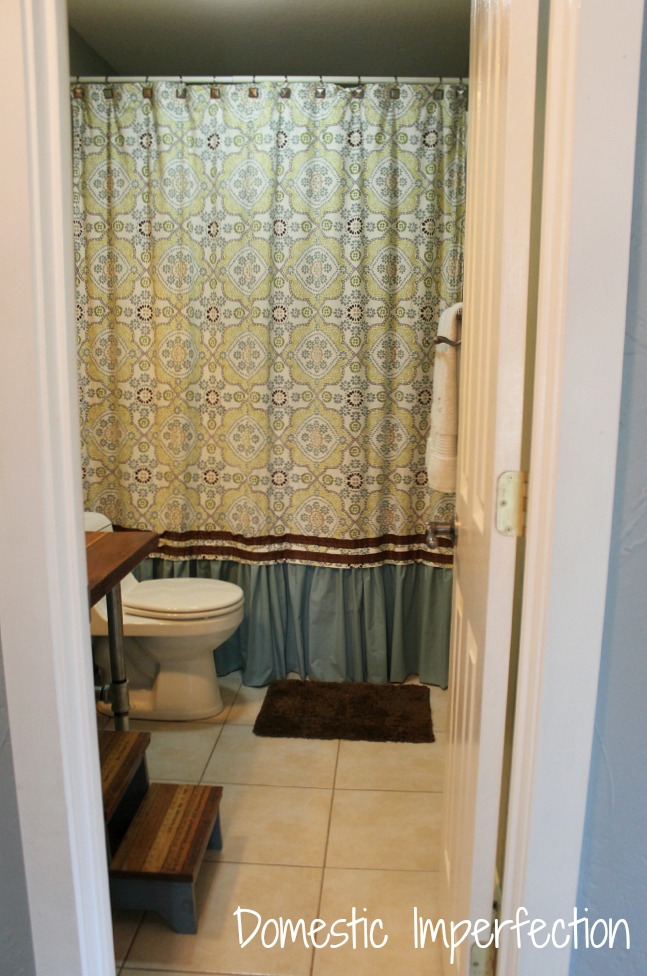 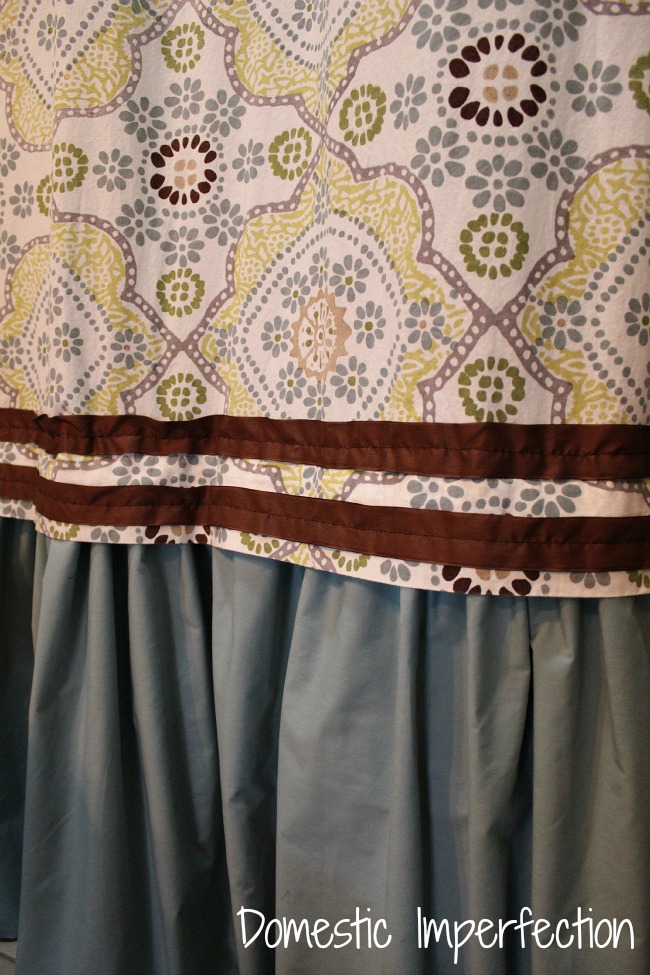 Raising my curtain rod made my liner too short as well and I didn’t want to buy another longer one, so I ripped up some fabric, tied it on a loop, and made it long enough to cover the tub. It’s ghetto for sure, but no one can see it. Unless of course you’re taking a shower, but in that case I hopefully know me well enough to not be surprised by this. 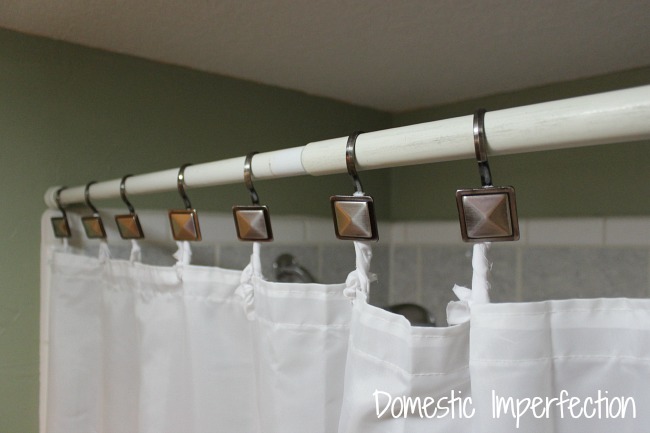 While I’m snapping pictures of my bathroom I just had to take the time to tell you about a little something that you MUST buy if you have little kids. Yes it’s a toilet lid and seat, and it is amazing. I love it about as much as you can love something that goes on a toilet. 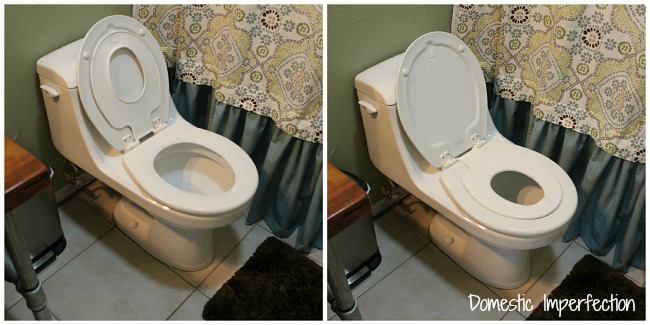 It’s the Bemis child/adult built in potty seat and it is perfect. It’s not really a seat at all, it’s just a regular toilet lid that has a built-in toddler seat that attaches to the top with a magnet. We’ve had the separate seat and it was disgusting to clean out, and the ones that sit on the toilet end up getting carried around the house. Anyway, I know that’s random in a shower curtain post, but I had to share in case I can save someone else the trouble of buying three different kid potties.