I feel like this is something a lot of people struggle with…if you have a fireplace, where do you put the TV? The same wall? A different wall? If they are on different walls, which way do you point your furniture? The TV is the obvious answer, but no one wants to turn their back on the fireplace either. Our current house doesn’t have a fireplace so been a non-issue until now, and fortunately the decision was easy when it came to the new house, simply because there is only one wall in the living room and everything had to go on it.

Here is a cross-section of the house showing the fireplace/TV/only wall in the living room. 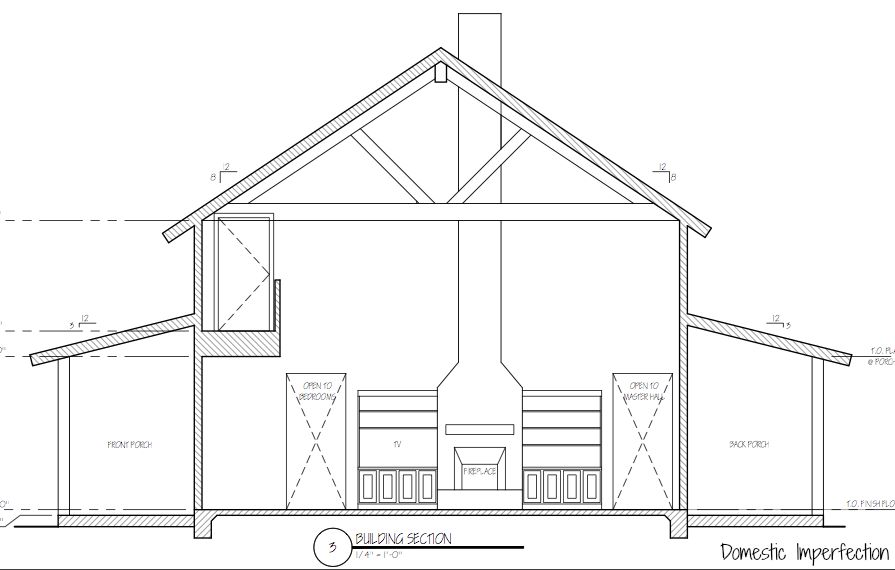 The fireplace is centered in the living room, and on each side of the fireplace we planned a built-in, one of which holds the TV. Everything fit, it was going to look great, perfect solution.

Then Adam found a great deal on a fireplace inset through a friend. A huge, 50 inch wood burning fireplace insert with a gas starter (this one, specifically).

So we told the builder the dimensions and he had the framers frame it up to the new size, which was significantly larger than what was in the plans. 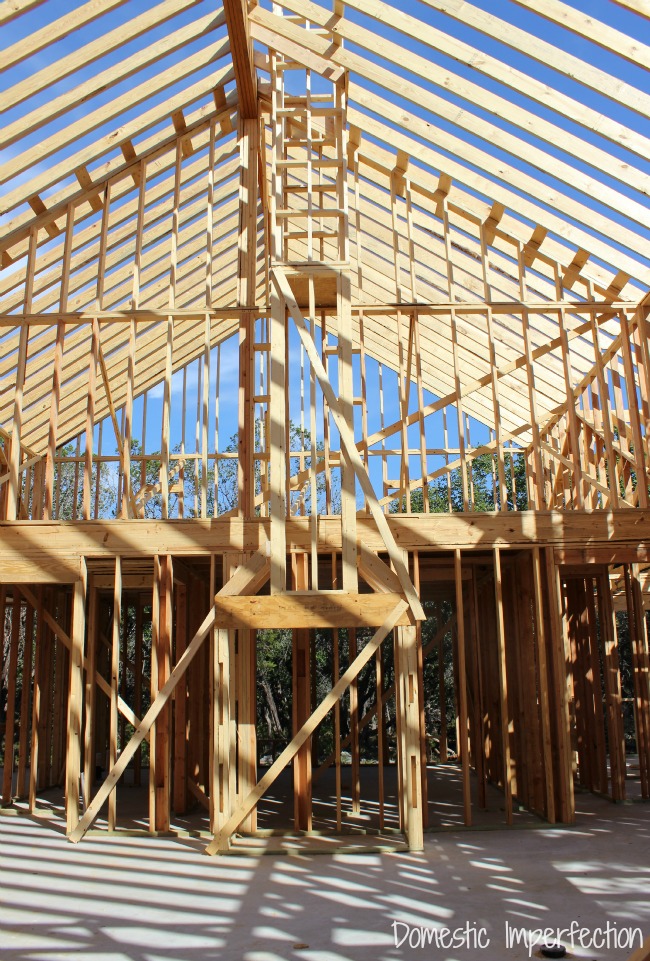 One day Adam and I were checking the house progress, measuring everything to make sure it was correct, when we noticed that the built-ins were going to end up being pretty narrow. That’s fine in and of itself, except that it didn’t leave much, if any, room for a TV. And even if we got a TV that would fit, the fireplace would be sticking out so far that it would be hard to see. Hmmm. Not good.

So I did the only thing I know to do in these situations…I got on Houzz.

1. Put the TV over the fireplace

3. Put the TV in a completely different room

Putting the TV in another room was something Adam was okay with (media room attic, anyone?) but I was against. I don’t want everyone hiding up in the attic, I want everyone with me while I’m working in the kitchen. I’m selfish like that. The TV must go in the living room.

So that left the swing arm option. So swing arm it was.

Then a few days later it hit me… swing arm was not the best solution, the best solution was actually secret option number four…move the fireplace. If we moved it to the right or left we could basically combine the two small built-ins into one large one and have plenty of room for both the fireplace and the TV.

BUT…then the fireplace, the focal point of our entire house, would be horribly off-center. So I did the only thing I know to do in these situations…I got on Houzz. Houzz would tell me if I was ruining my new home or not.

Traditional Living Room by Clearwater Home Builders J. S. Perry & Co., Inc.
.
The consensus? I think we can make it work and not look weird, and functionally it makes perfect sense. Luckily Adam agreed and the next day the fireplace moved about four feet to the right. 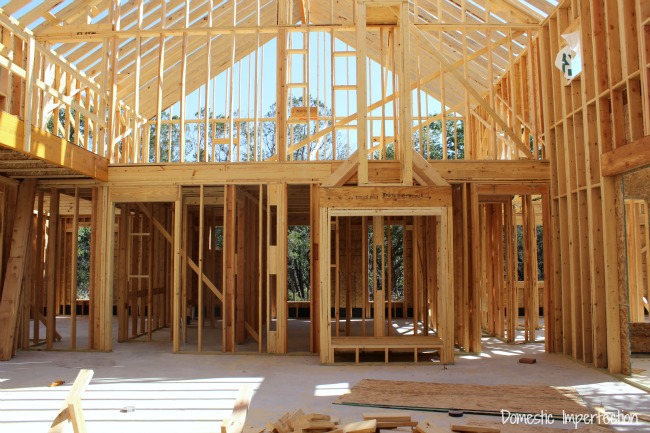 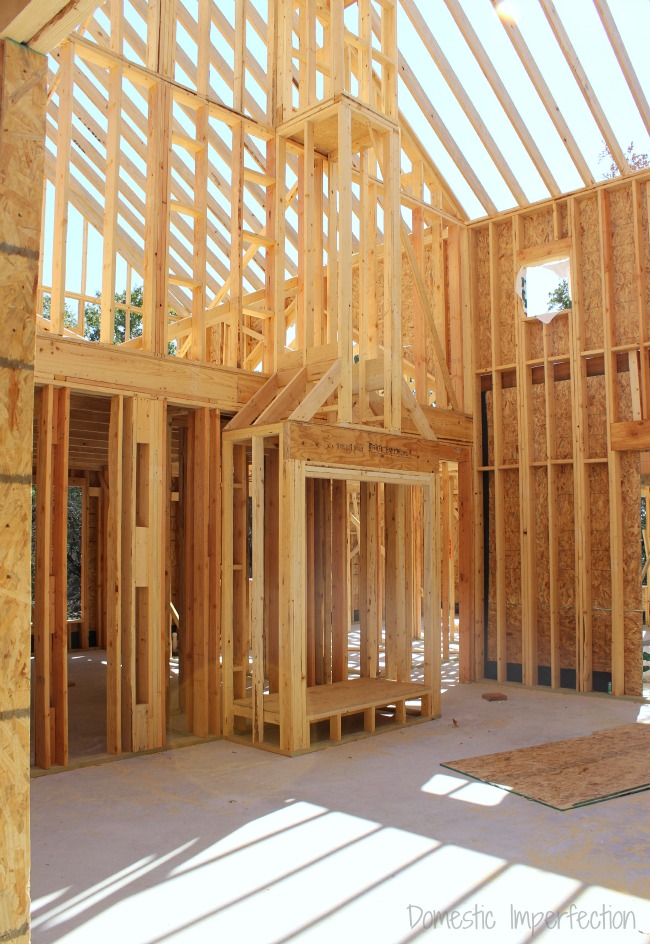 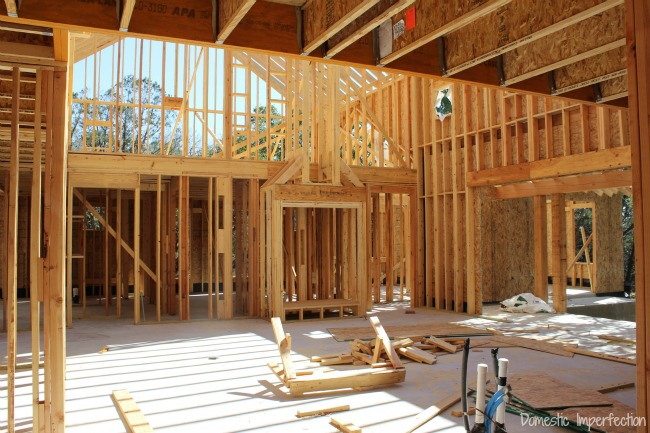 And so, it’s done. There’s no turning back now. I really think it will look fine, especially considering that neither Adam or I are the kind of people that need things to be symmetrical. I know lots of people do though, and just in the few people we polled about moving the fireplace about half said it would drive them absolutely crazy.

Midcentury Living Room by Kansas City Design-Build Firms Hufft Projects
(Does that above photo make you twitch or are you totally okay with it?)
.
As for plans for the actual fireplace, it will be a lighter limestone with a thick German smear mortar, same as the outside of the house, similar to this…

Rustic Exterior by Southlake Home Builders Calais Custom Homes
.
We are also considering doing a solid limestone slab as the top of the hearth, with wood storage below.

Traditional Porch by Wayzata General Contractors Stonewood, LLC
.
I’m still unsure about that one, I can’t decide if I like it because I like it, or if I like it because it’s unique you never see it.
.
As for the wall behind the fireplace, it’s just too big and tall to be left as boring old drywall…it needs some texture. I’m pretty sure we are going to have the builder plank the whole thing. I’d like to wrap the planking around the built-in for the TV and add rustic wood shelves. Here is the best example I can find..

Transitional Living Room by Atlanta Architects & Building Designers Clark & Zook Architects, LLC
.
I was really hoping to get y’alls opinion on moving the fireplace before we did it, but the decision had to be made and executed really quickly, so I didn’t have time. I’m still interested though…how do you work out the TV/fireplace situation? Anyone have a similar layout to what we will?
« Windows
Walls and Stuff »