Last October I did something crazy….I painted my shower. The post I wrote about the process has become one of my most popular, probably because (much like my paper bag flooring) it’s just an unusual concept. Anyway, since it’s been over a year I figured its high time for an update. After all, whats the point of posting crazy tutorials if I’m not going to let you know if they are a total waste of time or not? 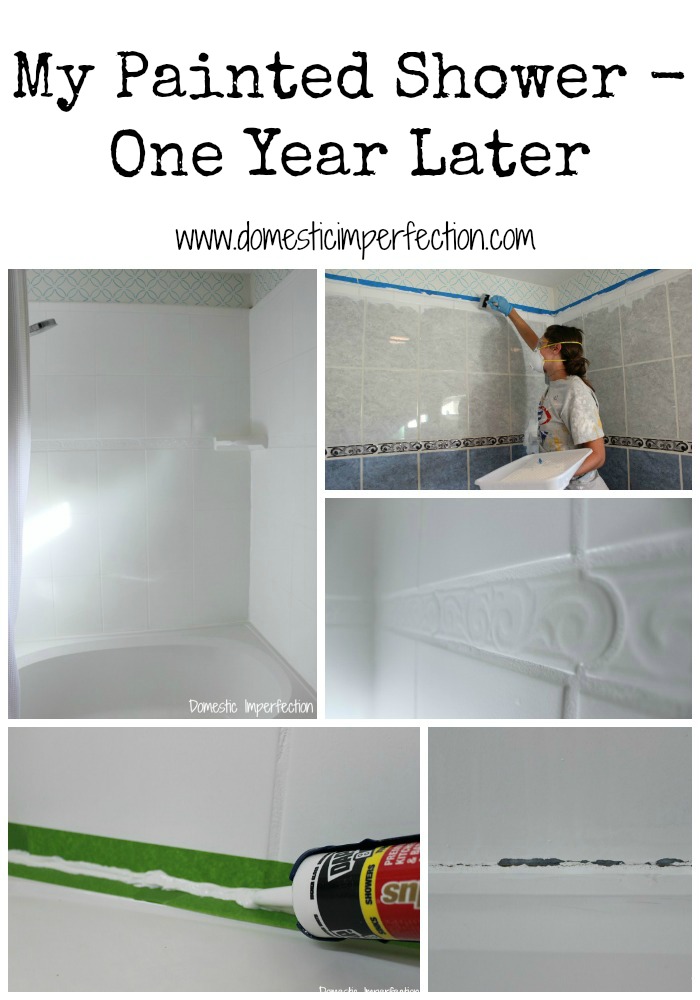 I have good news…it wasn’t a total waste of time.

Here is the original before and after pictures… 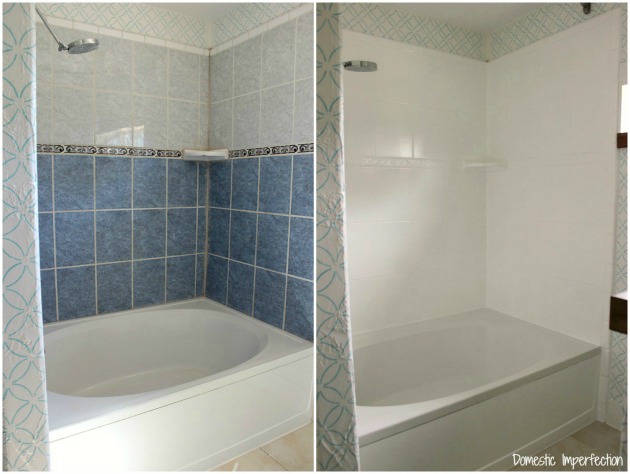 and here it is as of this morning. 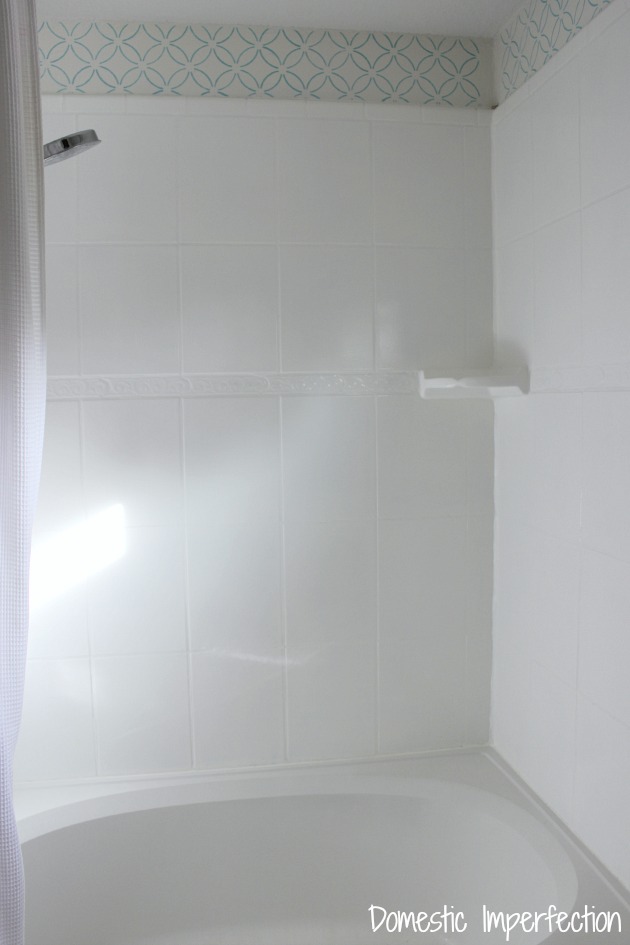 Overall, it looks great and I am really happy with it. I only painted the walls and not the tub (this is the product I used), but you can absolutely paint the tub as well (and I still might). My family isn’t easy on this shower, it is the only one in the house that we use and we use it multiple times a day. As far as cleaning it, we haven’t done anything special. Adam is actually the shower scrubber in our house, he uses cleaner and one of those handheld bristle brushes (the same one he uses to clean our car tires) to scrub it.  (Well, not the same brush, but the same kind of brush. Gross y’all.) I’m not saying I recommend this method, I’m just saying that’s what we do around here and it hasn’t backfired as of yet. 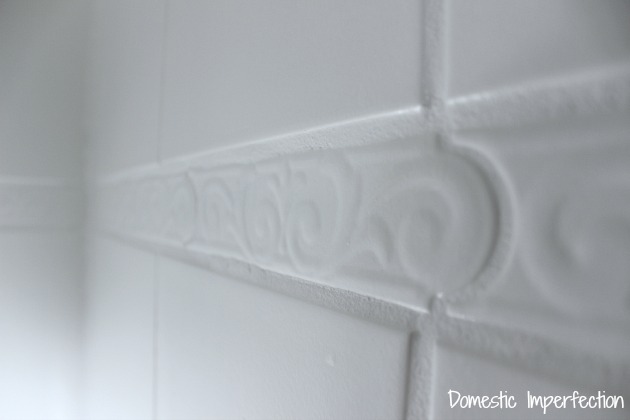 That being said, I DID have had to do a little damage control about six months ago. 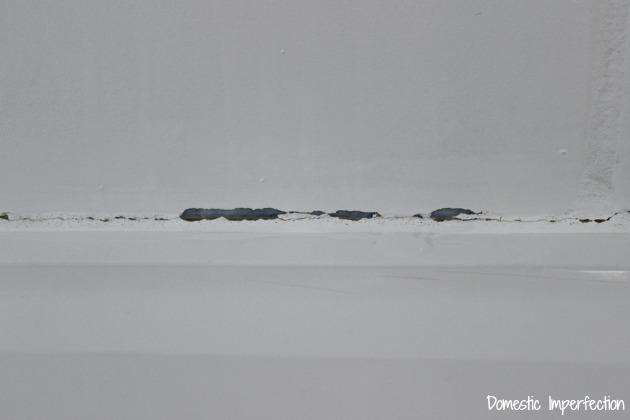 When I first did this project my husband wanted to fix some of the broken and cracked grout before we painted. He fixed it all up, and also gave the cracked grout between the tub and the tiles a fresh layer. The problem is that you should never put grout where the tub and the tiles meet, you always caulk instead. The reason being is the tub moves ever so slightly (like when you fill it with water) and this will cause grout to crack, where caulk is flexible. The builders of our house had put grout there and it had cracked, so Adam fixed it without really thinking that the grout shouldn’t be there in the first place. ANYWAY, the grout cracked again, which caused some water to get in under the paint in that area and flake off.  It looks really terrible in that above picture, but when you step back you can see that it’s not that bad (especially considering I left it like this for MONTHS before fixing it). 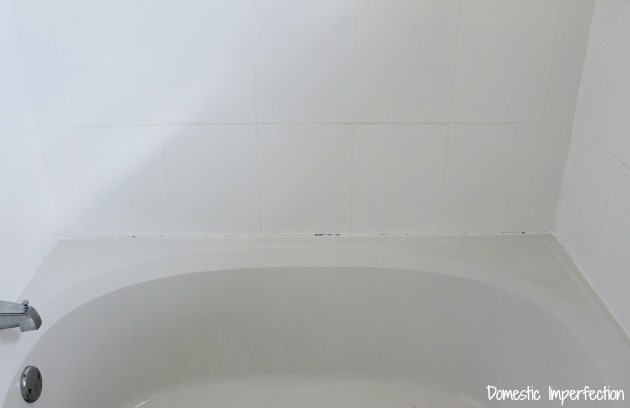 To fix it I simply taped around the corner, caulked (with caulk made specifically for showers), and smoothed out with a baby wipe before removing the tape. 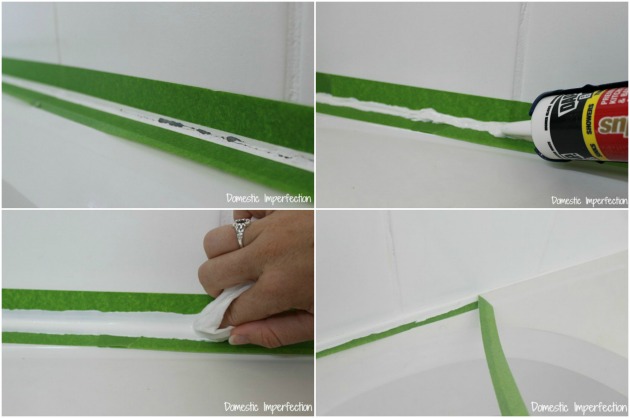 It was an easy fix and that area has had zero issues since. Update – we sold this house in August of 2016 (three years after painting the shower), and the paint still looked brand new, no chips or cracks. It may have been slightly less shiny, but not much.

Overall I’m really impressed with the whole process and would do it again. I think it’s a great (and cheap!) way to cover up outdated tile that is driving you crazy. However, I still wouldn’t consider this a permanent solution. It is holding up well, but at some point it HAS to start looking bad and flaking, right? Even if it’s five to ten years down the road, it seems inevitable. I would say this is the perfect solution if you are planning to remodel (aka replace tile) at some point in the future but want the ugly outdated tiles gone ASAP.

Has anyone else painted their tiles or tub? I know some of you said you were going to try it after my ORIGINAL TUTORIAL, I would love to hear how it is holding up!

Update – I just saw that Rustoleum now makes a touch-up kit for this product! Now if I do get some chipping I can easily fix it without buying and mixing up a quart of paint.

I also noticed that they sell a spray paint version of this product, and also one for appliances. I’ve never tried either of these, but they have great reviews.

Other posts you may enjoy –