Don’t you hate it when you come up with an idea completely organically then later find out it’s been done a thousand times? I came up with the idea for an advent calendar made out of a muffin tin and was really excited about it. I thought “Sweet, finally something where I wasn’t inspired by anything I saw online! I’m so original…I’m going to be a Pinterest sensation!” Then I went onto Pinterest to double-check my originality and saw that muffin tin advent calendars are pretty popular. Dang. But I decided to make one anyway, because 1) I wanted one and 2) if I had never seen one then chances are many of y’all haven’t either. 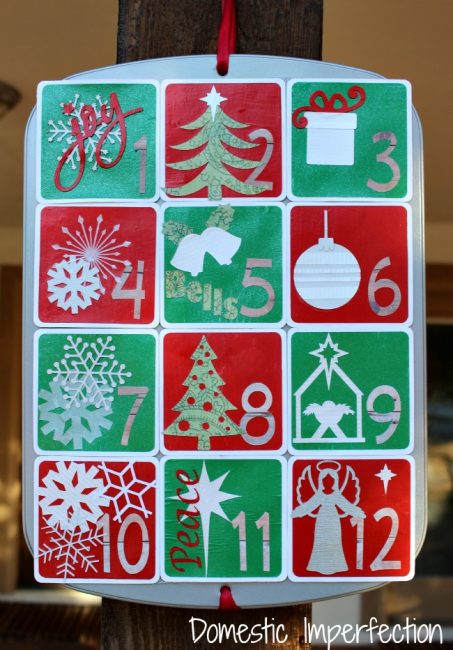 So the idea of a muffin tin advent calendar came to me one day last week when I was attempting to entertain Elijah with a jar of buttons and all our muffin tins (this works great by the way, as long as your kid is old enough not to put them in his mouth). 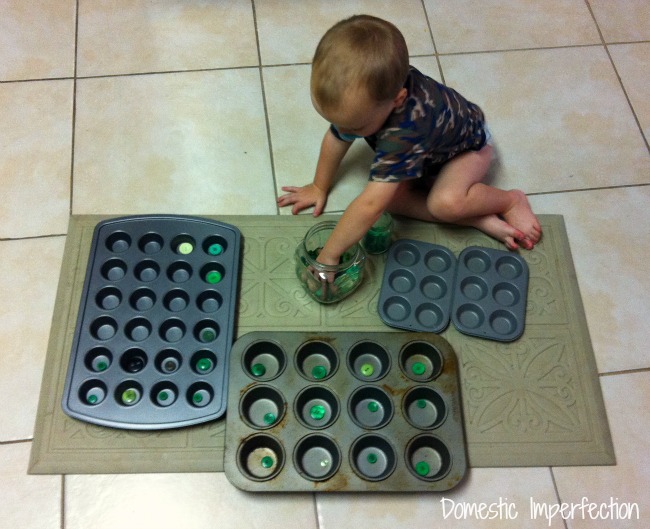 I was playing with him and putting one button in each hole and counting as I went. It turns out that mini muffin tins have 24 holes, and I thought “A-HA! That’s how many I need for an advent calendar!” Then I realized it was already December 4th and I had missed the advent boat. Then I looked over at the regular muffin tin and saw that that one has 12 holes…perfect for a twelve day procrastinators advent.

I made this just out of random paper and scraps I had lying around. I had some silver paper, red cardstock and some (way too thin) green wrapping paper. Oh, and a piece of paper that looked like wood and printer paper.

I can work with that.

So I did some measuring and made the whole thing with my Silhouette CAMEO, magnets, and Mod Podge. 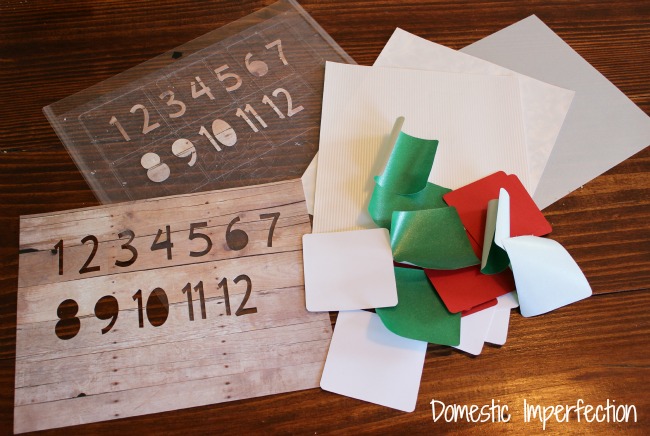 There’s really not much to explain here, you just cut out squares (or circles) that are slightly larger than the muffin opening and Modge Podge whatever you want to the front. Just double-check your measurements before you get too far…I started to cut out my shapes assuming that I correctly remembered the measurements of my squares. Turns out I assumed wrong….you know what they say about assumptions, right? 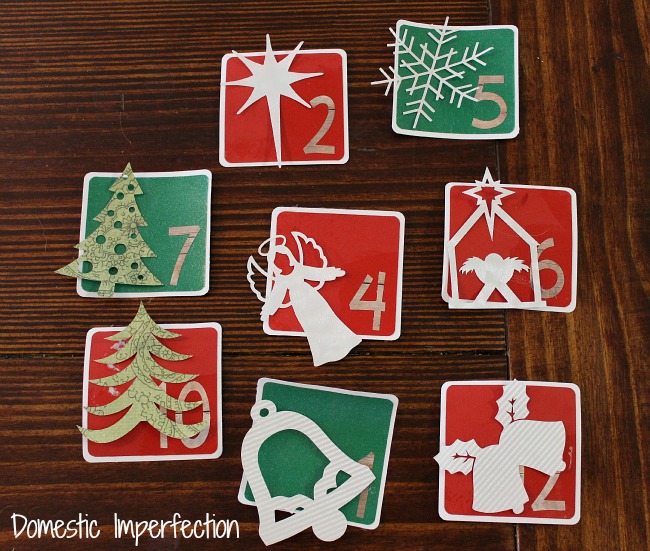 To hold the cover over the tin I just used small adhesive magnets on each corner (I cut each pre-cut square into fourths).

You can fill the tins with whatever you want, I filled mine with scripture. I printed out the Christmas story from Luke, cut it down so that there were a few verses for each tin, and then rolled them up and dropped them in.

I think I’m going to add a piece of candy or something fun to each day as well. My kids are toddlers and aren’t all that interested in listening to bible verses…unless of course they are munching on a delicious Reeses peanut butter cup.

And here we have it. I wasn’t really sure I was going to like it while I was making it, but I think it turned out pretty well considering it’s made from scraps.

I kinda wish I would have thought ahead so that I didn’t end up with all the snowflakes on the left side, but it is what it is. You probably wouldn’t have even noticed if I didn’t just point it out. 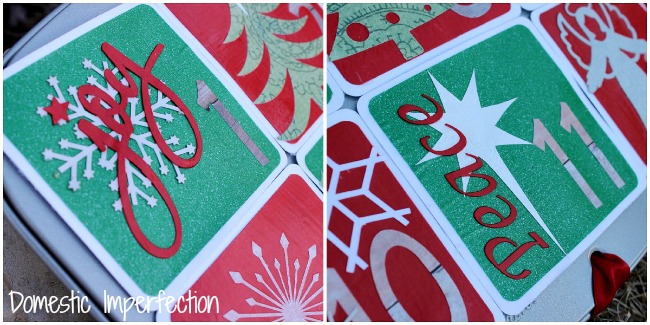 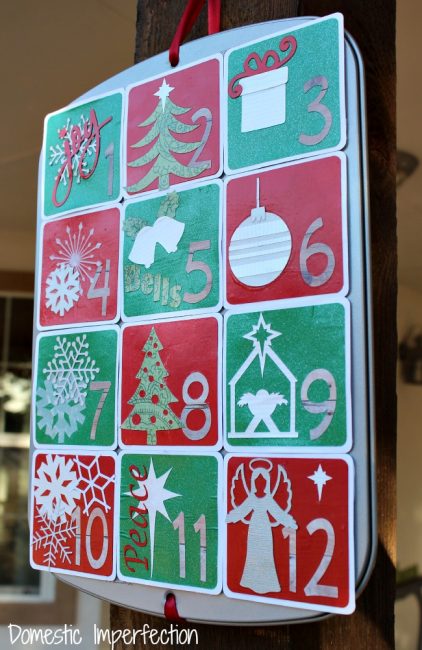 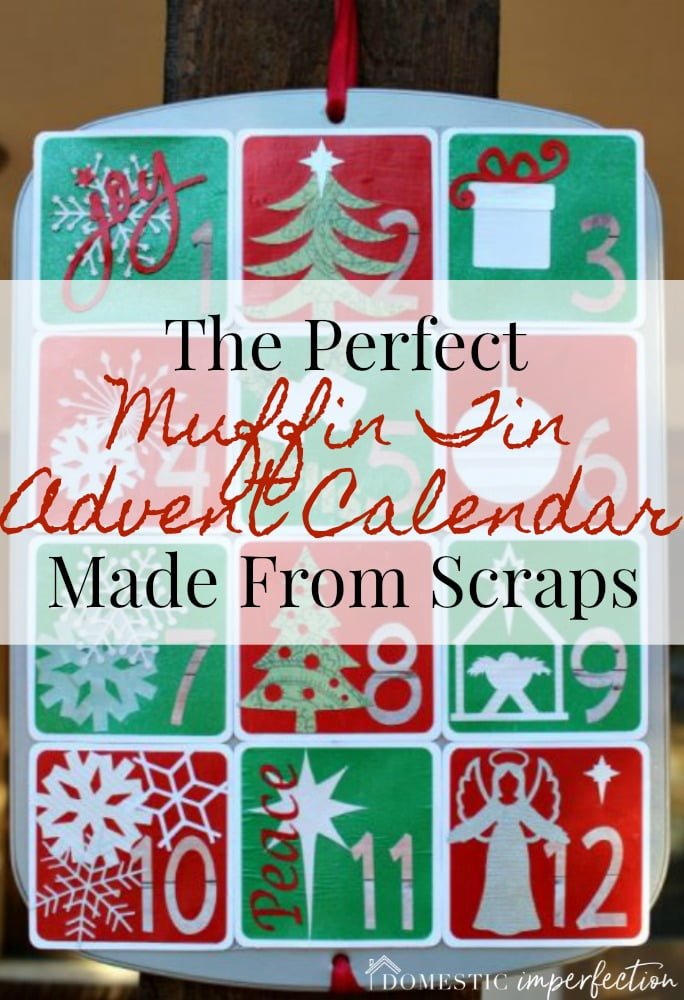