I figured that after a month of silence it was about time for an update on the baby and life in general, so here we go. Let’s start at the beginning…the day Abram was born. 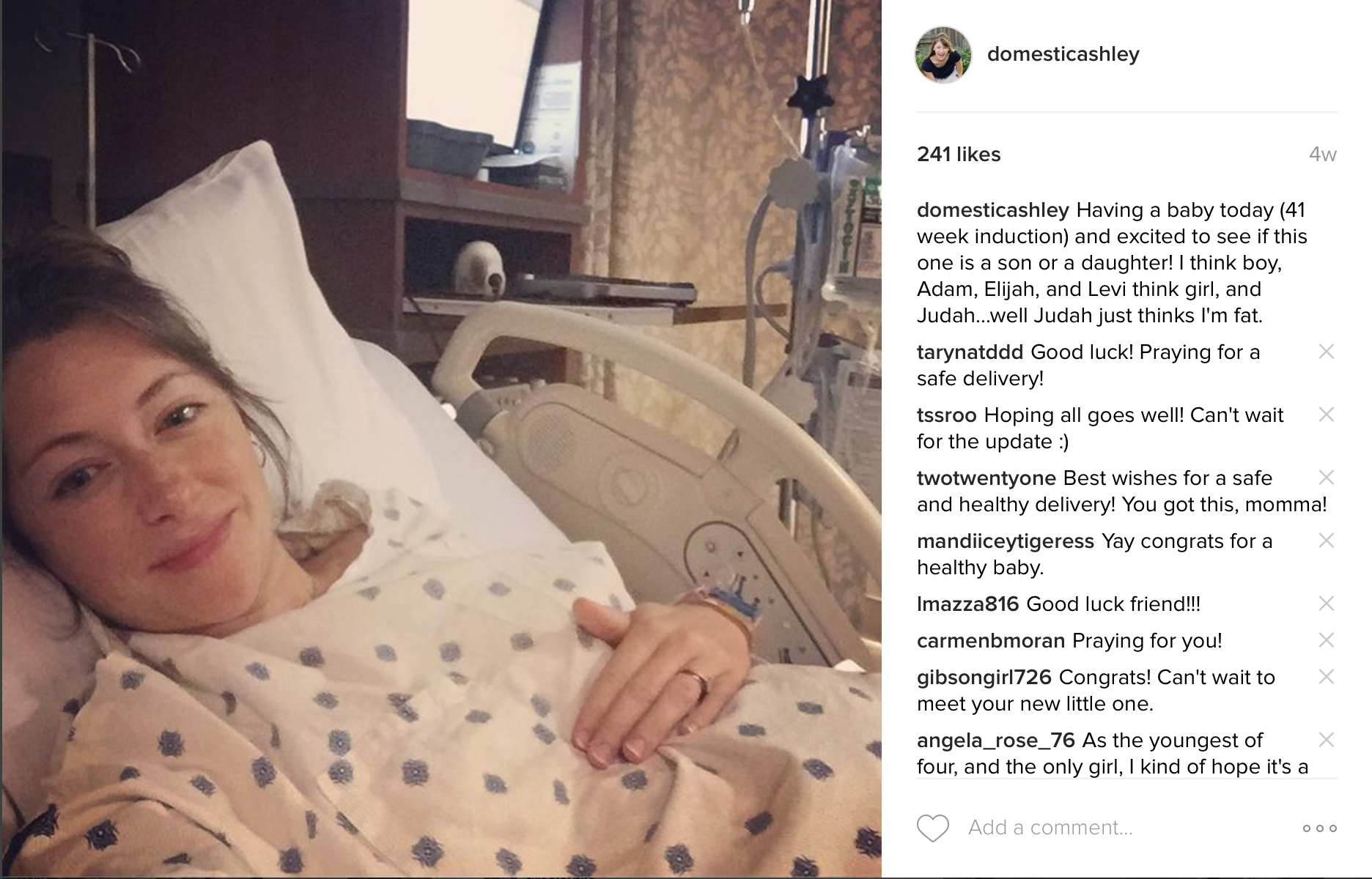 I’m one of those women that is chronically overdue with babies and I expected nothing less with this one… I don’t think I even packed my hospital bag until after my due date. Anyway, when 41 weeks (a week overdue) rolled around with no signs of labor, Adam and I decided to go ahead and induce. So one Wednesday, October 26 we went in for our induction at 5:30 am, and it went pretty much exactly like the induction we had with Judah 19 short months ago. The doctor broke my water, started pitocin, and when things started heating up I got an epidural. A couple of hours later, at 12:35, I had baby #4! 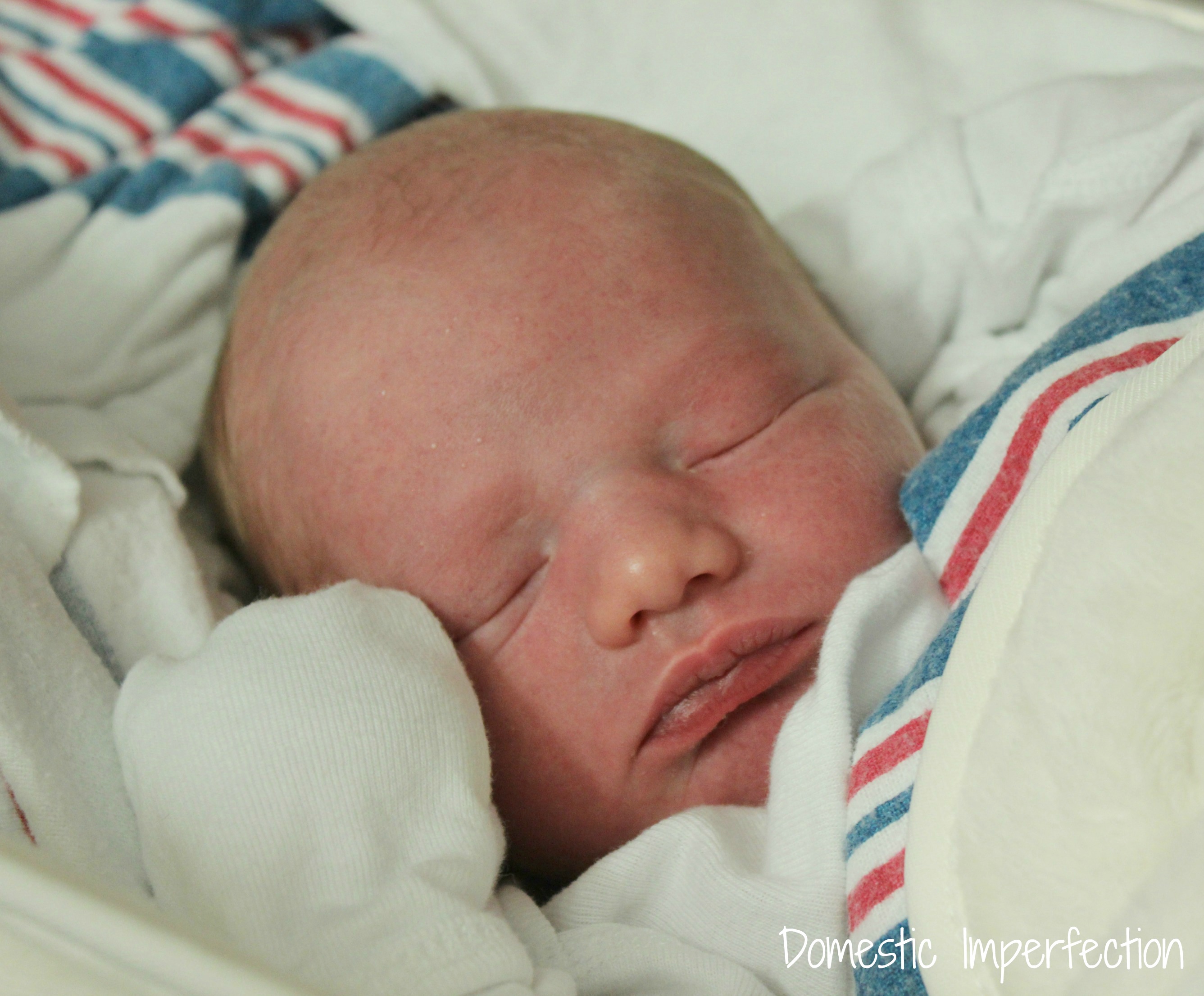 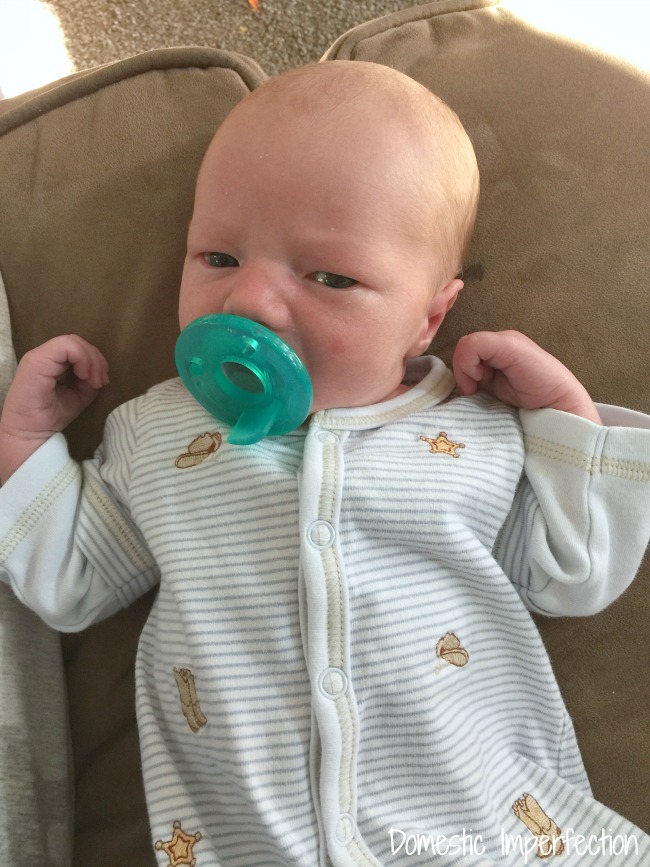 We’ve never found out the gender with any of our babies, and this one was no different. If you’ve ever wanted to feel intense pressure from everyone over something you can’t control, have three kids of the same gender with a surprise fourth on the way. So when that pushing moment finally came and we hear “It’s a boy!” Adam and I both just started laughing…because of course it’s a boy. I thought it was a boy all along, I’ve thought I was having a boy each and every pregnancy. Someone upstairs thinks Adam and I are good at raising boys, evidently. 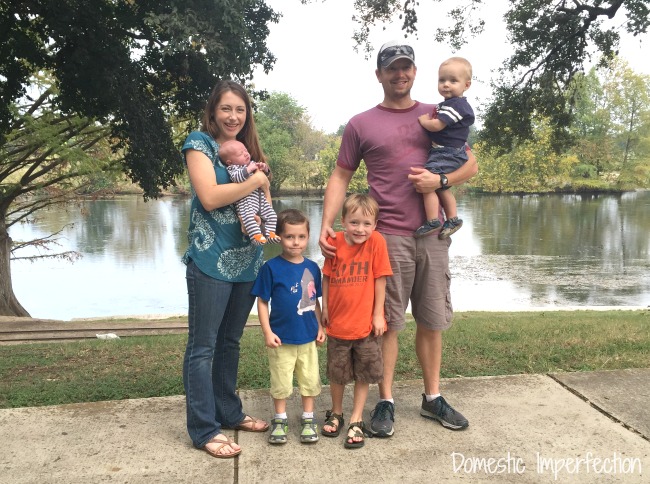 Ten days into being a family of six

So how is life with four young boys? Well Abram is a month old now, and let me tell you….it is absolutely insane. INSANE. Four is a lot of kids. I feel like Adam and I had a pretty good handle on three, but this is a whole different ball game. Allow me to quote comedian Jim Gaffigan here…”Do you want to know what it’s like to have four kids? Imagine you are drowning…and then someone hands you a baby.” Ha…so true.

We’ve had a lot of medical stuff happen in the last few weeks as well. First, when Abram was a week old he had a very scary episode where he seized up and stopped breathing. I’m not sure how long it lasted because it felt like a lifetime, but it was long enough to start turning blue and scare the bejesus out of me and a friend that was visiting. Adam and I took him to the ER to get checked out and they said everything looked good and reassured us a bit, and he has been fine since. That doesn’t meant that I don’t sit and watch him breathe at night and jump every time he makes a weird noise, but so far so good. 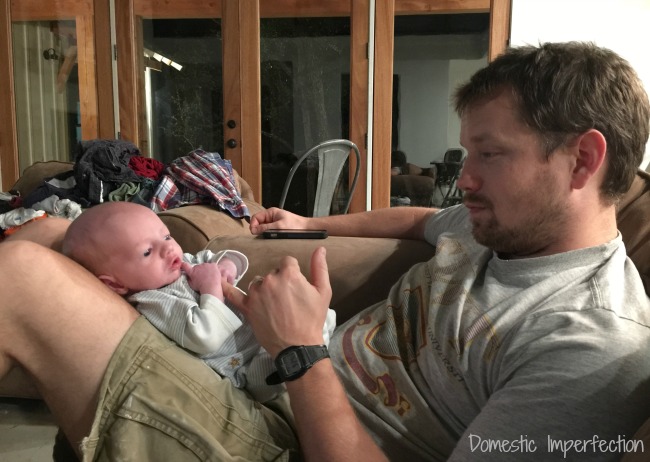 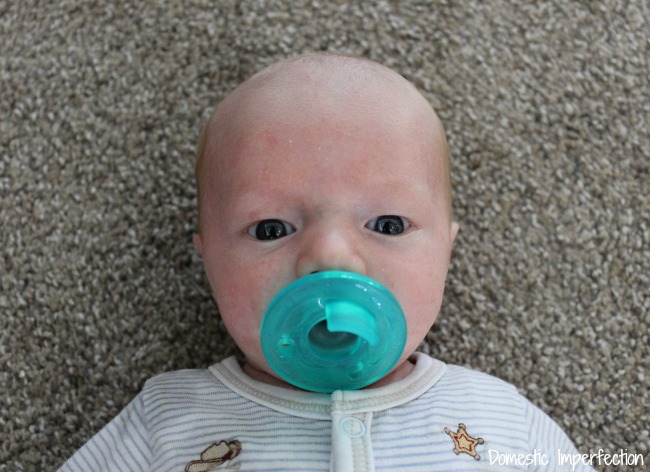 Then a few days after that Judah (the toddler) fell off the back porch, hit his head on a rock, and had to get five stitches. We had the stitches taken out a little over a week later and the would didn’t heal all that well, so he is going to get a grizzly scar as a memento. Luckily it’s in his hairline and probably won’t be noticeable. He was a champ when it happened though and it hasn’t slowed him down at all….I have a feeling he is going to be my stitches/broken bone/lots of urgent care visits kid. There’s one in every family.

Judah a few days before his injury. I wish I loved anything as much as Judah loves cake.

That same day that Judah fell, Elijah (the oldest) got sick. He was sickish for a few days and then started looking pretty bad, so we took him to the doctor and came back with a pneumonia diagnosis. Then the day after that Judah came down with croup, which if you’ve ever had a kid with croup you know how it sounds…like a seal bark cough and labored Darth Vader breathing. It sounds terrifying, but it only lasted a day or two and he was back to his normal self. Unfortunately me, Levi, and Adam got sick shortly after, wrapping up a super fun two weeks of illness and injury. We are all better now though, and I’m pretty sure we met our sickness quota for the season, so that’s good.

I think the hardest thing about having four kids so far (besides all the medical chaos) is the age gap. The transition from two to three was fairly seamless, and I think the major factor there was that there is 3.5 years between number 2 and 3. That age gap is crazy easy compared to the 19 month age gap between 3 and 4 (there is also 19 months between 1 and 2). Do you like how I just call my kids by their number now? It’s because there’s so dang many of them, haha. Here is the kicker though…these past few insane weeks? Adam has been home for all of them. He took a month off of work and I am so SO happy that he did. I wish he could take a year off. Or forever. We’ve been tag teaming parenting and it has been great. He went back to work a few days ago I’m not quite sure how I’m going to handle all four of them on my own, not to mention school drop offs and pickups, homework, and all that jazz. And why does school start so dang early? Elijah has to be at the bus stop at 6:30 am… which comes mighty early after a long night of not sleeping. We’ll figure it out and things will get easier, but goodbye sleep…it’s been fun. I feel like I may never cross anything off my to-do list ever again, besides “dishes”, “laundry”, and “keep everyone alive”.  Although I am writing this blog post, but that’s only because  my mom is over here playing with the kids. Thank goodness for moms. 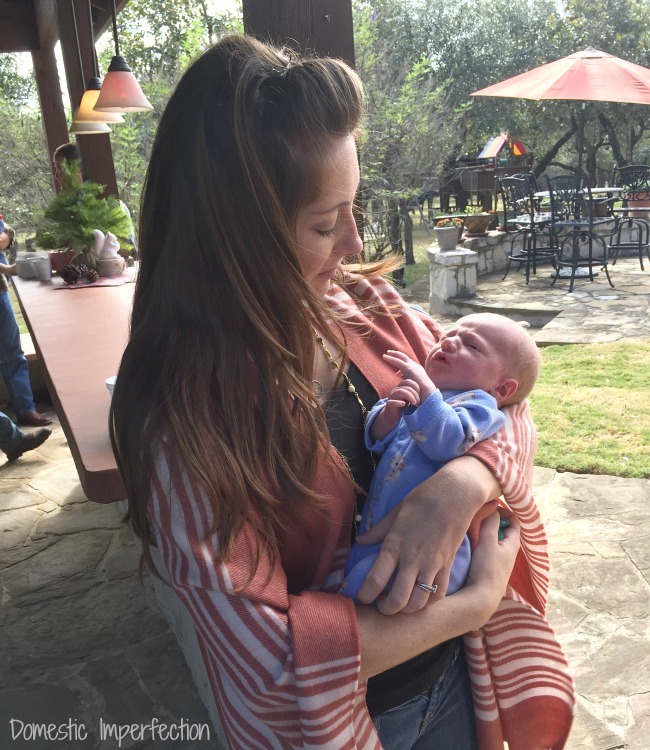 At a baby shower for my newest nephew, due in February.

Speaking of to-do lists, Adam has been a man on a mission during this last few weeks. He took a month off for the baby and to help me…but his real goal was to get stuff done around the house. In the last few weeks he has built this banquette in the dining room (now I have to paint and upholster it)… 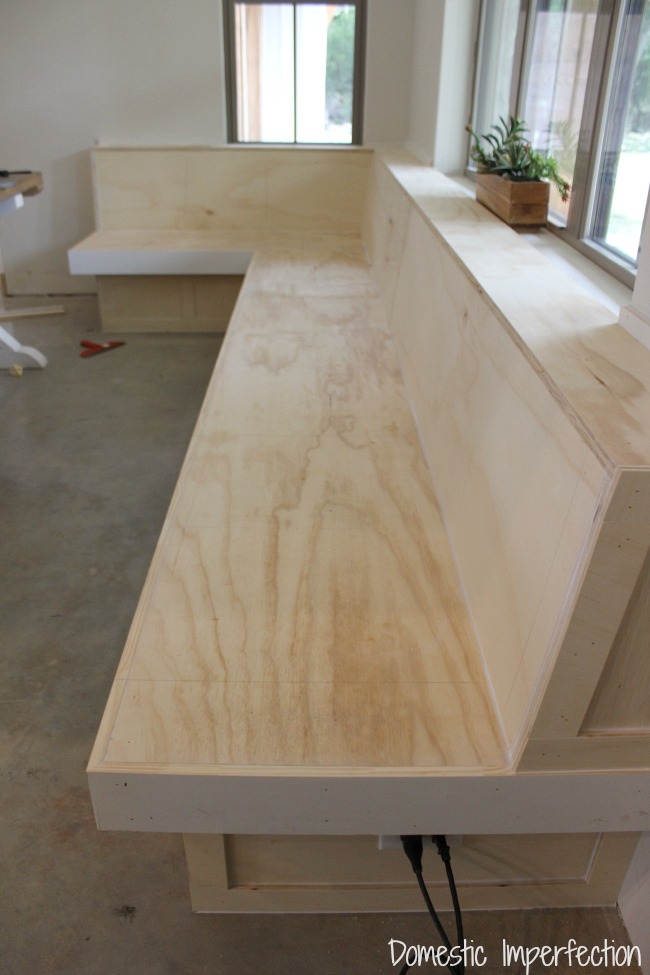 Framed out our chicken coop… 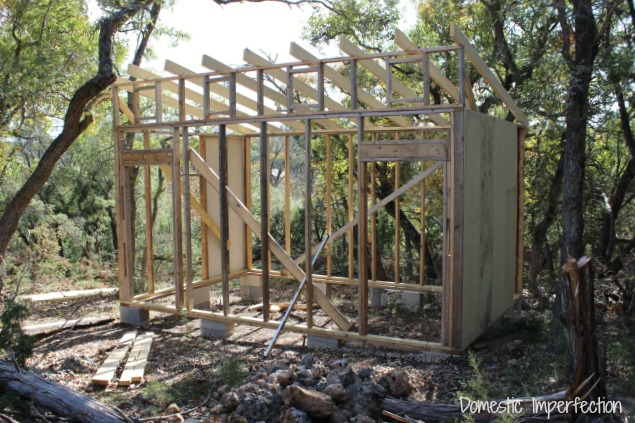 built these shelves in the kitchen (which I blogged about already)…

Helped the landscapers built this retaining wall in the backyard..

Worked on the cabinet doors for the kitchen… 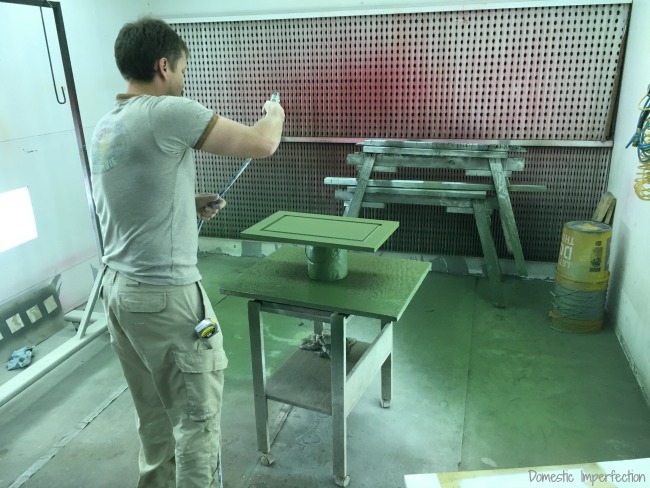 And various other things like fixing my van, hanging light fixtures and fans, clearing and burning cedar, etc. The craziest part is that when his time off came to an end he was like “I feel like I got nothing done”, and I was like “Something is wrong with you.” Although, I do sort of get it because we didn’t actually finish any projects and get to cross them off the list…but still, he is crazy (and a very hard worker that I am extremely grateful for).

Anyway, I think that about covers the last month of life. I’m trying my best to snuggle and enjoy little newborn Abram as much as possible, after three other babies I’m very aware of how sweet and short these days are. Knowing that this is my last baby has only made these days feel so much shorter, and I honestly get a little weepy knowing that all of this babies firsts will be my last firsts. This morning Abram smiled at me for the first time (on purpose) and it was adorable and amazing and made me want 100 more babies. But knowing my family is complete is a great feeling as well. Adam and I have now met all our family members, and in a few years we will be out of the newborn fog and be able to take our boys on adventures that they will both appreciate and remember. And this weekend I gave away my bin of maternity clothes and wasn’t the least bit sad to see it go. I anticipate that giving away all the newborn size clothing might be a little harder though…last babies are weird mix of emotions.

All four of my babies at one month. My second born, Levi, sticks out as the only child to take after my side of the family.

I’ll leave you with this awkward, adorable picture of all four of my boys…Elijah, Levi, Judah, and Abram. With the exception of me (and my overly popular 80’s cheerleader name) you could switch us out with an Amish family and no one would be the wiser. Old Testament boy names are the best. 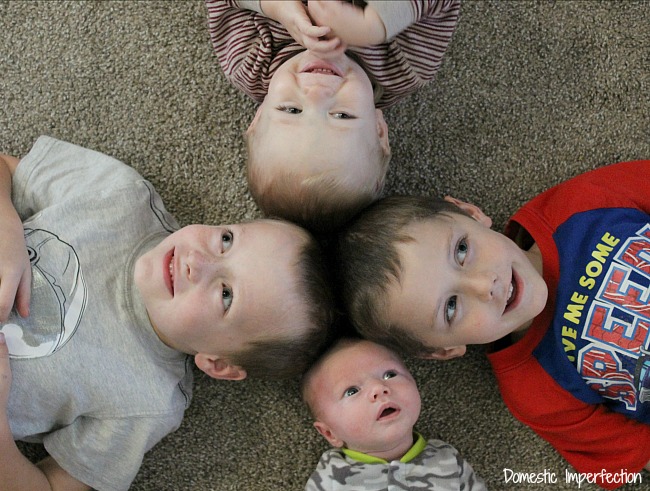