I haven’t carved pumpkins in a really long time. Why? Well, because this is how pumpkin carving seems to go…

First you cut open the pumpkin and clean out all the guts. Lets face it…no one really likes this task. It’s kinda nasty. Then you carve it up, put it out on your front porch, throw a candle in, and enjoy knowing it’s out there for a few nights. Halloween passes and since the pumpkin has been sitting on your porch for a while you don’t really notice it anymore. Thanksgiving comes and goes and you pull out the Christmas decorations. As you’re stringing lights on your house the breeze blows and you catch a whiff of that collapsed pile of pumpkin you forgot about long ago. At that point you pretty much have to scoop it off your porch with a shovel, all the time wondering what the neighbors and UPS man think of you and your giant liquefied squash.

Nonetheless, I figured my kids would get a kick out of carving pumpkins. So here they are, my two excited helpers. 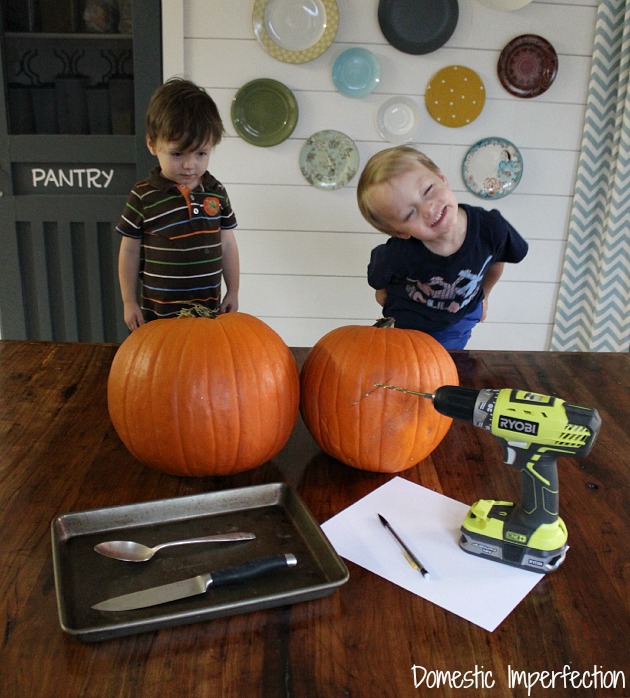 Or rather, one REALLY excited helper and one that is only there because I told him I would give him a marshmallow to stand behind a pumpkin.

First, cut out your pumpkin lid and scoop out the guts. Standard pumpkin procedure.

Basically the whole point of us doing pumpkins this year was to watch (and photograph) my kids faces as they reached in a scooped out pumpkin guts. Much to my surprise and disappointment they refused…flat out refused. Not even marshmallow bribery worked, which is new to me. Such party poopers. So instead of showing y’all an adorable picture of my kids looking disgusted, here is one of me and my brother circa 1996. My opinion on pumpkin guts is long-standing.

So, first real step…choose a design. I choose maple leaves and drew them out on a piece of paper. Then I taped it to the pumpkin to use as a template. You could draw directly on the pumpkin too, or just free hand (free drill) it. 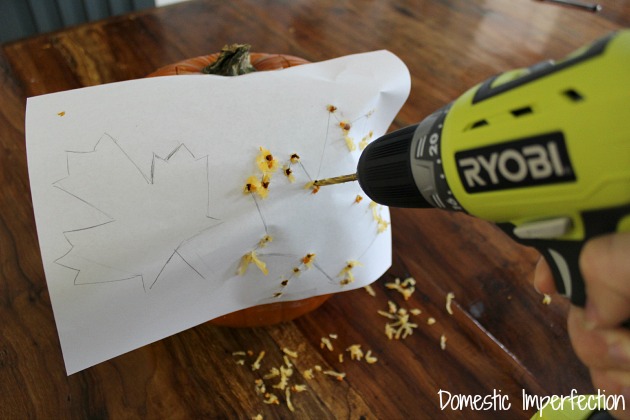 For the second pumpkin, I decided to forgo a plan and just go at it (the kids had lost interest at this point). 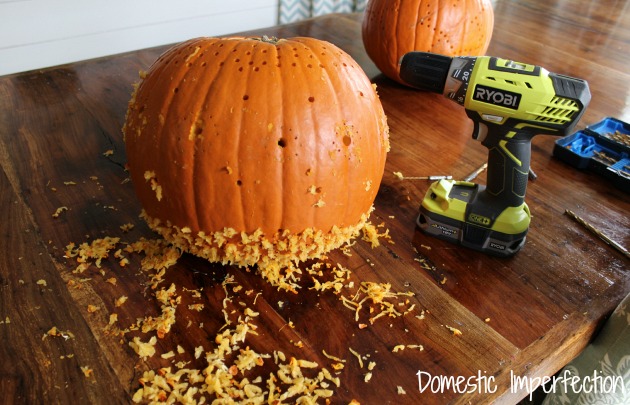 Then I cleaned up my sizable pumpkin mess and threw in a candle. However, the candle wasn’t staying lit in my pumpkin (not enough holes for oxygen I guess) so I used the top of a solar light instead. 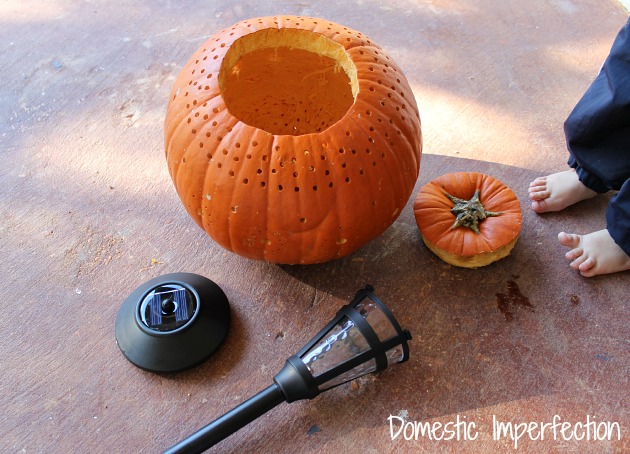 The solar light works great, and I much prefer it over the candle, honestly. You just have to remember to take it out every now and then to let it charge.

Now comes the part where I have to admit something to you. Here it goes….I have no earthly  idea how to take pictures of a pumpkin at night. None whatsoever. I don’t even own a tripod, so pictures without great lighting don’t stand a chance around here. Keeping that in mind, here is the final product. 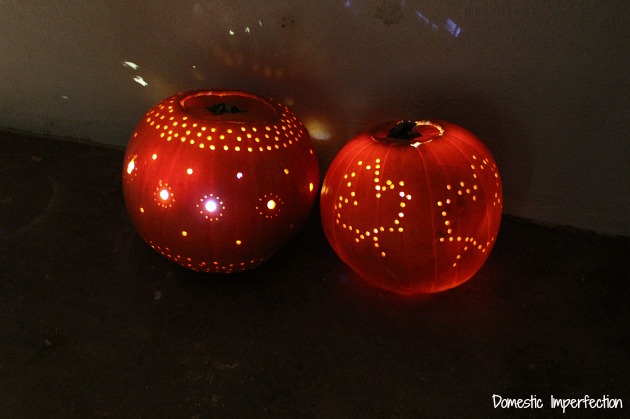 That leaf pumpkin somehow ended up looking like a giant ball of glowing pumpkin mold in all my pictures. I swear it’s a fresh pumpkin. Anyway, there you have it…pumpkins with a drill. The good news is that my kids think they’re pretty much the best thing ever, and my porch feels  festive for the first time in many years. 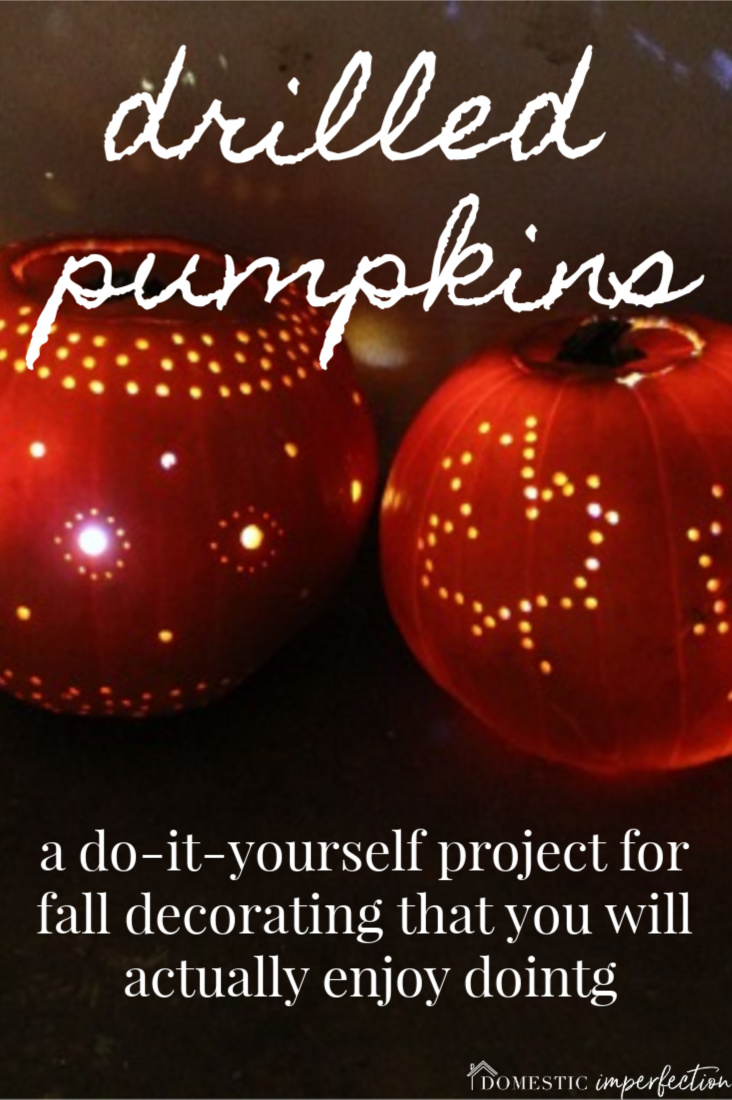