So what is it? It’s a huge button monogram for my unborn niece… 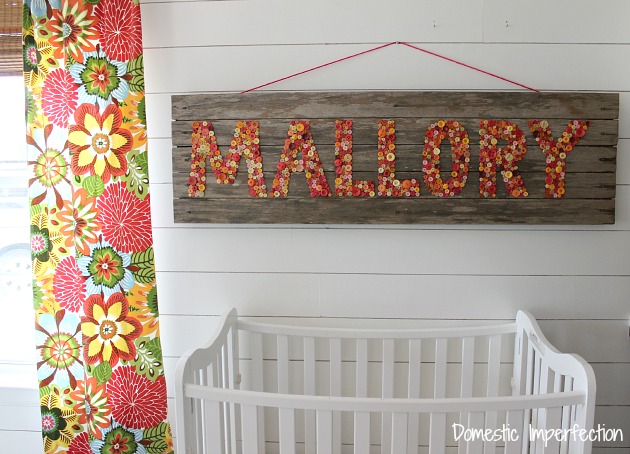 Well, she was unborn when I made it…now she is very much born and almost walking. Even though I made the sign over a year ago I can remember every detail of this project….which is really saying something since I often call my kids by the wrong name.

So lets set the scene –

It was the fall 2012 and my sister-in-law was great with child…the first child in our family that wasn’t birthed by me. Hallelujah! I was helping plan her baby shower and still needed a gift. At first I thought “I’ll just buy her something cute”. Then I felt a little guilty about being gift-lazy and thought “I should really make her something unique”. Then my brain started to work and I got a little excited. Then I got really excited and thought “I should totally create something HUGE that will be the focal point of her nursery!”. I mulled over ideas for a few days in my head…I wanted to create something unique, colorful, and feminine…but not frou-frou girly overkill. I’ve never liked overly girly stuff, and even though this isn’t for my kid I stick to my guns. It’s all about principles, you know? It’s probably for the best that I have boys.

After going through quite a few ideas I decided on rustic wood + bright colorful buttons. The problem? You know when you’re looking for something specific you can never find it…and when you’re not looking for it you see it everywhere you go? Once I started looking for long planks of rustic wood they seemed to disappear from my area completely. Then one day I was over at my parents telling them how I couldn’t find any when my brother into presented me with this… 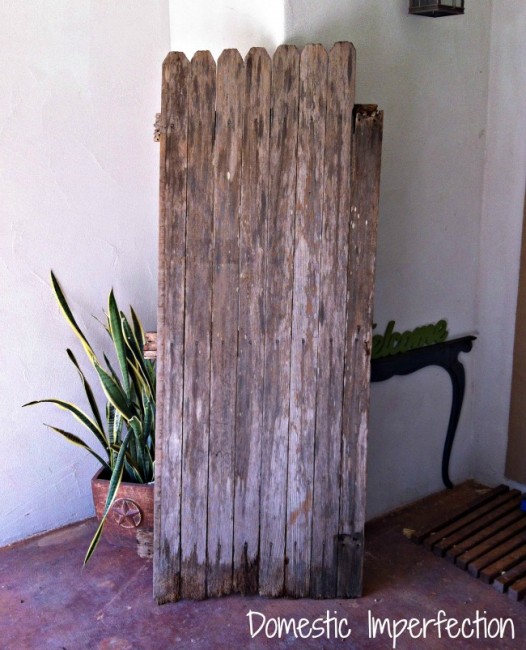 A super old and grizzled section of fencing. He had randomly brought home even though he had no use for it, figuring someone in our family could use it for something.  He was right!

So I brought it home, reinforced it, and cleaned up the edges, and got rid off all the creepy crawlies. 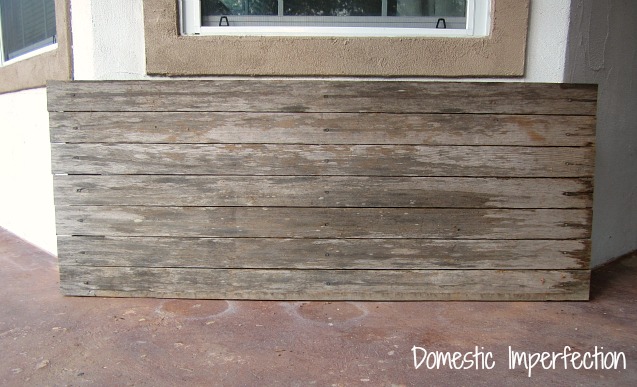 Next I drew out my nieces name-to-be on some butcher paper, cut out the letters, and traced them onto the wood. 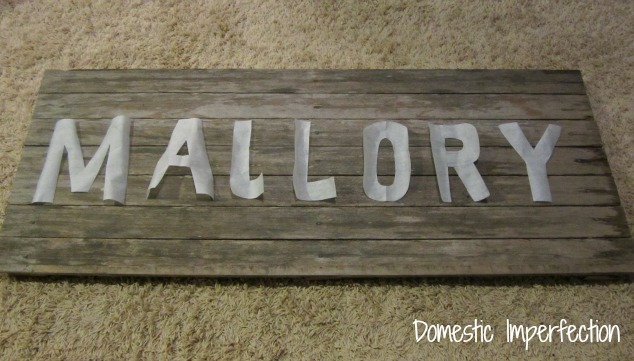 Next came the buttons.

Before I go any further let me show you what I wanted the overall room to look like. Yes, the whole room…my brain kept going from “I want to make her something HUGE!” to “I want to decorate her whole freakin room!” I had found the fabric below and instantly loved it, so I bought a bunch so I could make curtains. (Kiki Pinata by Robert Allen at fabric.com.) 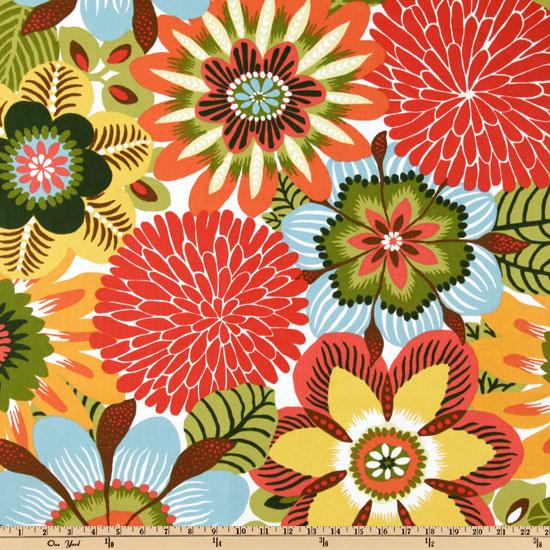 Isn’t it awesome? Perfect for a little girls room – colorful, fun, and feminine and not overly pink. I choose blue for the walls…like the blue in the fabric, only lighter and more on the neutral side. For the buttons on the sign I wanted varying shades of pink and green.

You know what else is hard to find? Buttons…especially buttons like I wanted in mass quantities. Also, buttons can be kinda pricey, especially at craft stores. I ended up buying all my buttons from a website called Buttons Galore. One of the ways the sell buttons is by color, so they sell big packs where all the buttons will be shades of pink, but different shapes and sizes. Basically exactly what I wanted.

I bought packs of pink, green, and orange and started filling in my traced letters. I got about two letters in before I stepped back and realized that it looked terrible. All those colors together were too much. 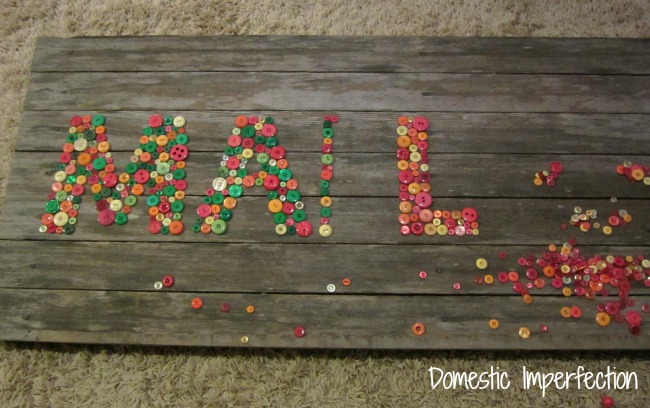 I tried it without the greens and it looked much more harmonious.

Here is the beautiful part of my mistake. Adam and I had recently finished the penny countertop in our kitchen and our mistakes on that were fresh in my head…I knew to NEVER glue things down until you are ONE MILLION PERCENT sure that they are EXACTLY like you want them to be. Thank goodness for mistakes right?

So starting over was easy. I Even let Elijah do it because he had been itching to destroy him some buttons. 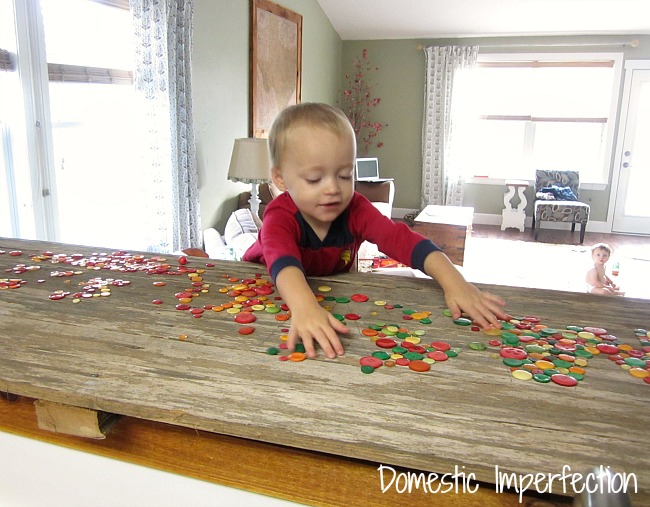 Then I started over, this time tediously gluing each button in place.

The final step is the most important – last thing I would want is for a button to pop off and have my niece choke on it. After all the buttons had been glued down I taped around the letters and completely covered them in Mod Podge. 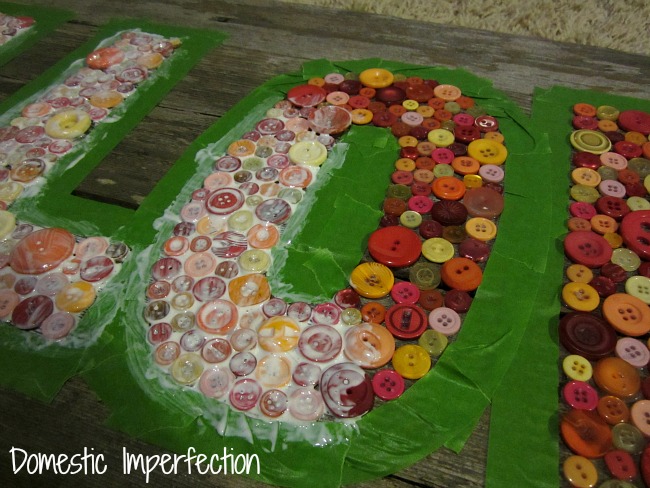 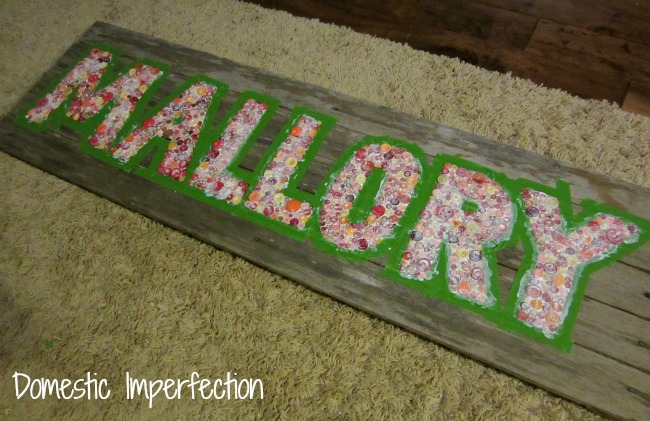 The Mod Podge dries completely clear so you don’t even know it’s there. But it is, heroically guarding my adorable niece from death by button. 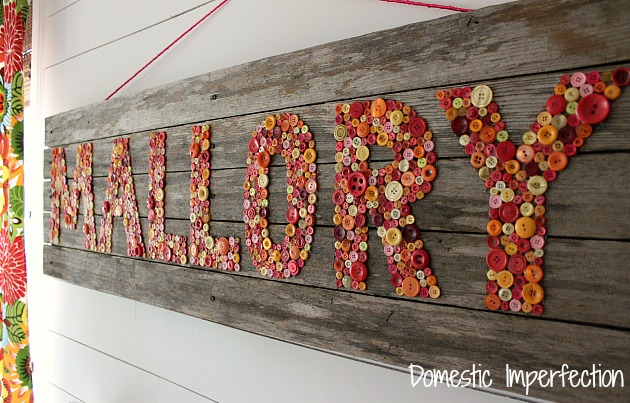 In case you’re wondering why the walls aren’t blue and I’m not showing you the completed nursery, it’s because my BIL & SIL’s house is undergoing a complete gut job remodel and there’s not really a room to show you. In order to take pictures of the completed sign I brought the sign home and staged it in my kitchen. 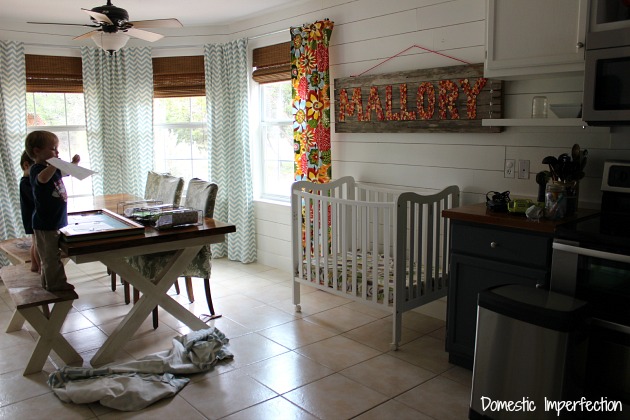 « Carving Pumpkins with a Drill
How to Refinish Outdated Tile (yes, I painted my shower) »