For a long time I was doing really great at keeping up with blogging about progress on the house, but I’ve since fallen a bit behind. I’m going to do my best to catch up though, and today we have a thrilling post about texture and primer (which actually happened about two months ago).

So the last time I updated y’all on the inside of the house it had just been drywalled. 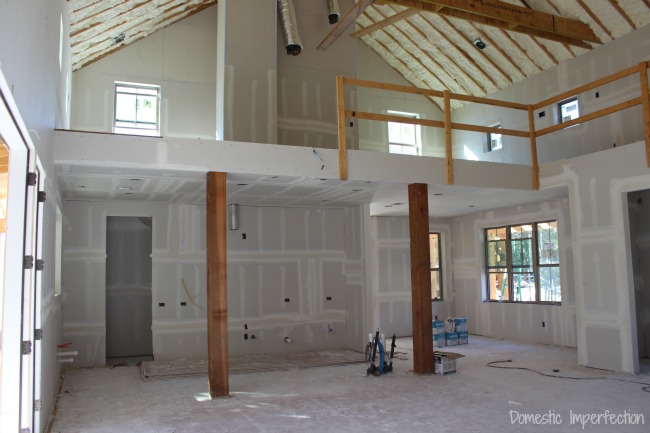 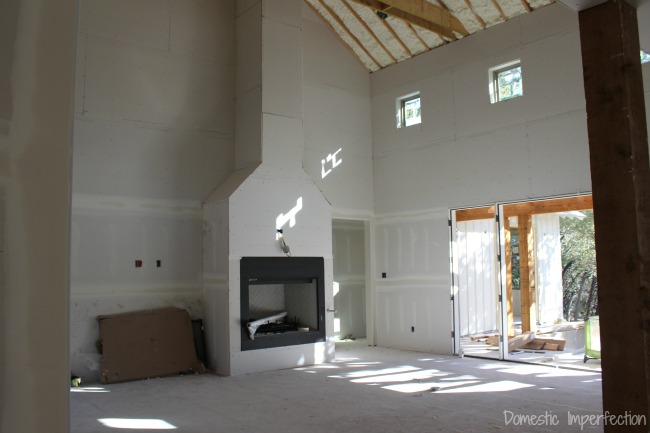 The next step was texture. I know that texture is very different based on where you live, and around here walls are textured…usually in a bumpy texture called orange peel. I remember when Adam and I moved to upstate New York, none of the houses had texture. All the walls were completely smooth, which I thought it was weird…and kinda awesome. (There was also a serious lack of closet space, ceiling fans, and overhead lighting, which I did not think was awesome.)

In the original bid for our house all the texture was quoted as orange peel. Adam and I don’t love orange peel…it doesn’t feel very original or unique, plus it’s just kinda ugly. Upgrading to a different texture is expensive though…which is basically the same story for every single element of building a house.

I had always kind of had it in mind that I wanted our house to look like a hundred year old farmhouse with additions, so I requested texture based on what “time” each section was built (if that makes sense). Here is a picture to help… 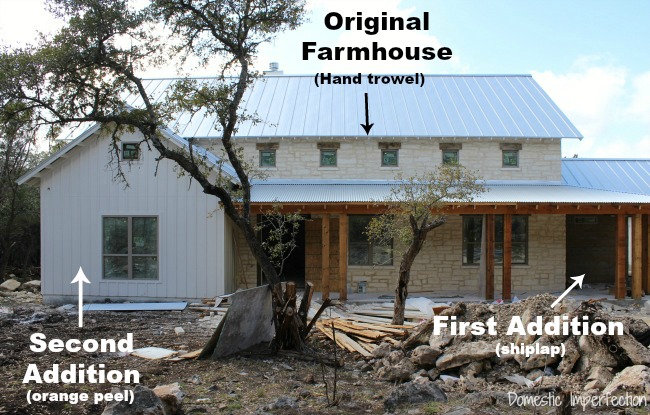 Hand trowel texture (like plaster) is something that would have been done back in the day and is the closest we can get to a smooth texture, so I had the main section of the house was done that way. The mudroom/laundry addition (on the far right) will be getting shiplap, which means I had them skip the texture completely in that section. The bedroom wing (on the left) would have been the most recent addition, so that got orange peel. All in all the changes cost us $1,000 over the original bid.

I didn’t get any pictures of the texture going on (they did it crazy fast and I missed the whole thing), but here is what the orange peel texture looks like in the bedrooms and hallways… 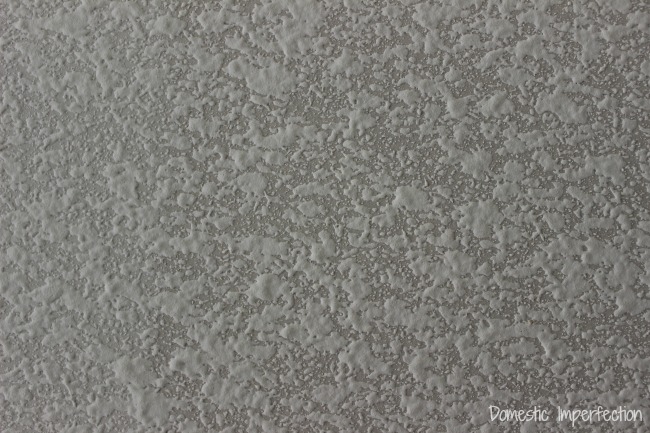 And here it is after a coat of primer… 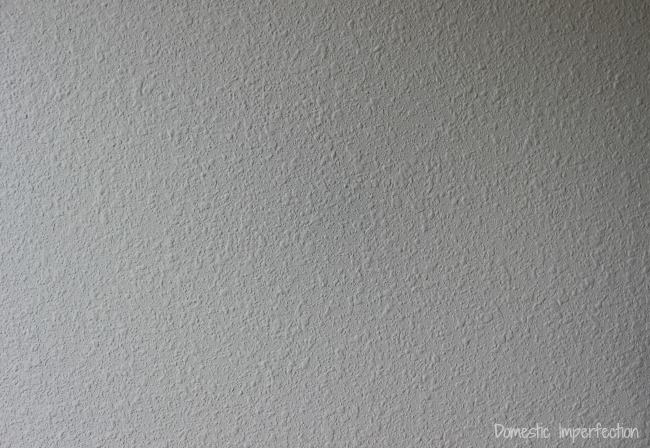 Here is a close-up of the hand trowel texture, which is pretty much a smooth with a few lines in it. 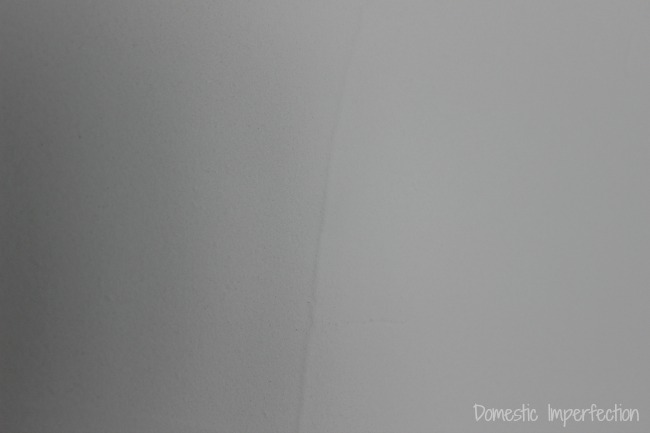 It’s hard to get a picture of because it basically looks like nothing, so here is a slightly pulled back picture that includes a worker’s hand print.

Get it…HAND trowel? I know I know….such quality entertainment around here. Tell your friends. 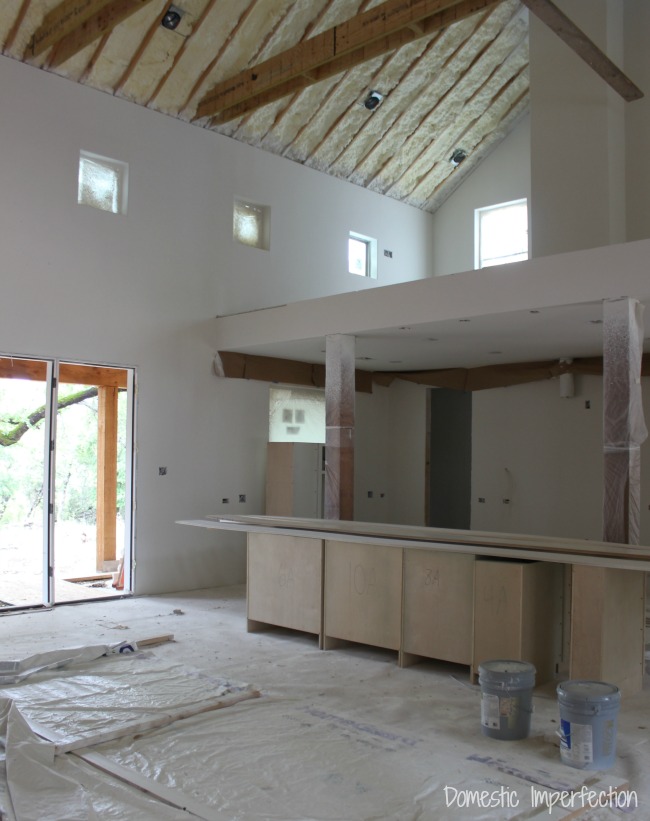 I am loving how light and bright it is.

The inside of the house from this stage on is up to us to finish, the builder is basically done on the inside. We originally planned to be all gung-ho about it and DIY our little butts off….but they are big jobs, we have a deadline (it has to be finished by September so we can close on our construction loan), and extra time and energy is hard find these days. So we are getting quotes on all the jobs as they come, just to make sure the savings are actually worth the effort. Most of the time they are, but sometimes the task is something Adam is really dreading (like hanging all the tin up on the ceiling) and it is easier for him to work a few overtime jobs and me to pick up an extra sponsored post and pay someone to do it. ANYWAY, all that to say that we got a quote to have someone prime and paint our house, and it was $8,000. Jiminy Christmas…ain’t no way.

So Adam did his research and bought a paint sprayer. We already have a little one for smaller projects (this one), but to paint a 2,900 square foot house with 27 foot ceilings we were going to need something way bigger and more powerful. He ended up buying a Graco Magnum X5 airless paint sprayer, which cost less than $300 on Amazon. 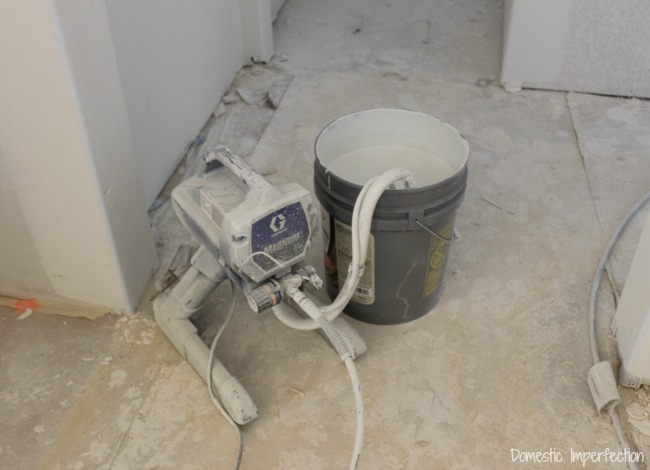 Adam isn’t easy to impress when it comes to tools (or anything really) and he RAVES about this thing. I can’t vouch for it because I’ve never used it, since he told me to keep my dirty tool-breaking hands off it (which is a smart move on his part and great news for me, as I have no desire to paint the entire house.) 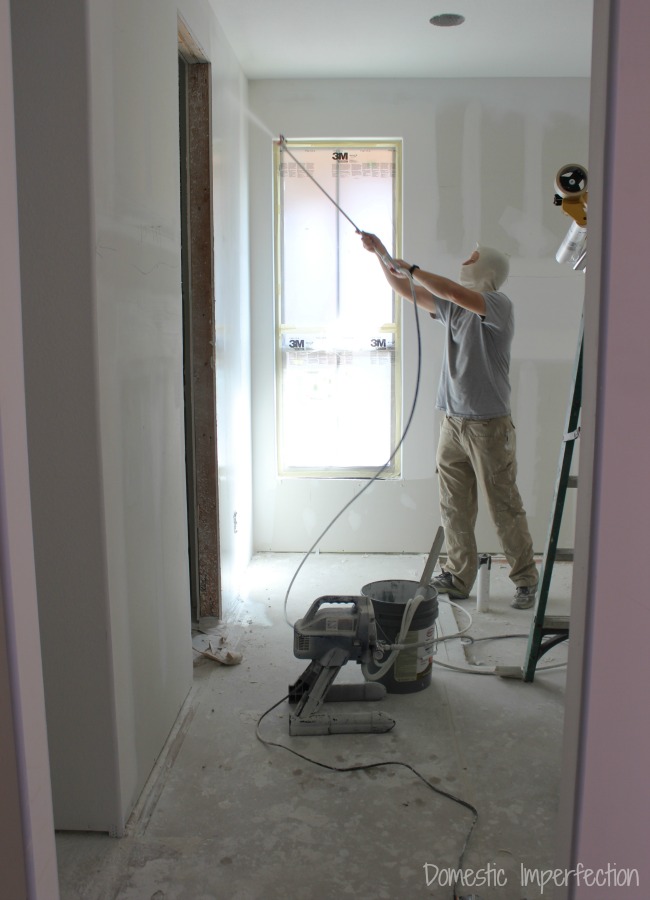 He ended up being able to prime the entire house (every wall, ceiling…everything) in total of about 4 hours. 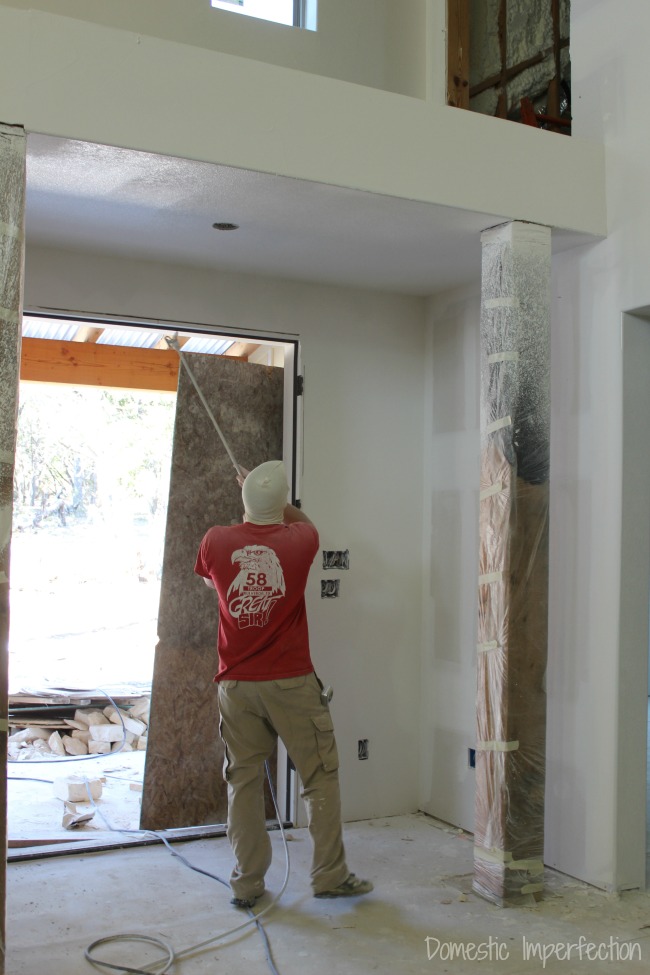 Isn’t that crazy? I mean, painting a single room with a brush takes that long. If he can paint in about the same amount of time we will be saving 8K for basically a long days work and a $300 paint sprayer. 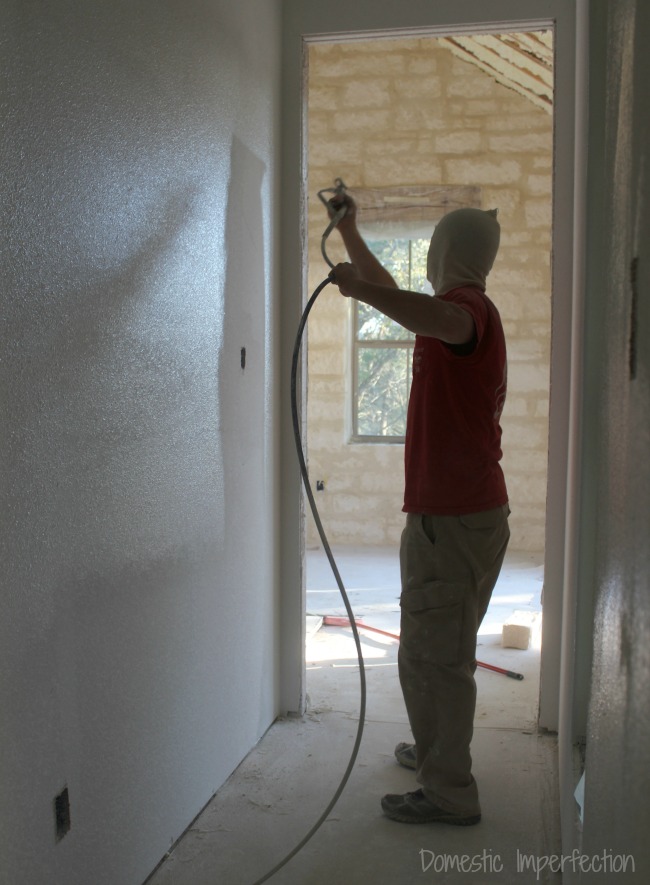 Oh, and last but not least, this is the primer we used… 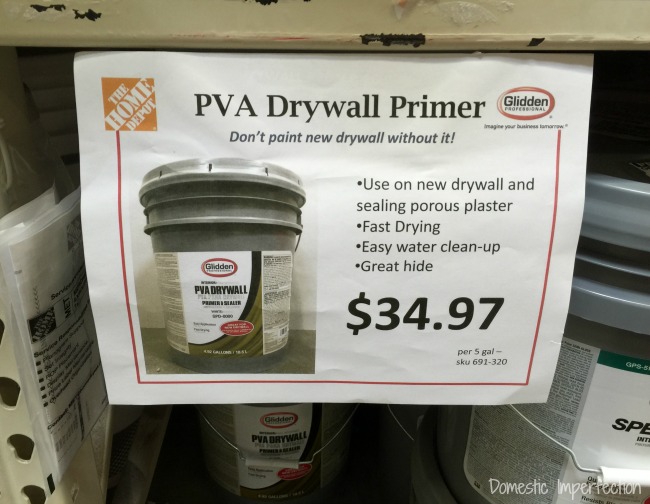 After trying out different primers and learning from friends who just went through the same thing, everyone agrees this was the best primer for drywall. It also happens to be the cheapest primer in existence, at $35 for 5 gallons. we used 10 gallons, so it only cost 70 big ones to prime the whole house. I’m beginning to think Adam should quit his job as a police officer and start painting houses for a living.