This summer when I started blogging about building our house, I mentioned that some good friends of ours are building the exact same one. In case you just went “WHHHHAT?”, here is the paragraph about it from that post…

“We have some very good friends, Darin and Jody, that bought land shortly before we did. One day the four of us were sitting around talking about our future homes (probably sometime around last Thanksgiving) we realized something…we wanted basically the exact same thing, we have the same taste, and each want to do a lot of work ourselves to save money. So we did the only thing that made sense….we decided to just build the same house. The four of us designed it together, are using the same custom builder, and are going to help each other with all the DIY projects along the way. We both plan to have the builder build the “shell” of the home – finish the outside, get up sheet rock and texture, rough in plumbing and electrical…and that’s about it. We plan to do all the cabinets, flooring, fixtures, trim, painting, all that fun stuff. It should be interesting, especially considering that between our two families we have seven small kids.”

I didn’t plan on blogging about their house, because 1) I can’t keep up with that much blogging, and 2) blogging about their house would kinda ruin blogging about mine. I know because we’ve watched theirs go up and it has been the most exciting thing ever….and when we get to ours we’re like “Windows…ehhh. Seen it.” Not that I’m complaining…in fact, just the opposite. If you are designing a home, the best thing you could possibly ever do is have some of your best friends build it a few months ahead of you with the same builder. Invaluable. They are good sports :)

Anyway, the outside of their house is almost complete, and it looks so different from what ours will (except for being the same house and all) that sharing it won’t ruin anything. So here it is…. 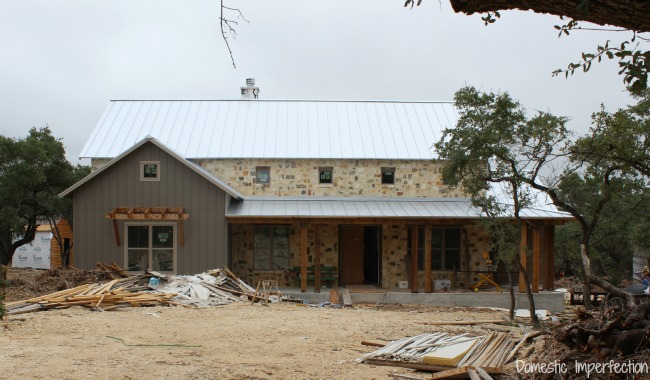 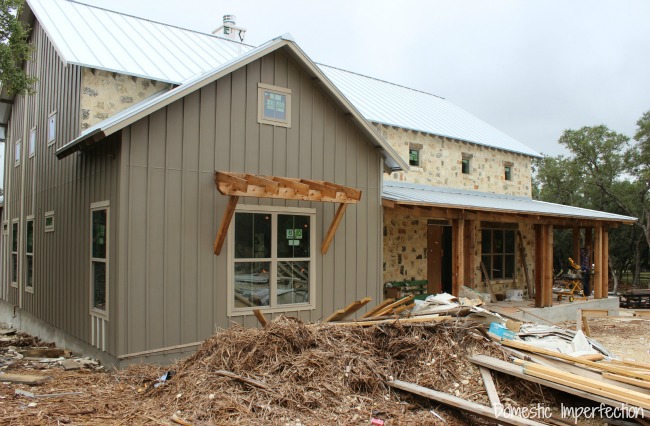 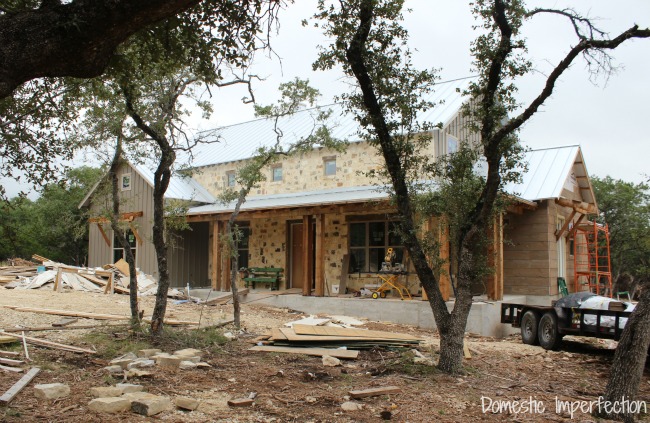 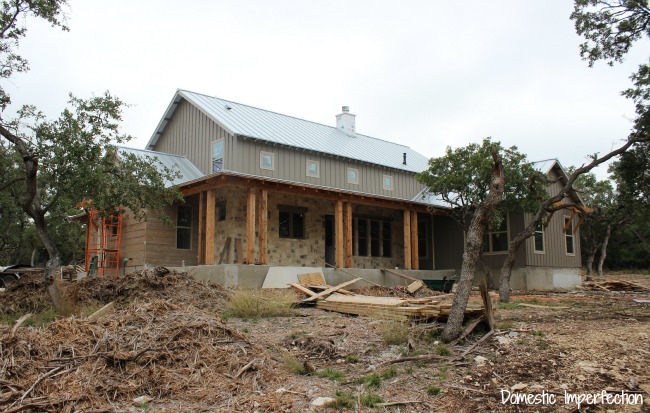 Isn’t it beautiful? Each time something new happens at their house Adam and I head over and check it out, and each time I am reassured that we did a great job designing this thing. The floor plan is practical and flows well, and it feels grand and cozy all at the same time. The outside looks amazing as well, I’m so dang excited to keep chugging along on ours and get to design, decorate, and live in it.

So, what are some of the differences between the two houses? Well, the colors, obviously.

They choose the same windows (clay colored from PlyGem) but they decided to match the window color for the trim and go with something darker for the siding. (Ours will be white). 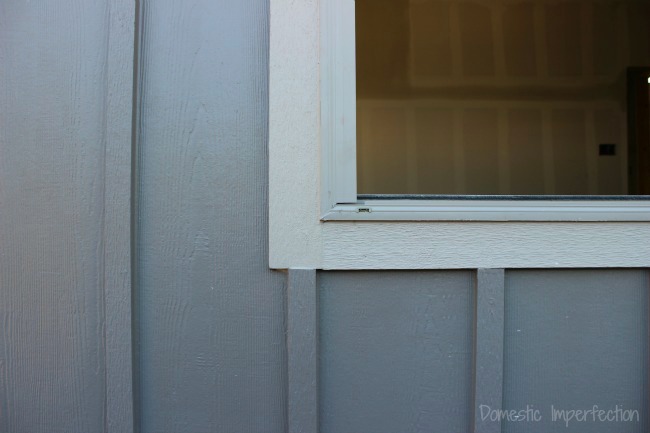 Their stone is also different…its darker, richer, and more varied in color. I think it looks great with the siding colors they choose. 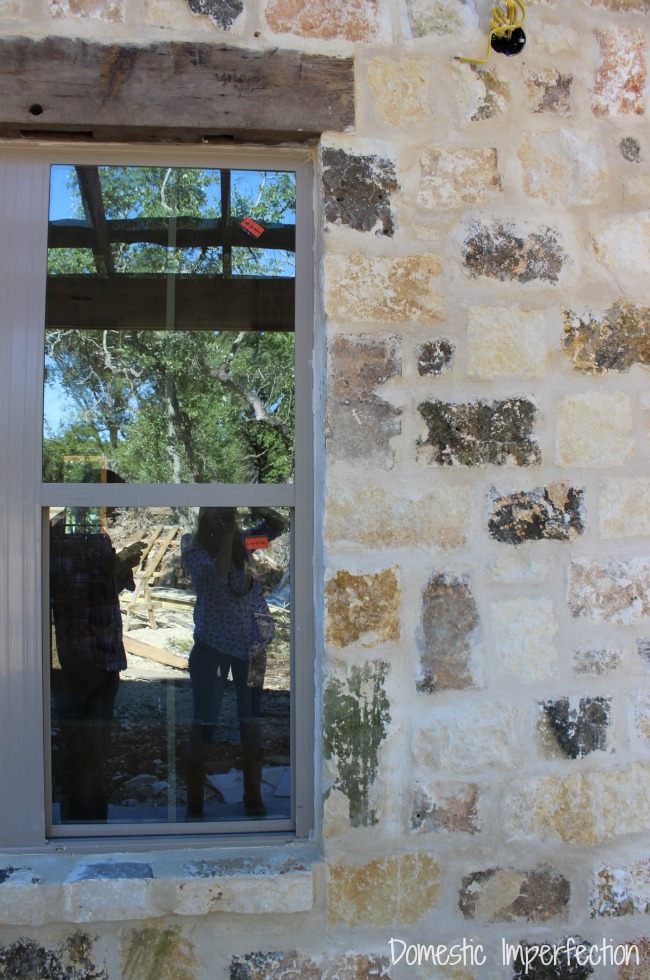 My favorite part is the rustic wood headers above the windows. 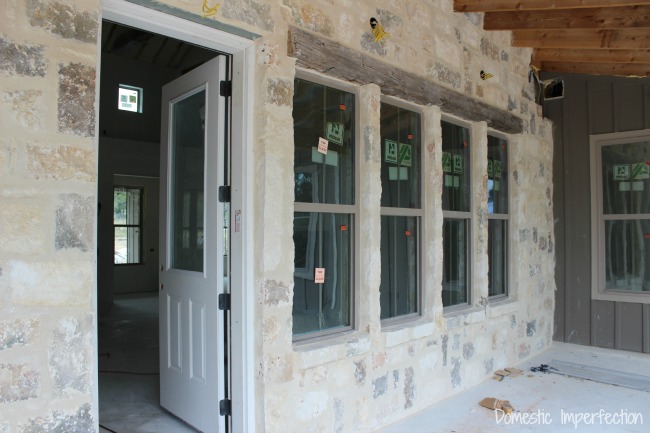 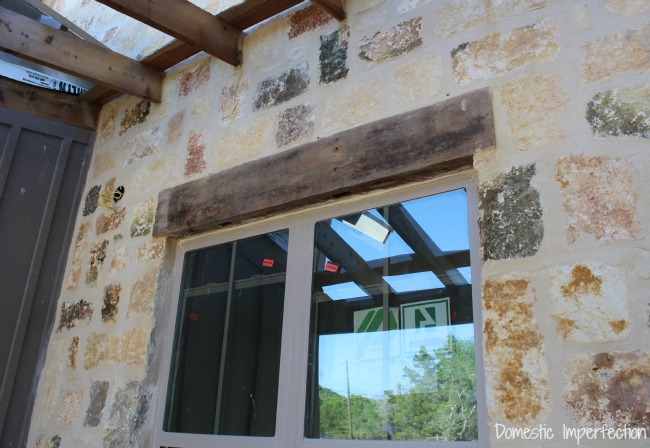 Adam and Darin put them in as the stone guys were working, they just bolted them to the house from the inside (before the insulation and sheet rock went in). They are seriously amazing, they make me want to jump around and squeal like a…a…I don’t know actually. Like someone who is really excited about wooden window headers.

The other differences are smaller, like some different windows and the front door being in a different location. Also, we chose different roofing for over our porches and garage, while theirs all match.

The big, glaring difference is that Darin and Jody’s barn isn’t attached to the house like ours…plus their barn is an actual barn, complete with horses and everything. Allow me to give you a tour. 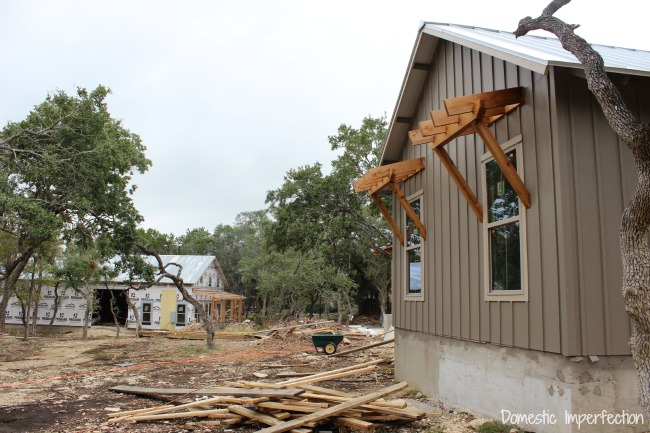 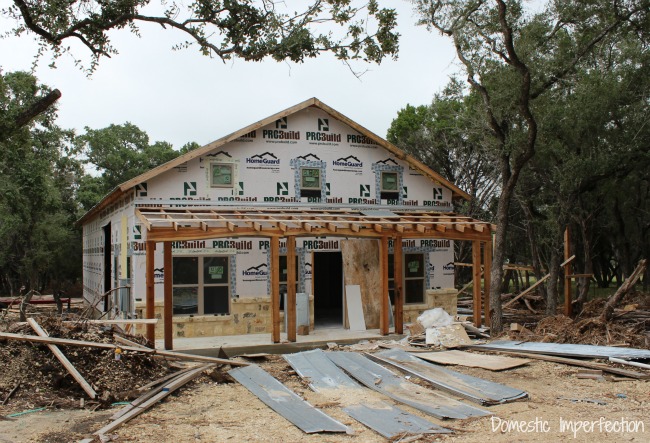 So the front part is a guest house. Not like the one we have planned, a real one. It’s about 900 square feet, with two bedrooms (or one bedroom and a loft). Darin is from South Carolina and Jody is Canadian, so their guest house is going to be put to good use and will likely have parents residing in it. 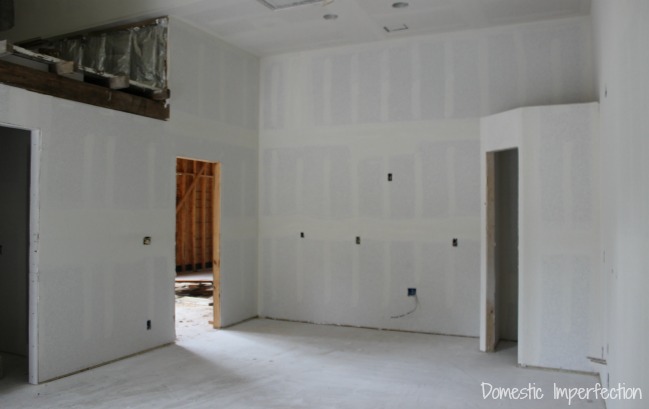 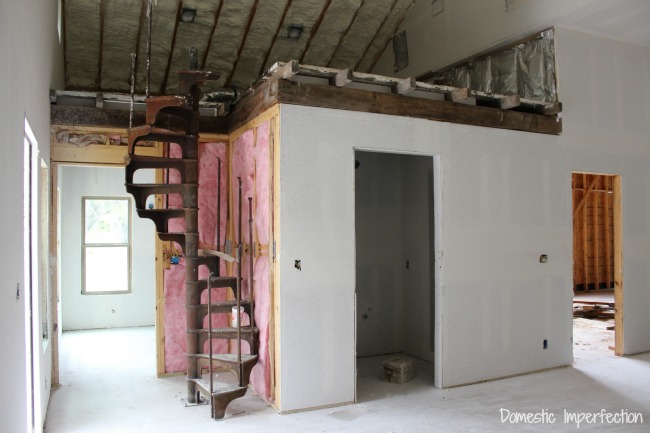 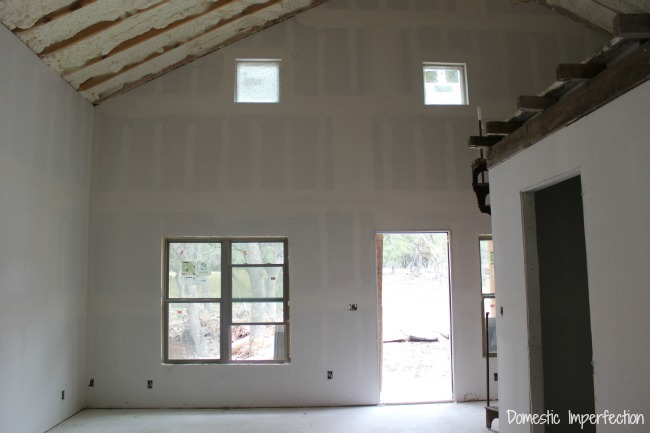 See the wood he used for the ceiling/floor? 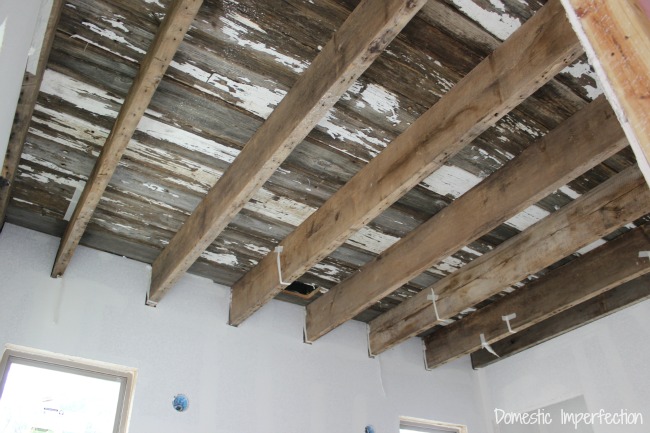 That’s the old bleachers from the high school Adam and I went to. So cool.

The back is a workshop/storage/horse stuff. It’s huge. Our’s is 25X50 feet (still huge, no doubt), theirs is 30X60, plus a front porch and horse stalls. 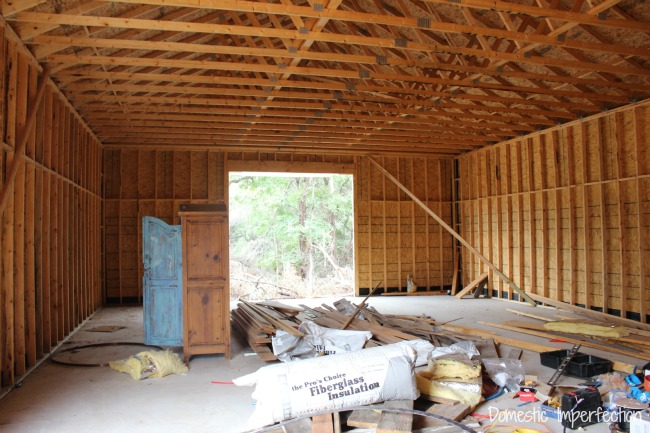 I think it’s safe to say there is plenty of room for projects. Pretty soon this will turn into a workshop where we will be building cabinets for our kitchens. And when I say “we” I mean Darin and Adam will be building and Jody and I will be keeping seven children alive.

So that’s the tour! One day I will show you the inside…but that day is not today.

« Picking an exterior paint color
How to Make a Lego Table »