So my sliding barn door failure isn’t the first barn door hardware Adam and I have DIYed. About 18 months ago this beauty was created… 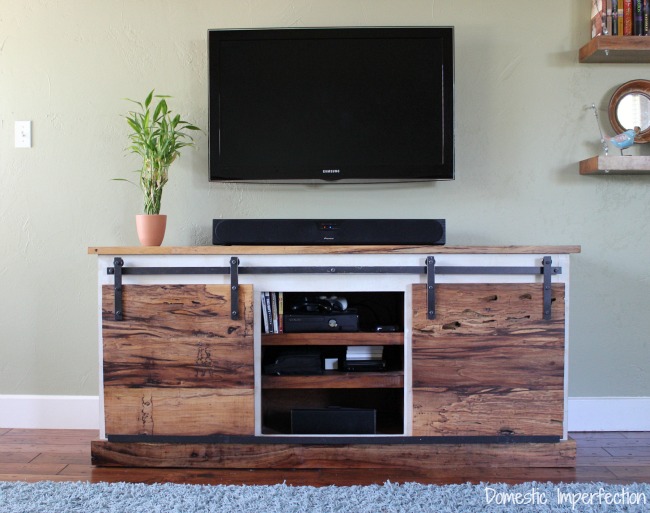 I never blogged about it for two reasons…

So this project started when I saw Jaime’s sliding door console she made for a contest entry. As soon as I saw it I loved it (an instantly voted for her.) 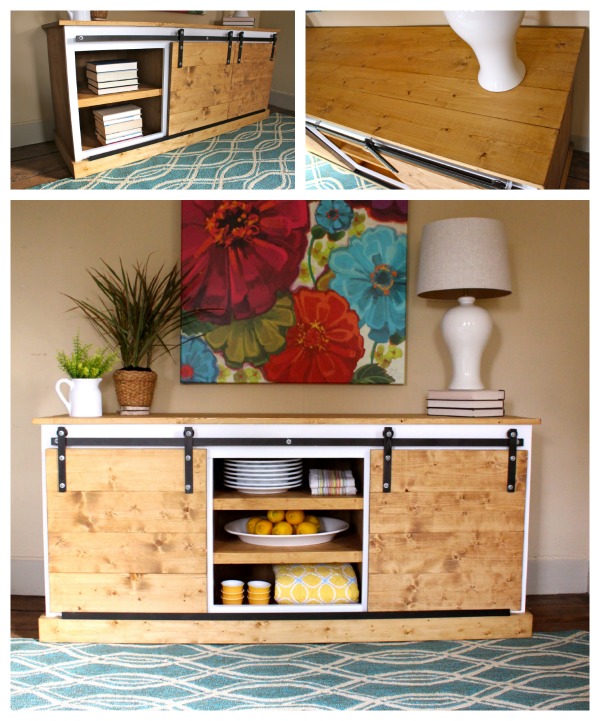 She based her build on this dreamy Yorkville sliding door console at Sundance, which sells for the cool price of $2,995 + $400 shipping. 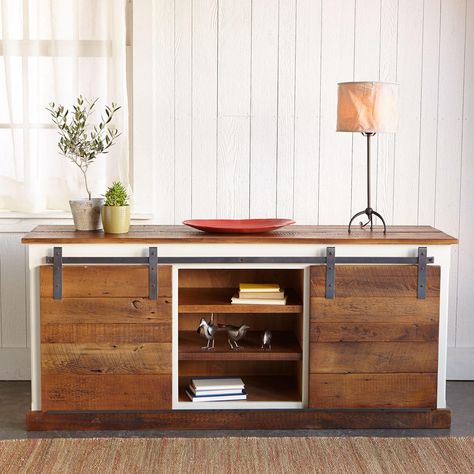 Here is ours. Adam built it out of Purbond plywood and some pecan he and a friend milled themselves (it’s the same pecan we used to build this dining table). It’s pretty much the most awesome piece of furniture ever. 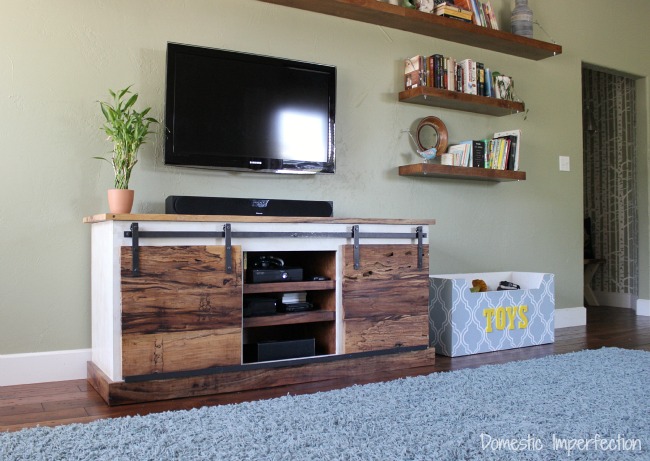 To finish it I stained the inside, painted the outer part white, distressed it with stain, and gave the whole thing a matte clear coat. 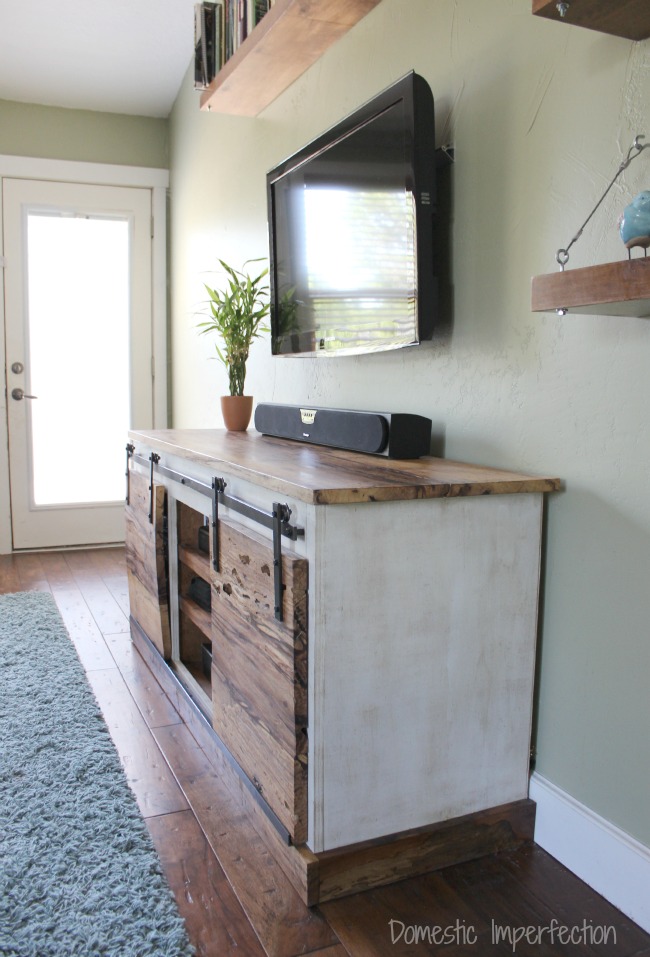 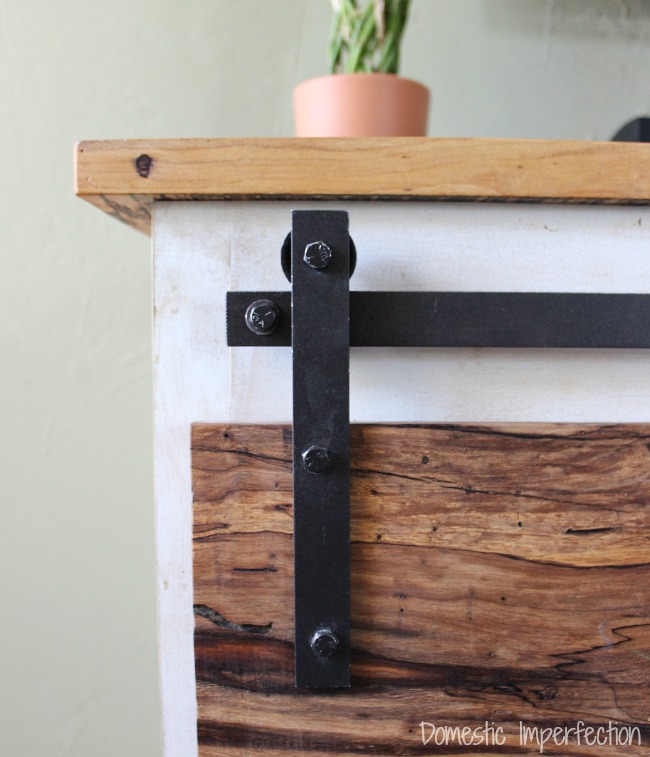 The hardware is made from aluminum bars and awning pulleys. It works – don’t get me wrong – and the sound it produces doesn’t make me want to rip my ears off like the other DIY hardware…but it’s not great. The main problem is that the wheels need internal bearings to roll smoothly. Right now, if you slide them around enough the wheels get loose and fall off, but if you tighten the bolt so that doesn’t happen then the wheels won’t roll. You can’t win. 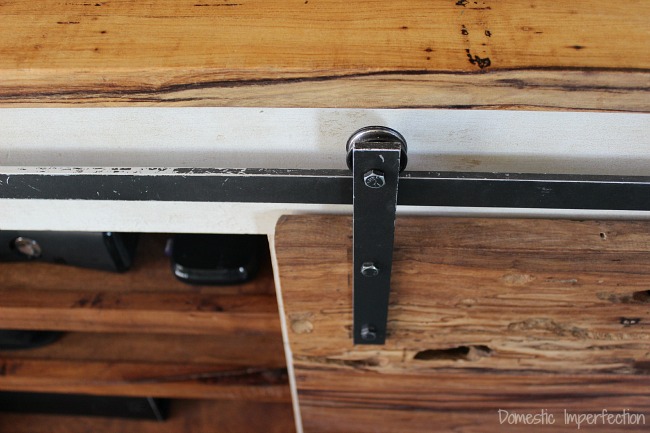 It’s okay though, we really don’t slide the doors all that often. (Just enough for the spray paint to wear off.) 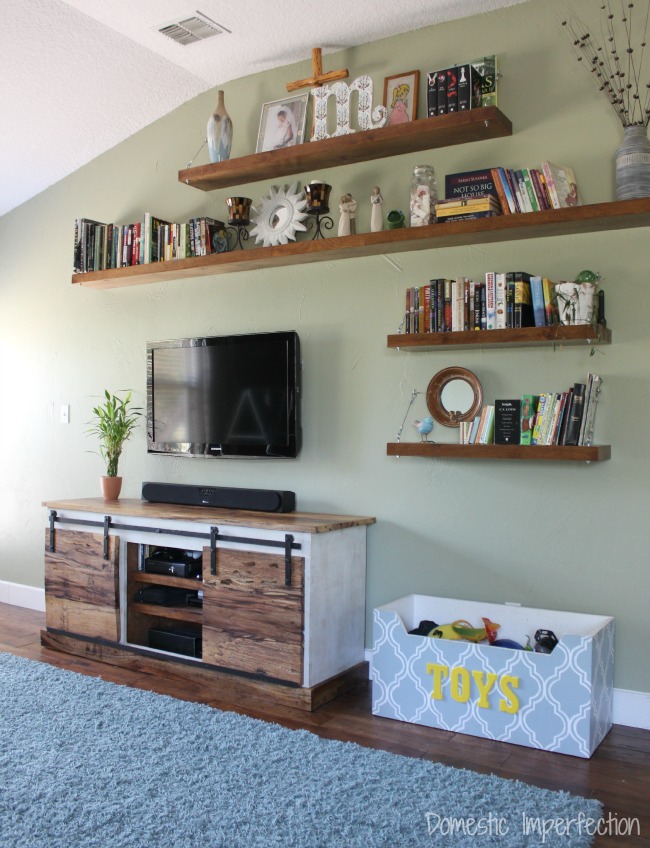 Anyway, I obviously don’t have any sort of tutorial for you today, but if you are interested in making one here are a few resources –

That’s My Letter – This is the tutorial we used. She builds the box and also shows you how to DIY the hardware. 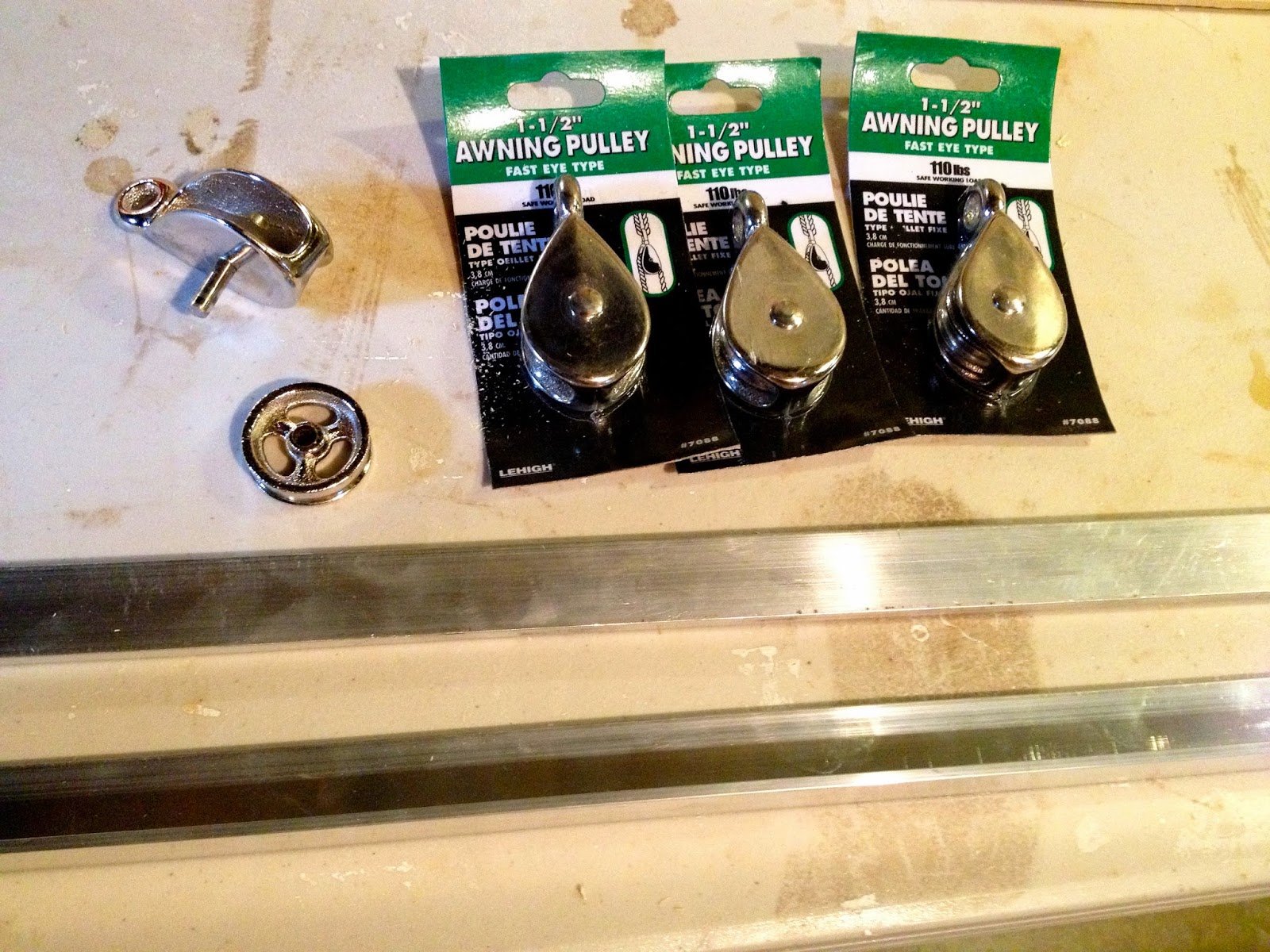 My kids toy shelf post – This is the same shell as the media center (we built this at the same time) and there are some building plans in this post. 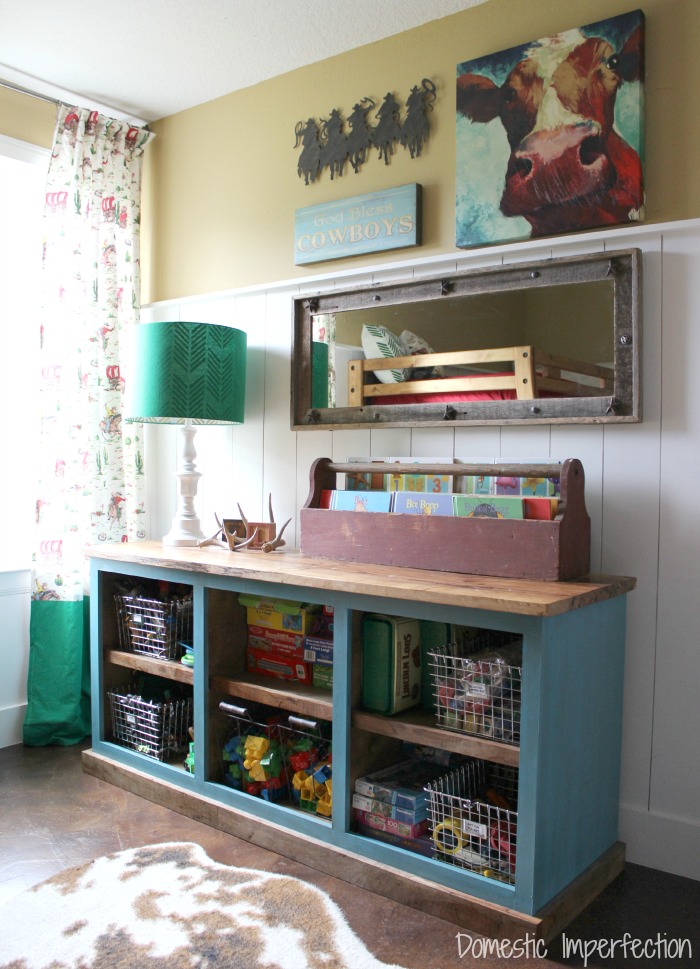 Ana White – her website has plans for a very similar console. 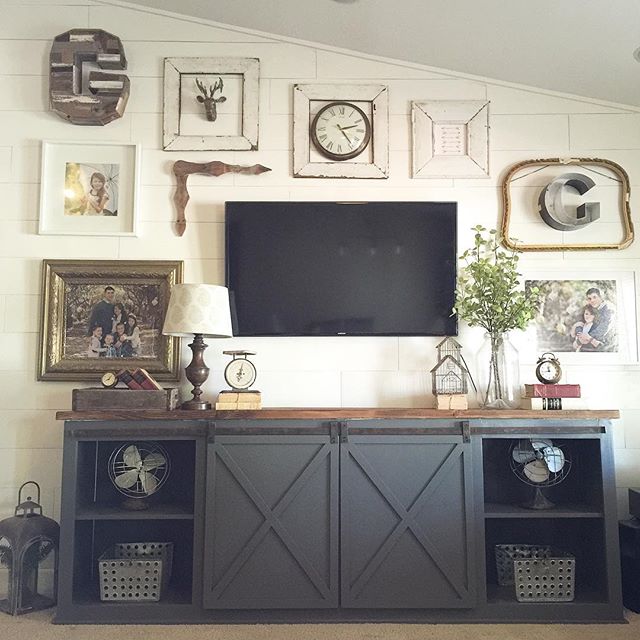 If you want to buy barn door hardware and not DIY it (which is what I would do) Amazon has a well rated set for $85. I’m thinking of replacing ours with this set. 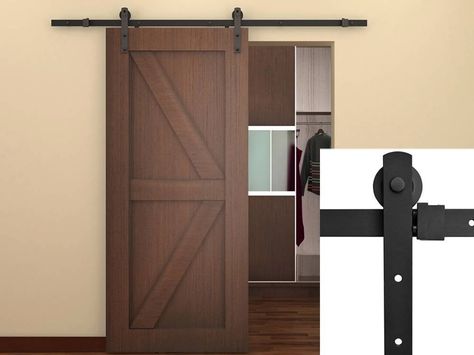 So that’s the story of our media center! (Well, sorta…)

In other news, our new house is complexity framed and I’m working on a post for later this week. It looks amazing and I can’t wait to show you!