I’m going to take a wild guess and say that most of my readers enjoy DIY, and also that a lot of you have kids. And as you are probably are painfully aware, those two things don’t always go together all that well. So here is a list of things that I do to make DIYing with kids possible. It isn’t the kind of list that is full of brilliant tips and ideas that you never thought of, this is just me chatting about what Adam and I do personally. And just for reference, we have four sons ages 7, 5, 2 and nine months.

I know that having kids help with DIY projects isn’t the easiest thing. In fact, it is exactly the opposite….it takes longer, is messier, and generally much more frustrating to have a preschooler getting all up in your DIY business than blissfully DIYing by your lonesome. However, letting them help is important. They will learn new skills, think you’re cool, and learn to value both time and money in the process. People in our family are hard-workers and I want my kids to see that and participate in that. Plus, they are super cute in painting shirts that are too big and wielding tools they have yet to grow into. 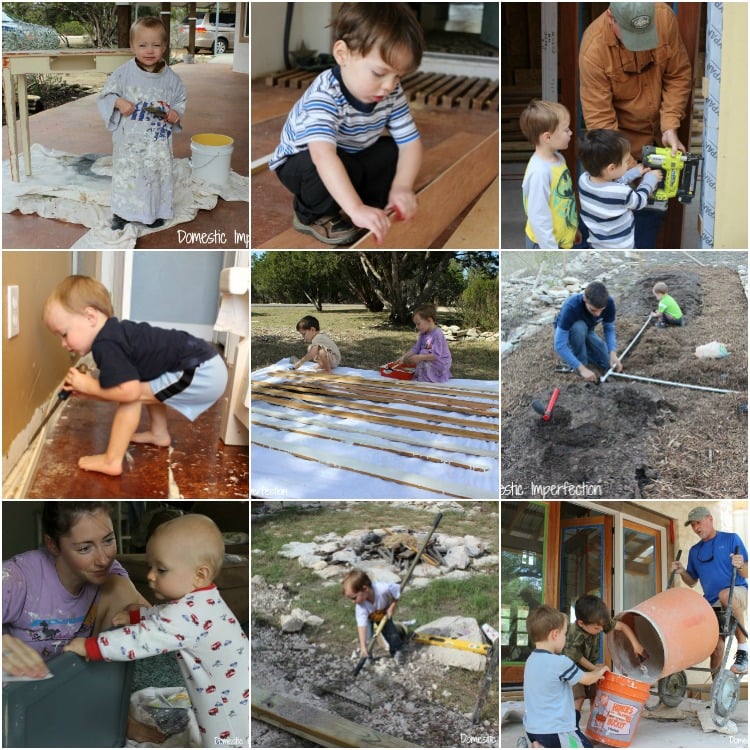 It’s funny how different kids are, right? My oldest son is very energetic and hands on, he loves to work and is always game for a project. He doesn’t’ care what project, he just wants to be involved. My second son is more of a thinker, he would rather sit still for hours and color and read books. He also loves to talk, he is never happier than when he can sit and talk to an adult. He will talk through the entire project with you, wanting to know exactly what you are doing and why without ever actually helping. He will talk about anything too, sometimes it’s dinosaurs, sometimes it’s how terrible his brothers are, and sometimes it’s credit card debt. Seriously, the other day when I was doing a project he was asking questions and we started talking money. He now knows all there is to know about working hard and saving, how it’s bad to borrow money, interest rates, credit vs debit cards, mortgages, you name it. He asked questions and understood it and will tell you all about it if you ask him. He’s five by the way…I have a feeling he is going to be a very wealthy man one day. 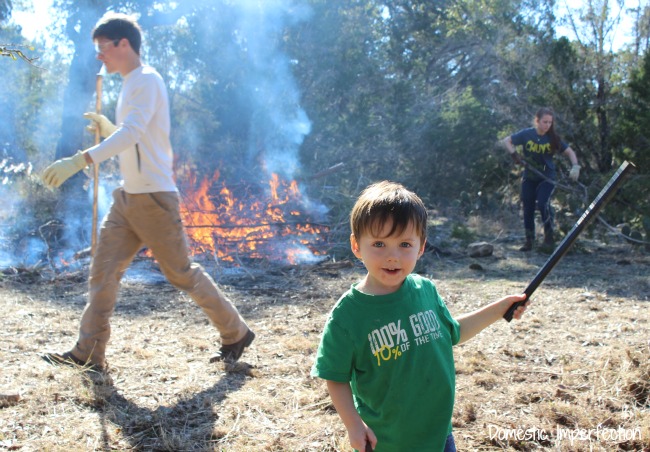 Tell them to leave you alone

Let’s face it, even when you let them help and it goes wonderfully they are not going to stay engaged long enough to see the project through. My boys, no matter how interested they are in a project, just do not have attention spans that last that long. So I tell them “I’m working, you need to go play.” That’s it. I generally don’t give them directions or set up an activity for them. I have a lot of jobs as their parent, but providing them with constant entertainment isn’t one of them. I’m even meaner than that though, because if they come whining that they’re bored I give them chores, and if they end up just fighting with each other I make them run laps around the driveway. 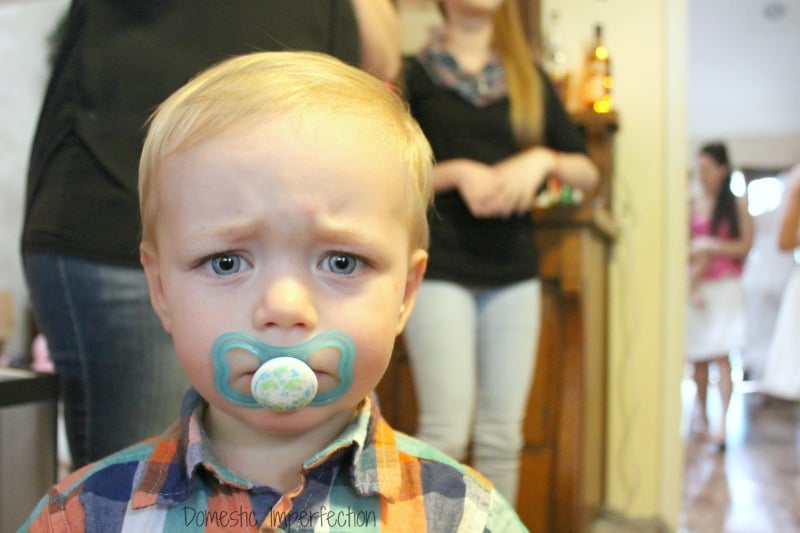 My two-year-old third son, upon realizing that he didn’t get one of those sweet, doting, compassionate sorta moms.

Gotta love naptime, right? My two younger ones still take naps (and sometimes I’m even lucky enough to have them overlap), which is a great time to get things done. It is a little rough because sometimes projects are loud, but I find that if I tell my kids what to expect the noise isn’t a problem. For example, as I am writing this I have a crew of guys here putting up planking in the living room, and there are saws and nails guns and air compressors all making a racket….and my toddler is sleeping right through it. I told him when I put him down that the workers are here and it is going to be loud, and if the noises wake him up not to be scared and just to go back to sleep. The baby is a little bit harder, but a white noise machine cranked all the way up goes a long way. My two older ones don’t nap, but I will either enforce a “quiet time” for them or do one the three above options. Soon they will be back in school though and naptime projects will be a lot easier.

Also, post bedtime. Post bedtime is literally the best thing ever, and I stay up way too late just because I cherish that quiet time so much. I would rather not get enough sleep each night than waste some of those precious hours sleeping. Usually, I use this time to blog or veg out in front of the TV, but if there is a project that needs to be finished this is a great time to do it. The best, really. Zero kids y’all, ZERO. 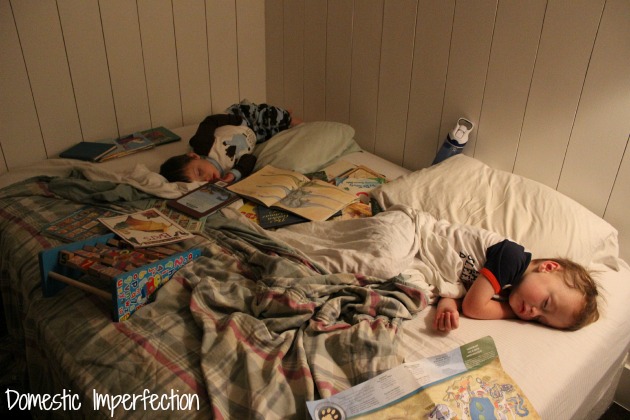 Turn on a screen

I’m not a big fan of plopping my kids in front of a screen, but I’m also not an idiot. Screen time = quiet and quiet is probably the thing I desire most these days and get the least. Plus, there are so many shows now that teach kids all kinds of good stuff, it’s not like it’s all just fluff. I mean, my two year old can count and recognize all his letters…and I didn’t teach him that, TV did. Anyway, here is a list of shows my kids enjoy and I approve of (we have Netflix, Amazon Prime streaming, and a Roku).

We also have an iPad, I bought it for Adam this Christmas to replace his broken laptop and the kids instantly took it over. It’s like they were born knowing how to use it. Anyway, for this particular screen I set the timer and the big three each gets 20 minutes, then I take it away. I have to be strict with this one or they get obsessive. 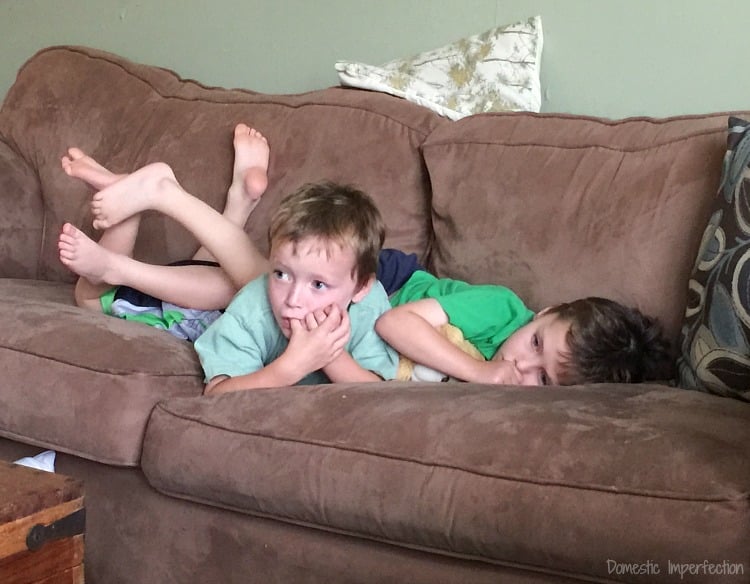 Anyway, that’s how things work around here. How do you handle projects + kids in your house?