The 40 bags in 40 days challenge ended a couple of weeks ago…how did everyone do? I did pretty well. My house still isn’t an organized haven, and I wasn’t the ruthless, hard-hearted, clutter destroying machine that I had hoped to be…but I still got my 40 bags. More than 40 actually. When I first read about this challenge 40 bags sounded like a lot, but I only tried medium hard and easily got that many. I could definitely do this every year with no problem. Obviously I have too much stuff.

Want to see some messes and some before and afters? I though so.

The very first day the challenge started I was all pumped to destroy clutter and decided to start with the worst area…our master closet. 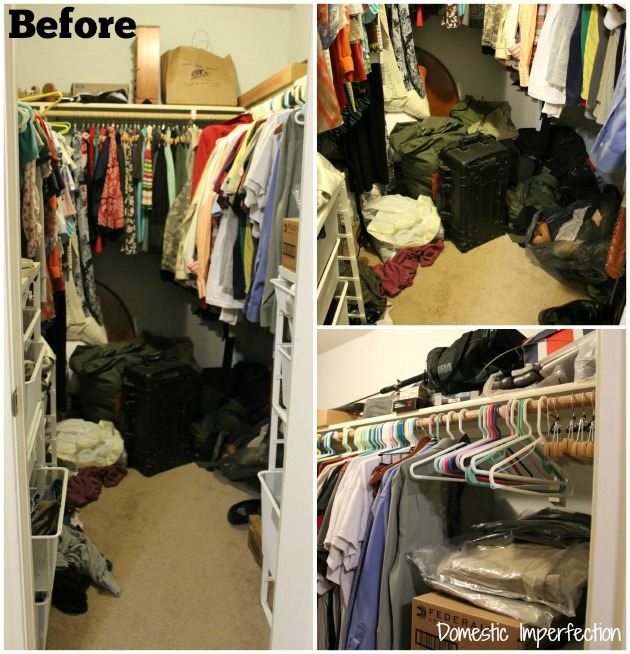 We have some issues going on in there for sure. Not only does it store both our clothes and shoes and everything like that, but also all of Adam’s man stuff (military supplies, spear fishing equipment, guns and ammo, motorcycle stuff, etc). It even houses a cherry table top he built for us when we were first married. Problem is, we don’t have anywhere else to store this stuff, so for now it has to stay. Then there’s the whole clothes issue. I feel like we have a lot of clothes (I’m sure it’s a normal amount though), but most if it is, well, unimpressive. At best. Adam and I have always been budget minded (even before we met) so most of our clothing is hand-me-down from friends, goodwill finds, or from the Ross clearance rack. Not that there is anything wrong with that…but most of it is about a decade old, especially my husbands. He wears these old t-shirts that say random (usually ridiculous) stuff, and they’re all cracked and faded. We need grown up clothes….clothes that ultra hip 30-year-old parents would wear. Not that were all that hip, and I’m only 29 thank you very much….but you get the picture. And while I would like to ditch about 80% of our closet and start over, we are going to go about it a little more slowly than that. So I purged the worst stuff and came away 12 bags of clothes to donate and one bag of staining rags. It’s a good start. And who knew…there’s a floor in our closet! 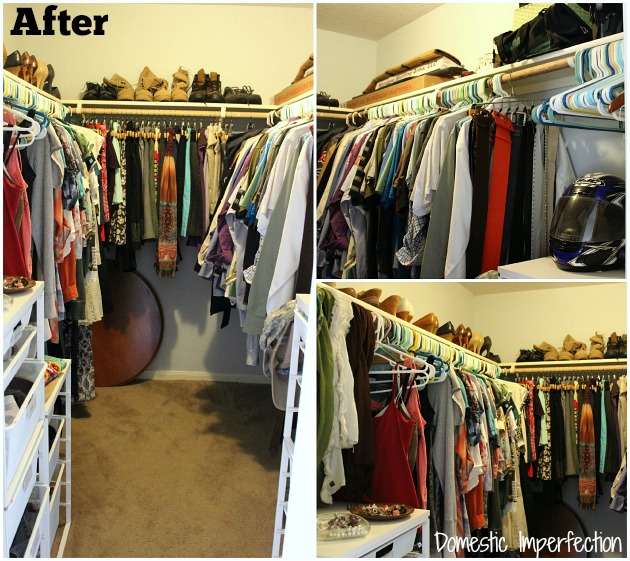 Next (which was like a week later, I had to recover) I took on the linen closet and the drawers in the vanity. I got one big bag of trash, one of donations, and a lot of organization. 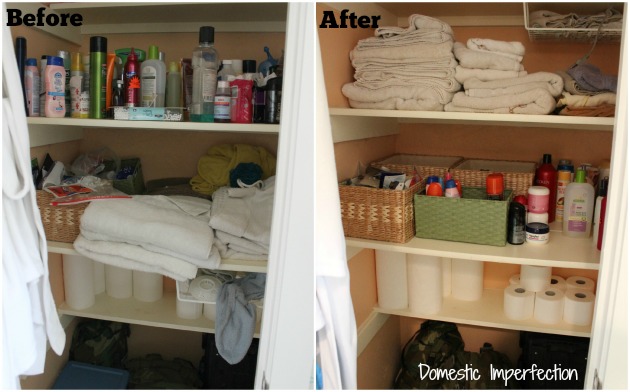 Then I talked myself into taking on the dreaded craft closet. I forgot to take a before picture of this, but I have plenty from years past since I’ve always struggled with this area. 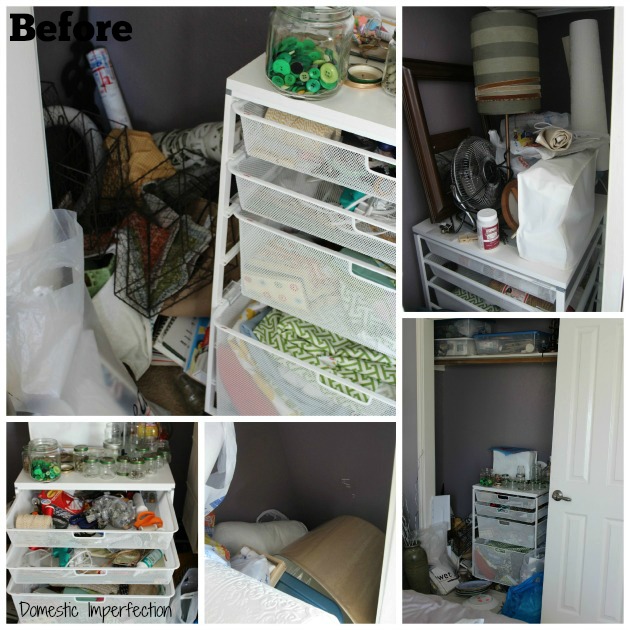 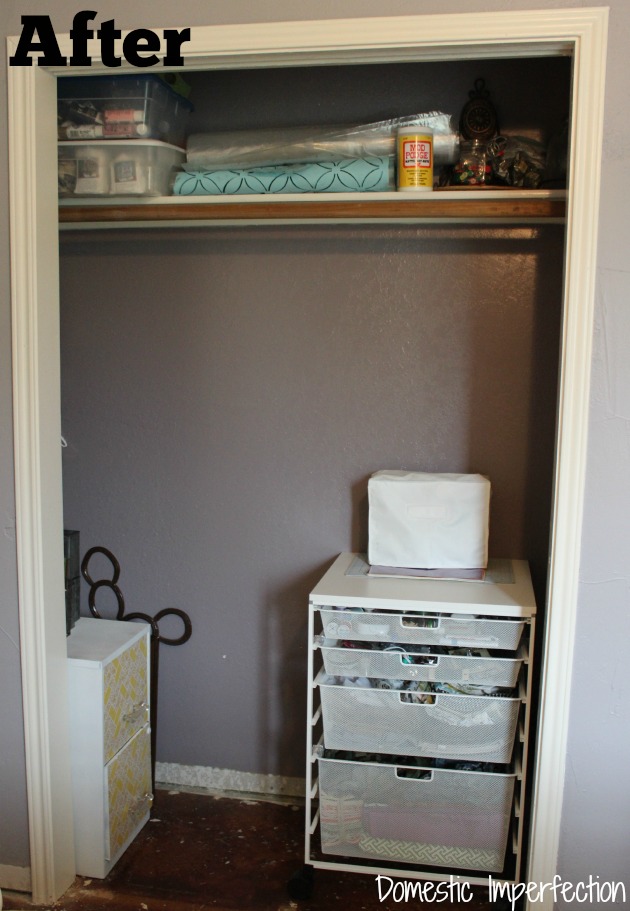 I have plans to make this space a functioning office, but that won’t happen anytime soon. For now I’m pretty excited about the state it’s in. I got six bags total from this area.

The kid clothes was the next area that needed attention. My boys clothes drive me nuts for a few reasons. Number one, they destroy clothes SO FAST. They basically get to wear things once before looking like a couple of ragamuffins. I buy their clothes secondhand and always accept hand-me-downs, so stains aren’t the worst thing ever, but still…it’s frustrating. Number two, they are SO stinkin close to wearing the same size…but they aren’t quite there yet. So we have a ton of clothes that all look the same size, but some go on one kid and some on the other. I pretty much have everything memorized, but Adam is at a loss when it comes to picking out the kids clothes. He is happy to dress them, but I have to lay everything out first. Anyway, I purged their clothes (including all the smaller stuff I’ve been holding onto for future babies) and came up with five bags to give away. Too bad this hasn’t resulted in less laundry! 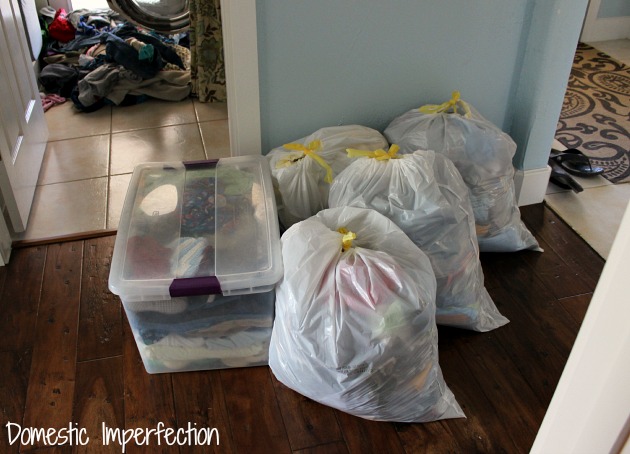 Then I cleaned up the yard a bit, and came up with a van full of stuff to take to big trash day in our neighborhood. I got five big items, which I’m counting it as five bags. I could have gotten more, but Adam and his truck were out-of-town that day. 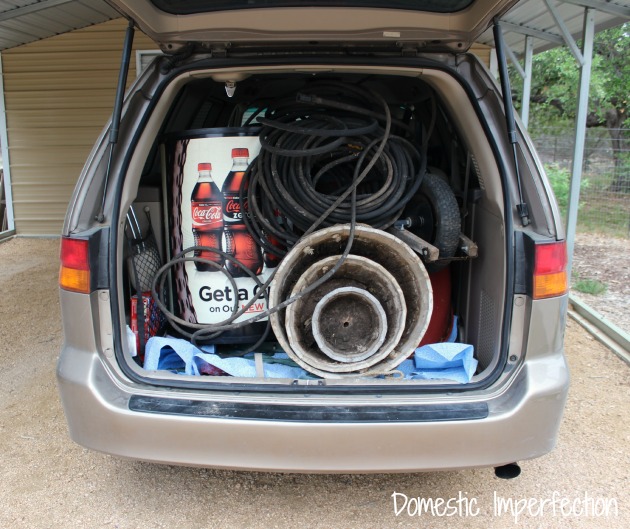 Then there is the furniture that I’ve decided to part with, for different reasons. A few of them are already gone, a few are for sale, and the rest are waiting to go to family members. Here is the stuff that is getting the ax… 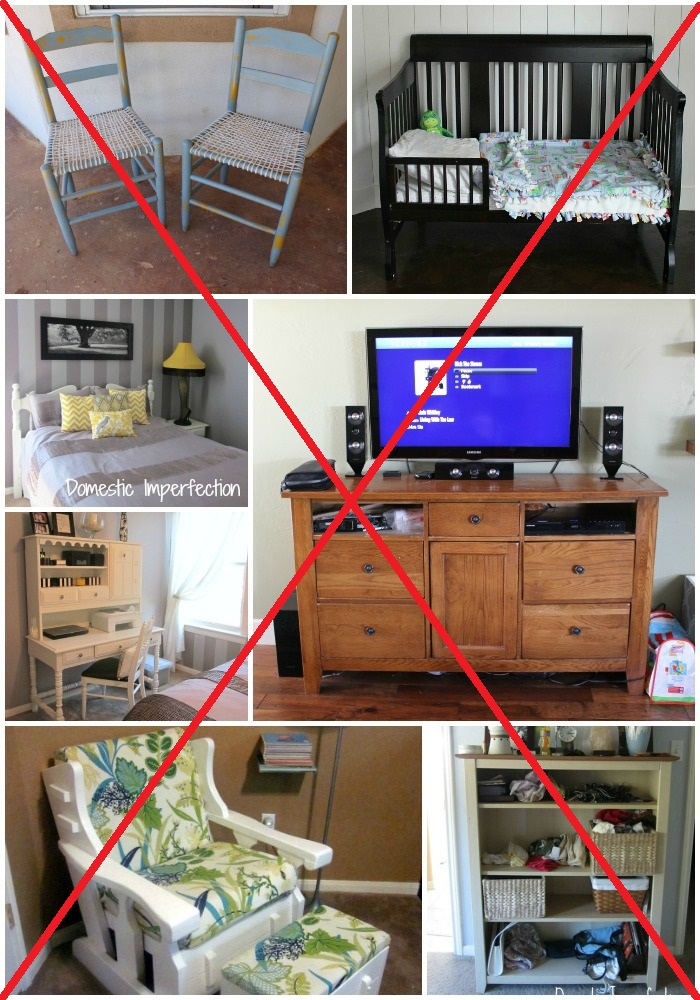 I’m slowly redoing the boy’s room so a lot of their stuff is going, and everything in the guest room is headed out as well. Even the bedding and the art on the walls. Not the leg lamp though…never the leg lamp. I also ditched two rugs, a few more random bags from around the house, and some decor items. Thank goodness for my sister-in-law in college, she taking most of it off my hands. Makes it easy.

I have a few areas I still need to take on (toys!) but overall I’m pretty happy with the amount of stuff I purged. My house still feels a bit chaotic though, since each of our three bedrooms are currently torn apart (more on that in my next post). So overall – if I count each big item as a bag – I got 47 bags. Not bad.