When we bought our house it had zero storage. No garage, no basement, an attic that isn’t really usable, and no extra closets. We needed a place to store lawn equipment, paint, and general homeowner stuff, so Adam’s parents offered us an old metal shed that was on their property. 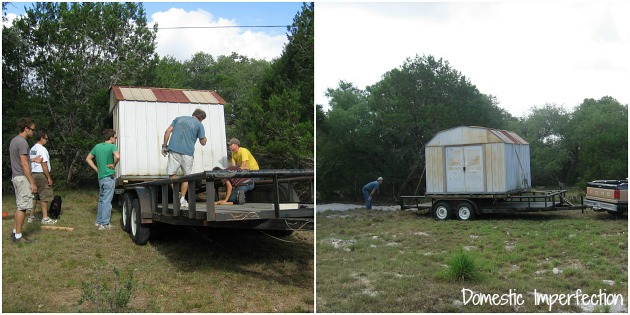 We put it on the back part of our lot, filled it with stuff, and promptly forgot about it. 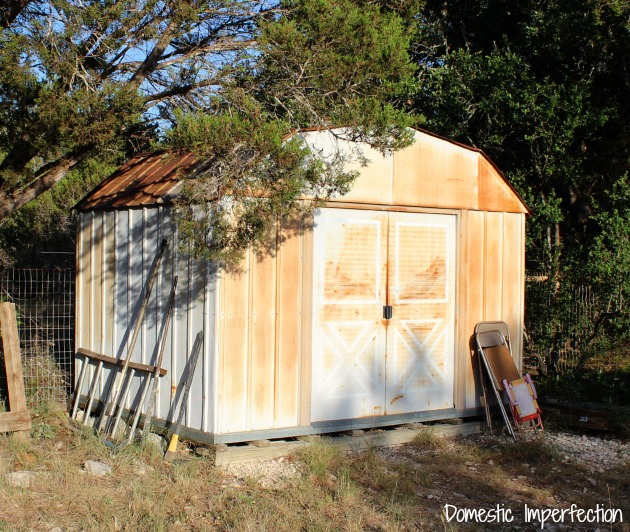 Or at least I forgot about it. My husband on the other hand thought it needed some TLC. He would casually say things like “if you want you could paint that shed.” And I would nod my head and say things like “yeah, maybe” all the while thinking to myself that there was no way he was going to talk me into painting that rusty old thing. But he kept hinting – for years – that he wanted me to paint it, and I kept dodging his subtle pleas with mumbles and side-eyes. About a year ago he got he hint and stopped asking.

Then last month 3M contacted me for a campaign they’re doing about outdoor painting projects.  3M is a great company to work with, so I racked my brain trying to think of something. I wanted to do a project that actually needed doing, not something like painting a pot or outdoor rug that I have no current use for. Finally I gave up and asked Adam if he had any ideas. He thought about it for about half a second, turned to me with a subtle smirk on his face and said “you could paint the shed”.

Dang it….he had me, and he knew it. That bastard outsmarted me. So, without further ado…. 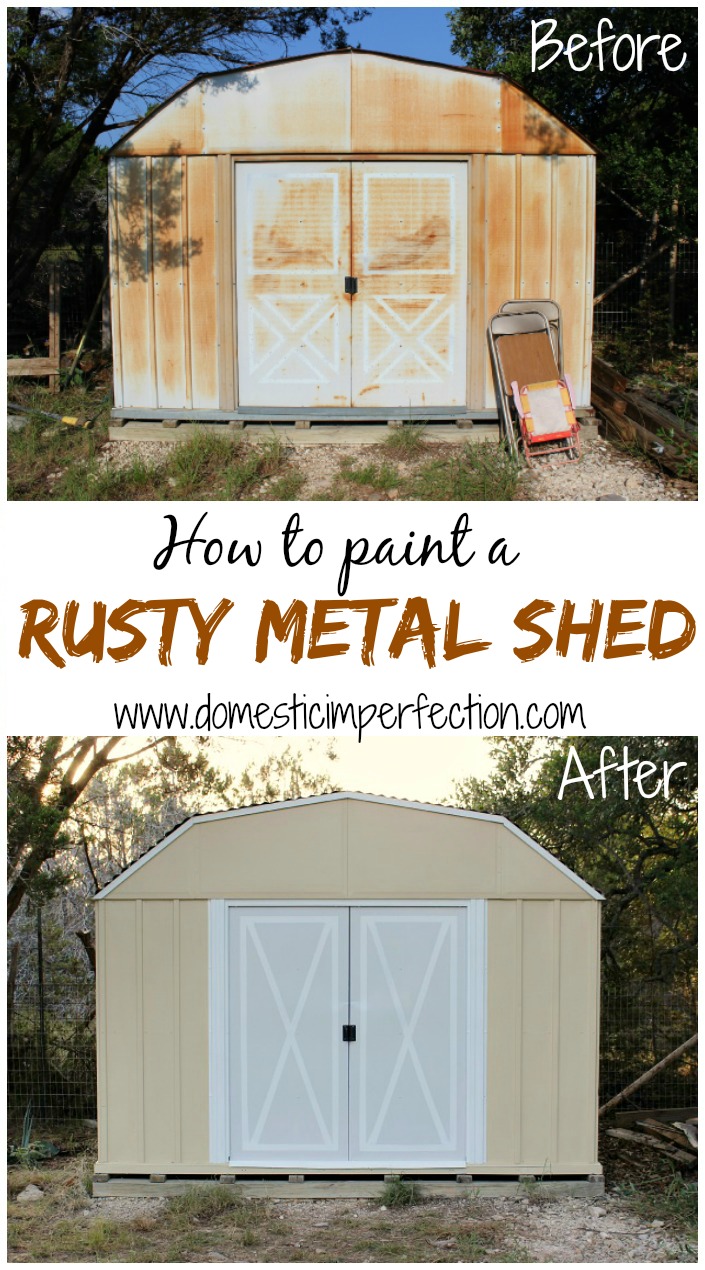 Now, the most important thing to remember when painting a rusty metal shed is NOT to do it in late July in South Texas. Just stay inside, enjoy your air conditioning, and wait till Fall.

The second most important thing is prepping the surface correctly before painting. I’ve never painted rusty metal before and Google doesn’t give you a clear-cut way of prepping, but rather gives you about 47 ways you could do it and tells you not to mess up. Since my shed was only lightly rusted I decided sanding it wasn’t necessary and chose to wash it with TSP instead. I had never used it before but I’ve heard people sing its praises so I figured I’d give it a go. 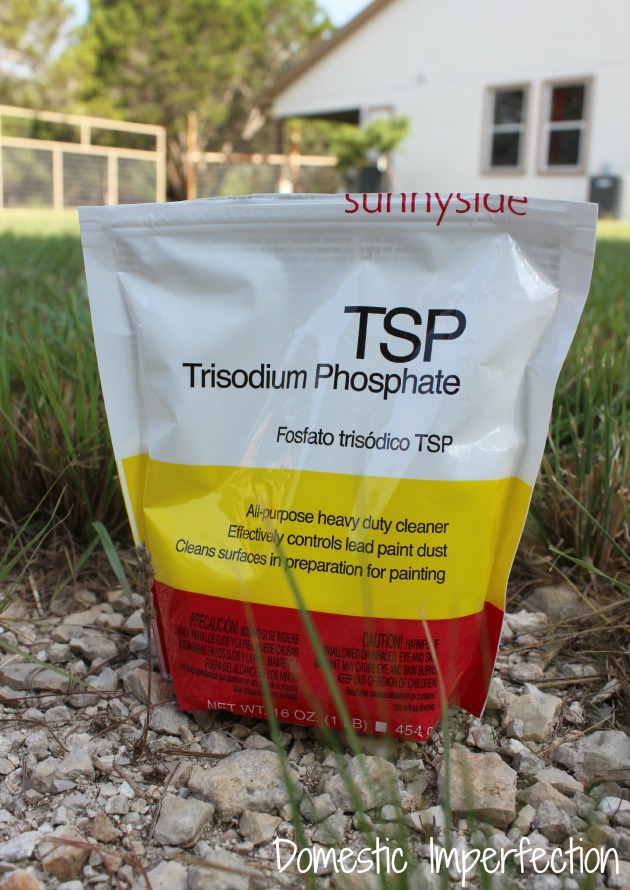 I’m now going to become one of those people that sings its praises, because the stuff is magic. MAGIC I tell you. It comes in powder form, you mix it with warm water, get to scrubbing, and the dirt and rust come pouring off. Literally. 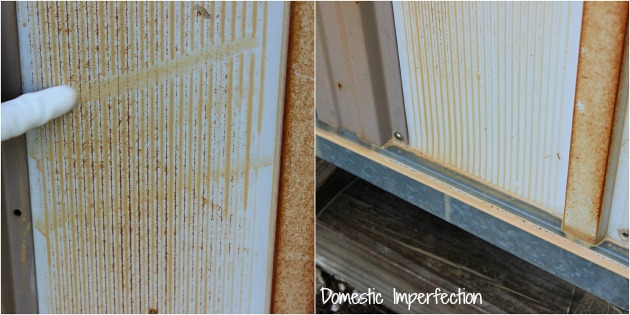 Here are some before and after pictures… 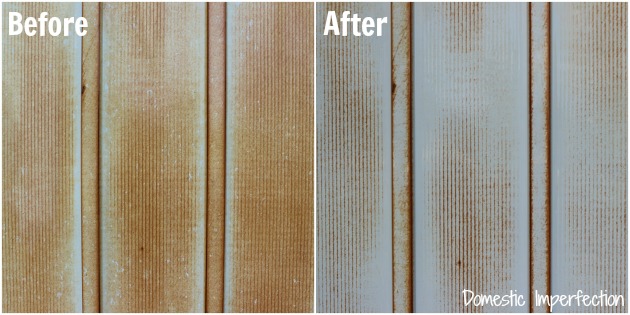 So much better already, right? I had other prep planned for the shed, but after cleaning it with TSP I decided that it was good to go.

Next up was to prime the shed, I used Behr® Premium Plus® Exterior Multi-Surface Primer and Sealer. 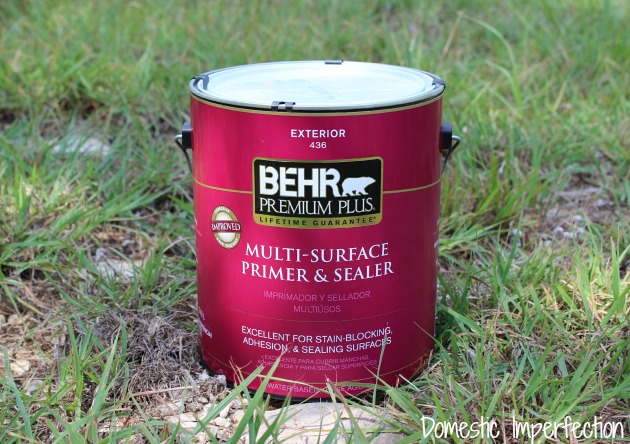 I also decided to bust out my paint sprayer. I had never used a paint sprayer before (so many firsts in this post!) and was hoping it would make painting the shed go really quickly. Also, my boys thought it was awesome. It looks like a gun and shoots paint…what’s not to like? 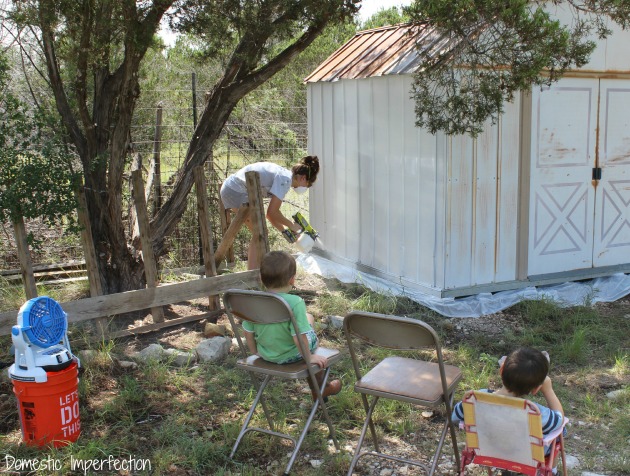 The paint sprayer was awesome. Seriously, it took me no time at all the paint the whole shed and the finish was smooth and beautiful. That being said, there is a learning curve. I had no idea how much you needed to thin the paint (spoiler alert, it’s a lot), and I spent a lot of time cleaning and unclogging the sprayer. 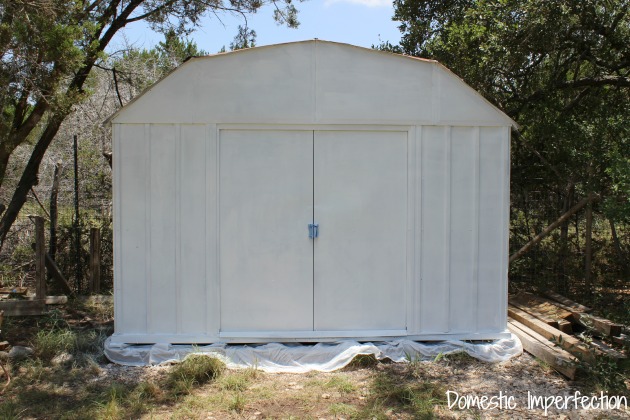 Next up was to prep the shed for paint. For this I used ScotchBlue™ Painter’s Tape for Exterior Surfaces and taped off the parts I wanted to keep white. 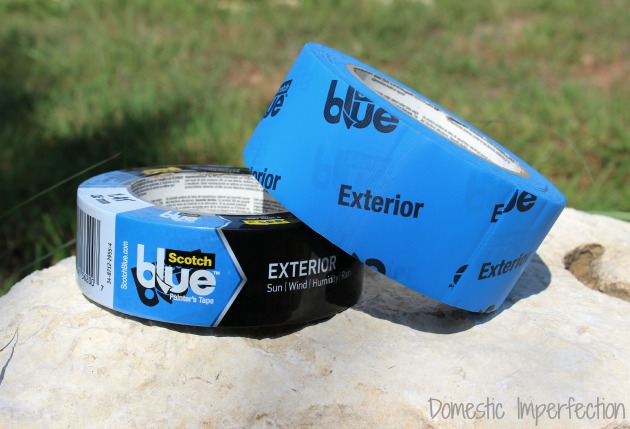 I used Behr® Marquee™ (in Oat Straw 740C-3) for painting the shed, which is meant for outdoor things that are going to get abused and ignored. 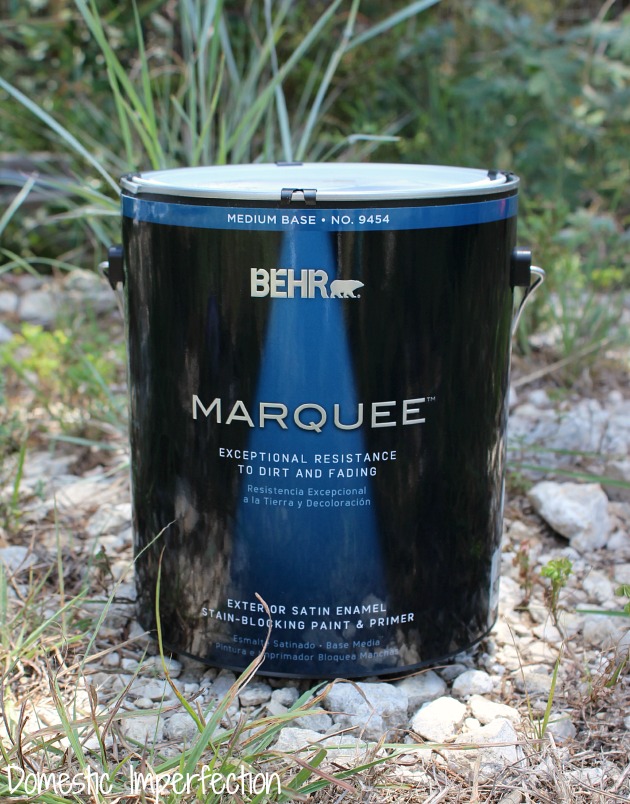 Then I got back to spraying.

By this point it was mid-day and was getting really hot. The kinda hot where you wish you were naked… but also that you were wearing ALL THE CLOTHES so that the burning rays of sun never touch your delicate skin. My peanut gallery of preschoolers had abandon me for dinosaur puzzles in the air conditioning. Smart boys. Not all that loyal, but smart nonetheless. 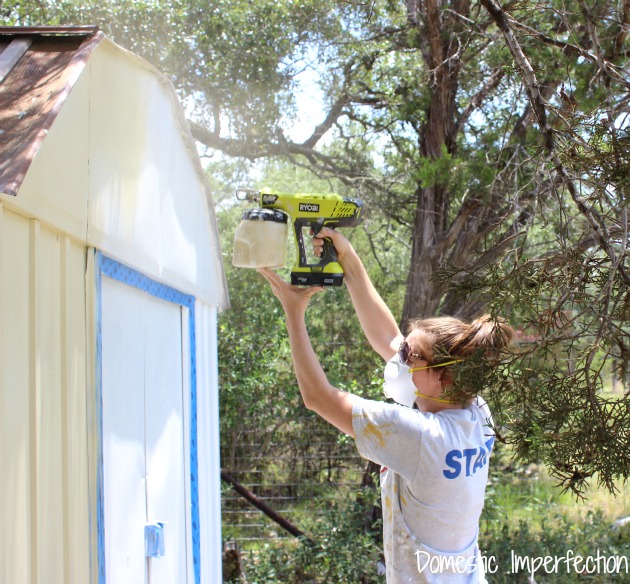 Oh, here’s another paint sprayer tip. Check to make sure that the paint container is locked on before you start spraying. Even if you think it’s good to go, double-check… you know, just in case. 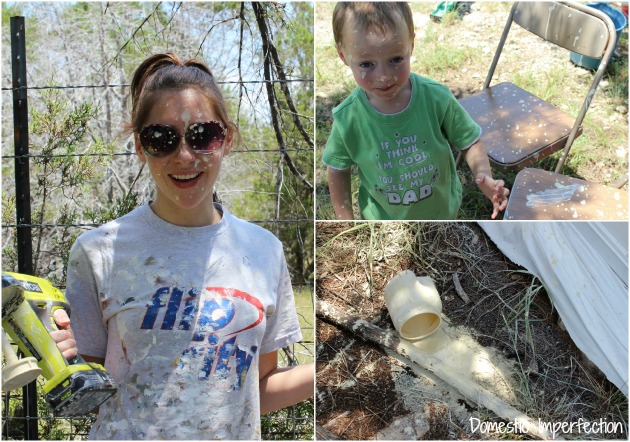 After that I moved my tape, grabbed my favorite paintbrush, and painted the trim (Marquee™ Ultra Pure White 1850) and the doors (Marquee™ Subtle Touch 790E-1). 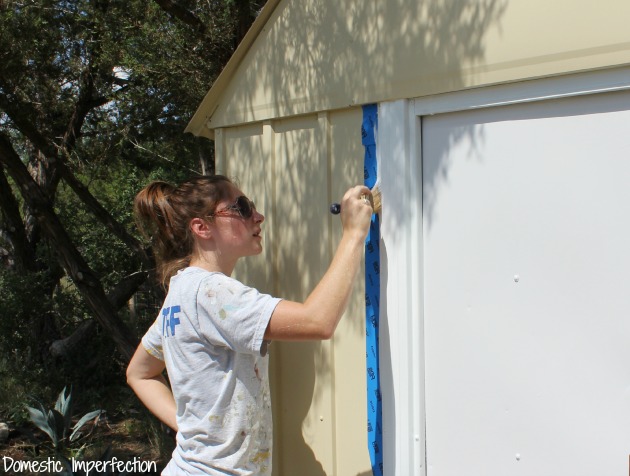 Then I called it a day, abandon the outdoor inferno, and took my sweaty, paint splattered self inside for a shower.

We weren’t finished yet though…oh no.

The next morning my husband got up before the sun to start working on the roof. The roof, you see, was really rusted…way more rusted than the rest of the shed. I had planned on just leaving it (or maybe painting it), but Adam decided it would be a good idea to replace it. “It will be easy” he said, “I’ll just buy some corrugated metal panels to replace it with.” Let’s just skip ahead to the part where I tell you this was NOT easy. As it turns out, roofs on metal sheds are quite structural. In other words, when you remove the roof the walls just kind of flop around and infuriate your husband. 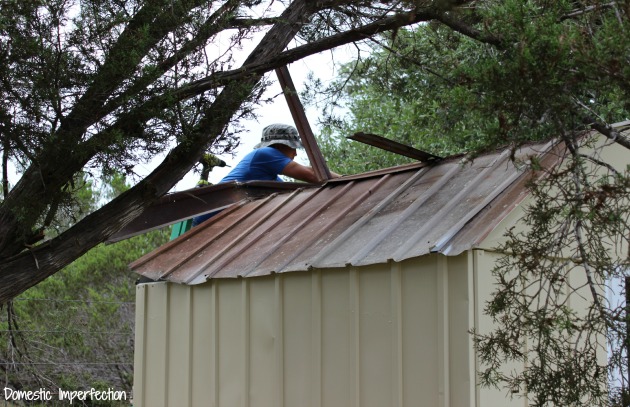 So yeah, the roof replacement turned my laid back husband into an angry cursing machine. And while I felt bad that it wasn’t going well, I was also thanking Jesus that replacing the roof was 100% his idea and not something I asked him to do. 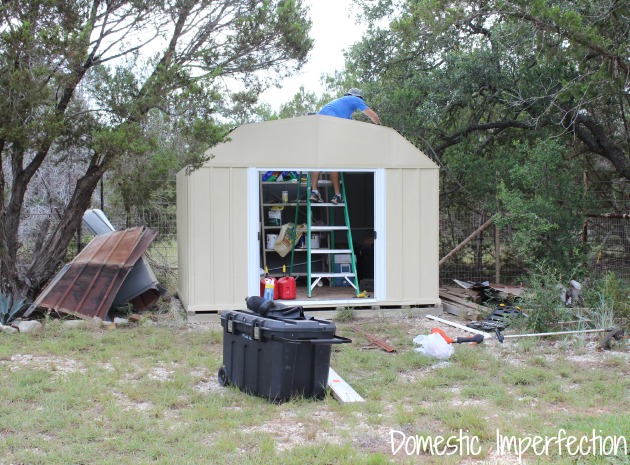 Eventually he got it on though, and we’re not going to have to torch the shed like he had been claiming was our only option.

Okay, last step for me to add a little barn flair back onto the shed doors. For this I grabbed my trusty ScotchBlue™ Painter’s Tape and an X-acto® knife. I eyeballed the design, taping off the X shape (door on the right) and then cutting out the extra tape (door on the left). 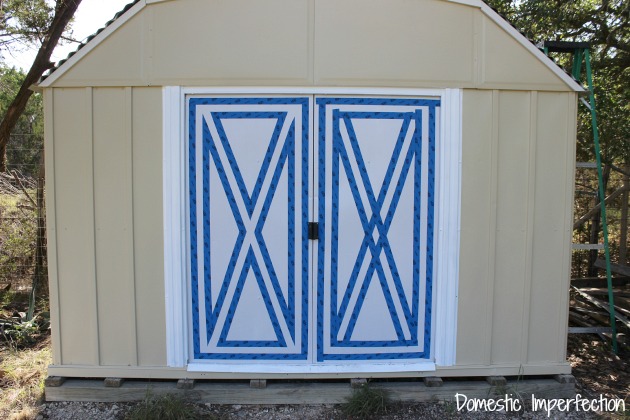 Then I painted the sections between the tape… 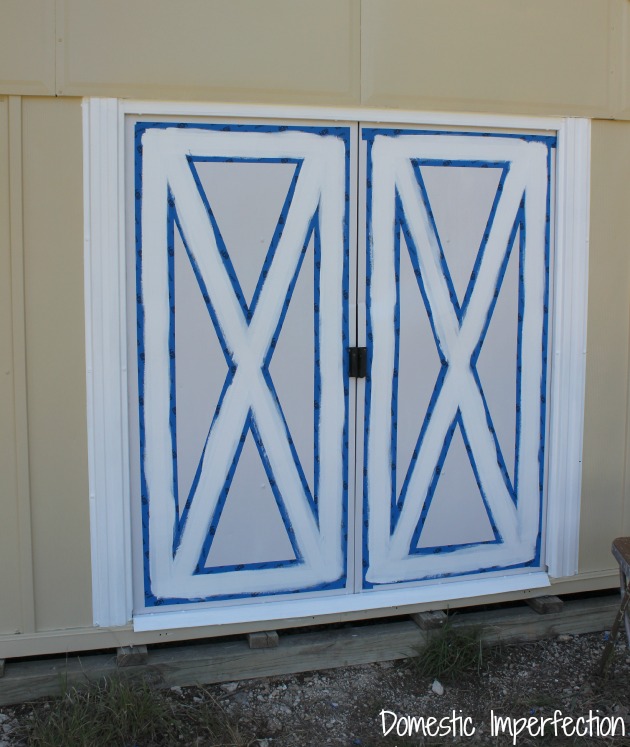 And before the paint dry (very important!) I pulled all the tape off and admired my work. 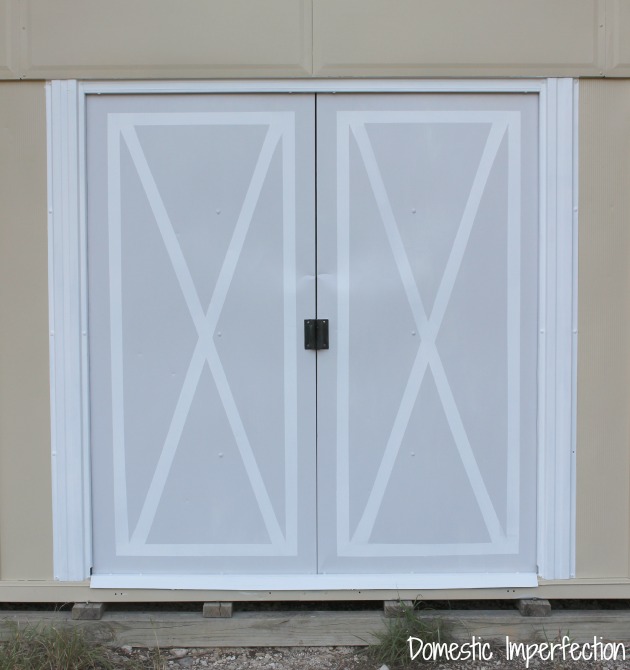 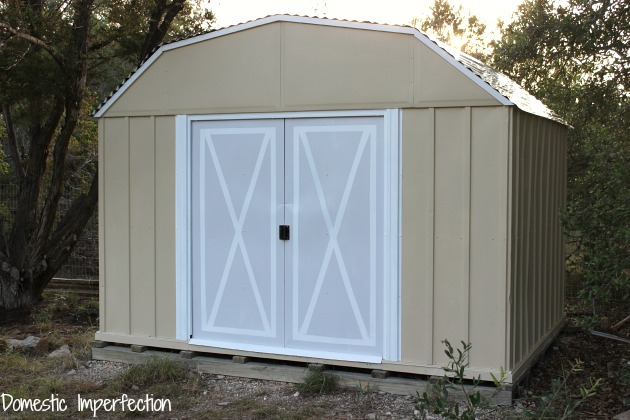 Now THAT is a painted metal shed. That is what a completed project looks like after years of avoidance. I have to say, it looks good…like really good. 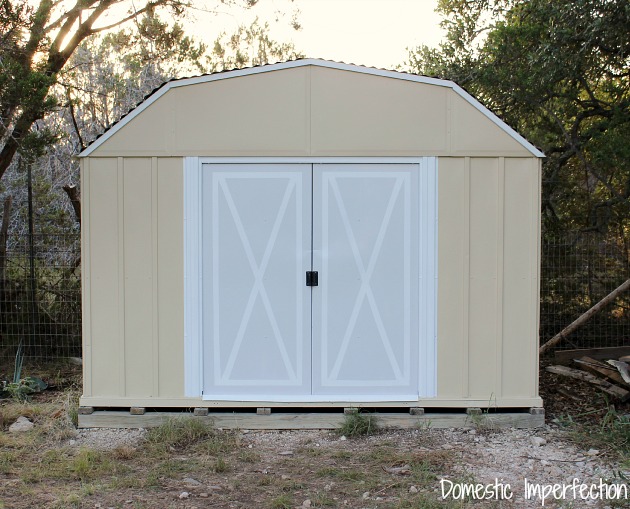 Adam asked me very specifically to get a glamor shot of the roof, so here it is…. 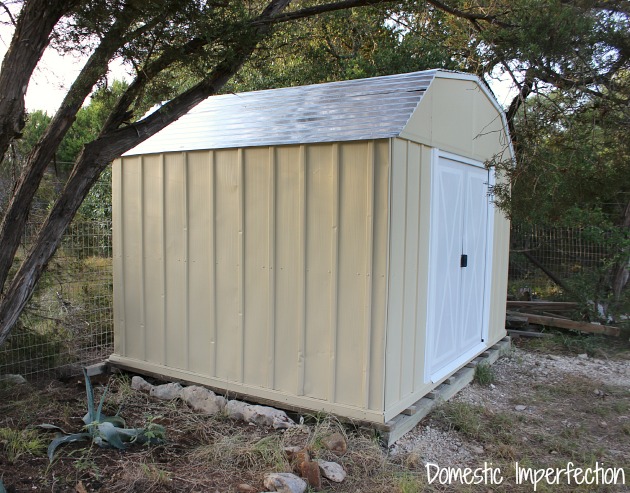 One last side by side, because that’s the best part of any project.

Update – I painted this shed in 2014, and it legit held up great. We we sold the house in 2016 it looked exactly the same as it did in the after pictures. It’s now 2022 and I drove by our old hose the other day, and this shed is still there and still looking pretty damn good.