This is a Sponsored post written by me on behalf of Flood® Wood Care for SocialSpark. All opinions are 100% mine.

Those of you looking for more progress on our bathroom remodel are going to be disappointed. I’m not that far along yet…  how about a playset reveal instead? 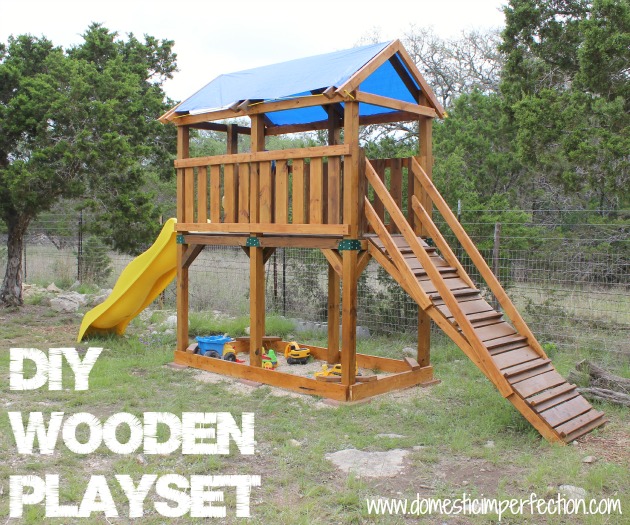 As you may or may not know, we had been talking about building/buying the boys a playset for a while, but we talk about doing a lot of stuff that never actually happens. This one was meant to be though….a friend recently bought a house, and in the backyard there was an old playset. He had no need for it, so he asked Adam if we wanted it for the boys. We did. So Adam took a couple of trips over to his house, dismantled it, and brought home all the pieces. 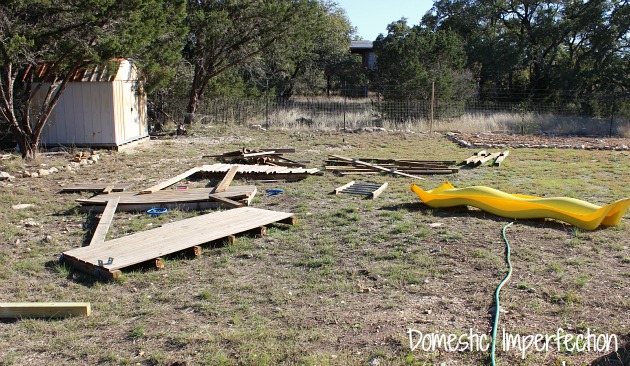 And there they sat, littering our yard for about two months. We still played on it though, I made a series of balance beams with the planks and  the boys are now balance experts…or something like that.

Here’s the funny thing about all those pieces…Adam didn’t use most of it to build the playset. As in, the playset is completely built and 60% of the stuff from the previous picture is still sitting in my yard.

So here is my “tutorial” – I put that is quotes because there aren’t building plans or anything. It’s just pictures of my husband and family working and me narrating, which may or may not be helpful.

The first step was to create a level area to build the fort. 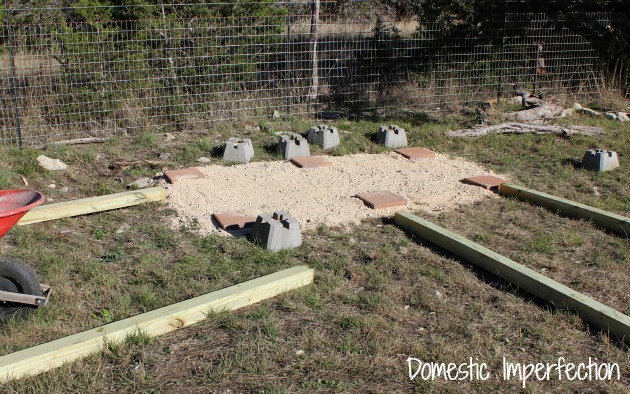 The playset came with the concrete pillars, but for some reason Adam thought it would be easier/sturdier to use pavers instead. And yes, the concrete blocks are still sitting in our yard :)

The next step is to erect the frame using 4×4’s. 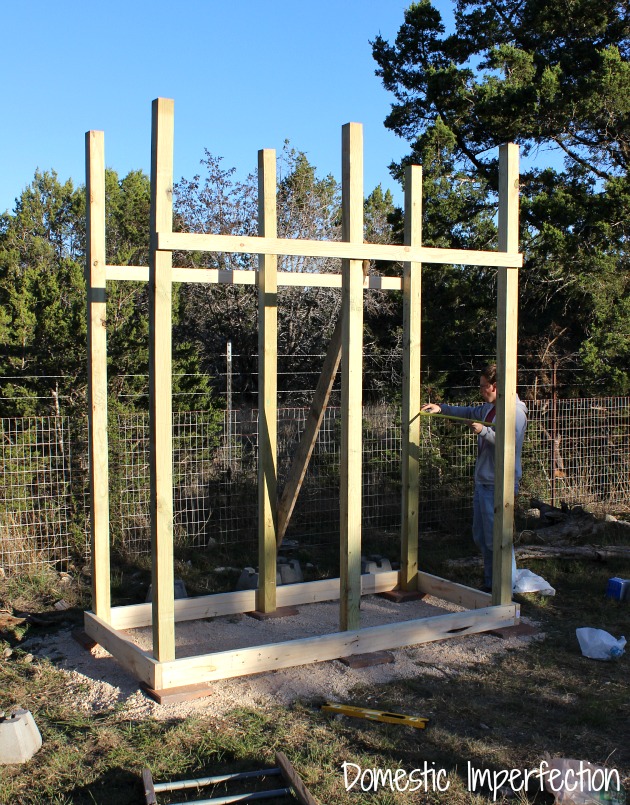 It’s really important to keep the frame completely square at each step. In all the pictures you’re going to notice extra random pieces of wood holding it together, they were constantly measuring and leveling and moving those pieces around in order to keep it from being off.

Next up was adding a frame for the second story. 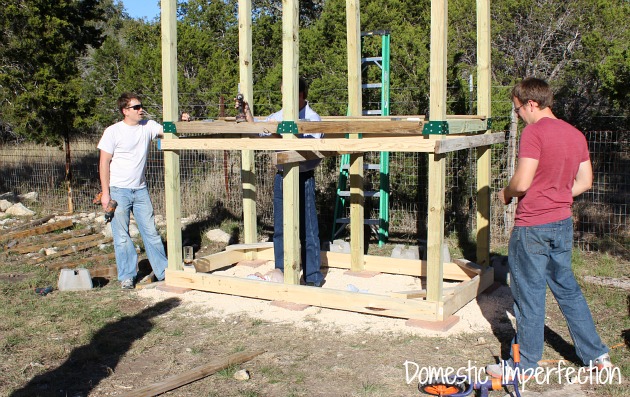 Then they added the decking… 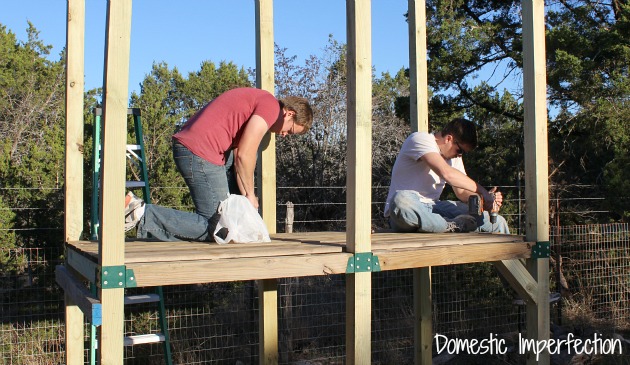 Railings…slide….ramp… (sooo not a tutorial, haha)… 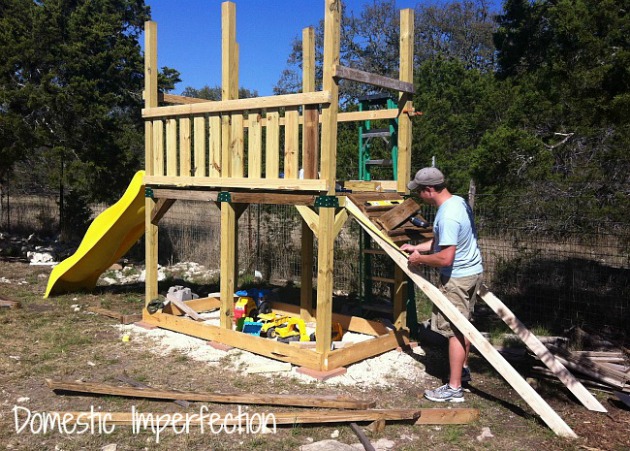 Then they moved onto the roof (this is Adam and his brother Taylor, BTW, and each one of these steps happened on a different day…or even in a different month). 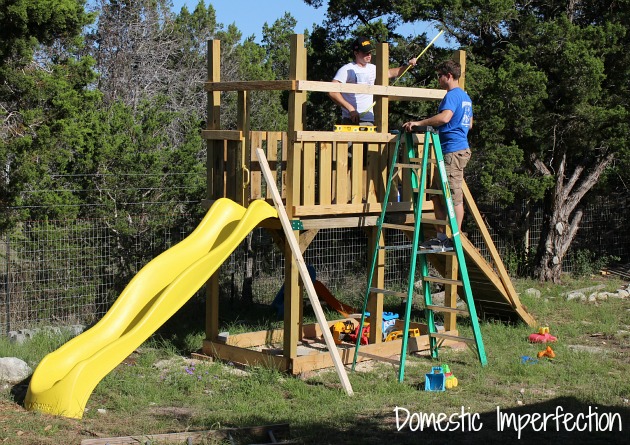 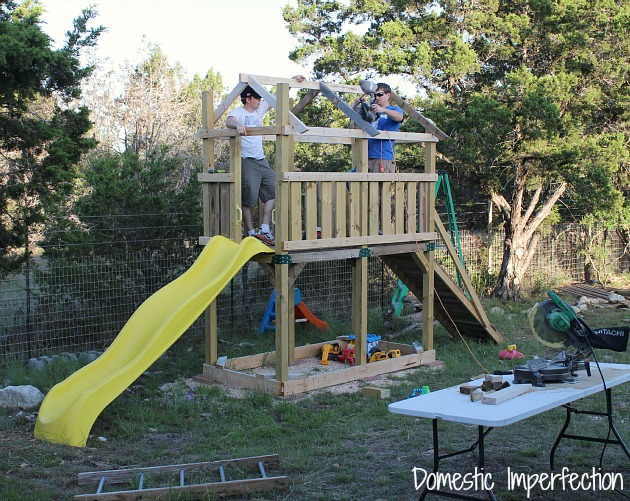 And then the project was handed over to me for staining and sealing.  We already have a big jug of Thompson’s water seal (leftover from our built-in bench), but it’s clear. I wanted the finish to have some color, BUT doing two coats was not going to happen. That’s a lot of nooks and crannies in case you hadn’t noticed. Anyway, we found a product called Flood® Wood Care at Home Depot that is a stain and sealer in one, made just for decks and fences and whatnot. Perfect. 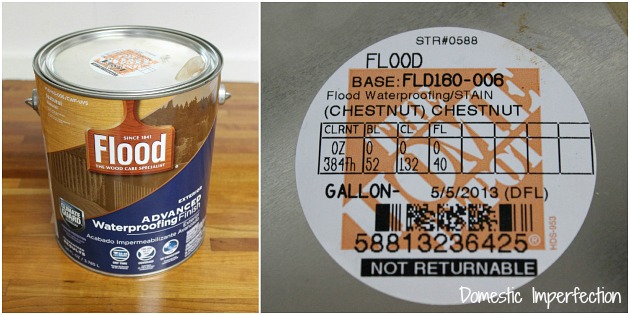 Flood has a very detailed Staining Made Simple guide where you can enter all the details about your project and it will tell you exactly which one of their products will give you the result you’re looking for. We ended up with a transparent gallon in Chestnut. It was about $25 and one gallon did the whole playset (I used it all though). 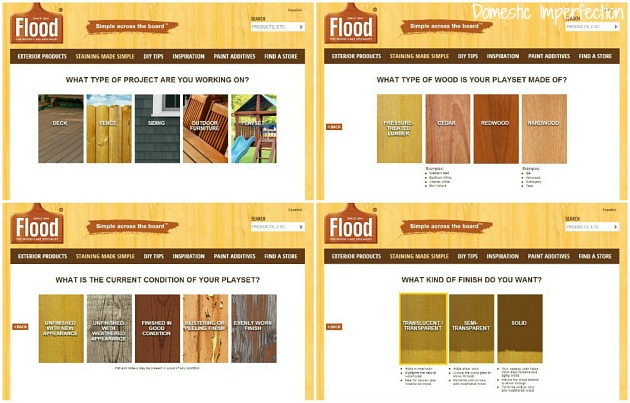 (Also, going on right now is the Flood Better Backyard Sweepstakes where you can enter to win a $1,500 gift card or one of 12 $10 gift cards given away daily. To enter GO HERE , “like” Flood® Wood Care on facebook and fill out  short questionnaire. Contest closes May 17th.)

Here is the fort about halfway finished. It felt too orange as I was painting it, but when I stepped back it looked exactly like one of those playset “kits” you buy with the pretty wood. 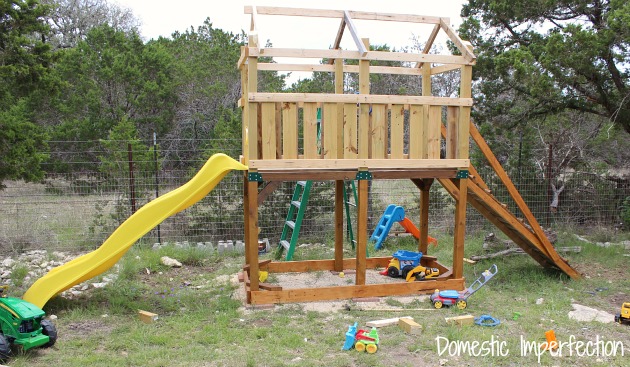 On a side note…remember back before you had kids and you SWORE you would never be one of those trashy people with plastic toys littering their yard? Famous last words, right?

The Flood worked great, although you can still tell the difference between the new wood and the old wood. Can’t win ’em all, I guess…we did buy transparent. 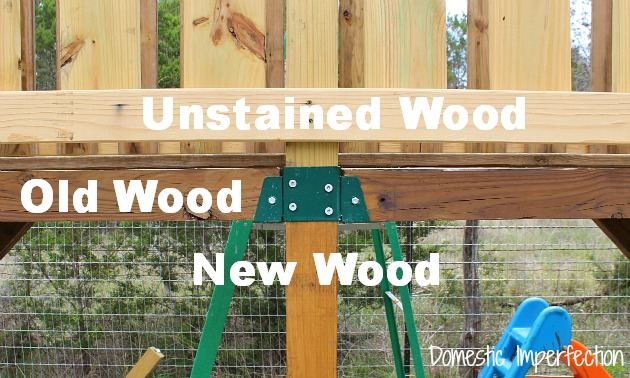 Here it is all finished! It think it looks awesome, Adam and Taylor did  a great job and it feels so nice to have it done after nearly five months of  being an in-progress toddler death trap. 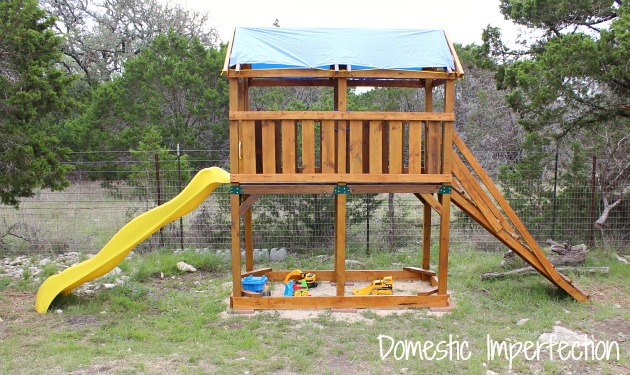 I’m not going to lie though, it took for-freakin-ever to paint (stain, whatever). I did it all yesterday and it took me five or six hours…I’m  glad I didn’t have to do a stain and sealer separate or more than one coat of the flood.

The roof is just a cheap 5X8 tarp, it was about $6 at Home Depot. Adam strung a rope through the overhang on the eaves and we used zip ties to make it tight. Easy, and when the tarp gets old and nasty it will be no big deal to replace. 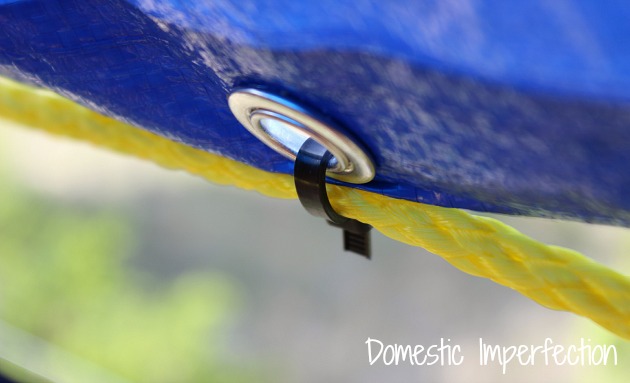 Here is the ramp, even my droopy-diapered 18 month old has no problem climbing it. We opted for a ramp over a ladder because it felt safer for tots, I didn’t like the idea of gaping holes without something below them. 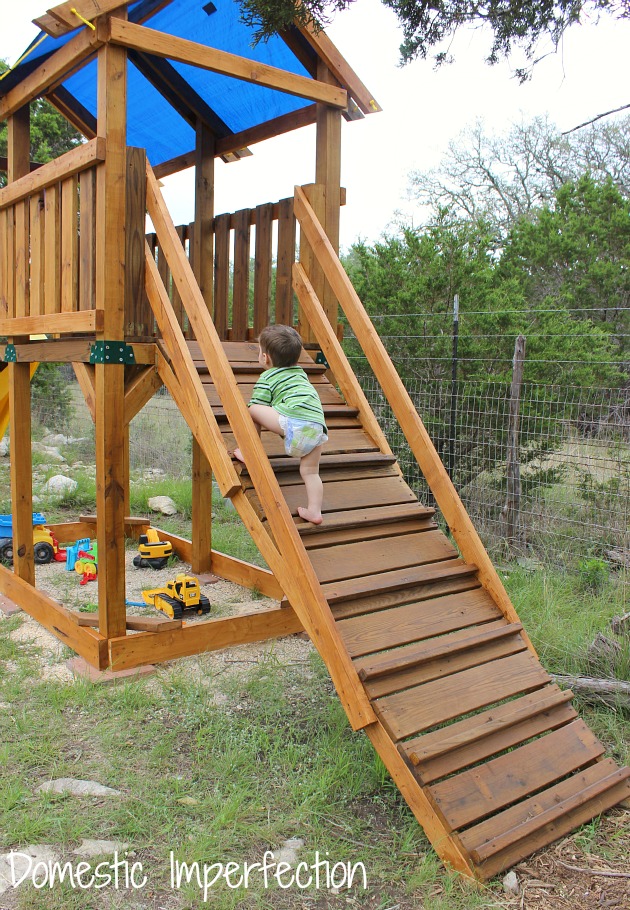 One more from the other side… 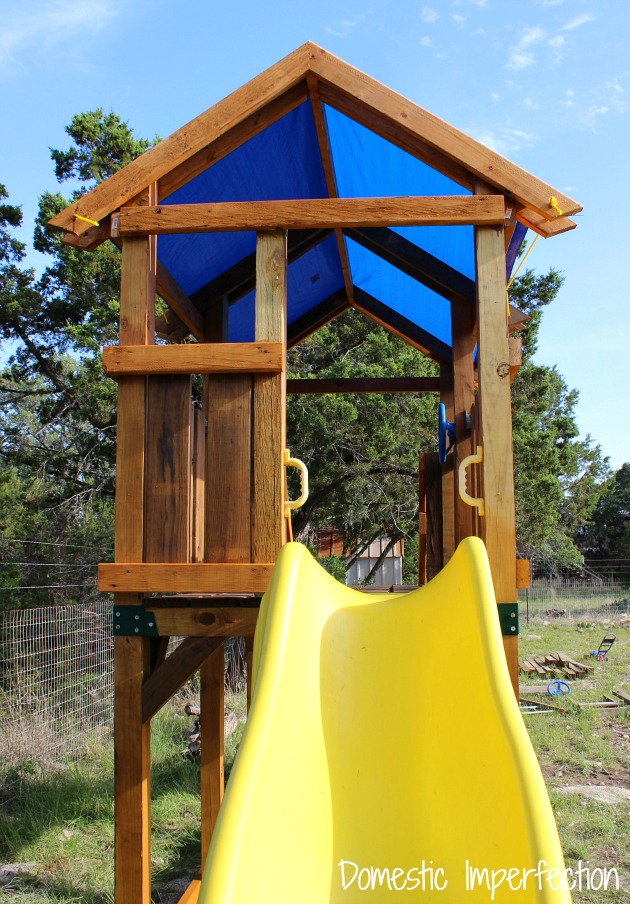 ARGH…I just noticed that I didn’t paint the outside of those 4X4. Dang it, so many different angles on this thing!

We’re not actually 100% done, we still have to complete the most important part…the sandbox. My kids LOVE sand. Love it. They love it so much that they play in this part everyday, even though it’s nothing more than a bit of compacted caliche. It’s going to blow their minds when we fill it with sand. 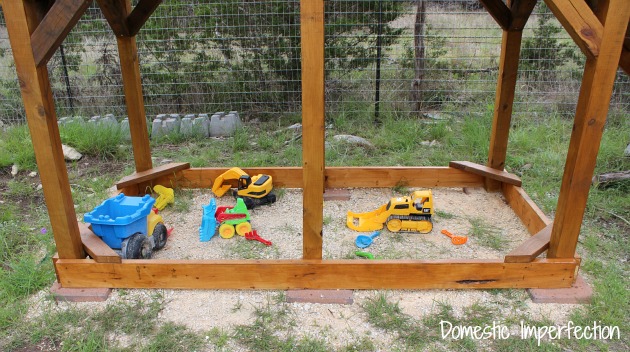 I almost forget the best part…here is my view from my “blogging spot” on the couch. 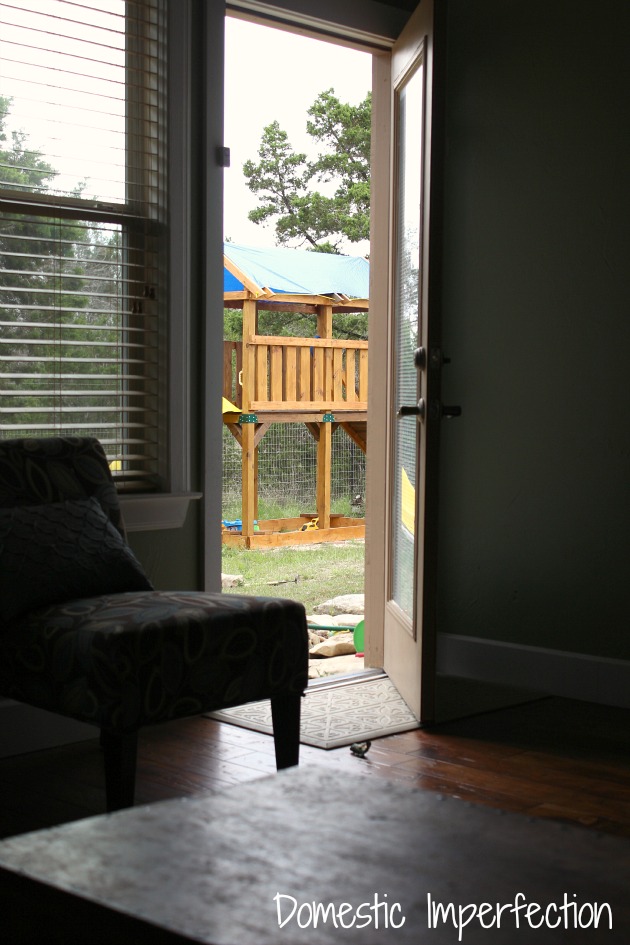 I can see right out the door and into the sandbox. My hope is that they will spend at least three hours a day happily sandboxing away while I get my work done/watch them play contently/yell at them not to throw sand at each other. It’s going to be glorious. Right? Riiiiight?

Now for the boring legal mumbo jumbo for the Flood contest…

NO PURCHASE NECESSARY. Legal residents of the 50 United States of America and (D.C.) 18 years and older. Ends 5/17/2013. To enter and for Official Rules, including odds, and prize descriptions visit www.facebook.com/flood. Void in Puerto Rico and where restricted or prohibited. This Sweepstakes is in no way sponsored, endorsed or administered by, or associated with Facebook. You understand that you are providing your information to Sponsor and not to Facebook.

2.8Kshares
« 15 Ways to Give Your Furniture New Life
April Ramblings »