There are so many decisions you have to make when building a house. Lots of them are small, quick decisions…and some of them are big ‘ol monster decisions.

Choosing rock is a big ‘ol monster decision. Rock is a big investment, and you can’t change it. I feel like exterior paint was a big decision, but the fact it is, it’s just paint. If I had decided to paint my house purple and a year later I was like “wow, that purple paint is really obnoxious”, then you just paint it again. Rock though, it is what it is. If you bomb your rock selection, that’s it. You hate it forever.

Adam and I have spent quite a bit of time looking at rock. We take pictures of things we see while we’re out and about, and collect photos online. We both like a lighter, rustic, fairly monotone look, and want rock that looks like it’s been there for a hundred years. We also both love extremely heavy mortar, which is called “German smear”.

So after visiting a couple of stone suppliers we had three samples delivered. 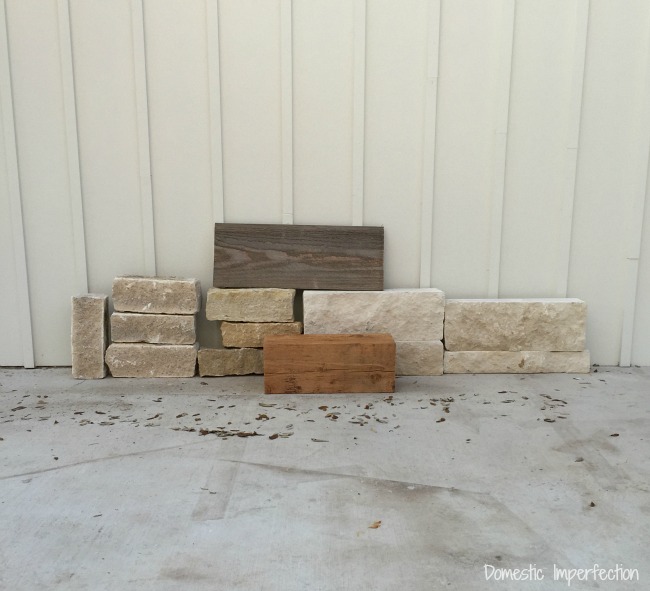 .
Adam and I stood there looking at them, and I started to second guess everything. The first sample (called rattlesnake chop) was too pink, the second sample (called Sisterdale top rock) was too orange/yellow, and the third sample (cream limestone) was too light, and was afraid it would look washed out against the white siding. If we were going to pick a cream stone I probably should have gone with Alabaster (brighter white) paint instead of Shoji White, that way they would stand out against each other better. And if we get cream, then the whole house will be white except for the barn wood bump out, which will look horribly out of place. Except for the cedar poles, which are super orange. Why are they so orange? And then I looked online and all the white farmhouses I saw had darker gray metal roofs, not the galvanized silver one we do. Now along with our washed out white house we have a too light roof, plus the horrid orange poles and sore thumb of random dark barn wood. Good grief, I’ve designed the ugliest house imaginable and spent all my money doing it.
.

This is how my brain works, y’all. It’s like “If You Give a Mouse a Cookie”, but house ruining style.

Okay, so back to reality…my house was not ruined. I had three kinds of rock. The rattlesnake chop was too pink. Gone. The Sisterdale top rock was a bit yellow, but I’ve seen it in real life and it looks really good. The cream might look washed out, but it might not. So we had the rock guys put up samples of the Sisterdale and cream. 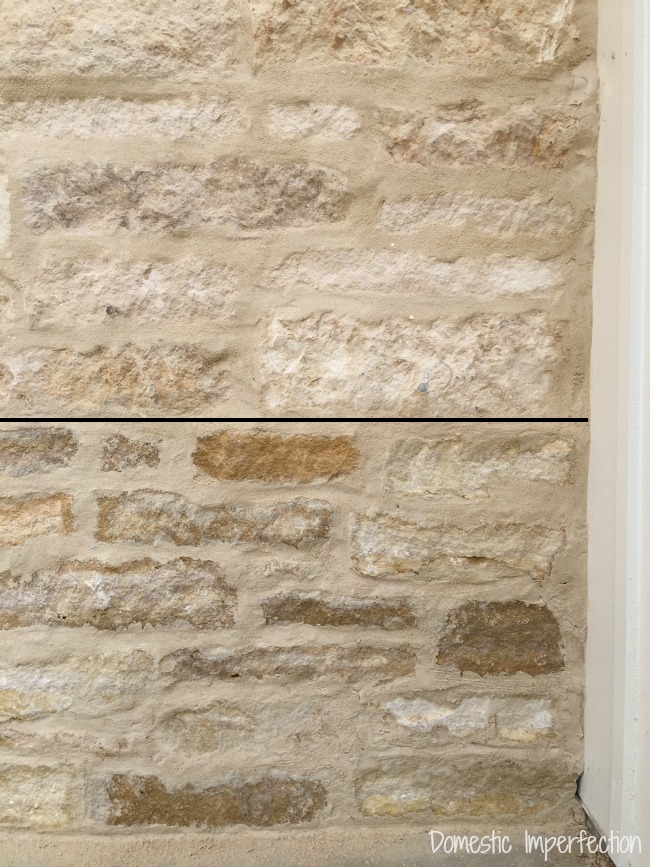 After it was up I went to go check it out, and my first thought was one of relief…they both looked great and not washed out at all. We really could’t go wrong with either. 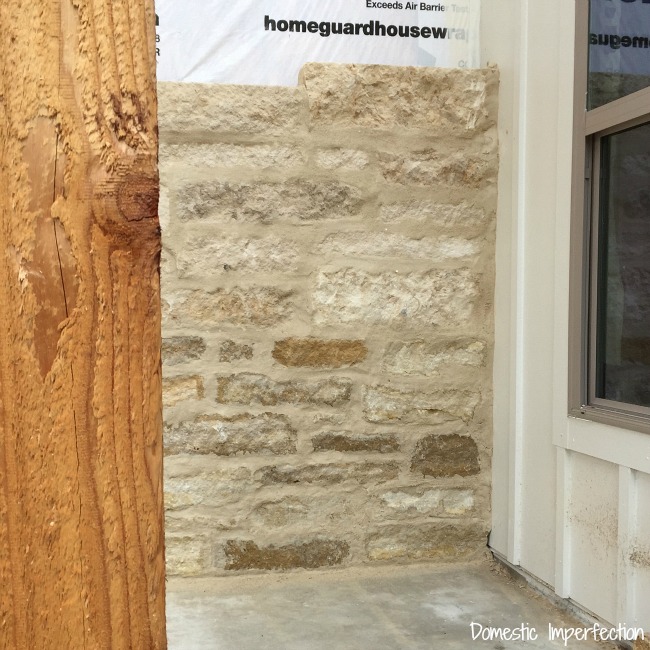 But we still had to choose. Adam and I stared at them for a long time, comparing them to the other things on the exterior… siding, barn wood, cedar poles, and window trim color. Then I said, “They both look great, but I have a favorite.” and he said “Me too…on the count of three lets say which one we prefer.” So he counts down and I say “top” and be says “bottom”.

Dang…we were so close to being totally in sync and getting another decision in the books. “Now what?” I asked, and he said “It’s a good thing I have a wife that likes to decorate and design things. Enjoy your decision.”

Ack…I love him and I hate him. 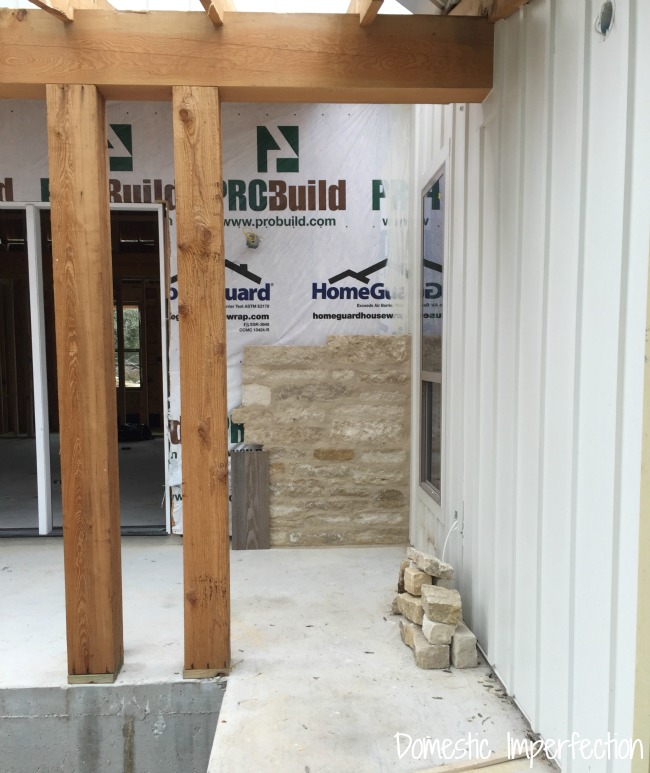 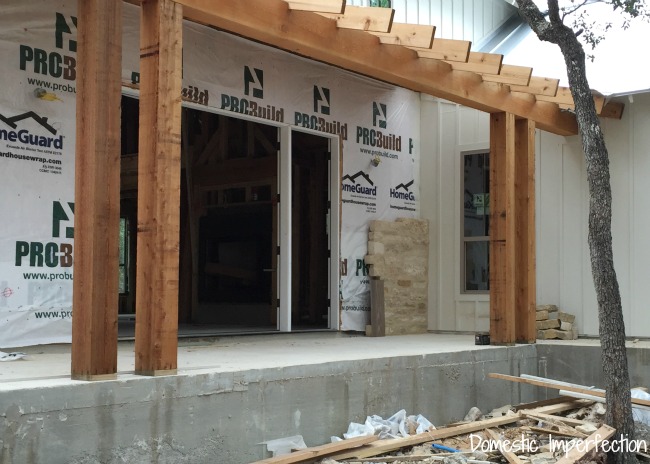 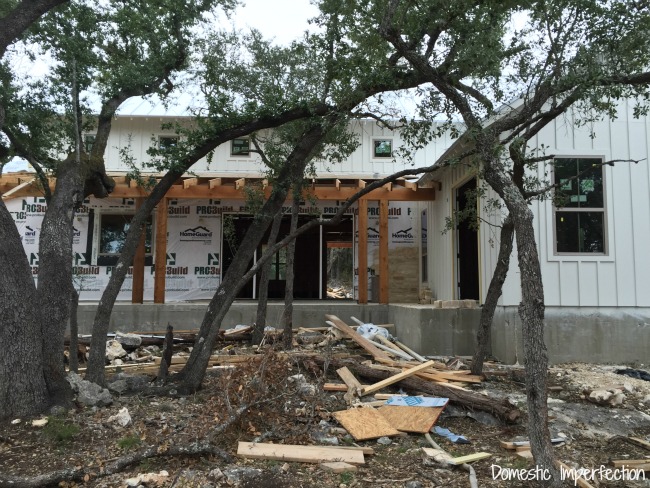 I stared in the sunshine and in the shade. I polled family, friends and Instagram (which was a 50% split). I stared at it for days. I looked at rock on houses in real life and houses on Houzz. I went back and forth, and finally decided to go with the bottom sample but pull out the random orange ones. I liked the way the bottom looked more rustic, but the orange ones scared me…I don’t want a polka-dotted house. Plus then I’d score some points with the hubby for choosing his favorite.

But, if we pull he orange out of the bottom sample it’s basically the top sample. And the top sample would be roughly $1,000 cheaper. That isn’t a ton of money in the scope of things and I wasn’t going to let cost make the decision for me…but still, it’s money saved.

So I chose the top sample, the cream limestone. 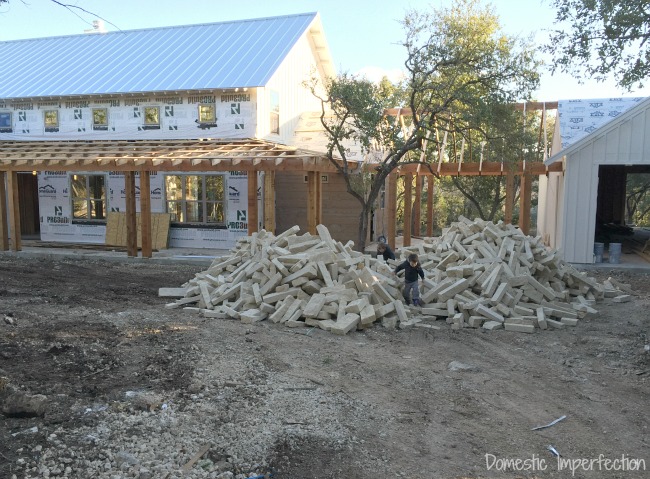 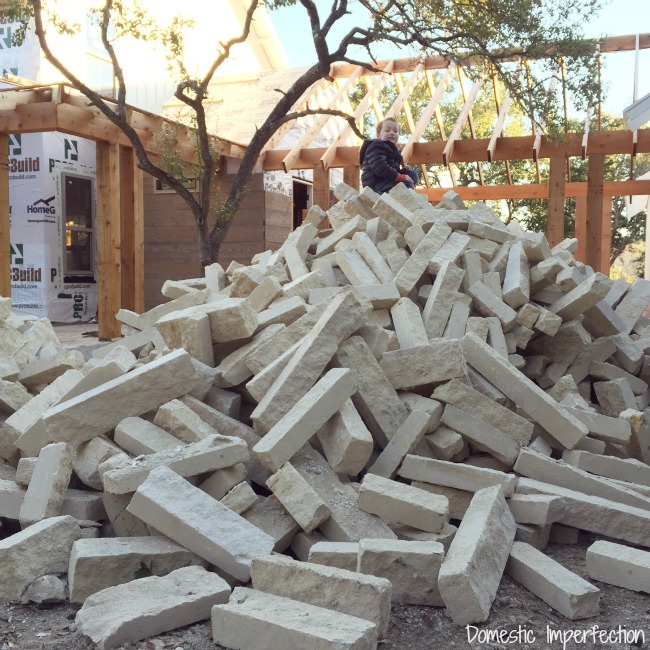 Either way, it goes up this week!

Also, on a completely unrelated note, I need you to help me settle a dispute between Adam and I.  Adam was proofreading this post and when he got the part about “If You Give a Mouse a Cookie” he didn’t get the reference at all. I was like “The children’s book…you know…where one small thing snowballs into another, and another, until things are completely out of hand? It has a ton of spin-offs, like if you give a moose a muffin, or if you give a pig a pancake”. Blank stares. Man, you think you know a person….

Anyway, I was under the impression that pretty much everyone was familiar with this book. He says it’s an obscure book that no one has ever heard of.

So, did you get my “If You Give a Mouse a Cookie” reference?