1.9Kshares
For the longest time now I have wanted to change out the boring glass fixtures on our ceiling fans. Not because they’re ugly, just because they’re…regular. Not interesting. In this house, things that are totally functional and not ugly obviously need to be changed.
So here they are, in all their normalcy: 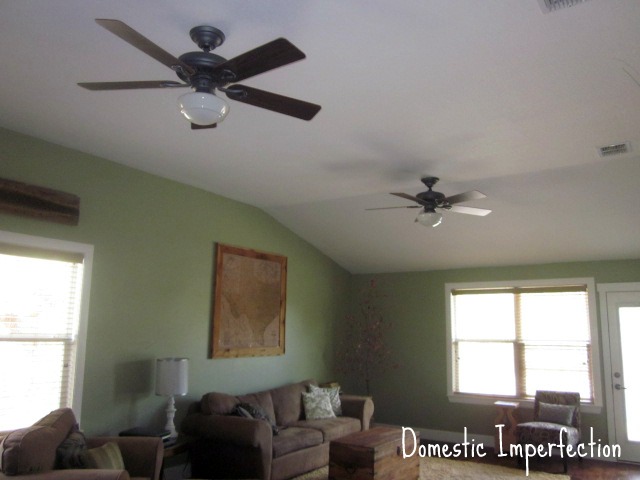 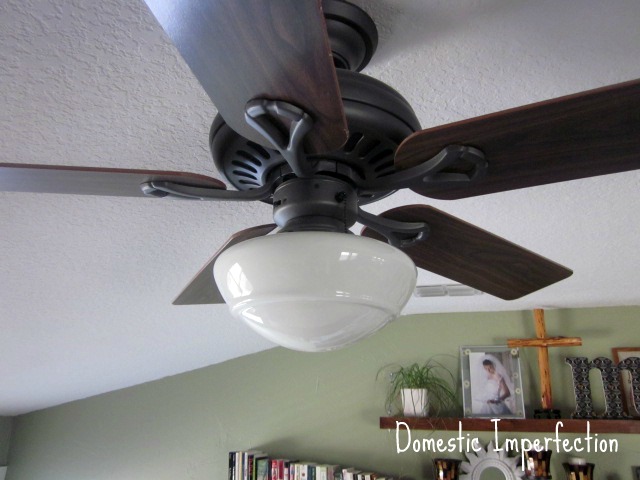 .
Now in order to put a lampshade on the ceiling fan I needed a very special lampshade. They had to have and uno attachment instead of the regular spider attachment (there’s a picture below, cause I know you probably have no idea what this means) and had to be a perfect drum shade. The reason for the perfect drum is that to install it on your fan you have to turn it upside down, and I didn’t want some funky inverted lampshade. Oh, and they had to be fairly small, I didn’t want them taking over the fan.
I (casually) looked for months to no avail. Then one day I ran across these lamps at Target for $9 a pop. They were on clearance AND there were two – lucky me! 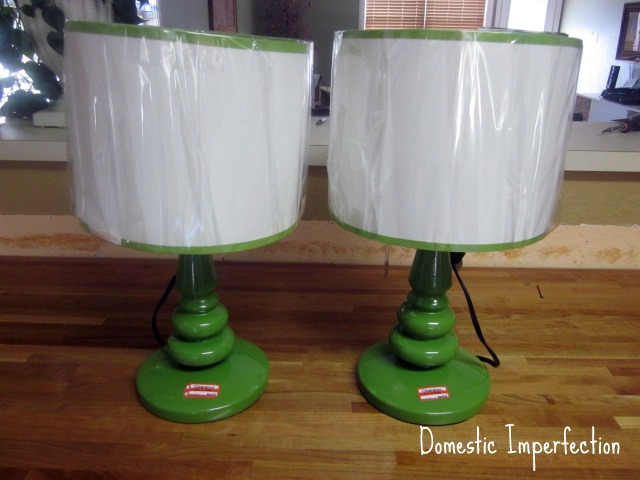 .
Here is the uno attachment – I’m already holding it upside down, it goes on the lamp the other way. 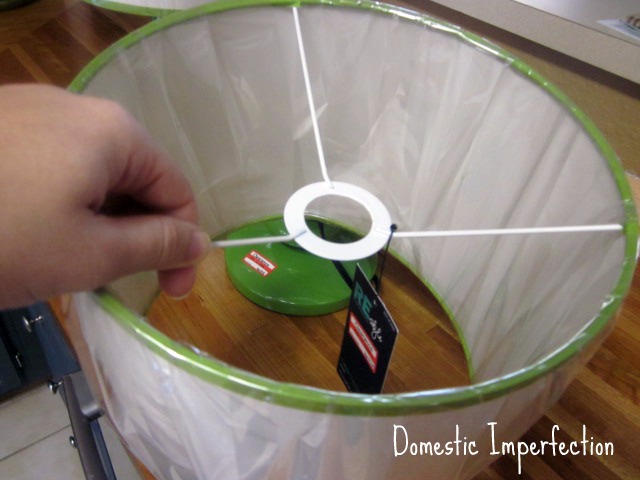 .
Now you know I couldn’t just take these lampshade and hang them up. No no, I had to personalize them.
Step one was to rip off the existing trim. This was disturbingly easy. 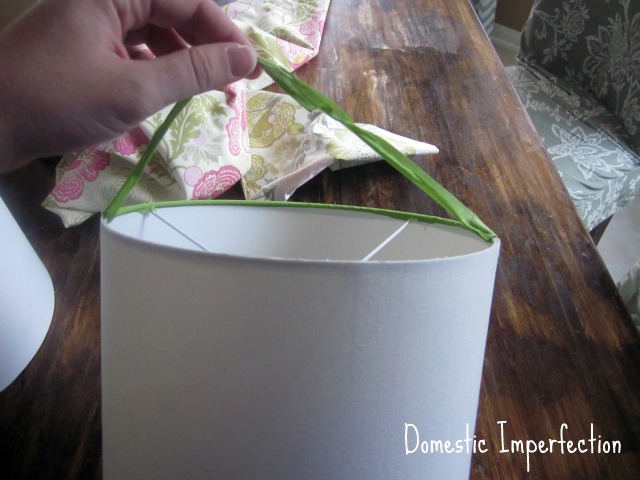 .
Next I cut out a piece of fabric to fit around the lampshade. 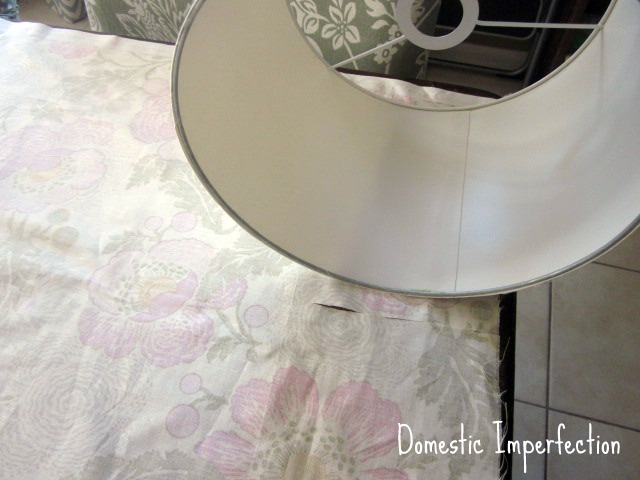 .
Normally you would attach the fabric to the lampshade by using a spray adhesive. I however didn’t have any, and I wasn’t going to run to the store to get some. Running to the store around here consists of an hour round trip of driving…no thank you. So I improvised and decided to use watered down fabric glue and apply it to the lampshade with a brush. 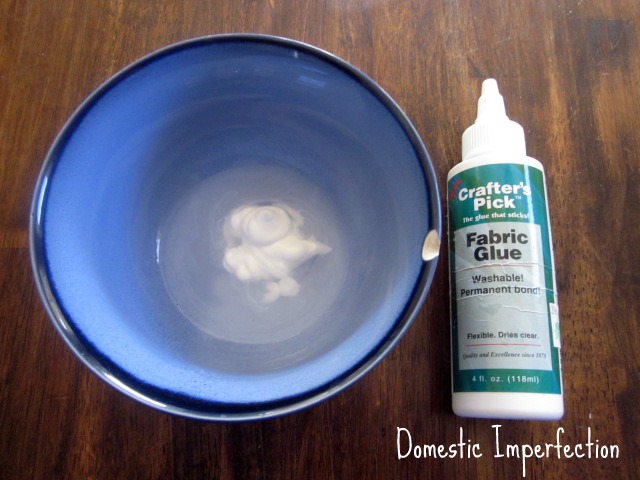 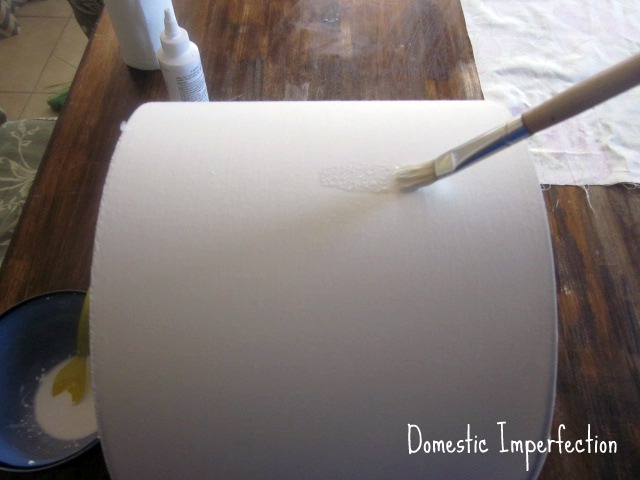 .
It actually worked perfectly! Next I applied the fabric, smoothed it out, and let dry. 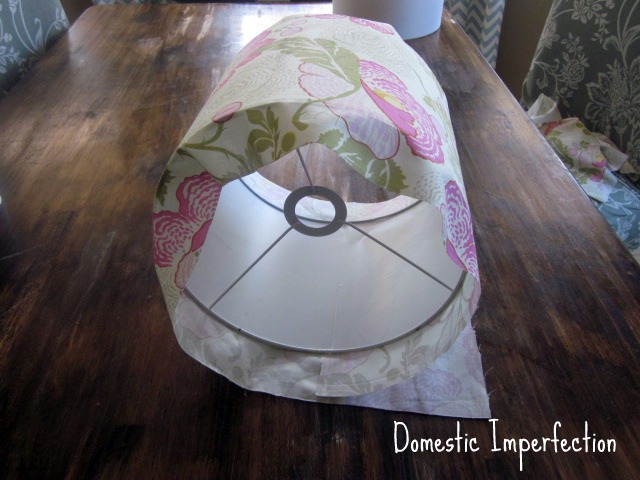 .
To give it a clean look I decided to forgo the trim and just wrap it around the back using -you guessed it- fabric glue. 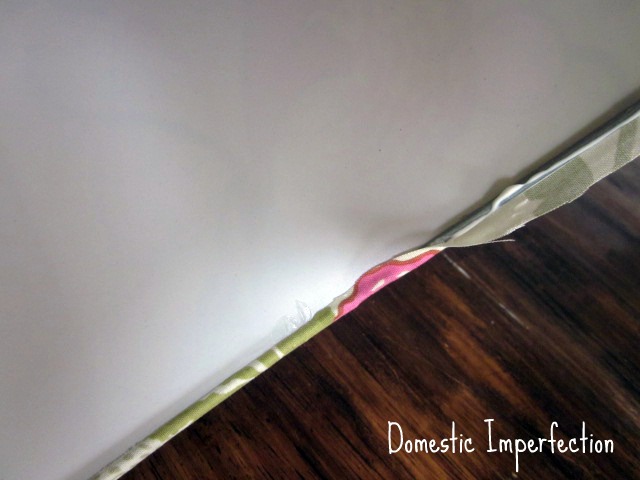 .
Here they are all finished. Next I had to go get the husband to hang then up for me (balancing on a bar stool at 38 weeks pregnant probably isn’t the best idea). 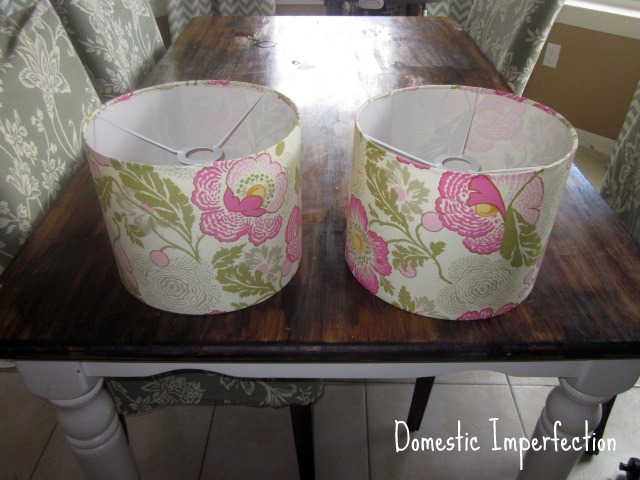 .
He took one look at them and commented on how much his grandma would like them. Evidently I should have gotten fabric approval before starting. Admittedly it’s not something I would have normally picked, but I wanted something fun, floral, and with some pink in it (to tie in the pink tree in the corner.)
(Here is the link to the fabric I choose, if your interested.)
.
Anyway, here they are all hung up!
To hang them, all  you have to do is remove the current globe and light bulb, put on the lampshade, and screw back in the bulb. Easy! 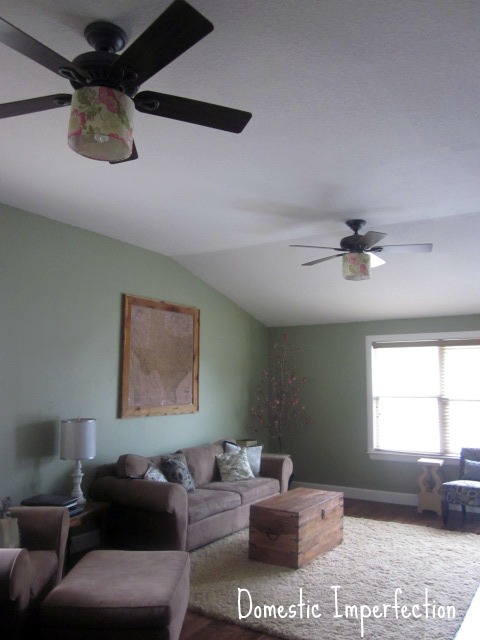 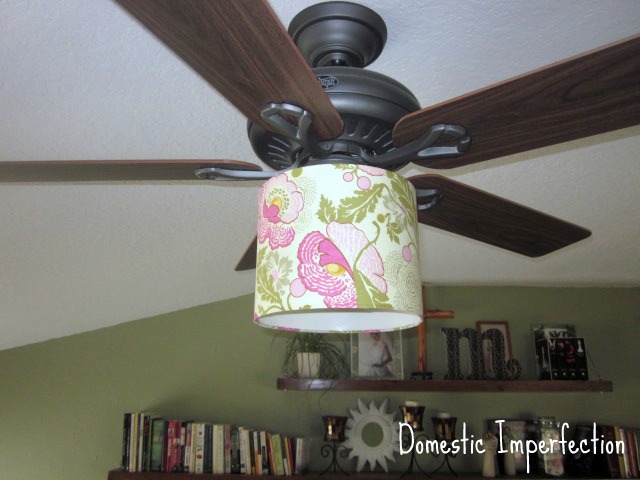 .
Here is what it looks like from directly underneath. You can see the bulb and all, but I don’t think it
looks bad. 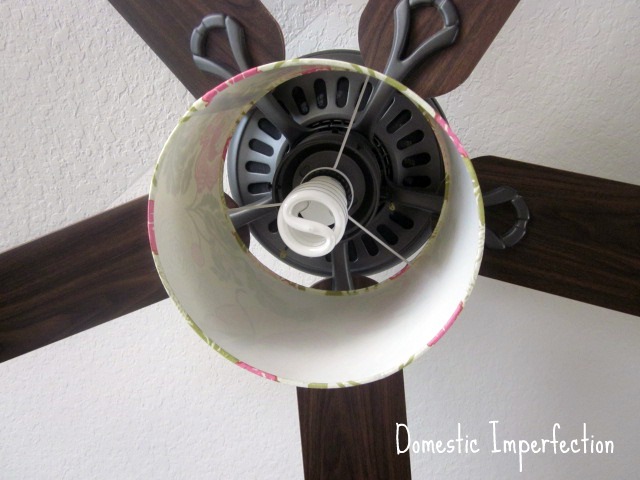 .
The husband cringes every time he looks at them…he says they’re way to grandma and girly. I say it’s okay to be overly feminine when directly behind them is a super rugged snakeskin. We’ll see how long they last, I may  still have to man then up a little. 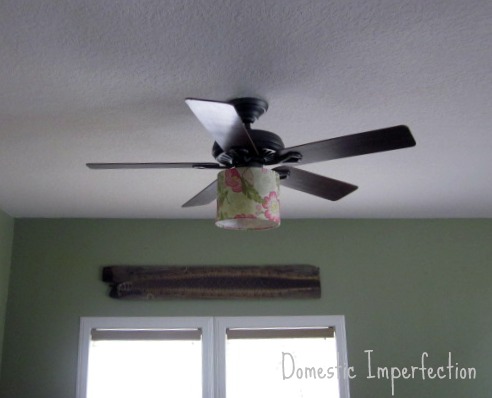 .
Update: I did end up switching them out…here is the link to the post about the process.
…and in case you don’t want to take the time to read a whole post about it, here are some pics :) 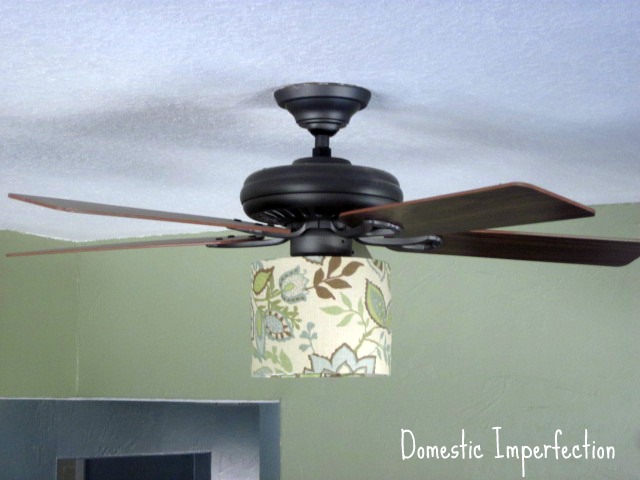 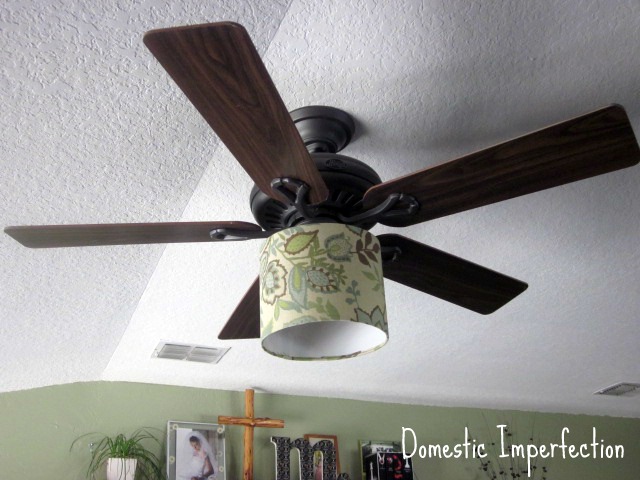 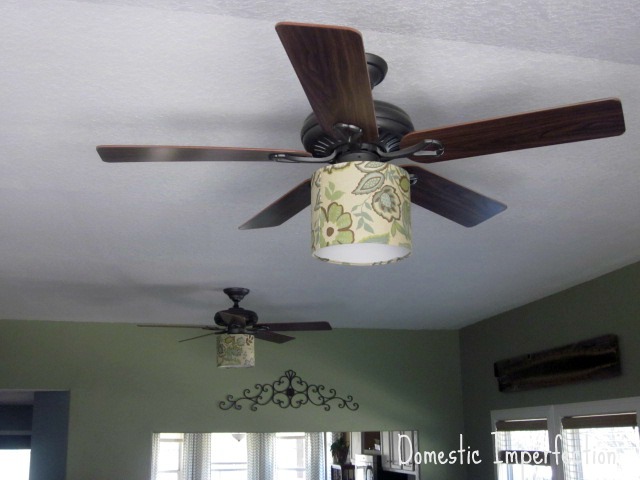