This isn’t one of those blog posts where I show a picture of a fugly piece of furniture and then a the beautiful after picture and say “ta-da, look what I did!” That’s not my style, so this is a straight up illustrated story.

It all began one day when I found a beat up end table at a estate sale for five bucks. I’ve been on the lookout for some tables for awhile, we need two for the living room and two for the master bedroom. Currently we are using extra chairs as nightstands in the bedroom. Classy, I know. Perhaps one day I’ll show y’all a picture when I get around to decorating the master bedroom.  Anyway, here’s the table. It’s in rough shape, but pretty sturdy. 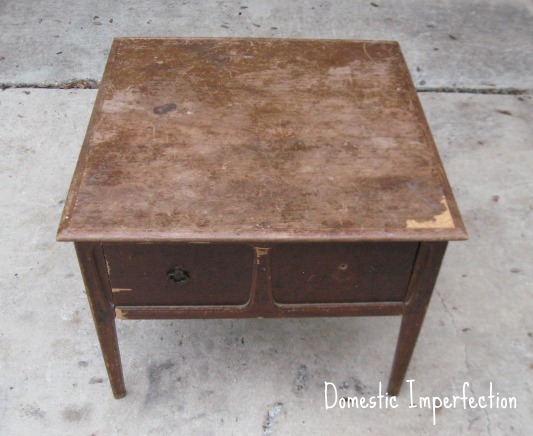 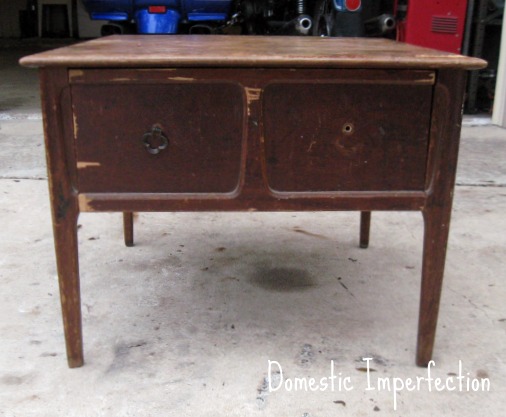 .
I decided pretty early on that I wanted to put some paintable wallpaper in the insets for some subtle texture. I bought a pre-pasted roll for about $11 bucks from Home Depot (or you can buy some on Amazon, they have a way better selection). I made a template out of computer paper, then traced it onto the wallpaper. 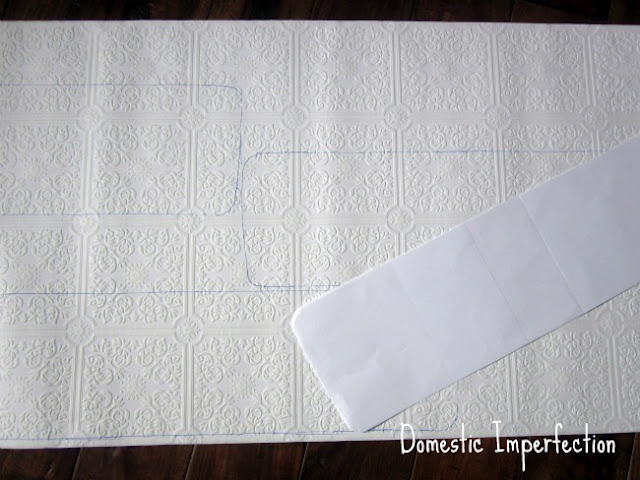 .
Since it was prepasted, I just wet it thoroughly and smoothed onto my table. I let it sit overnight, and in the morning it did this… 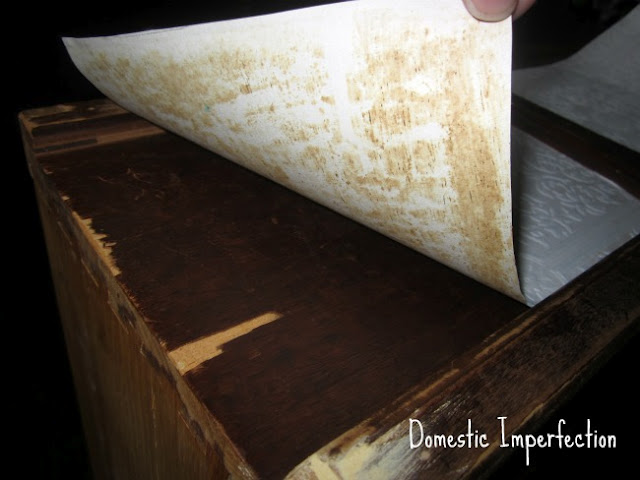 .
Totally did not stick…Mod Podge to the rescue! You can use this stuff for anything. 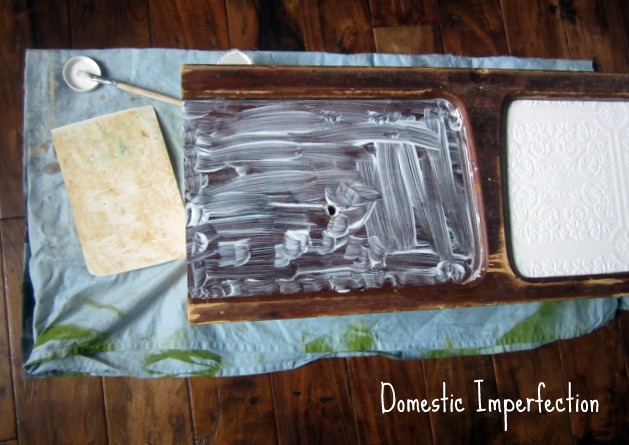 .
Next I set out to prime the table. I used spray primer because it wasn’t naptime and I had to be quick.
Also, if you don’t have one of these spray paint trigger things, go and get one. There like $3 and save your fingers. Gone are the days of cramped and permanently indented pointer fingers (then trying to use your thumb…anyone else?). 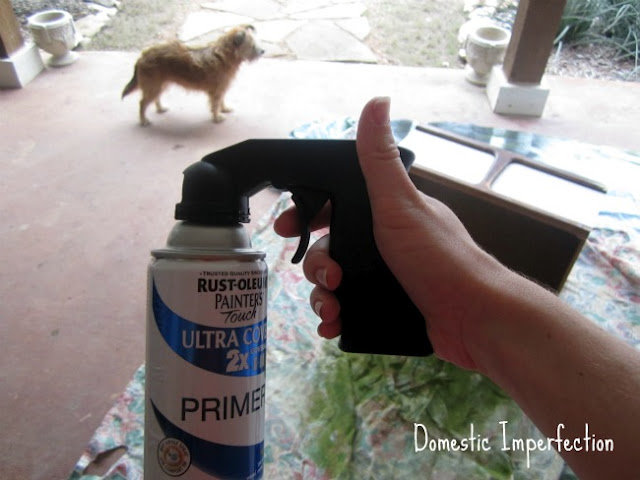 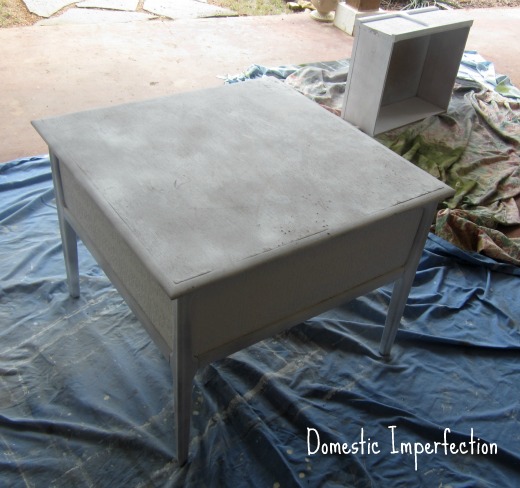 .
After priming I realized that the tiny gaps between the wallpaper and the table weren’t filling in, so I caulked them to perfection. 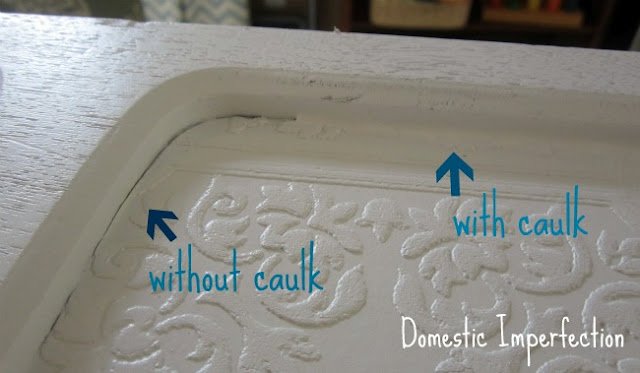 .
Another one of my favorite products….these little tubes of caulk. 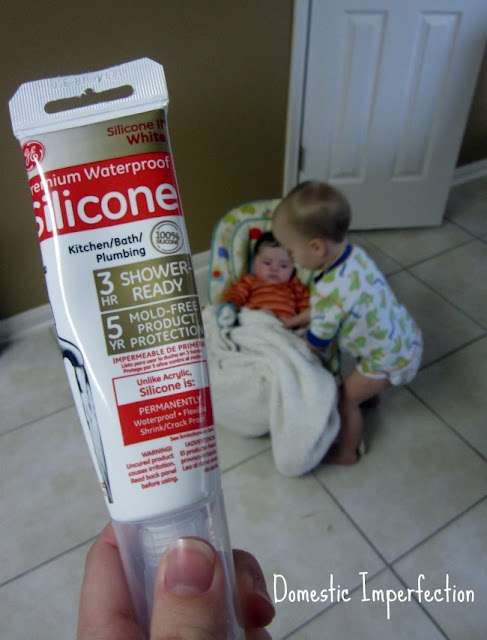 .
The big tubes of caulk just don’t cut it for little projects. They are messy and if you don’t use the whole giant tube (you won’t) then it always dries out and I end up having to throw them away. These little tubes are more expensive, but there clean and easy and never dry out. Which actually makes them cheaper, because you get to use the whole thing.
.
Back to my tale.
.
So I finished painting the table… 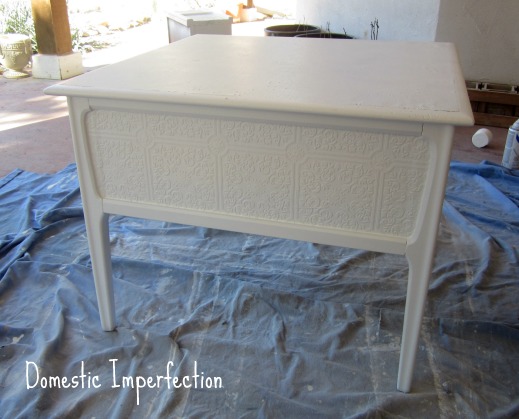 .
The top still looked wavy and dented and whatnot, so I knew I had to distresses it to make it look good crappy instead if bad crappy. Now I have never distressed anything before. Why would you want to? You taking something from looking terrible to awesome, and then ruin it? Actually I usually like the way other peoples distressing turns out, but I was way to scared to actually ruin something I worked so hard on. Free time is precious when you have small kids. I didn’t have a choice with this piece though, so I got out my sandpaper and started lightly sanding the corners. And you know what? Damned if I wasn’t enjoying myself. 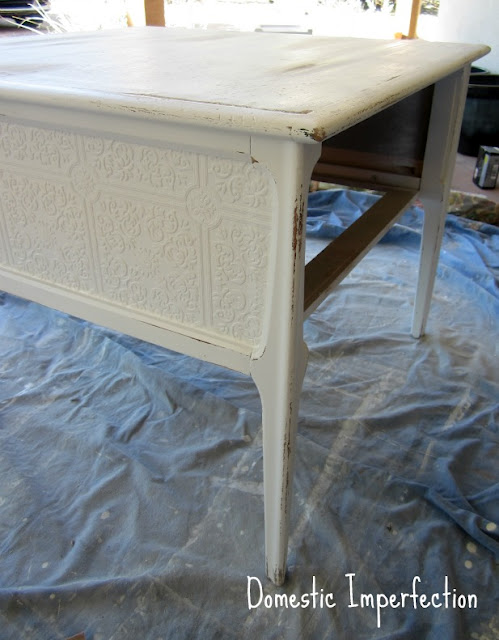 .
Elijah too…
(look at that weather….gotta love late December in South Texas.) 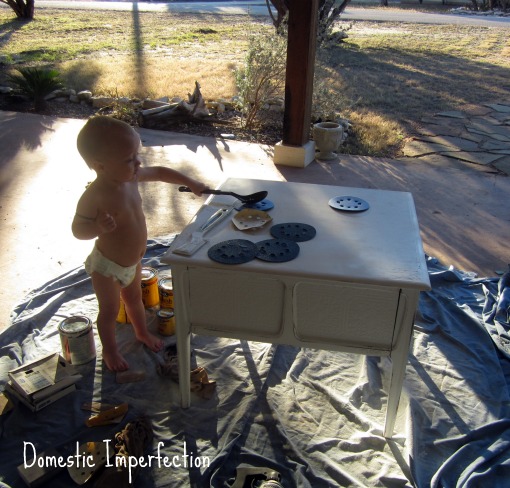 I wanted to make it look even more distressed so I got out some glaze to bring out the dents and scratches. I popped that puppy open and CRAP…it was clear. Bought the wrong kind. 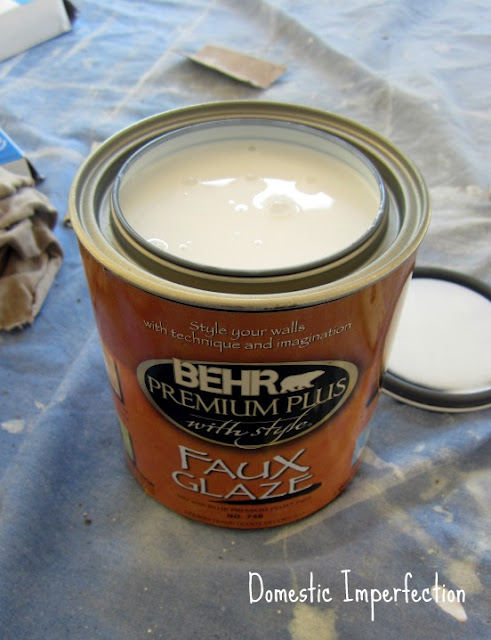 .
I live pretty far from…everything…so there was no way I was going back to the store. I decided to improvise and use stain. I rubbed it on and wiped it off with a damp rag as fast as possible.
Nope, didn’t work. Ruined it. 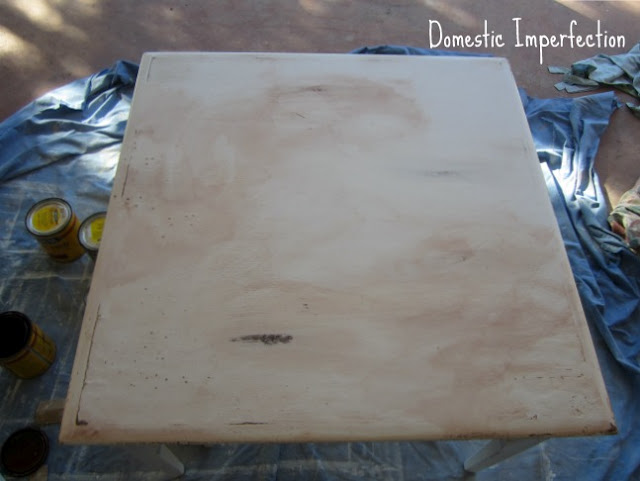 So I repainted it and re-distressed the top. Blah….it’s not quite as much fun the second time. Almost done though! All that was left was to add some knobs (picked them up for $2.50 a piece at Hobby Lobby) and slap a coat of polyurethane on. 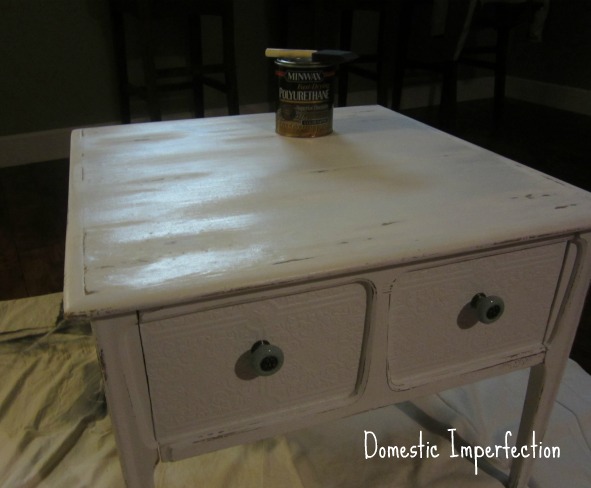 .
Here it is all finished! I’m really liking the distressed look…I just might do it more often. 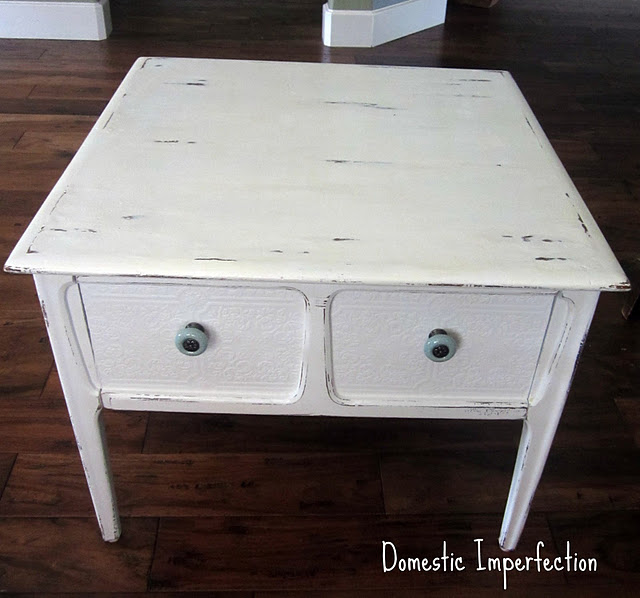 .
And some close up shots.. 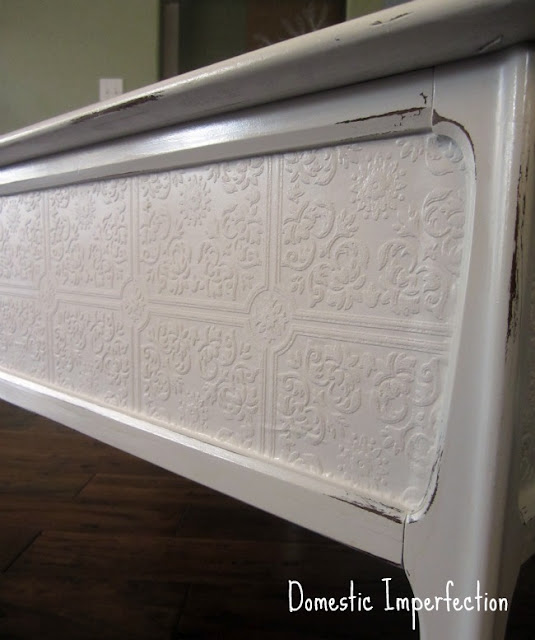 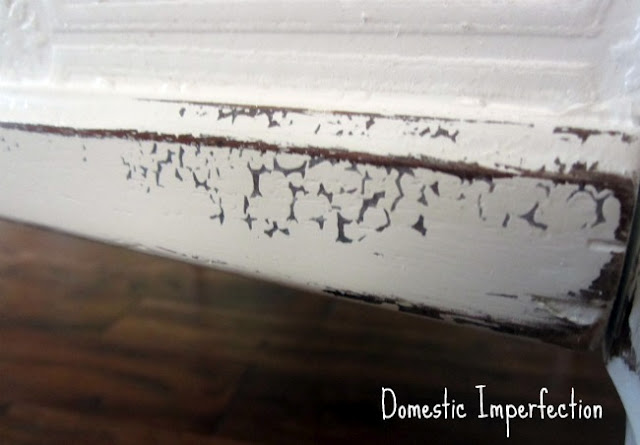 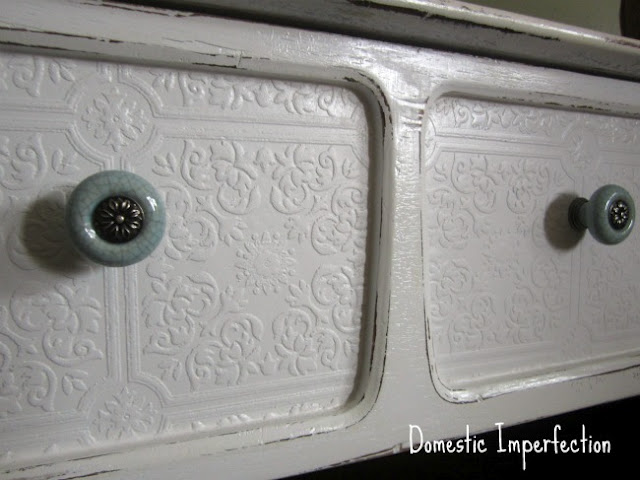 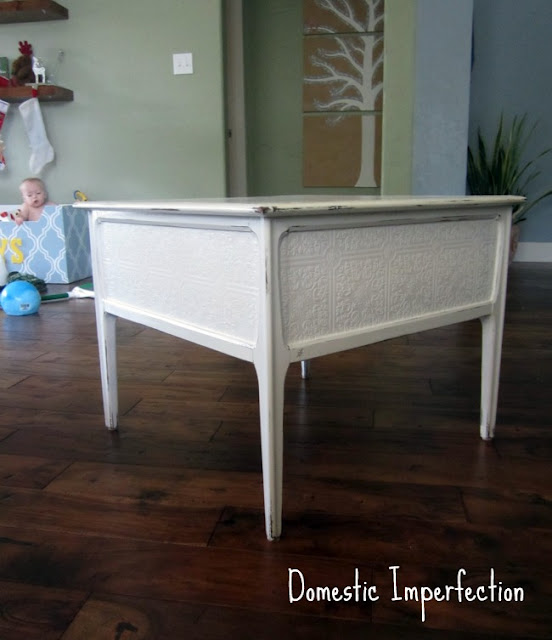 .
I decided that this table would look best in the living room (too big for a nightstand) so the current end table got moved to the bedroom, so now only Adam has a chair as a nightstand.
.
So here is the previous table…
(it and the lamp were both pre blog projects) 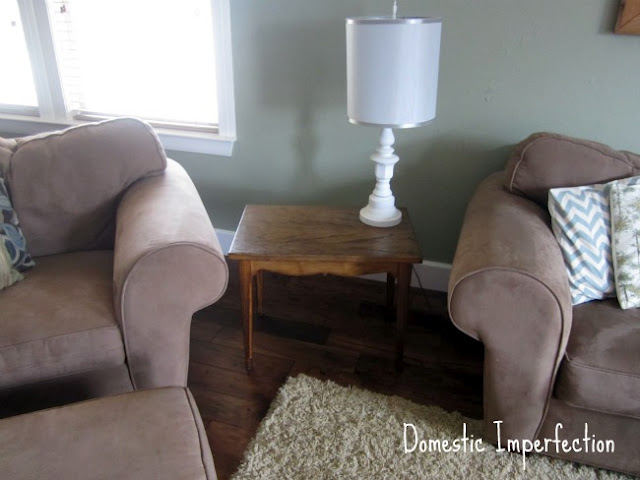 .
And here is the new one! I really like it, it brightens up the room a bunch. Sometimes I feel like I’m drowning in a sea of brown and tan. 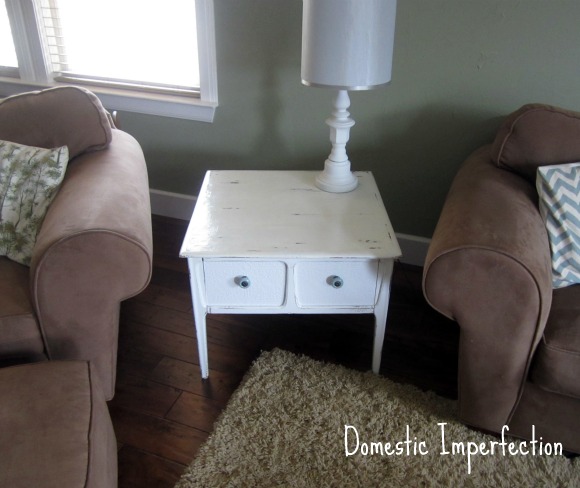 .
Total for the whole project was…
Table – $5
Wallpaper – used about a dollars worth
Spray primer – $3
Knobs – $5
Everything else I already had.
.
…and that is the tale of the crappy $5 table turned $14 awesome table.
.
The end.
.
PS…my husband doesn’t see it, but I feel like the table is staring at me…anyone else?

Looking for more furniture ideas? Check out THIS POST. 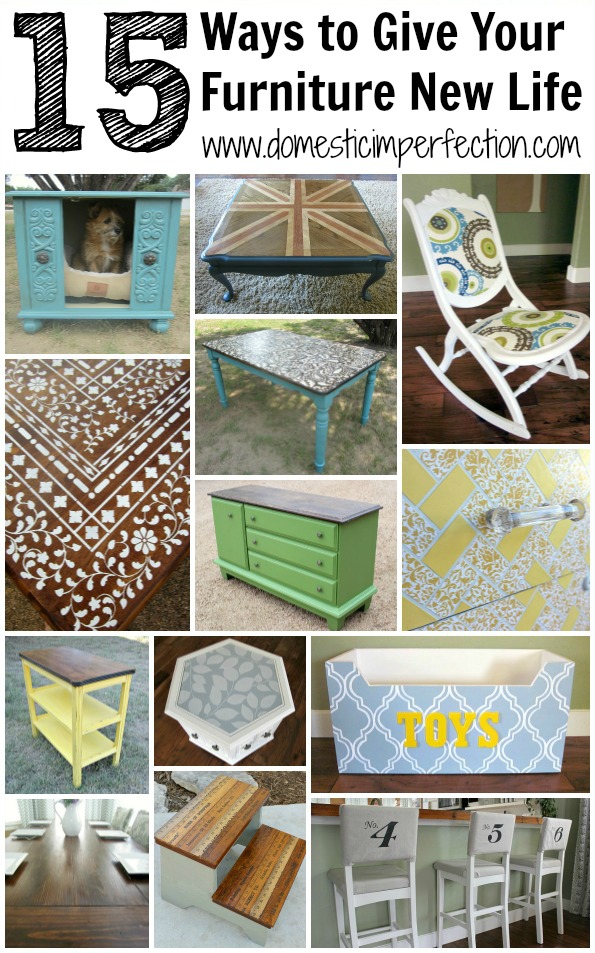