281shares
I’ve had quite a few questions about my sons cloth diapers, so I figured I’d just write a post about it. I’m no cloth diaper expert, but after 17 months I’ve found what works, what doesn’t, what I would recommend and what you should definitely NOT buy. So here we go!
.
When I first heard of cloth diapering I was like “people still do that?” It seemed outdated, nasty and troublesome. But it also sounded cheap….so I started to do more research. Let me tell you…there are about a million different ways to cloth diaper, and after a little bit of research my brain was swimming. I’m not going to go over all the different ways, but it ranges from old school flats and prefolds to diapers that are basically a disposable that you wash. Before Elijah was born I decided that since we are cloth diapering because we are cheap, we weren’t going to buy the expensive, ultra convenient diapers (though we did get a few as shower gifts). After much research I bought two dozen newborn cotton prefolds and a dozen size one Thirsties diaper covers. 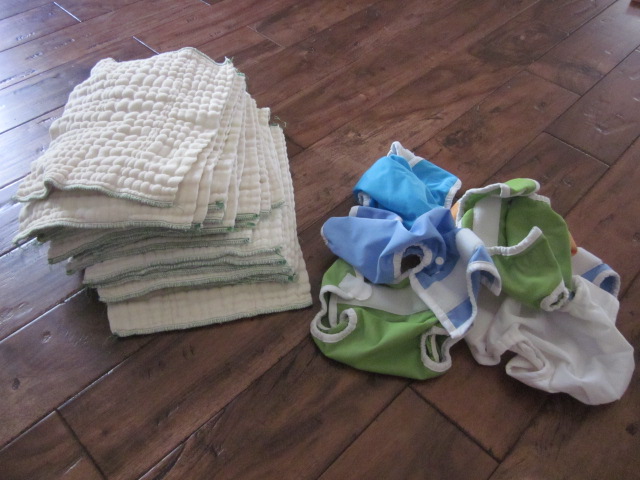 Basically, this is almost your grandmas way of doing things. You fold the prefold, which I did my folding in thirds and fanning out the corners to pin. Except that people don’t use pins anymore, thank goodness. There is this nifty thing called a Snappi now… 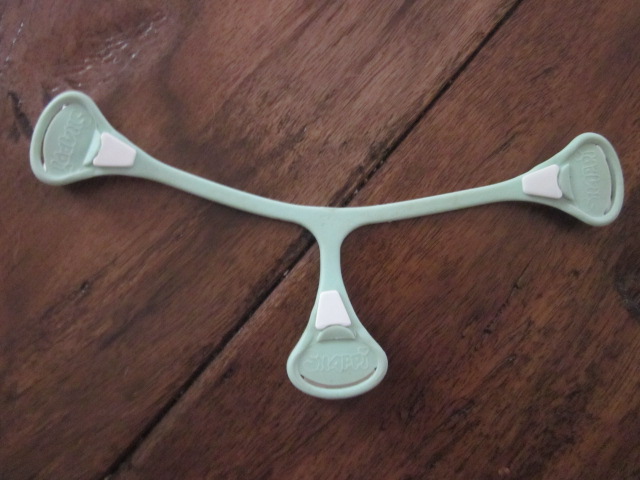 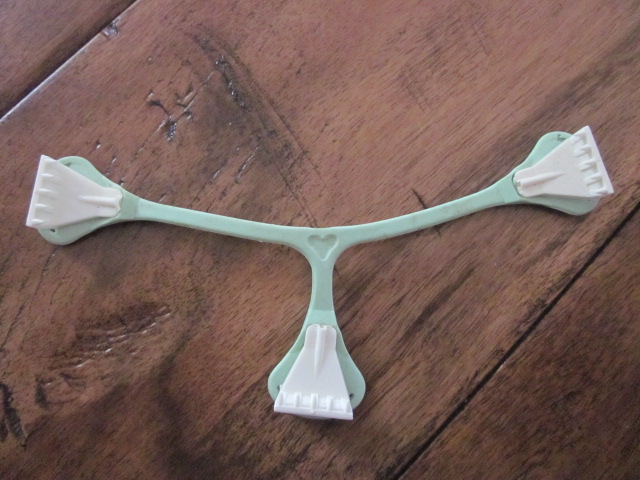 They are very much awesome. I couldn’t imagine using pins, especially on a wiggly older baby. So basically you just put on the prefold, snappi it, and then put on the cover (which goes on just like a disposable.) easy enough, right? Here is Elijah at 8 weeks in this type of diaper… 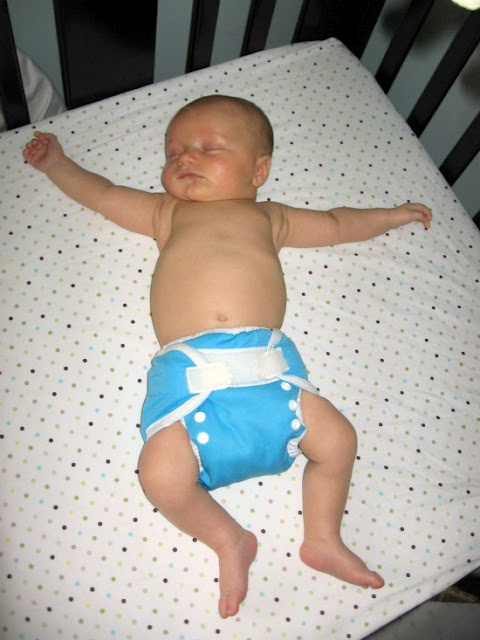 I did this for awhile, but when it came time to move him up to the next size I started looking for something different. My problem was that even though the diapers rarely leaked, I couldn’t keep all the runny breastmilk poo inside the prefold. It would always get on the cover, which means I couldn’t re-use it. Here is a helpful piece of advice…make sure that any diaper covers you buy have leg gussets. This is so so so important…if it wasn’t for the leg gussets I would have had poo explosions every time. My favorite kinds of covers are the Blueberry Coveralls and  the Thirsties Duo Wrap…there are lots more that would work fine too, those are just what I like. Anyway, back to my shopping. I started looking into fitted diapers…basically a diaper that is already in the correct shape (no folding) that you put under a cover. I was going to go with those until I stumbled upon the Workhorse diaper from Green Mountain diapers. They are prefold diapers that are sewn to resemble a fitted, but they have extra stuffing, cheaper, and have elastic around the legs. I was sold and ordered 18 of them. 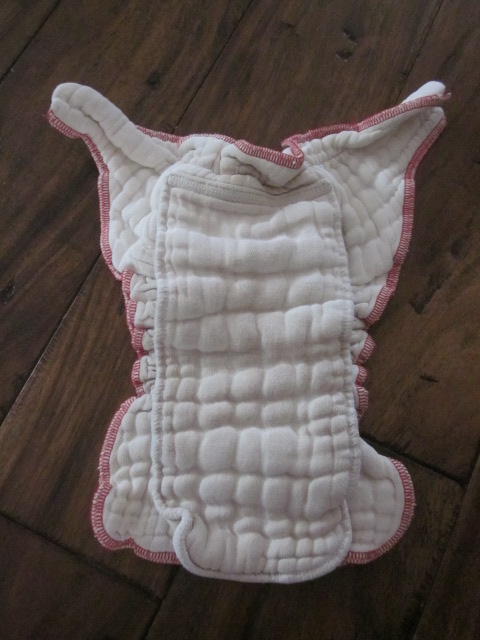 They are awesome. My son is a SUPER heavy wetter and they have never leaked. Poo has never escaped to get on the cover. I bought the ones without the snaps because I want them to last for all my kids and I already own plenty of Snappis. They have my official recommendation….and no, no one paid me to write this post (though that would have been fantastic!). Anyway, I do own a couple of the more convenient diapers, let me tell you about those. I have three BumGenius 3.0 pocket diapers and two 4.0’s that I got at my baby shower. Pocket diapers are basically a cover with a pocket that you “stuff” to make absorbent. Here is one put together and then laid out with all its pieces…. 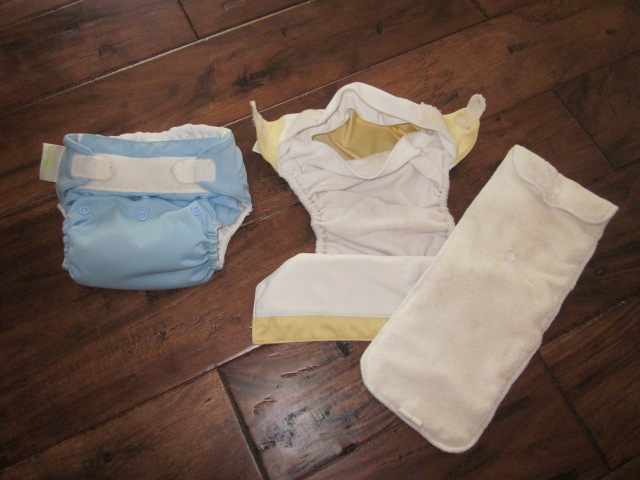 They are supposed to fit from newborn to potty training…they have an adjustable rise just like the diapers covers. The diapers covers though come in a size one and two with three settings in each size, so you do have to buy more than one set, but they fit really well. The pocket diapers fit well now, but as a newborn they were HUGE and he couldn’t really wear then till about his fourth month…but you only have to buy one set.
.
What I like about the pocket diapers is that they are easy to put on – these are the ones I reach for when the diaper change is a battle and I just want to get it over with. Also, its easier to get the poo off because there no crevices or folds on the inside of the diaper. Things I don’t like 1) you can only use then once before a wash since the cover is connected.  2) They leak. I can’t put him down for a nap in a pocket or the crib ends up wet, certainly wouldn’t consider using this as an overnight diaper. 3) Price 4) Now that he is older, they are really easy for him to take off. You know what that means…one day you will go to get your little angel up from their nap and there will be poo everywhere.
.
There is an easy solution to this. Listen carefully, this is the best piece of advice in this whole post. ALWAYS BUY DIAPERS WITH SNAPS! Always. Covers, pockets, all in ones, whatever…BUY THE SNAPS! They are just as easy to put on as the velcro, don’t wear out in the wash, and you kid won’t be able to take them off. Here is a close up of the BumGenuis 4.0 (with snaps!) in action… 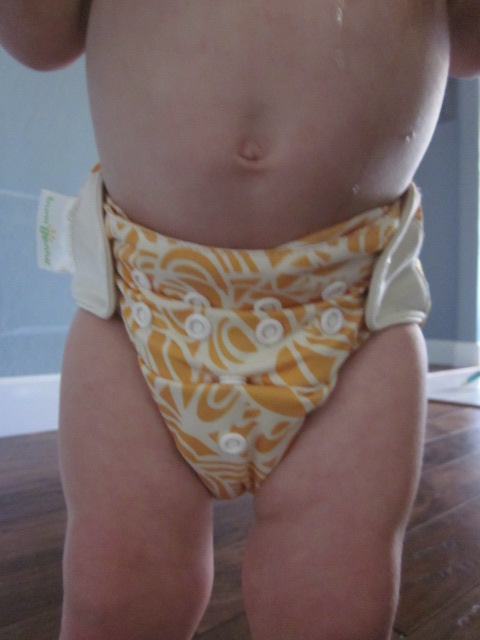 Like the drool?
.
Now for the burning question that everyone has….what do you do with the poo? Well, you put it in the toilet. You can do this one of two ways 1) swish the diaper around in the toilet or 2) buy a diaper sprayer. Let me give you a hint…you should pick door number two. You just hook it up to your toilets water supply, hang it from the tank, and spray off the diaper, no poo-touching required. Then you throw it into your diaper pail (basically a trash can with a lid and liner) until its time to wash them. Pee diapers can go directly into the pail. Here is my diaper pail…its just a trash can from target. 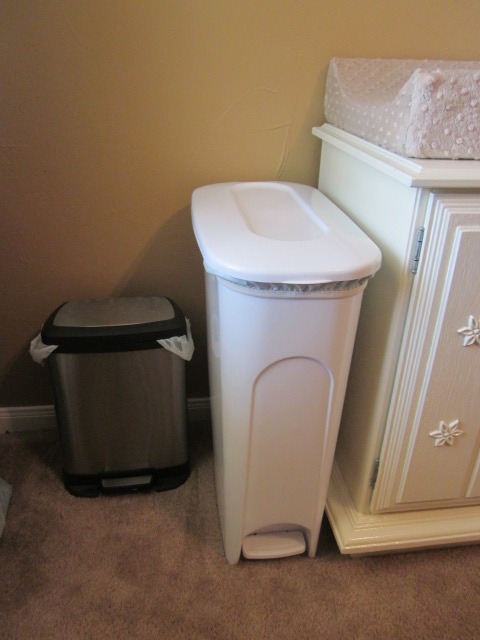 While I’m thinking of it, here is my whole changing station… 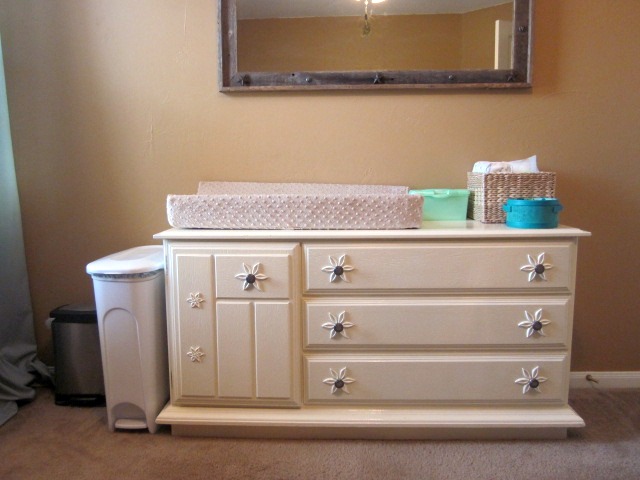 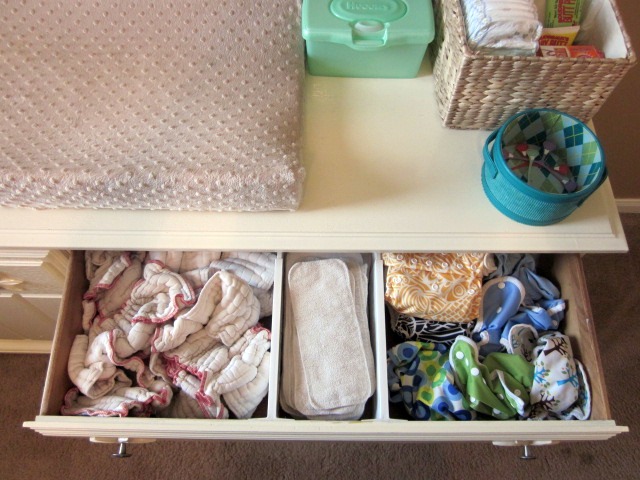 The middle section is for doublers and the newborn inserts from the pocket diapers….I always add a doubler for nighttime diapers.
What else? Oh, washing. I wash about every other day. I throw everything in the washer, including the pail liner. I do a cold rinse with no detergent, then a hot cycle with detergent, then a warm cycle without detergent. It seems like a lot of cycles, and if you want to skip the last rinse I’m sure that would be okay. As far as detergent, you can’t use what you use for your clothes, you have to use a detergent that rinses clean or else you diapers will get build up and become water (pee) repellent. There’s lots of options, I use Country Save. It’s about $10 a box and I’m still using the SAME BOX that I originally bought and still have about 1/3 left. As in Elijah might be potty trained before I finish the box. Not bad, huh? You only use a tiny bit per load, perhaps a tablespoon or so. As far as drying them, I pull out the covers and pail liner to let them air dry (if I remember) and dry the rest in the dryer. You can also line dry them, that would be free, plus the sunlight bleaches out any stains.
.
Now lets do a budget breakdown to see how much cloth diapers will save you over disposables. This is in no way official math, I’m just going to use guesstimates and nice round numbers…
.
If I honestly sit down and think about it, I have probably spent around $400 on cloth diapers, including the pail, liners, sprayer and all accessories. You could probably spend less if you pick something and stick with it, but I’ve made a few trial and error purchases. Now remember, that $400 will last you through all your kids, you won’t ever have to buy anymore (unless you want too). As far as the extra cost of water and electric, I’ll guesstimate that to be about $8 a month. So $96 a year. Lets say the average kid is potty-trained by age 3 (even though cloth babies usually train earlier and easier that disposable babies-added bonus!). So $288 for newborn to potty trained…plus we can’t forget that $10 for detergent….$298. So I will spend $698 total to diaper Elijah with cloth diapers.
.
Now lets add up what it would be with disposables. I wouldn’t have bought fancy diapers so we’ll use the price of cheaper Costco diapers (which are awesome, I use them when we travel.) Lets say the average box is 200 diapers for $40 (it varies by size). That’s about 20 cents a diaper. At eight diaper changes a day that’s $1.60 per day times 365 days a year = $584 a year times three years = $1752 to disposable diaper a baby. (If you buy cheap diapers!)
.
So it’s a little over $1000 cheaper to cloth diaper a baby. But wait, that’s if you only have one kid. I would like to have four kids! Lets take the $400 I originally spent on cloth diapers plus $298 (for utilities) times four = $1592 to cloth diaper my four kids. Disposables would cost me $7008 for four kids. That’s a total saving of $5416!
.
There is a ton of information that I didn’t cover in this post – if you have any questions just leave them in a comment below and I’ll be sure to get back to you. Make sure you leave your e-mail address in the comment as well so that I have a way to contact you!

« Dumpster Rocker
$100 Porch Project: And Then There Were Three »